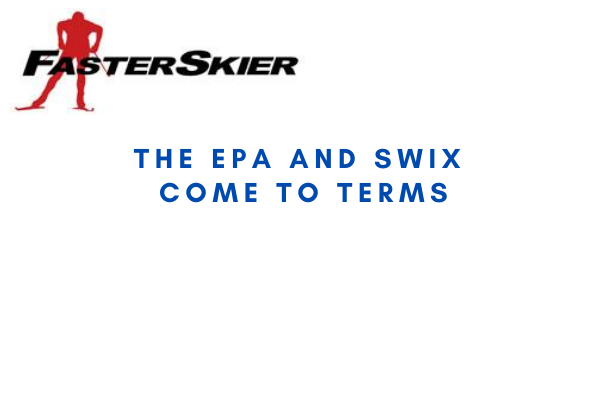 Keen on speed and the full complement of waxes to juice the skis? Then you’ve likely noticed the “full complement” has become markedly reduced in recent years when considering perfluorinated products. Further, PFOAs or C8 (eight chain) fluoro compounds were effectively banned in the EU as of July 4, and are no longer available for most uses in the U.S., including ski wax. Older waxes formulated with C8 are considered the most effective at repelling water and dirt. Several wax companies still sell C6 perfluorinated wax, while some claim to have gone totally fluoro-free with their 2020-2021 product lines.

In the fall of 2018, skiers first began noticing a lack of Swix and Toko perfluorinated product on ski store shelves. (Toko is owned by Swix.) We reported on that here. Long story short, the U.S. Environmental Protection Agency (EPA) and the U.S. subsidiary of Swix Sport tangoed. The EPA claimed Swix was in violation of the TSCA, the Toxic Substances Control Act . In other words, Swix imported substances not on the TSCA inventory of permitted chemicals “or otherwise exempt for commercial purposes”.

This May, the EPA released its final ruling against Swix Sport USA. Without delineating all the violations in what the EPA calls the “Final Order of Consent”, Swix violated the TSCA Premanufacturing Notice protocols and Import Certification guidelines on 83 instances. Those missteps occurred in 2013, 2015, 2017, and 2018.

The terms of the settlement require Swix to pay a fine of $375,625 dollars. Swix is also required to spend $1 million dollars on what is referred to as the RWP or “Responsible Waxing Program”. According to the EPA, the RWP will address the following:

The RWP roll out from SWIX should come this fall. It will include assets like on-site and online training for wax-techs and coaches at all levels of competitive skiing. The RWP resources are mandated to include information regarding proper use of PPE when waxing, best ventilation practices, and methods to properly dispose of wax shavings.

“This is not new for us,” Swix CEO Steve Poulin said. “We have always had personal protective equipment and we have always shared our best practices for waxing safely. We have been a leader in PPE for many years.”

Swix is also responsible for helping wean ski racers off of PFAS-containing products at the high school level and they must appoint a manager for the RWP and fulfill the settlement terms no later than September, 1, 2022.

“Swix, as part of its settlement with the U.S. Environmental Protection Agency, will produce numerous educational materials, including a Responsible Wax Program,” Swix said in a statement to FasterSkier. “These education materials are in production and will roll out over the next 18 months. EPA set forth the content of the educational materials in the settlement agreement. Swix will follow their directives in creating the content.”

What does this all mean for the consumer?

Wax shelves certainly will be different when it comes to Swix and Toko products. Those two manufacturers appear to have moved away from selling and distributing any fluorinated product in the U.S. Other companies still sell and/or distribute compliant fluorinated wax. And at least for U.S. Ski & Snowboard and Nordiq Canada sanctioned events, this season should play out as fluoro-free. Those rules are still in development. The masters racing scene appears to remain less regulated in terms of using and testing for fluoros. We’ll know more as the season approaches.

We contacted Swix USA and the EPA to get their respective comments on the ruling. One aspect of the agreement we asked the EPA about is that the RWP may be a golden branding opportunity for Swix. The production of the RWP may in fact give Swix a competitive advantage over other domestic wax manufacturers and importers as Swix can include brand specific product placements and references.

First we present the Q & A exchange with the EPA. That’s followed by the Swix Q & A. All FasterSkier questions are in bold text.

FasterSkier and the EPA

FasterSkier: In this case Swix is the violator in question. The EPA has given permission in the ruling for Swix to produce/create a program called the “Responsible Waxing Project” to educate the community on best practices for handling waxes etc. and “educating the ski racing community about the existence of PFAS chemicals in racing waxes; the physical and chemical properties of PFAS substances; and how they impact the environment;” Further it states…”SWIX shall be responsible for all aspects of RWP development and implementation, including the development of all education and training materials across a wide variety of communication platforms (including on-line communication modules, videos, visual presentations, brochures, posters, and other materials).”

I’m curious why the EPA tasked Swix to produce and curate this material as they are the party being penalized for non-TSCA compliance?

EPA: EPA affirmatively required SWIX to develop and implement a “Responsible Waxing Project” to educate the ski racing community about the dangers of polyfluoroalkyl substances (PFAS) in racing waxes and in particular to promote the use PFAS-free alternatives. This mandatory program is in addition to the penalty assessed for SWIX’s violations of TSCA, and requires the company perform a project that will help to mitigate the harm that resulted from SWIX’s violations.

FasterSkier: Why not an independent third party to produce the content and curate the program?

EPA: EPA determined that it was most appropriate to require SWIX to itself develop the compliance promotion program materials.

FasterSkier: How does the EPA ensure the material is not a branding opportunity for Swix specific product?

EPA: The settlement’s requirements for the content and materials of the RWP are very specific and detailed regarding the design and content of the program to teach technicians, coaches and skiers how to prevent having PFAS contamination get into the soil as well as to prevent PFAS exposure to people, and to discourage the use of PFAS-containing waxes.

FasterSkier: I’m referencing this statement from paragraph 36: “Respondent is authorized to return to its parent company in Norway the existing stocks of products containing Chemicals A, B, C. D, E and F in its control on the date of Respondent’s signature on this CAFO, provided such return conforms with all applicable laws. Any existing stocks must be exported within ninety (90) days from the Effective Date the date that payment of the penalty is due under paragraph 30 and Respondent shall notify EPA by sending documentation of the export, such as a shipping document (bill of lading), with the following certification to Tony Ellis at Ellis.Tony@epa.gov:”

It appears Swix must return its stock of violating product to Norway. Much of this product is likely available via the commercial market — vendors and personal users have back stock. Why did the EPA choose not to ask Swix to “buy back” the product in question or incentivize Swix to get the material in question back from vendors and citizen users?

EPA: As part of Swix’s actions to comply with TSCA, it immediately halted distribution (July 16, 2018) and held these products containing the illegal substances in its warehouses. This provision allows Swix to return those stocks to Norway.

FasterSkier: This appears to be an EPA enforcement action. And Swix, I think, must self-report every six months about the progress of the RPW and self-audit how it has met the EPA’s requirements regarding the penalty phase. That said, the RPW may in fact give Swix a competitive advantage in the marketplace as it alone is tasked with producing/disseminating the RPW material.

If Swix fails to meet the marketing obligations of the RPW as laid out by the decision, can the EPA discuss legal implications if Swix does not deliver?

EPA: The Consent Order retains a penalty provision designed for noncompliance with the RPW. If EPA is not satisfied with the performance, Swix must pay the US Government $655,000. See ORDER at page 9 item 24.q

Swix: The safety requirements for handling and using the wax are dictated by OSHA. All the waxes have Safety Data Sheets (SDS), which provide information on safe handling and use. Under OSHA, the SDS are provided to the wax technicians. Swix is not creating new protocols or best safety practices. It is providing enhanced training and educational materials to ensure that technicians using the wax are following the existing safety requirements. This is part of being a good product steward.

SWIX is the industry leader in product stewardship. EPA determined that an educational program to enhance existing safety protocols for technicians is an important part of the Responsible Wax Program and required it under the settlement.

Over its many decades in business, the Swix team of scientists, product developers and world-class ski technicians have explored the science of wax and refined the best practices for waxing safely. Swix consults routinely with skiing’s top governing bodies to ensure that the information it supplies on its website and in its seminars comports with the best available technology, science and safety available.

FasterSkier: Do you have an expert? Who are you consulting with?

Swix: Swix consults with experts all the time, particularly when designing and recommending personal protective equipment.

Several years ago, Swix began a project with Norwegian Occupational Health Authorities (STAMI) to investigate the particle exposure of the occupational environment during ski waxing. Swix was a project partner and supported the project with products and knowledge of ski waxing methodology. We, in turn, learned detailed information on airborne wax particle sizes and concentration levels. The project report also gave Swix clear recommendations on PPE and filter specifications.

FasterSkier: Swix is saying their new wax is safe. How do you know?

FasterSkier: How do you know five years down the line that it’s going to be safe?

FasterSkier: What sort of protocol does Swix have in place now to ensure that it remains in compliance with TSCA?

Swix: Swix has new procedures and processes in place for TSCA compliance, including procedures to review and verify compliance for all chemical substances in our products.

In addition, Brav, the parent company of Swix, in January revamped its compliancy protocols across all brands and companies. The company has a robust compliance department as well as sustainability and ethics statements. All company executives convened in Norway earlier this year to review the protocols.

Nordic Nation: The Ups and Downs of Trail Design with John Morton