Last month, CAS made a binding decision on the case that received widespread condemnation from clean sport advocates and applause from within much of the Russian sports community. The cliff notes version of the Dec. 17 ruling halved the penalty from four to two years for Russia. WADA had sought a four-year ban from major international competitions (Olympics and World Championships for Russia).

In clear language, CAS found RUSADA to have manipulated data handed over to WADA as part of its conditional reinstatement as a compliant anti-doping agency. CAS found the data handed over to be manipulated. That much was clear. CAS also made crystal clear back in December that RUSADA had violated the terms of its reinstatement. CAS still ruled to halve the penalty. At the time, no detailed reasoning regarding the reduced penalty was forthcoming.

Russian athletes can participate in the Olympics and World Championships in the next two years, yet wearing uniforms with a modified logo. If the word “Russia” appears on the uniform, then the words “neutral athlete” must also be displayed in English.

Hand-slap is one way of describing global headlines regarding the release of the full ruling.

The New York Times: Three Judges Endorsed Penalties for Russia’s Doping. Then They Cut the Ban in Half.

The Telegraph: Backlash against CAS as full ruling on halving of Russia ban published.

WADA released a statement on January 14 commenting on the full release of the CAS decision – WADA’s disappointment was palpable.

“The full CAS reasoned decision shows clearly that WADA successfully proved its case and exposed the Russian authorities’ brazen attempts to manipulate data from the Moscow Laboratory in an effort to thwart our investigations,” said WADA President Witold Bańka. “We are satisfied that this landmark decision also upholds the strong investigative and legal framework put in place by WADA in recent years that underpins the anti-doping system. In particular, the investigative powers WADA was belatedly granted and the introduction of the Compliance Standard in 2018 have proven to be game changers.

“We remain disappointed, however, that CAS did not agree with all of our proposed consequences, which we felt were proportionate to the egregious nature of the offences committed by the Russian authorities as they sought to cover up the details of their institutionalized doping scheme.”

In its statement, WADA also posted a legal note which details it’s course of action since the Sochi-doping affair became public, and the recent CAS decision.

The CAS ruling is a dense 186-page document. However, WADA and others have pulled key portions of the document to illustrate how egregious CAS found RUSADA actions regarding the Moscow Laboratory data.

The lab data was originally handed over to WADA in January of 2019. After discovering the data was doctored, WADA asked RUSADA for new data in October 2019. The recent CAS ruling stated, “That New Data also had dubious authenticity.”

U.S. Biathlete Clare Egan was stark in her assessment of the ruling and stated via Twitter, “It’s impossible to understand why CAS didn’t uphold the ban when they upheld the facts of the case. CAS needs an overhaul.” 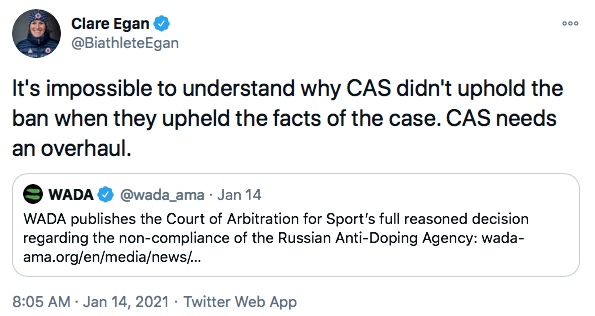 In the ruling, a section titled “Proportionality” stands out. In a legal context, proportionality is the tenet that the punishment should fit the crime. “The Panel bears firmly in mind at all times the paramount need to consider notions of proportionality in the imposition of Signatory Consequences,” states the CAS ruling.

The language throughout the ruling is stark in its incriminating tone when referring to RUSADA’s deeds. The Sochi doping case is well-documented. The misdeeds of the Russian authorities are well documented as they danced with WADA seeking to meet the conditions for reinstatement.

The penalties handed down might appear, in light of the evidence, disproportionate in Russia’s favor.

Of note was a section on punishment and Russia’s participation in the Youth Olympic Games.

“Although the history of improper conduct which has ultimately led to these proceedings is long and serious, the Panel considers it would be disproportionate to impose severe restrictions on the next generation of Russian athletes. In particular, as the doping schemes addressed in the McLaren Reports occurred between 2012 and 2016, the Panel considers it very unlikely that any athletes who will be participating in the Youth Olympic Games were involved in those schemes,” wrote the CAS panel in paragraph 731.

If recent news reports from Russia are accurate, the panel’s reasoning might be spurious. In early January, multiple news agencies reported that 33 athletes at a junior biathlon competition in Russia withdrew from the competition when anti-doping authorities arrived to test athletes. The RBU, or Russian Biathlon Union, claims it is investigating.

Tucked Away with a Cross-Country Boom in the Methow Valley