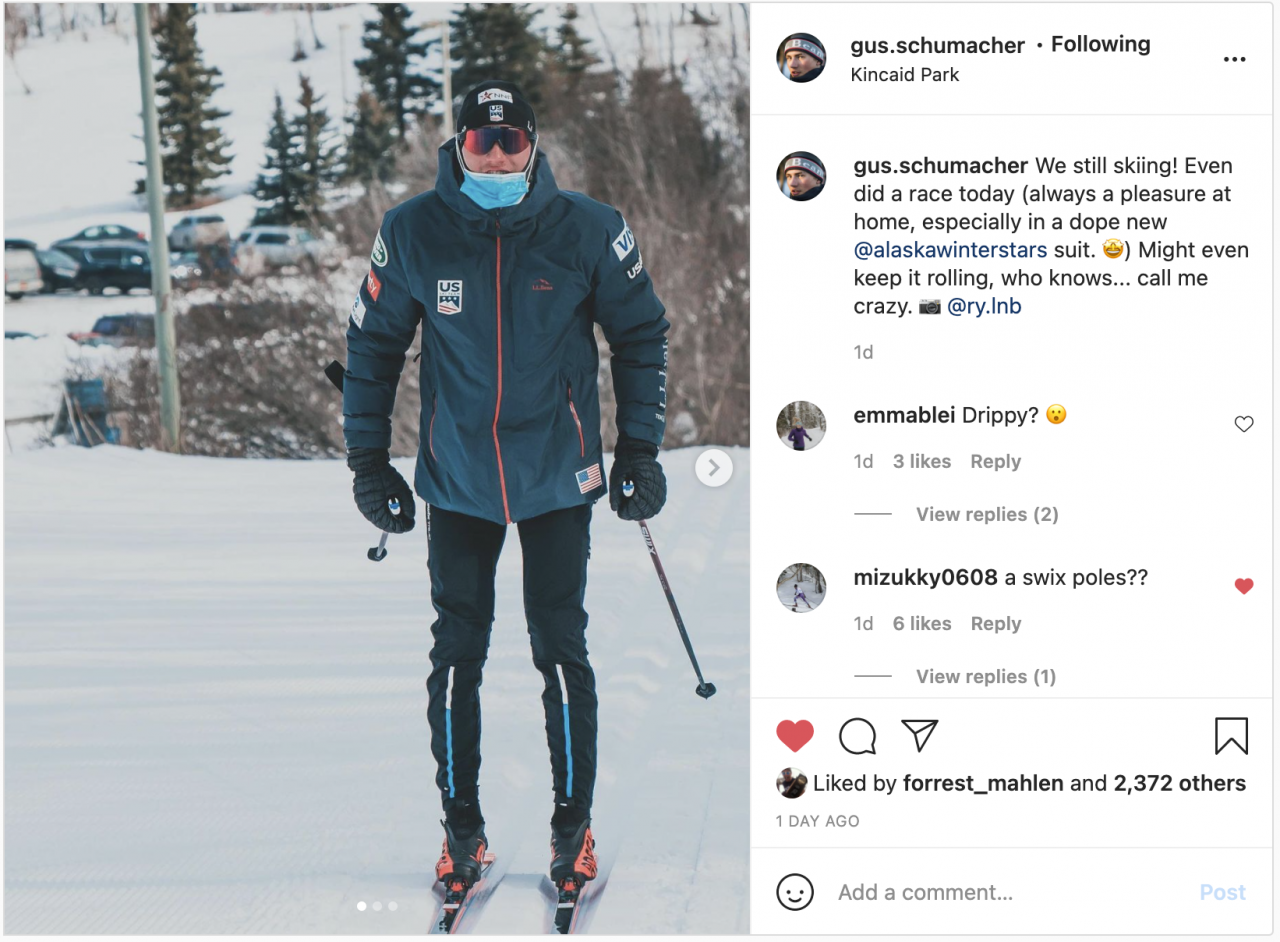 ANCHORAGE — The calendar said April, but the thermometer said January, as a small but well-credentialed field of athletes competed in a pair of FIS races at Anchorage’s Kincaid Park over the weekend. The April 10 and 11 events appear to have been among the latest FIS races held in this country in the past 30 years.

Saturday morning in Anchorage dawned clear and cold. Anchorage broke its all-time temperature record for April 10 with a 5° F (-15 C) reading at the official weather station, just a few miles east of the venue, around dawn. By the time the race came around, technical delegate Matt Pauli annotated the results with an official air temperature of -10 C, snow temp of -12 C. It had snowed a few inches the day before. It did not feel particularly vernal.

While conditions evoked mid-winter, athletes’ training regimens did not. Within the week leading up to race day, a brief survey of social media reveals, roughly half the pro skiers in the field went crust skiing; Scott Patterson went backcountry skiing; and Hailey Swirbul, Hunter Wonders, and Chip Schoff completed the Eklutna Traverse, a classic local mountaineering route, over four days. Oh, and Gus Schumacher, JC Schoonmaker, and Finn O’Connell logged a 200-kilometer, 10-hour day on Wednesday, before gorging on Moose’s Tooth pizzas at the edge of the Kincaid parking lot. Travel on Monday, intervals on Tuesday, race prep on Friday, this was not.

The mountaineering trip seems to have been fine training, as both Wonders and Swirbul won their races on Saturday. In the men’s 10-kilometer interval-start classic race, Wonders posted the fastest time in a field of 25 athletes, 25:02.2, to take the narrow victory. Patterson (+.8) and Schumacher (+14.1) were not far behind.

In the women’s 5 k interval-start classic race, held over one lap of the men’s course (aka the Junior Nationals distance course, for any readers who raced at Kincaid in March 2019), Swirbul started first in the reverse-seeded field and set the fastest time in a field of 17, 14:20.6, by a substantial margin. Hannah Halvorsen (+41.9) was second, with Tuva Bygrave third (+46.5).

Wonders, Patterson, Swirbul, and Halvorsen ski domestically for Alaska Pacific University, or APU. Schumacher skis for Alaska Winter Stars. Bygrave skis for University of Alaska Anchorage, or UAA. All podium finishers save Halvorsen competed at this year’s World Championships in Obsterdorf, and all save Bygrave are on the U.S. Ski Team (Bygrave has Australian and Norwegian citizenship). It was a well-credentialed field.

Relatedly, the winner of the men’s race each day recorded a 22.76-point FIS race, making these, mathematically speaking, by far the most competitive races of all the FIS races held in the country this year. (Lower points are better. For perspective, the deepest races at 2020 U.S. Nationals were only good for 26.70 FIS points for the winner.)

In the women’s 10 k interval start (two laps of Saturday’s course), UAA athlete Astrid Stav set the pace in 26:42. She was followed by Anna Darnell of APU (+18.6) and UAA teammate Bygrave (+1.00.7). Stav was second in the distance skate race at this year’s NCAA Championships in New Hampshire.

In the men’s 15 k interval start (three laps of the same course), Patterson paced a field of redoubtable distance skiers with the day’s best time of 33:26.5. He was followed by Schumacher (+27.7) and David Norris (+1.10.6) in second and third. All three athletes have been on a national championship or SuperTour podium in this event.

The weekend’s FIS races capped a domestic race season that, like many aspects of life over the past year, has had high highs and low lows. In Alaska, highs included race skis-good trails at sea level for five full months, and counting, and a robust local race schedule. In the Lower 48, races were held with strong regional fields in many areas, and cancelled in others. There were no national championships, no SuperTour, and no Junior Nationals. Some athletes completed an essentially normal race schedule. Some athletes did no races at all. Everyone probably did more interval-start races than they were accustomed to, and fewer sprint heats. Discretion was used widely in selecting athletes for international competition.

A memorable season of high-level racing came to a close with this bit of trivia: The weekend’s races appear to be among the latest FIS-sanctioned races held in this country within the modern era of the online FIS calendar (early 90s to present). They are tied with the final two races of the 2013 Spring Series (women’s 30 k and men’s 50 k), held in more traditionally spring-like conditions in Truckee, California, on April 10 and April 11, 2013. Temperatures there approached 60° F, and the snow was so slow that the winning time in the 30 k was nearly 1:42.

The earliest FIS race held on natural snow in this country, or anywhere in the Northern Hemisphere for that matter, appears to have occurred in Fairbanks, Alaska, on November 2, 1996.

Official racing in Alaska concludes next weekend with a hill climb up the alpine runs at Girdwood’s Alyeska Resort, which promises a Tour de Ski-esque gain of approximately 2,030 vertical feet or 619 meters (the final climb in Val di Fiemme appears to be “only” 418m). The athlete with the lowest combined times from this weekend’s two races, plus the hill climb, will be awarded the title of SkiMeister, wrapping up the inaugural Tour de SkiMeister three-race series.

How to Choose Snowmobile Tracks the Right Way