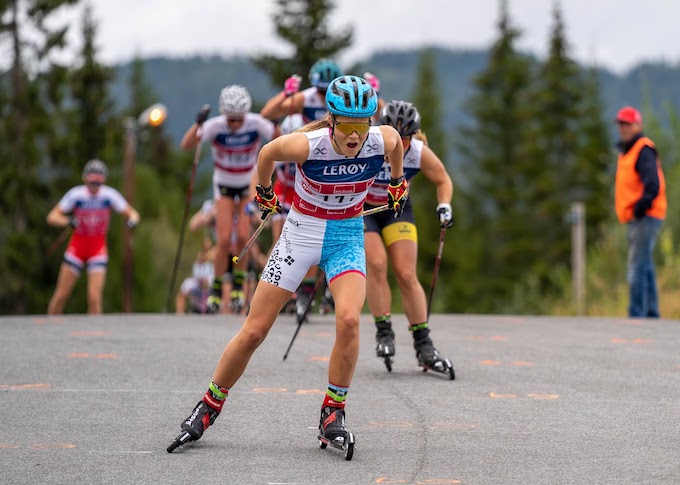 Madshus racers take home a handsome bouquet of podiums from Toppidrettsveka, including the overall victory for the weekend, looking promising for the upcoming Olympic season.

The annual summer roller ski festival in northwestern Norway featured four races in three days, and was once again open for international racers.

Toppidrettsveka 2021 opened with a marathon race on Thursday, August 19, where Madshus racers parked the competitors: Astrid Øyre Slind truly set the standard, winning the 55-kilometer double-pole race in Hitra by almost two and a half minutes. Madshus’ rising World Cup talent Hedda Østberg Amundsen claimed second place, and beat Olympic-legend-turned-long-distance-pro Marit Bjørgen by nearly a minute and a half.

Friday, August 20, featured two uphill mass start events midday: a double-pole race and a skate race, both on the same brutal 3-kilometer course from Årvågsfjorden to Brekka in Aure. In the women’s skate race, Madshus rising young team claimed both first and second place with Karoline Simpson-Larsen 15 seconds ahead of Elena Rise Johnsen. In the men’s skate race, Harald Østberg Amundsen finished second and nailed his second podium for the weekend.

Moving on to the sprints on Friday evening, Rise Johnsen was second in the qualifier and won every heat including the final, bagging her second podium for the day.

On Saturday, August 21, Rise Johnsen capped her race weekend with another podium, winning the thrilling sprint finish in the 15-kilometer skiathlon at Knyken. With first place in the skiathlon, the 21-year-old also secured the overall victory for the three-day roller ski festival.