The 2022 FIS Junior/U23 World Ski Championships trip has been made possible through support from the National Nordic Foundation (NNF), which has identified this invaluable opportunity for developing athletes as one of its “Pillar Projects”. You can support the NNF and the next generations of America’s top skiers by making a donation here.

LYGNA, NOR — The second event of the week for 2022 FIS Junior World Ski Championships, and perhaps the most highly anticipated, was the men’s and women’s relays. It was in the relay in 2017 when the US women broke onto the podium on home turf at Soldier Hollow, Utah, starting a cascade of strong American performances in the World Juniors relay. The next year, in Goms, Switzerland, it was the men who landed on the podium with an historic second-place finish, which they then one-upped the next two years to bring home gold from Lahti in 2019 and Oberwiesenthal in 2020. The US women also finished on the podium in 2020, in second place.

After a little lapse in 2021, when the US junior women were not even able to field a team due to Covid contact-tracing protocols, both the men’s and women’s teams were ready to fight today. 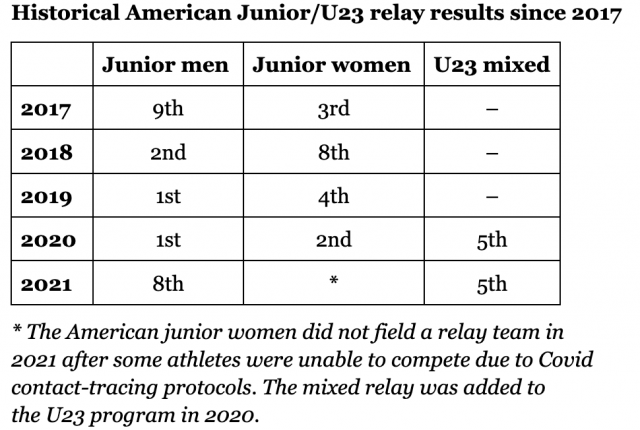 First up was the women’s 4 x 3.3 k, which featured separate courses for the classic and skate legs. As the women warmed up and made final preparations, the stadium filled with eager spectators in the form of young schoolchildren. As the announcer explained, one of the event sponsors had paid for the transportation of hundreds of local school kids to the venue each day. Thus as the start gun went off, it was to the chorus of many small voices shouting “heia, heia!” and many waving Norwegian flags.

Skiing the scramble leg for the US team was Kate Oldham (Aspen Valley Ski Club/Carbondale, Colorado). “It was really fast,” she shared afterwards, “everyone went out really hot, it was fun just trying to ski with the best.” Oldham finished her 3.3 k in a time of 10:03.5 and tagged off to her teammate, Samatha Smith in eighth position.

As Russia started to pull away at the front, Smith (Sun Valley Ski Education Foundation/Sun Valley, Idaho) worked to gain ground on the others, moving the team up to fifth place at the completion of her leg. From there, Nina Schamberger (Summit Nordic Ski Club/Leadville, Colorado) took over as the technique switched to skate. Schamberger closed on the Swiss team, who was sitting in fourth, just ahead.

As the skiers entered the final climb, dubbed “waffle hill,” a pack had formed with Russia still out front. “I definitely tried to pace it like a sprint and just really push myself and try to use the downhills to recover as best I could,” explained Schamberger, “but it was definitely very painful but short enough because you were able to push as hard as you could the whole time.”

For the final leg, Schamberger tagged Sydney Palmer-Leger (University of Utah/Park City, Utah), handing off in seventh place. Up front, Norwegian anchor Anna Heggen was closing the gap to the Russian, Elizaveta Bekisheva and the two entered the stadium together, leading to a sprint finish and lunge which ultimately went in favor of the host nation. The Germans were next in third, +35.4 behind. Palmer-Leger picked off two places on her leg to land the US women in fifth, +1:14.7.

“It was really windy out there and you just try to push every little part because there’s no rest until the end,” said Palmer-Leger.

For three of the four athletes on the US team, this was their first time competing in a relay. When asked if they practiced exchanges at all they said, “it was pretty much just winging it.” Palmer-Leger elaborated saying, “It was pretty smooth, it’s a really short course and just taking a few seconds in the tagging is not going to do much. You don’t want to crash or mess up the hand-off because then that’s 30 seconds so, yeah you kinda just look back and double-pole and then wait for them to tag you.”

With the women’s race complete, it was time for the men to line up, the race for them a 4 x 5 k with each leg skiing two 2.5 k loops. For the US, Michael Earnhart (APU Nordic Ski Center/Eagle River, Alaska) took the scramble leg. After the first 2.5 k it seemed that Swedish skier Måns Skoglund had broken away but the pack hunted him down as they exited the stadium for the second time, Earnhart tucked in behind Team Norway. Entering the stadium for the second of their two laps, Skoglund (SWE) had again gained a slight lead, with teams Russia and Japan in second and third. Behind them, Earnhart was leading the chase to close them down.

Into the first exchange, the gaps had closed and Brian Bushey (University of Utah/Waitsfield, Vermont) took over for Team USA.

Heading out into a ripping headwind, it was Sweden, Japan, Russia, and the US, being chased by Norway. As they descended into the stadium for the first time, there were still four teams up front, though Japan had dropped and Norway had joined. This time with the wind blowing in their favor, the skiers all chose to stay outside the tracks. “The first lap, coming through, I saw everyone hop out of the tracks so that’s when I decided to,” explained Bushey. “It was definitely faster.”

As Russia started to pull away slightly, Norway and the US were slightly detached at the start of the second lap of leg two. Canada was closing in on them and by the time they entered the exchange zone, they were a group of four, behind Russia, the US tagging in second position with Team Canada on their tails.

Switching to skate, Walker Hall (University of Utah/Winthrop, Wash.) took over for the US and over the course of his first lap closed the gap to Russia, bringing the lead pack up to five nations. Letting the Russian break the wind, the others slotted in behind as Sweden began to fade.

Canada too dropped off the pace, leaving Hall and Nikolai Elde Holmbœ of Norway skiing together. Up the steep “waffle hill,” Hall pulled away from the Norwegian, leaving the front three teams all separated by some seconds as they executed the final exchange.

Will Koch (University of Colorado/Peru, Vermont) took the anchor leg for the US. He was soon caught by Aleksander Elde Holmbœ of Norway, the two of them skiing together with Russia off the front. In a scene that brought to mind Rosie Brennan’s efforts in the Olympic 30 k, though admittedly lasting a much shorter duration, Koch tried to get the Norwegian to take on some of the lead work as they headed straight into a bracing wind.

“As soon as that Norwegian caught me, I almost tried to stop and let him by,” said Koch, “but he didn’t want to lead either so he kinda stopped with me, but we luckily didn’t get caught by anyone.”

At this point, they were well clear of Team Canada, who was in fourth position.

Passing through the stadium, with only the “waffle hill” remaining, Koch had the lead, though he was overtaken by Holmbœ (NOR). The Norwegian seemed to have pulled away, but Koch put in a surge. This move was answered by Norway, and when they came into view on the descent, Norway had maintained its lead. “It came down to just a final sprint over the last hill!” said Koch afterwards.

“I think we definitely wanted to get on the podium, that was a huge [goal], it would have been fun to win but we’re really stoked with bronze,” concluded Koch. Adding to that Hall said, “Yeah, I think just going out, and skiing the best we could.” Bushey echoed that sentiment saying, “Yeah, we all just had to ski our best.”

To the fans following along at home, the boys said “We love you guys, it would not be possible without all of you! Thanks for the support, thank you NNF, go USA!”

The program now switches to U23 competition for a day with a 10/15 k classic race on Thursday. The juniors will resume racing on Friday.

Growing up in Washington’s Methow Valley, Ella was immersed in skiing and the ski community from a young age. From early days bundled in the pulk, to learning to ski as soon as she could walk, to junior racing, a few seasons of collegiate racing, and then to coaching, she has experienced the ski world in many forms. Now, as a recent graduate from Dartmouth College, she finds herself living in France splitting her time between teaching English at a university in Lyon, avidly following ski racing (and now writing about it!) and adventuring in the outdoors as often as possible.

Opinion: Get your commentary off our bodies