You have probably seen a lot of yellow skis in the early World Cups and Ski Classics if you have been streaming races this year.  What are those skis?  They are the new family of Speedmax skis with some interesting and effective variations.

FISCHER’s NEW SPEEDMAX PROVED TO BE THE “GO TO” THIS SEASON.

The “go to” workhorse for the broadest range of conditions is still the highly vetted Speedmax with the proven 610 Mold.  This is what both the men’s and women’s overall champions at the 2022 Tour de Ski relied on for most of the events.   The Speedmax wins in any given track condition. The new yellow version has a lower and lighter tip for faster turn over and better climbing.  The ski is still available in either a Plus or Cold version with the Plus being the better choice for universal conditions.  The Speedmax still relies on Cold Base bonding with Air Core construction and High Modulus Carbon laminates to be fast and light. 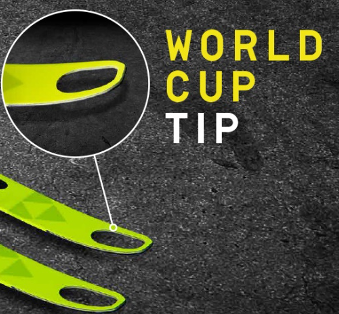 The  new Speedmax 61K was sent to a few dealers and elite racers earlier this year with the traditional graphics.  It was originally meant as a Soft track specific ski and it definitely is for the general racing public.  However, Fischer’s accomplished athletes started using the 61K on tracks that were not at all soft.  With well developed technique, elite racers were able to maintain stability on firm tracks with the 61K and garner glide that is grand and heroic.

What is the 61K?  Fischer uses two primary molds for their skating skis: the 115 and the 610.  Skis with the 115 have a long wheelbase with extended contact zones that dissipate the skier’s weight.  Skis with the 610 mold have a shorter wheelbase with relatively short contact zones.  The 61K takes the 610 mold and shortens the wheelbase even more which creates rather soft tips and tails.

Who will benefit?  It is true that some stability is sacrificed by this flex pattern.  However, that makes the glide of the 61K extremely fast.  Advanced skiers who can maintain high tempo V2’s even on less than ideal tracks will love the 61K.  Do you have to be Johannes Klaebo or Natalia Nepryaeva to handle these skis?  No, but you better have well developed technique if you want to use the 61K on a rather firm track.   As mentioned above, the 61K Speedmax was originally designed as a soft track ski.  The flex pattern makes this ski very controllable and extremely fast in soft track conditions regardless of skier ability.

Next up is the all new Helium.  The lightest racing ski on the market.  Unfortunately, the Helium will only be available in very limited numbers.  The goal with the Helium was to make an ultra light ski that did not sacrifice durability, speed or stability.  The first step in achieving that goal was to create an all new core for the ski.  Fischer came up with the Bidirectional  Air Core which is essentially taking Air Core material, run it perpendicular to the core, and have it make up most of the sidewall.  This is far lighter than traditional construction and provides for a beautiful flex pattern and outstanding durability.

The second step for the Helium was creating the Helium Shield.  Fischer engineers created a unique weave of High Modulus Carbon intertwined with Fiberglass for an extremely light sheet that keeps the Speedmax strong and provides great torsional rigidity for effective stability.

Fischer will have these new skis available to test and try out at the post Birkie demo at the start area on the Sunday after the Birkie.  They look forward to your input.

Germany outsprints Sweden and the ROC for gold and a second team medal; Brennan and Diggins fifth for USA