Logan Diekmann, Nina Seeman win on the streets of Bozeman, and BSF’s Rollerski races look to harness the momentum of summer training out West. Featuring Results and Video Highlights.

BOZEMAN – Jim Bridger was a mountain man. One of those figures born firmly entrenched in the old ways back East, before he split for the Mountain West for something new. A character to chart a theme pervasive through the American vision of the West – that ability to make something new and pursue it with everything you got.

It’s a tortured and uncomplicated metaphor (Bridger was one of the first white men into the intermountain West, but of course, wasn’t the first person to exist there). But if you were going to distill that character, and tap in purely to that “Pioneer, O Pioneer” spirit, you could do worse than the Bridger Ski Foundation (BSF) Pro Team Head Coach Andy Newell.

For most of the 21st century, Andy Newell was a metonym for the very top of American men’s skiing. Through four Olympics, 220 World Cup starts, and breakthroughs every step of the way, Newell was there, making the in-roads that a generation of men’s skiers is now picking up on. Newell retired from racing in 2018, and in just four years has quickly transitioned his ebullient energy into setting up a coaching consulting business, Nordic Team Solutions, expanded BSF’s Nordic programming to include a successful Pro Team, and made Bozeman’s mountains and plains a popular training ground for collegiate athletes during their summers.

Long home to an established nordic community with Montana State’s NCAA program and BSF, the efforts of Newell and the athletes he works with have been based in an effort to re-think and try out approaches to skiing development, training, and culture in Bozeman, and in the larger U.S. Ski Community. And in the latest example, that meant looking at a nearly 30-year-old BSF-held running race and saying, why not add a rollerskiing event?

The 29th annual Jim Bridger Trail Run last weekend then, also marked the 1st annual Jim Bridger Roller Ski Races. And the impetus, as for many things with Andy Newell, was to simply go all in on nordic in the pursuit of promoting the sport. “I’ve always loved racing the big European rollerski races like Blink and Toppidrettsveka. I thought this would be a fun opportunity to pair a legit rollerski event with a trail run and host them back-to-back. Having races like this is a great development tool for athletes” said Newell, in an email to FasterSkier. The races also acted as a fundraiser specifically for the BSF Pro Team, which has been one of the fastest growing and competitive programs in the U.S. since it was founded. Something that Newell talked about at length with FasterSkier earlier this summer.

Andrew Morehouse, BSF’s Nordic Program Director also added that the impulse to bring rollerski races inspired by those in Scandinavia to the United States is one that has been successful in the East and Midwest, but hasn’t found its way out West quite yet, “We’ve seen the success of roller ski races in the East and have talked within the Intermountain Division of how we can create a meaningful roller ski race series for our athletes in the West. I think this race, along with the Schutzenski Festival in Utah (to be held at Soldier Hollow during the US Ski Team’s Fall Camp there this October), is a great step towards that goal.”

In the pursuit to bring top-level rollerski racing to the hot, dry, and high Mountains out west, BSF’s efforts were a success.

A field full of BSF’s Pro and Comp (U14-U20) program athletes, along with racers from across the Intermountain West and a strong contingent of collegiate racers sure to show up on Eastern Carnival result sheets this winter made for an incredibly competitive and robust field.

They raced distances of either 6 k for the U16/U18 fields, or 12 k for U20/Open field on a 1.5 k loop that took them around the streets south of the Montana St. campus in Bozeman. The design was in line with the vision of promotion for the event, “high speed, multi-lap races right in [town] to make it spectator friendly and exciting,” said Newell. As with many roller ski events, racers also were provided matched skis, in this case from sponsors Swix and Solomon.

All races were skate, and with relatively flat terrain on course, that made for an event in which there was hardly a V1 to be seen. This was a day for V2, and a great opportunity for athletes to work theirs at max-effort next to other skiers and see where they can tweak their power application and tempo. Rollerski races, by design, are meant to be a stepping stone in training on the way to next winter, after all.

The early going in both the men’s and women’s open field were tight-packed affairs. Racers hemmed and hawed through tight-corners to bring the top-end of the field together, until slowly but surely, those lead packs became smaller and smaller.

In the women’s field, the last couple laps saw a group containing Dartmouth College (DAR) skier Nina Seeman, along with BSF Pro members Mariah Bredal and Sarah Goble gain an advantage. There was nothing between them until the race’s end, when Seeman and Bredal broke for a final sprint, and Seeman came away the winner (27:58). Bredal finished second (27:59), with Goble coming in shortly after (28:07) to complete the podium.

The men’s field saw a similar battle at the finish between three of BSF Pro’s leading lights. Into the final lap, Logan Diekmann, Finn O’Connell and Reid Goble were locked into a pack, with the promise of a true sprint all but assured for spectators. Goble found himself leading the pack for most of the lap, with O’Connell taking second wheel and Diekmann in third. Diekmann and O’Connell then launched their attack from behind their would-be lead-out, with Diekmann putting just enough gap over the line that the rare (and dangerous) rollerski lunge finish wasn’t needed. Diekmann in first (24:44), O’Connell in second (24:45), with Reid Goble rounding out the podium in third place (24:57). 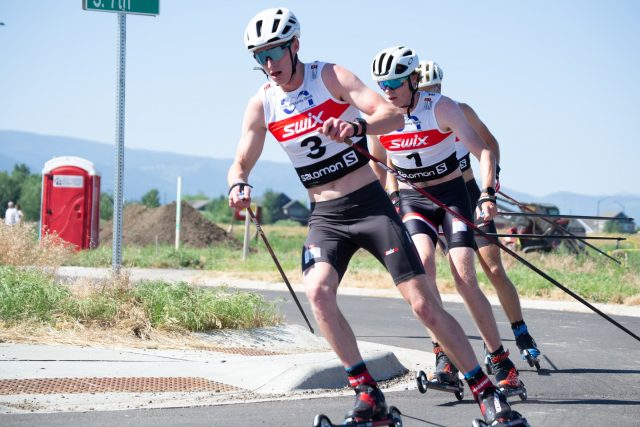 The inaugural BSF roller ski races were filled with fields of those who will find themselves at the top of NCAA, SuperTour, and even perhaps a World Cup this winter. That’s not bad for an inaugural running on the southside streets of Bozeman, and is yet another marker of the city, and Bridger Ski Foundation’s growth and development into a leader in the country’s ski community.

Using a Bluetooth Headset While Skiing – Reasons to Get One