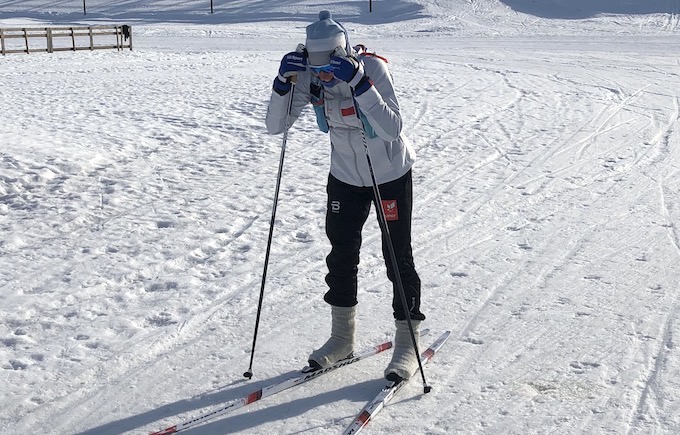 Thea Krokan Murud (NOR) skied 347 kilometers in 24 hours. The former World Cup skier, who switched to marathons prior to the 2019-20 season, admits it was a challenging project.

“347 kilometers is far, and 24 hours is a long time to be out skiing. I’m glad I did it, but it was harder than I had expected. I’ve skied a number of marathons this winter, but this 24-hour ski wasn’t really anything I had planned for or prepared for,” says the 25-year-old, explaining that the idea came about on a whim.

“I had done a 100-kilometer workout earlier in the week, and since the race season had been cut due to the corona virus, I thought it would be fun to try to ski for 24 hours. When my good friend and training buddy as of lately Julie Vollan Bø said she’d join me, it was a go. Three days later, we did it,” Murud says.

347 kilometers is 28 kilometers short of a world record for distance skied by a female in 24 hours, which is 375.5 kilometers posted in 2018, but Murud is in no hurry to try to beat that record.

“My goal was simply to ski for 24 hours. While I was at it, I decided it would be fun to see if I could log 300 kilometers. When I had reached that goal, I felt that everything else was a bonus. At that point, there were still a few hours to go until I had 24 hours. I felt confident I would make it, but my pace slowed significantly,” she explains. 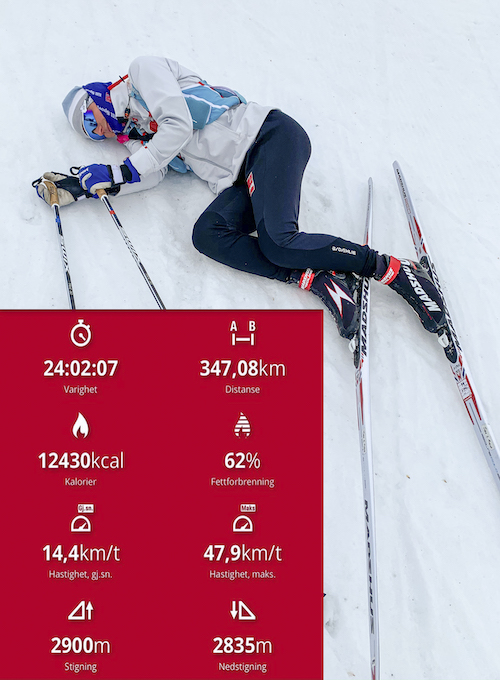 Murud completed her 24-hour ski doing laps on the 15-kilometer Ingalåmi race course in Lillehammer (NOR). The route was carefully selected based on a few critical requirements: It was somewhat sheltered and offered varied terrain without too much altitude.

“You definitely don’t want a lot of climbing when you’re skiing for that long, but I don’t think I could handle skiing 24 hours on a totally flat lake either, so I felt like we nailed the course pretty well, Murud says.

What do you eat to last through such a long event?
“Simply put: A lot. You need a lot of energy, so you have to pack a lot of food, and food that you enjoy eating and that is easily digested and quickly absorbed. I packed homemade sweet rolls, simple rice, lots of energy bars and gels, a variety of sports drink, energy drinks and coke, as well as some jelly candy men. I tried to eat and drink every hour, and switched between real food such as rolls or rice one time, and bars, chocolate and candy the next. Usually on long workouts and races, I get hungry toward the end. This was different, and eating was a lot of work. During the last four or five hours, I really only enjoyed the jelly men, and luckily, I had stuffed my pockets full of them. I think they were a hugely contributing factor to making it through the 24 hours.”

What was the biggest challenge?
“For me, it was skiing through the night. After the sun went down, the temperature dropped to minus 16 degrees Celsius. I had to put on a lot of clothes to stay warm, and somehow it was tolerable. Julie had a harder time with the cold, and about 3 am, she was miserable and no longer able to eat or drink, and she just had to quit. When she left, it got really lonely, and I’m also scared of the dark. I don’t know exactly what I’m scared of, but I have never liked the dark.” 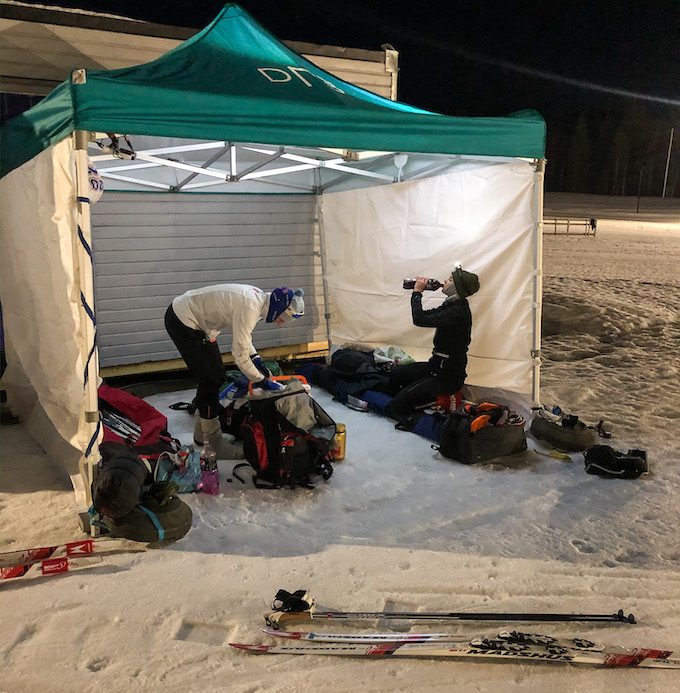 For Thea Krokan Murud, skiing through the night was the hardest part of the 24-hour ski, especially after her friend called it quits. Photo: Submitted

What kept you going at that point?
“I knew that if I quit, I would never make another attempt at a 24-hour ski.”

What was the highlight of the stunt?
“When Julie quit, she said she would come back after getting warm again, and I figured she might join me for the tail end of the project. But about 6:30 in the morning, she was back. Then the sun came up, and skiing into the sunrise after hours alone in the dark was just unreal. I am really glad I did it, but I’m totally amazed at Julie. She skied 250 kilometers with barely any long ski workouts this winter prior to the last couple of weeks when she has skied a few with me.”