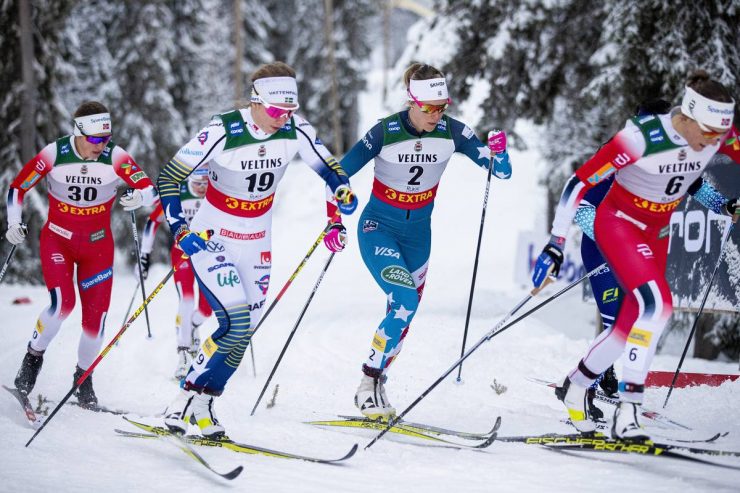 A big day for Sadie Maubet Bjornsen of the U.S. Ski Team (USST) in Ruka, Finland. She placed third overall in the women’s 1.4-kilometer classic sprint.

Italy’s Lucia Scardoni established the time to beat in the qualifier, 3:03.01. Maubet Bjornsen played her fitness cards early as she qualified in second, 1:15 seconds back.

“It has been an interesting fall battling through some frustrating tendinitis in my feet that didn’t allow me to run or ski a whole lot for three months, so I wasn’t quite sure what to expect coming into this season,” Maubet Bjornsen emailed to several outlets. “I knew I had strengthened my brain, but it is hard to know what to expect when you are doing less than ideal training to try to survive. I also have a  new wax technician, so I was excited to see what we could put together in our short ten days of working together. But all the stars aligned, and I had an incredible day!” 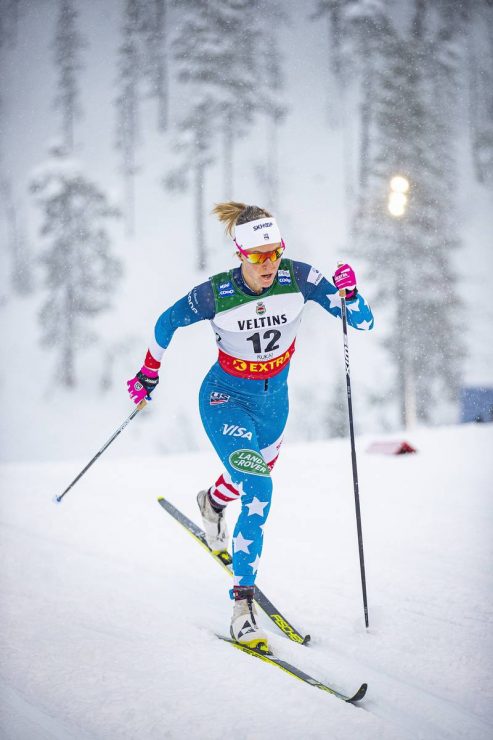 Sadie Maubet Bjornsen on her way to qualifying in second place during the 2019 Ruka, Finland classic sprint. (Photo: Nordic Focus)

Bjornsen’s route to the finals included a second place in her semi. The final was dominated by the eventual winner Maiken Caspersen Falla from Norway. Up and over the final striding hill, she was gone and untouchable for the win in 3:07.09. Sweden’s Jonna Sundling placed second (+2.33). 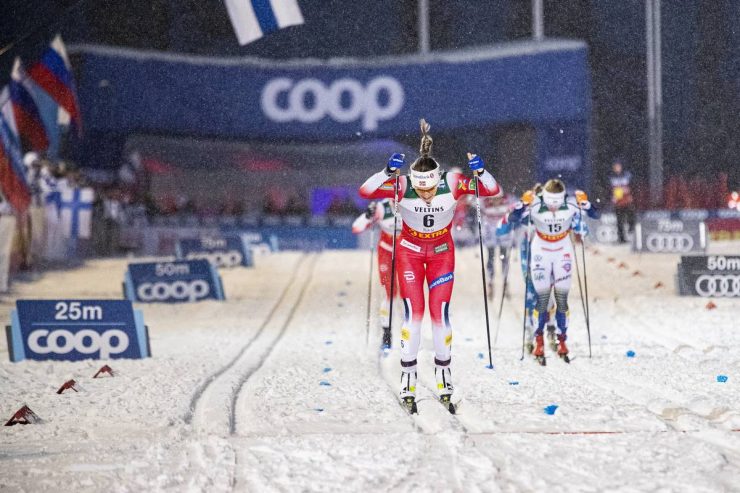 For her part, Maubet Bjornsen’s double poling kept her in it down the stretch — she out sprinted Norway’s Ane Appelkvist in a photo finish for third place. This was not an uncharacteristic early season result for Maubet Bjornsen, she placed second here in 2017’s classic sprint. 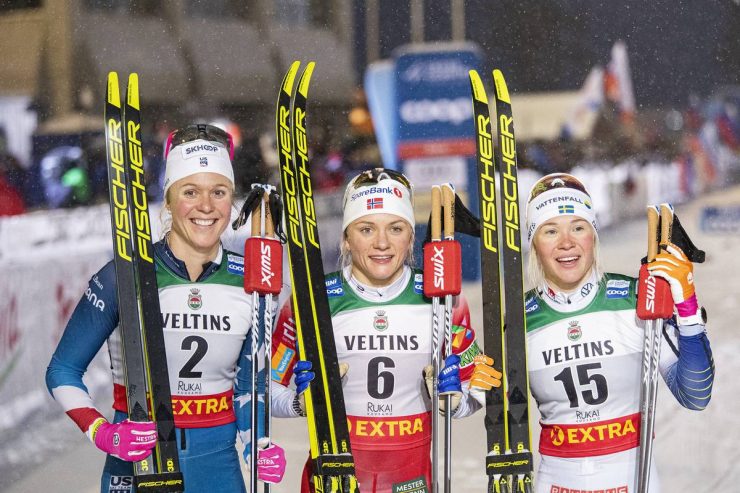 “The quarterfinals and semifinals went through perfectly. I managed to slip into the right places, and run up that hill with my own lane,” Maubet Bjornsen wrote. “When the finals arrived, I found myself in trouble at the halfway point. Some tangling at the corner left me kind of stuck. I’m not sure if my ski or my pole was stuck under someone… but I tried to just be patient and let them get off without breaking any equipment. When I finally got to go, I was ready to fight with every bit! Rounding the final corner, I was still in fourth place, but confident I could find one more gear change right at the end… and that is what I did. As I lunged, I knew I had given it all. Which amounted to a third place, which was super exciting. In a perfect world, I would have loved to fight for the win without the tangle, but the season is very young, and there a tons more races to come!

“Enormous shout out to our team, and my new wax tech, Per Erik Bjornstad, for some amazing skis!! I couldn’t have run up that hill the way I did today without those! And also impressive to see my teammates fighting today as well! There is a fun season ahead!”

Caldwell moved on to the first semi-final where she was in the mix until the final climb. She eventually faded to place sixth.

“I was happy with today,” Caldwell emailed to FasterSkier. “I’ve only made the semis one other time in Kuusamo (I think), so any day I can do that here is a good day. I felt great in my qualifier and went very hard in my 1/4 and was definitely still. Feeling it in my semi. It’s a short, but very tough course, so you can go backwards pretty quickly once you get tired. So overall a pretty good day and I was happy with my skis!” 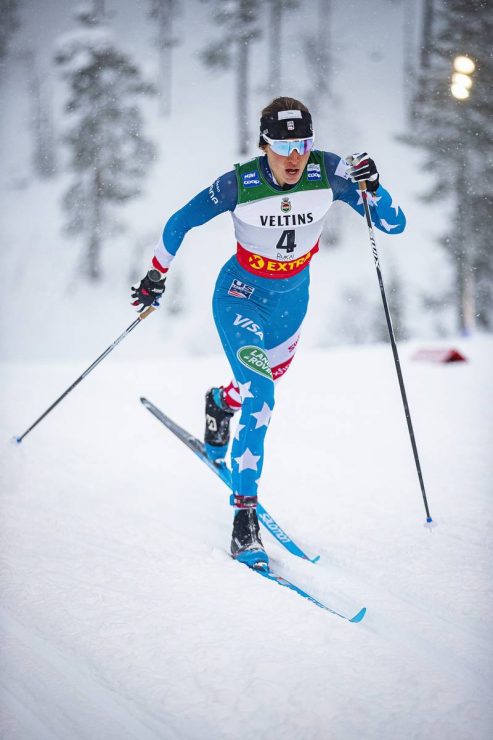 Sophie Caldwell during the 2019 Ruka, Finland classic sprint qualifier. She qualified fourth and placed 11th on the day. (Photo: NordicFocus)

Diggins and Brennan both contested the fourth quarterfinal where they were knocked out. Diggins placed fourth (+1.13) and Brennan fifth (+2.94). Sweden’s Sundling won that fast heat in 3:05.68.

“As for the sprint today: Due to some illness and challenging weather conditions in AK, I was unable to get any sprint time trials or simulations in this year so I really had close to no expectations for today’s race,” Brennan wrote in an email to several outlets. “Being a little more on the slow twitch side of things, I am very satisfied with the race today. I was particularly happy with how I was skiing and felt my fitness was good. My speed was not quite there, but I believe that will come in time. We are also adapting to new regulations from the FIS on course access and given all the changes, I was really happy with the process and skis that our staff put together today. I’m looking forward to getting a few more races under my belt this weekend.” 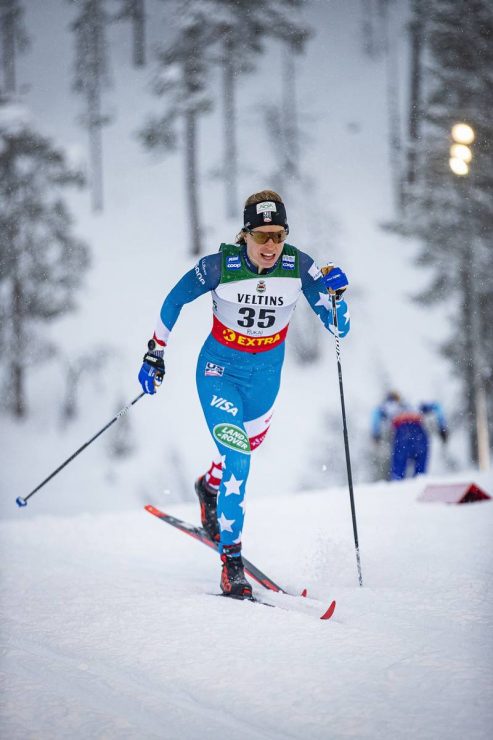 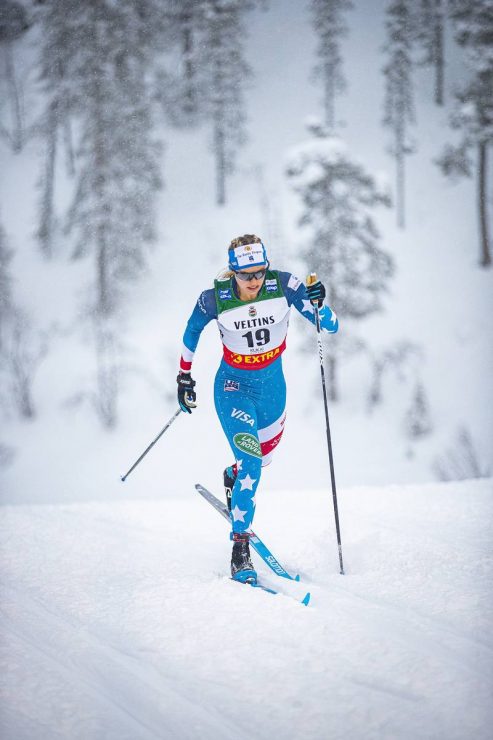 Post-race interview with the U.S. Ski Team’s World Cup Coach Matt Whitcomb and his comments on Jessie Diggins and the hunt for the World Cup overall.