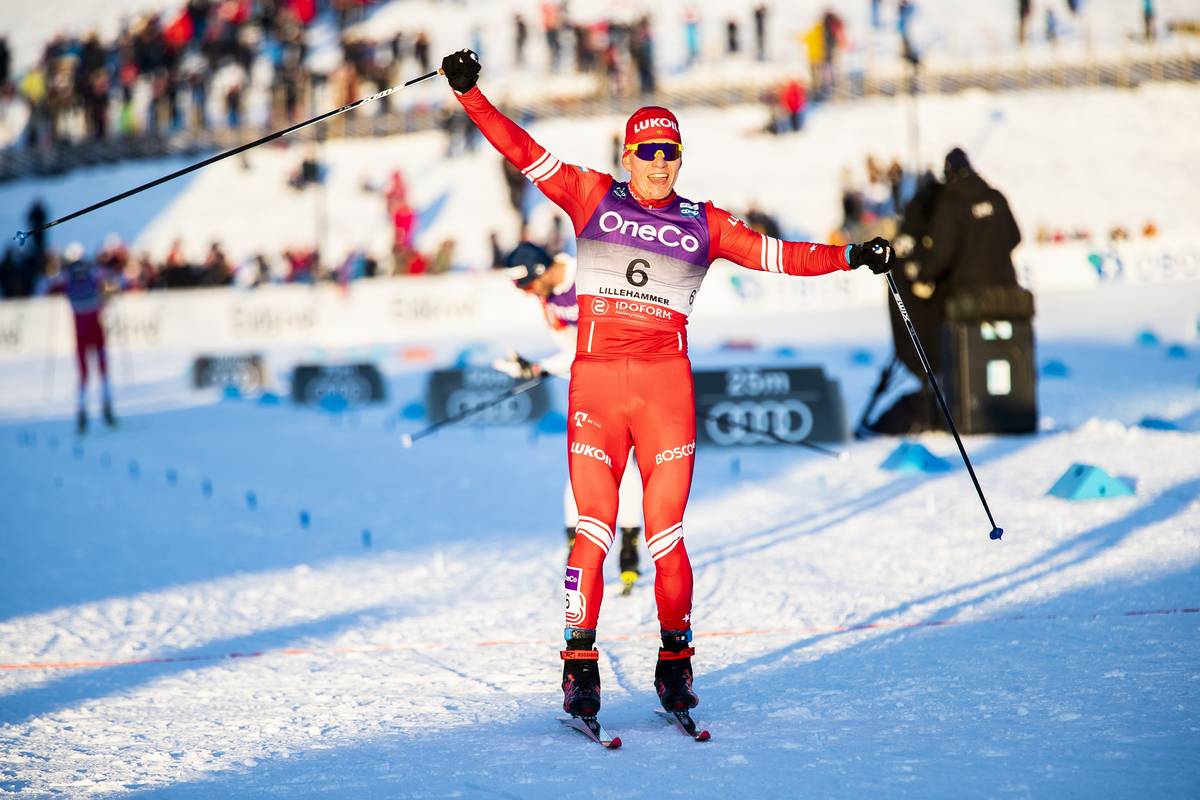 Norwegian countryside just as you imagine: farms, pine trees, a deep snow-blanket, and fast skiing. All this was on display under a bluebird sky in Lillehammer, Norway for the men’s World Cup 30-kilometer skiathlon. Amidst this legacy-backdrop, the beauty of a dual technique race with enough grinding Ks to string out and decimate an impressive field played out.

Fifteen kilometers in, at the ski exchange from classic to skate, nine skiers were separated by 6.5 seconds — Jens Bruman of Sweden to Russia’s Sergey Ustiugov. Sandwiched in there were all the names you’d expect: Norway’s Johannes Høsflot Klæbo, Emil Iversen, and Hans Christer Holund, along with Alexander Bolshunov of Russia, and Iivo Niskanen of Finland. Dangling 20 plus seconds from that group was Sjur Røthe and Martin Johnsrud Sundby, also from Norway. 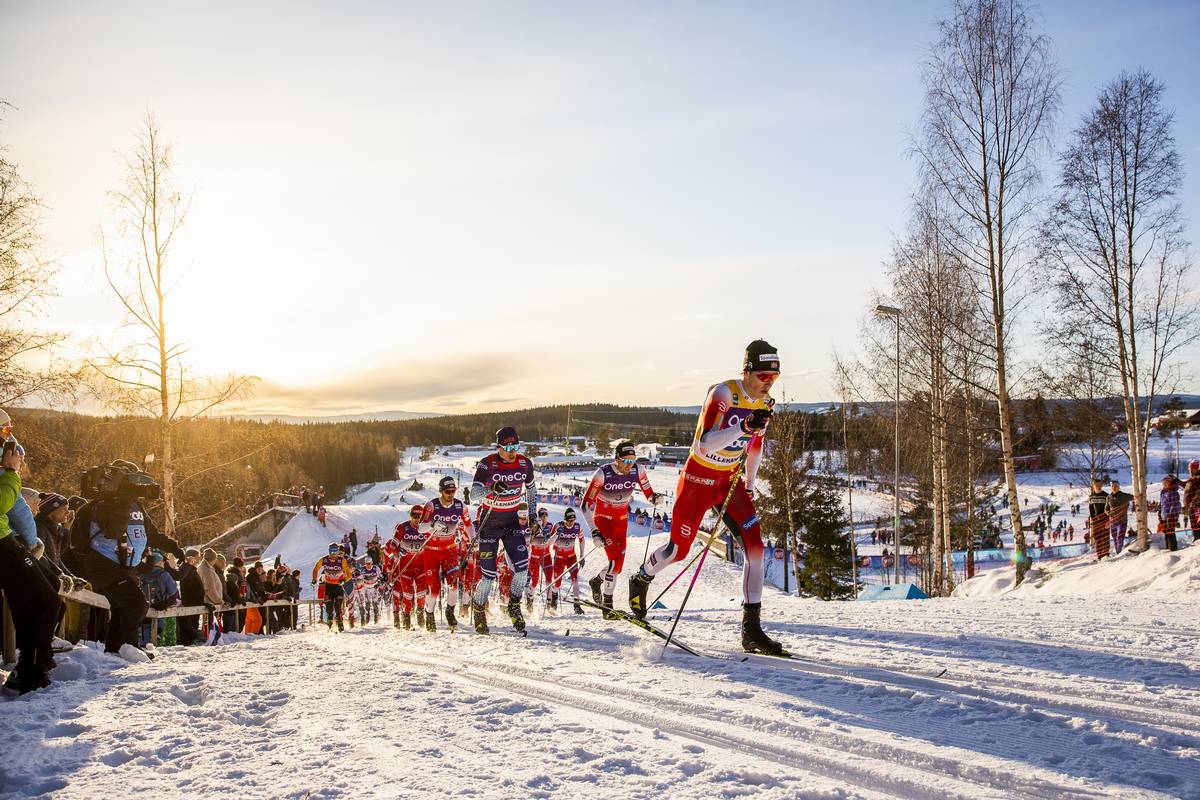 Johannes Høsflot Klæbo of Norway leading the classic train during the early moments of the 30 k skiathlon in Lillehammer Norway. (Photo: NordicFocus)

The 30 k skiathlon is an exercise in power application, raw fitness, and technique efficiency bundled into a roughly one hour and twenty-minute sport spectacle. 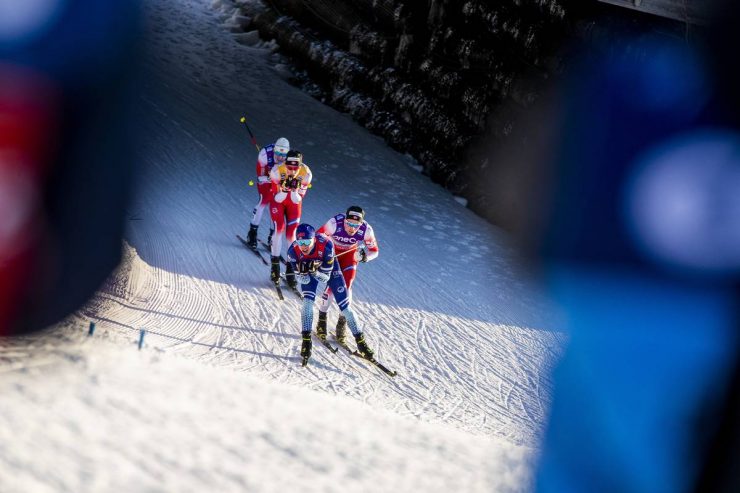 Iivo Niskanen (FIN), Emil Iversen (NOR), Johannes Hoesflot Klaebo (NOR), during the skate leg of the 2019 30 k skiathlon in Lillehammer, Norway. (Photo: NordicFocus) 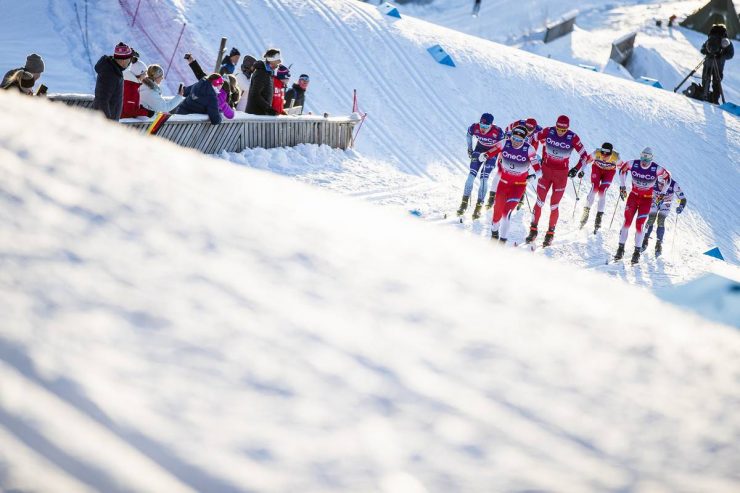 By 17.4 k, atop the course’s major climb, Holund pulled Iversen and Bolshunov along for a clean break from any would-be podium spoilers. Fast forward to the closing moments of the race and the last trip up the big ascent in Lillehammer and Holund remained the workhorse. He chugged along, setting the pace up front. Iversen fell off slightly on that climb, dangling five seconds back. 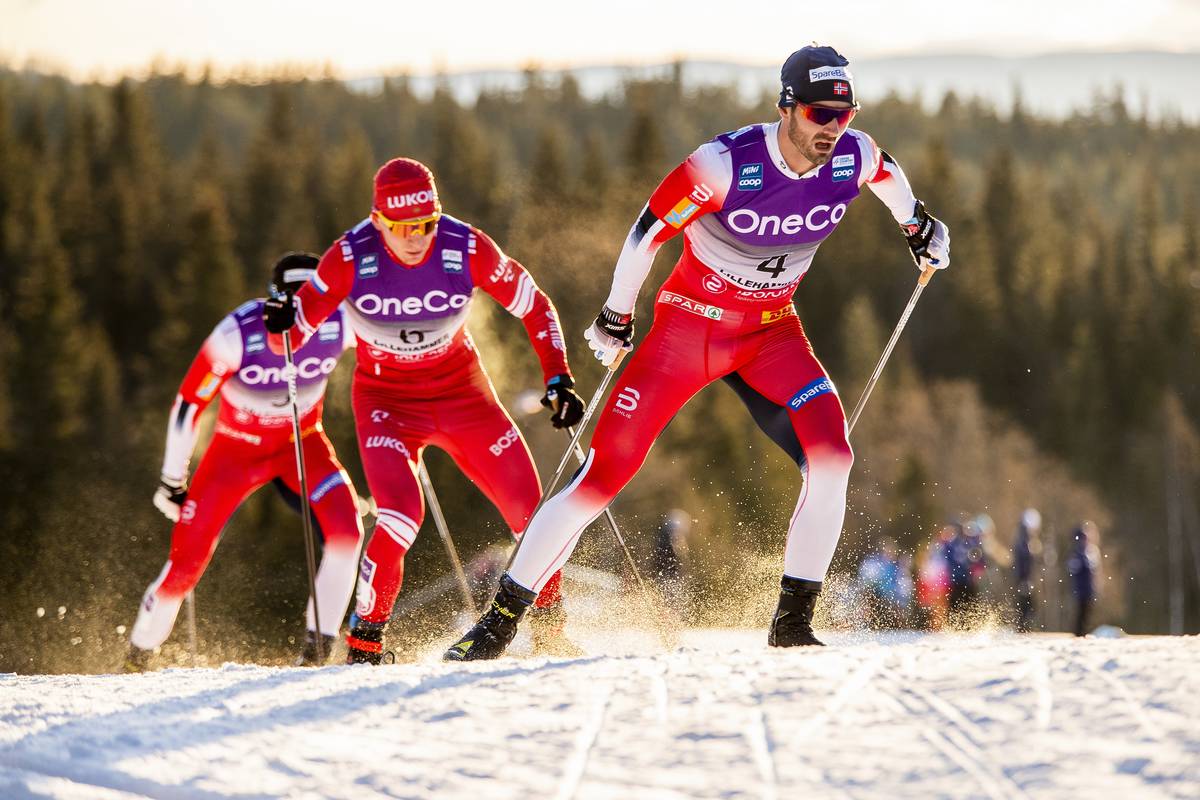 Hans Christer Holund (NOR) leading Alexander Bolshunov (RUS) and Emil Iversen (NOR) during the skate leg of the 2019 30 k skiathlon in Lillehammer, Norway. (Photo: NordicFocus)

On the final punchy hill before the descent and sweeping turns into the stadium, Bolshunov attacked with an unmatchable V1. He crossed the line for the win in 1:17:42.4 hours with Holund in second, 2.2 seconds back. Iversen placed third (+7.9).

“I am still not in the best shape that I could be,” Bolshunov told FIS after the race. “It was the same as in Seefeld where I followed Hans Christer Holund but could not manage to take him. I am happy that I managed that today.”

Klæbo skied to fourth (+57.4) with Sundby in fifth (+57.7). It was Sundby’s first time not on a World Cup skiathlon podium over a seven race span. Klæbo won this event in Lillehammer with panache back in 2017 as he gapped Sundby near the finish marking a changing of the guard on the men’s Norwegian National Team.

Saturday, Norway captured second through sixth place, including 12 skiers in the top-20. As a home race for Norway and additional starts allocated for the host nation, the Lillehammer field was exceptionally deep with talent.

For the U.S., David Norris (APU) just missed the points finishing in 34th (+4:39.7). According to FIS, this was Norris’ second World Cup skiathlon. He also raced the skiathlon at the 2018 World Championships where he placed 38th. Outside of Erik Bjornsen, who finished just behind Norris in 39th today (+5:12.7) and scored in the points twice last weekend, Norris has been the top distance skier for the U.S. this season.

“I think it was a good step forward from Ruka,” Norris said after the race. “I felt like I had better energy and the points of the race where I was struggling. I just did a better job of pushing through those minutes and maintaining my form, technique, and tempo.” 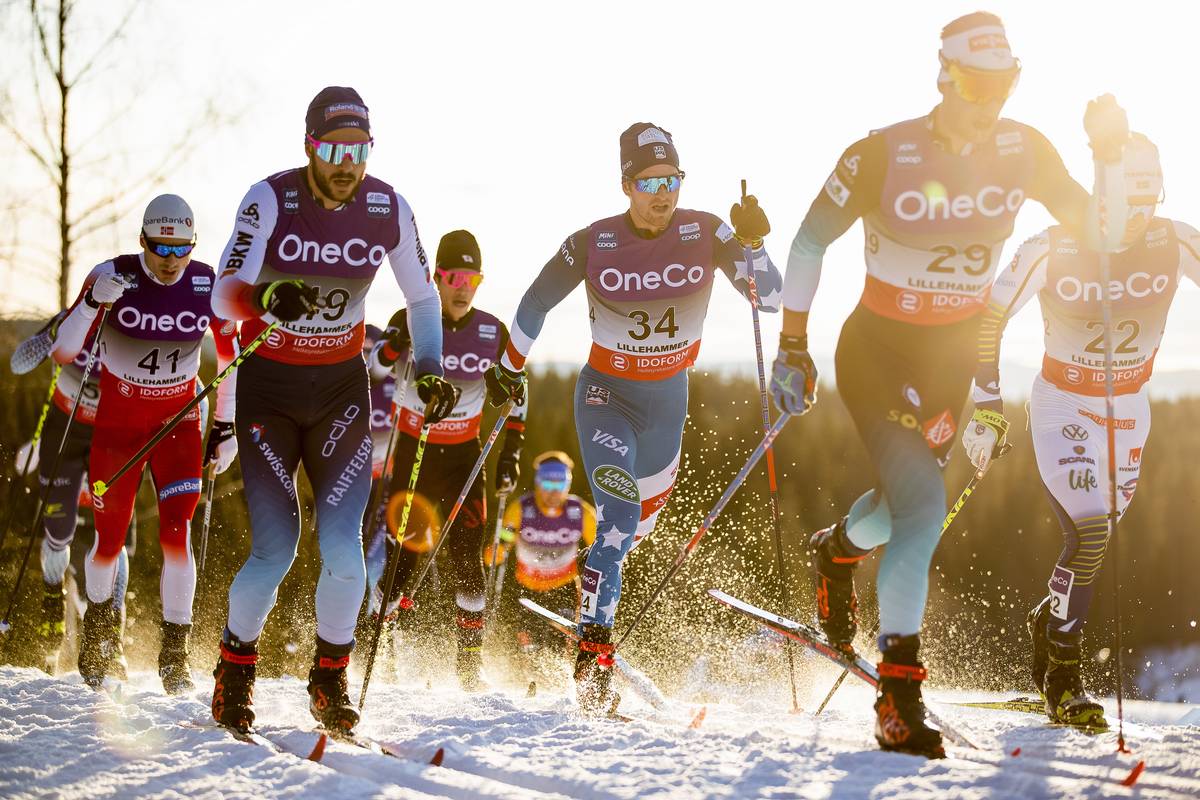 Coming into the ski exchange, Norris and Bjornsen skied in with a cluster ranked 28th through 36th — with Bjornsen in 28th, Norris in 32nd.

Bjornsen was disappointed with his day. He said post-race that he began to lose kick on the second of the classic ski laps and could not find his best sensations throughout the race. In 2017, Bjornsen placed 20th  in Lillehammer’s World Cup 30 k skiathlon. 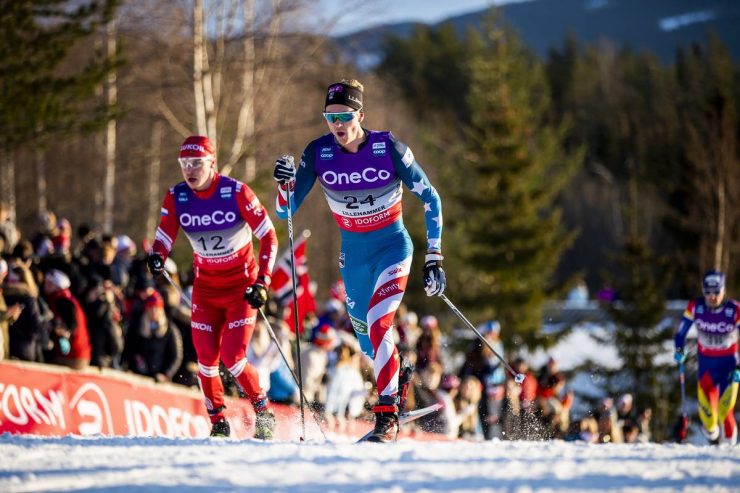 Erik Bjornsen during the classic leg of the 2019 30 k skiathlon in Lillehammer, Norway. (Photo: NordicFocus) 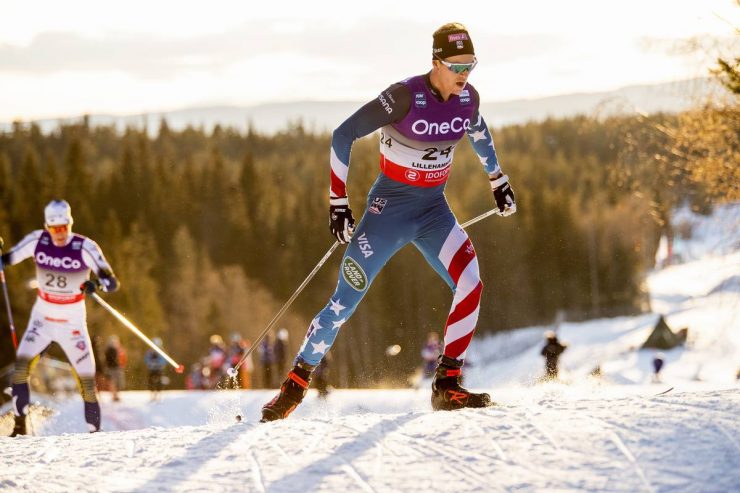 Erik Bjornsen during the skate leg of the 2019 30 k skiathlon in Lillehammer, Norway. (Photo: NordicFocus)

Andrew Musgrave of Great Britain pulled himself into the top-20 during the skate leg to finish 18th overall (+3:02.9). (You can hear an extended interview with Musgrave posted below. 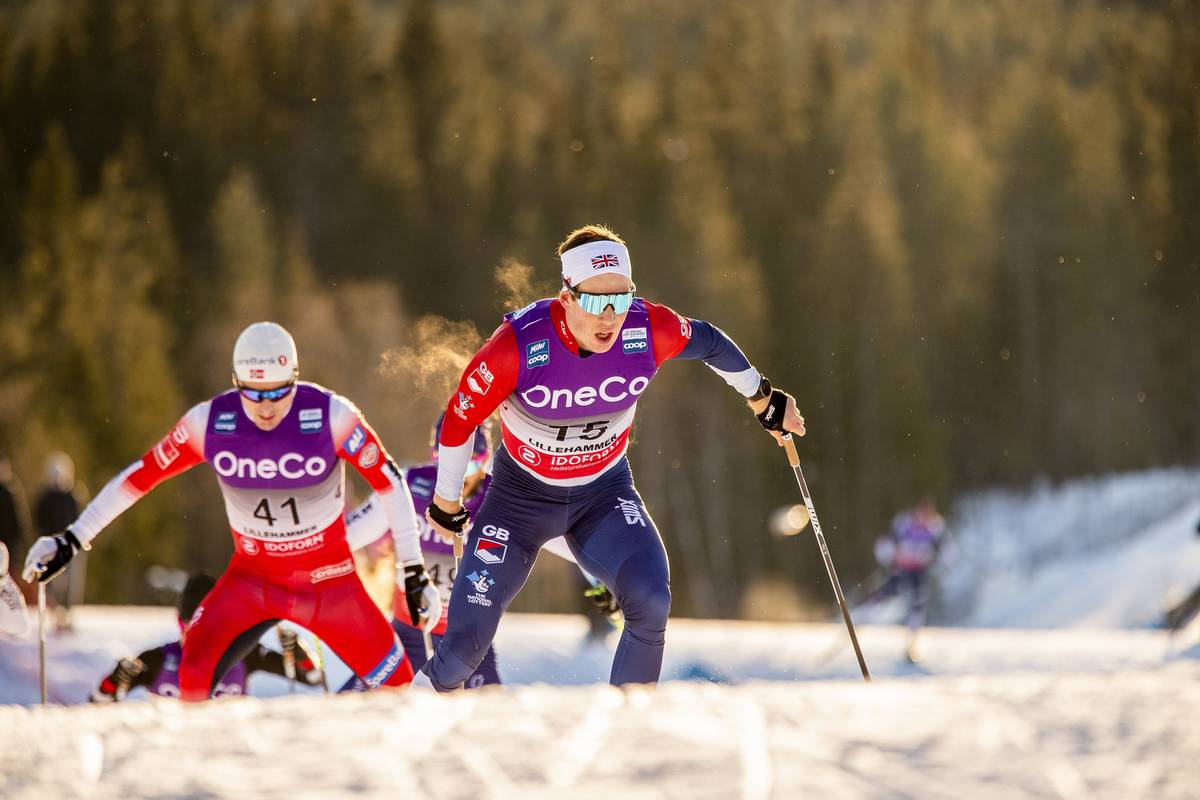 Racing continues tomorrow with the 4 x 5 k, and 4 x 7.5 k relays for the women and men respectively. 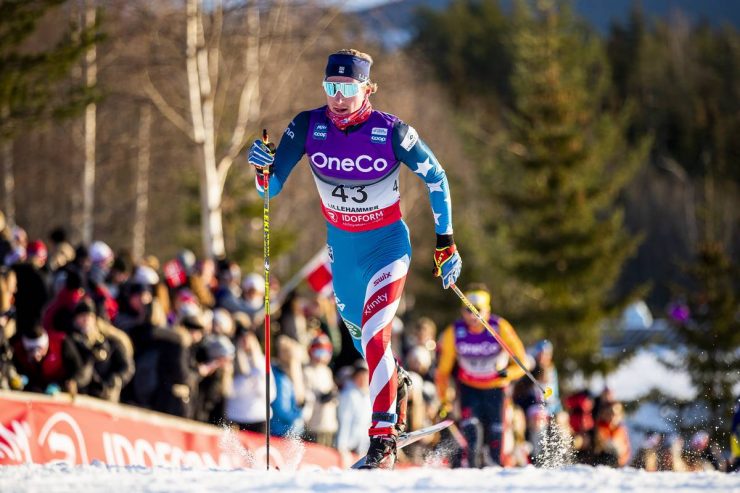 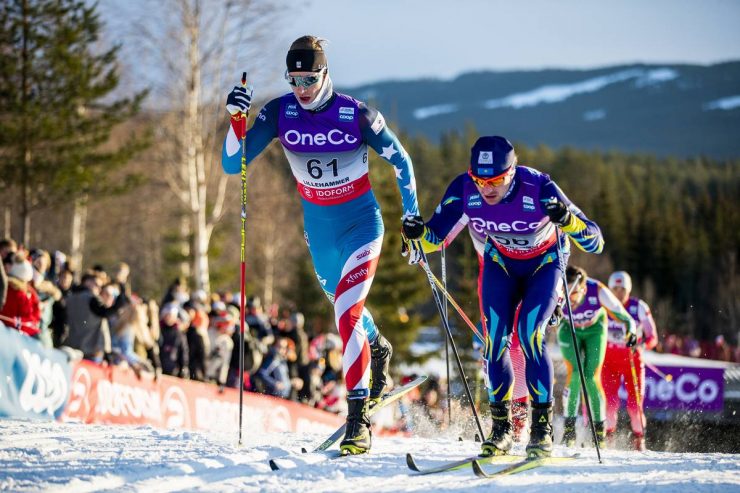 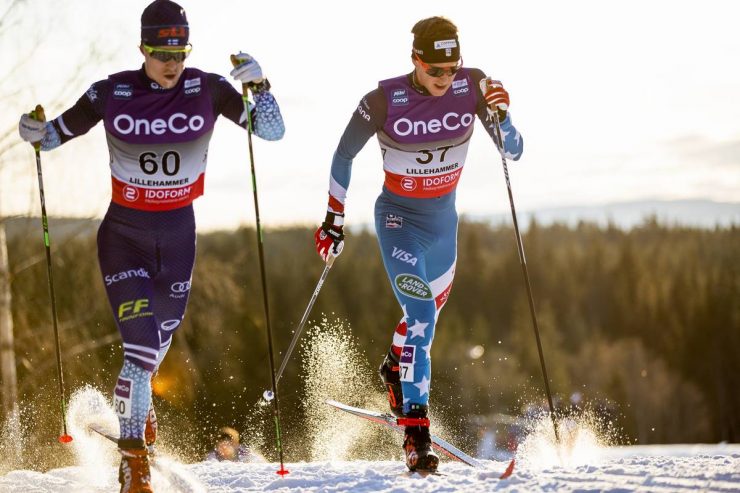