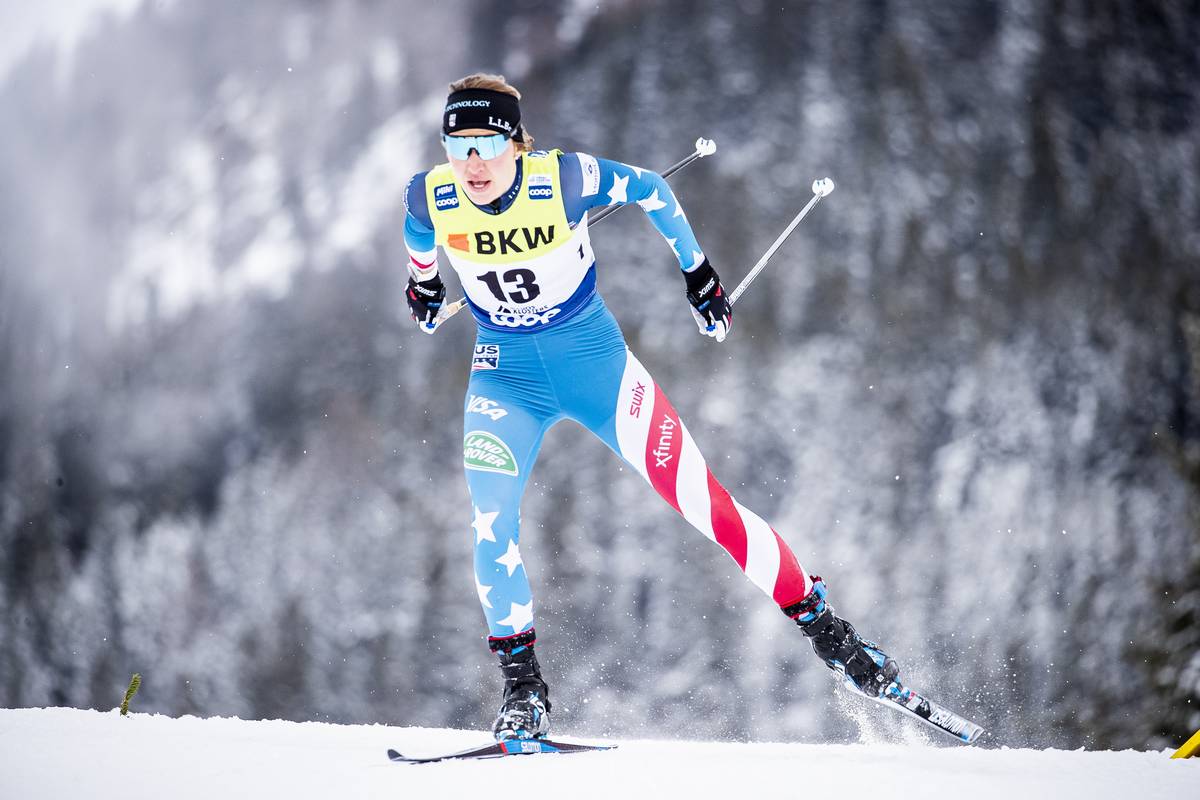 Picture perfect. Sophie Caldwell on her way to qualifying first in the 2019 Davos, Switzerland skate sprint. She was third overall for the day. (Photo: NordicFocus)

(An earlier version of the story mistakenly stated Caldwell had placed second. FIS live timing had Caldwell in second place. Apologies for the error.)

When Davos is good, it is good on a global scale. With the Swiss valley blanketed in snow, and a gauze of high clouds keeping the race proceedings just a notch away from perfectly sun-shiny, the World Cup’s 1.5-kilometer freestyle sprint was won by twenty-year-old Swede Linn Svahn. According to the International Ski Federation, this was Svahn’s second career World Cup start. She placed 21st in last season’s skate sprint in Falun. At World Juniors, she was fourth in the 2019 classic sprint in Lahti, Finland. Add Svahn to the growing stable of Swedish A-list skiers on the early side of their twenties. 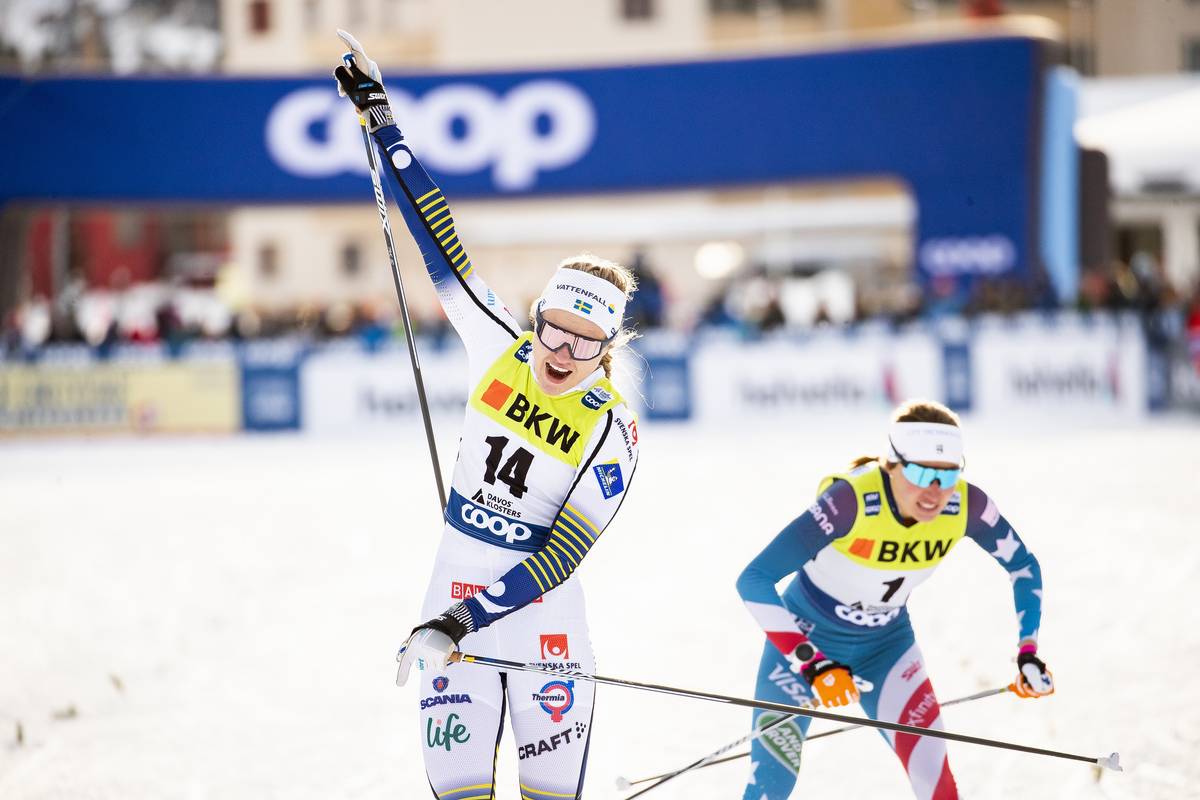 As the remaining meters became scarce in the women’s final, Svahn and her lickety-split skis took a ten-meter gap up and over the last climb. Barely separated  from the chasers into the final straight, she took a clean win in 2:38.54.

Even Svahn seemed surprised by the result. In near-perfect English, as the camera zeroed in for a podium shot, she blurted the not uncommon expression of “What the &uc!” to describe her astonishment. Her hot-mic moment was spot on.

For North America, it was a very good day. The results were clear: every North American entered qualified for the heats. For the U.S. Ski Team (USST), Sophie Caldwell qualified first at 2:45.15. Her speed was indicative as she had a 1.47 second gap on the second-fastest qualifier, Stina Nilsson of Sweden.

With her first World Cup start of the season, Canada’s Dahria Beatty qualified in 30th (+10.48). One-fifth of the sprint qualifiers hailed from the left side of the Atlantic.

As Caldwell progressed through the sprint bracket, she tapped into her big and smooth technique. She won her quarterfinal and the first semi-final. In that semi, stacked with Stina Nilsson and Maiken Caspersen Falla of Norway, Caldwell played coy. She let others take flight off the front during the first of this two-lap course. Moa Lundgren of Sweden took the pacesetting chore as she made a separation on the first lap, but she was eventually pulled in.

On the second time up the course’s punchy hill, Caldwell moved up the left side and took it wide on the final right hand corner. Into the finish, she shot to the front for the semi-final win. 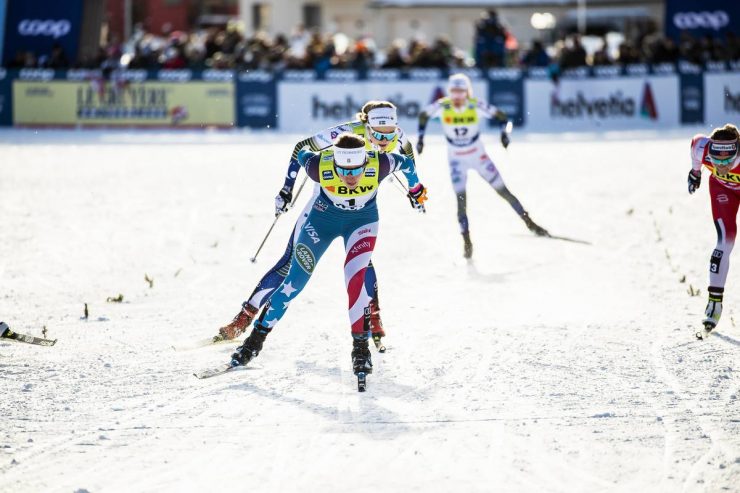 In her element. Sophie Caldwell in the 2019 Davos, Switzerland skate sprint. (Photo: NordicFocus) 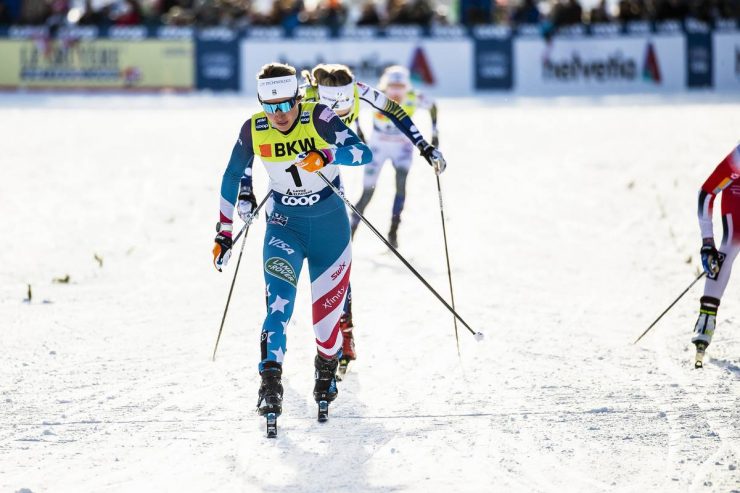 Caldwell won the qualifier, her quarterfinal, and her semi on her way to placing third overall in the skate sprint in Davos. (Photo: NordicFocus)

In the final, Falla took the helm and led five skiers in a line up the first hill. Caldwell sat in third.  Not until roughly 2:10 minutes into the final did any real move occur, and that was Svahn’s. Caldwell and Falla eventually came drag racing down the line for a photo finish. Both were unofficially 0.55 seconds behind Svahn. But Falla out-toed Caldwell to take second.

Kern was 15th overall on the day, Maubet Bjornsen finished her day in 16th, and Diggins in 17th.

Kern has rebounded from elbow surgery this summer and some minor bumps in her training. Davos proved to be a course and scene where she was able to click. According to Kern, today’s result was a “big step forward, which was exciting.” 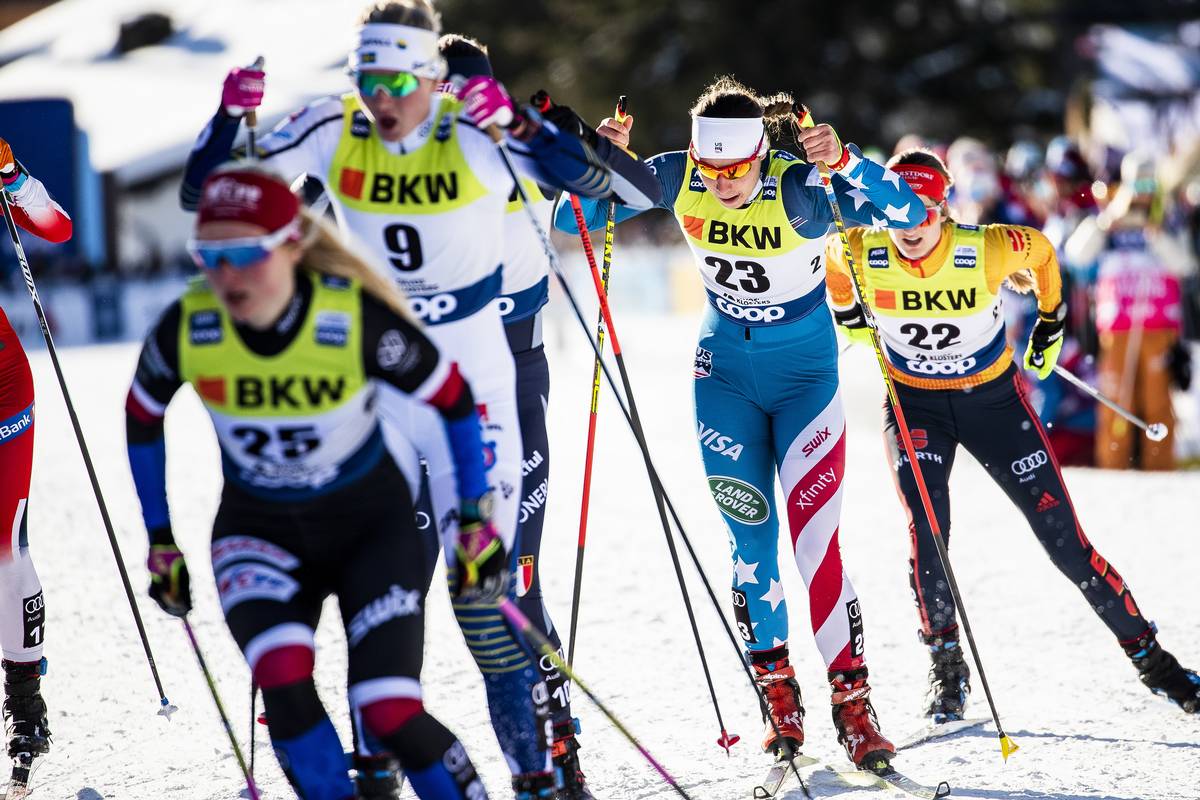 Swirbul placed 30th for her first career World Cup points. In her post-race interview, Swirbul noted that she is trying to embrace “skiing like me.” In other words, she is finding her own “best” technique that she describes as skiing “like a noodle”. Finding out she had a sprint start only a few day’s ago, Swirbul made the best of the opportunity. 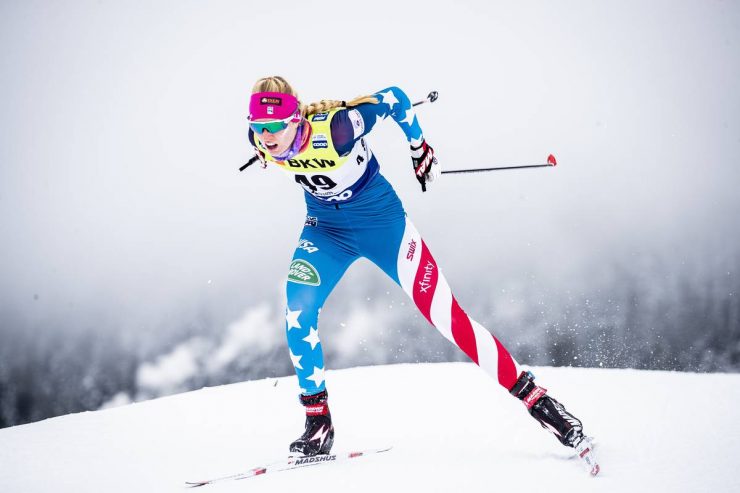 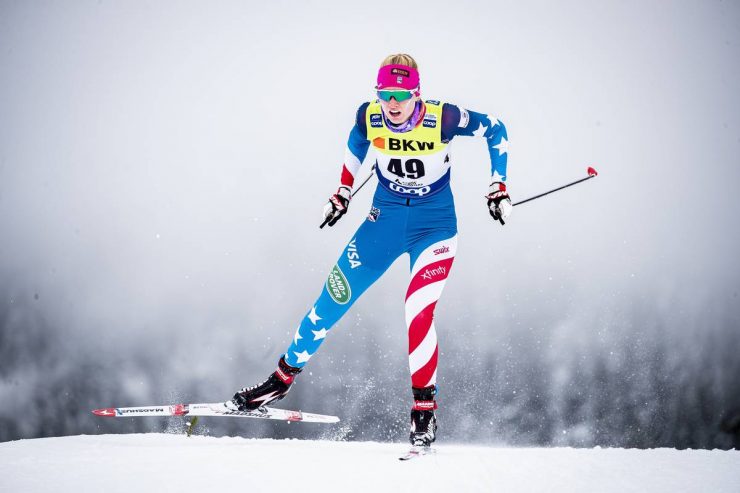 Canada’s Beatty placed 25th overall. Last weekend she posted solid results on the OPA Cup where she was third in a skate sprint.

“I was happy with my day today,” Beatty emailed. “It’s always encouraging to make the heats in my first World Cup of the season. It is a good starting point and I look forward to trying to improve on today’s performance as the season progresses. I had some strong racing last week at the OPA in Slovenia and my race shape is feeling good right now so I am really looking forward to tomorrow’s 10km skate here in Davos.”

Racing continues tomorrow with a 10 k interval start skate for the women. 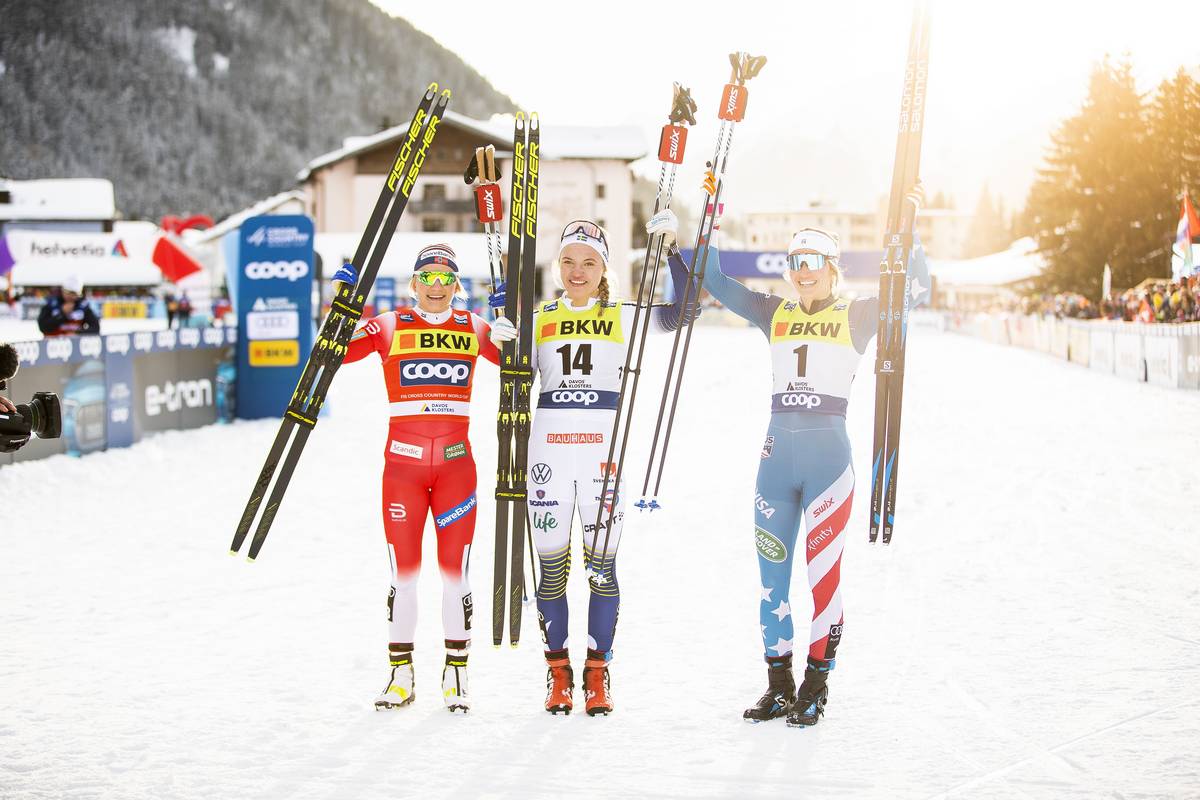