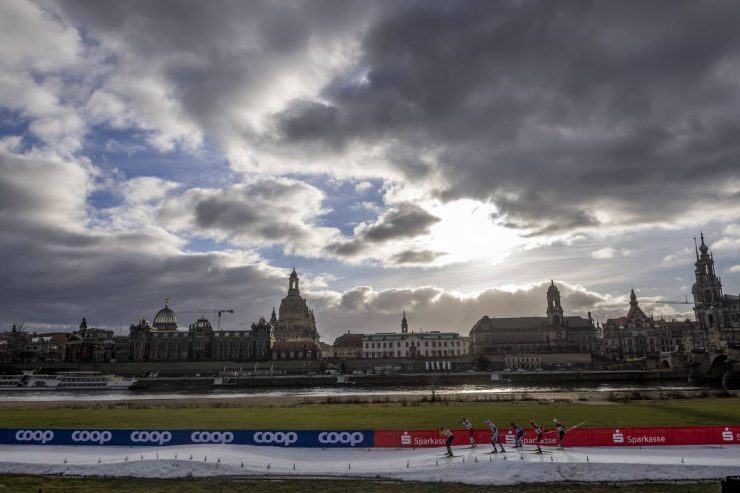 The metaphors are rife when describing the rough and tumble nature of the urban environment. Most often we think of pine forest, alps, and Hansel and Gretel valleys as the backdrop for the World Cup. To foster interest and in-fill a dense schedule of racing, city-sprints are nothing new when it comes to populating the World Cup calendar. Places like Dresden provide a contextual backdrop to a Europe steeped in history. The city is often a reminder of darker times, as it’s historic architecture was destroyed in World War II.

The city, since rebuilt to historical specs, is the place to be post Tour de Ski.

As a sprint specific weekend immediately following the Tour, the field is absent one notable name from Norway: Johannes Høsflot Klæbo. He placed third overall in the Tour and took the weekend to recover.

The World Cup show goes on. And perhaps one of the most stable and finest skate ski technicians out there took center stage. France’s Lucas Chanavat earned his third podium of the season and his second career World Cup victory with a win on Saturday in Dresden. Chanavat won the two-lap 1.3-kilometer qualifier in 2:14.72. 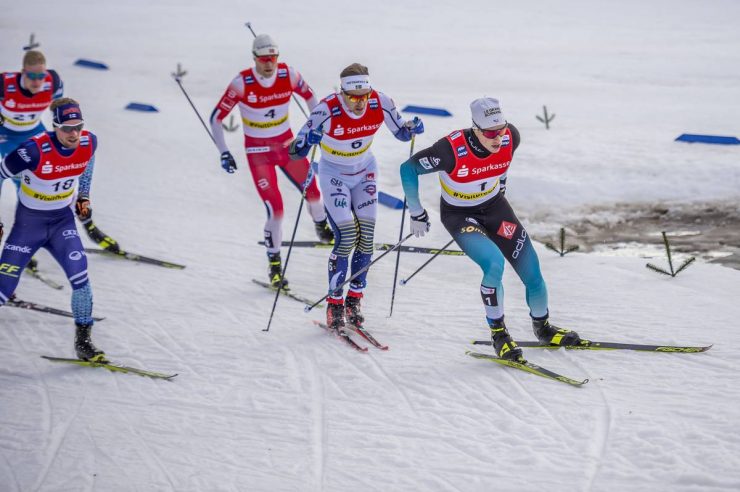 Lucas Chanavat of France (bib 1), where he was all day, out front during the Dresden city sprints. (Photo: NordicFocus) 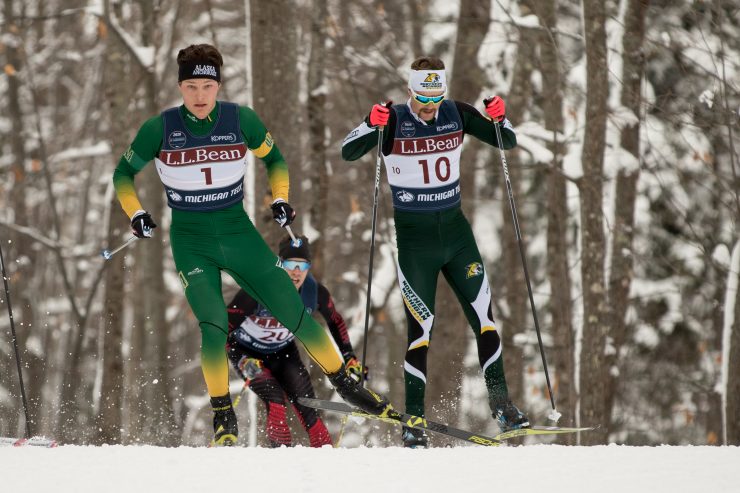 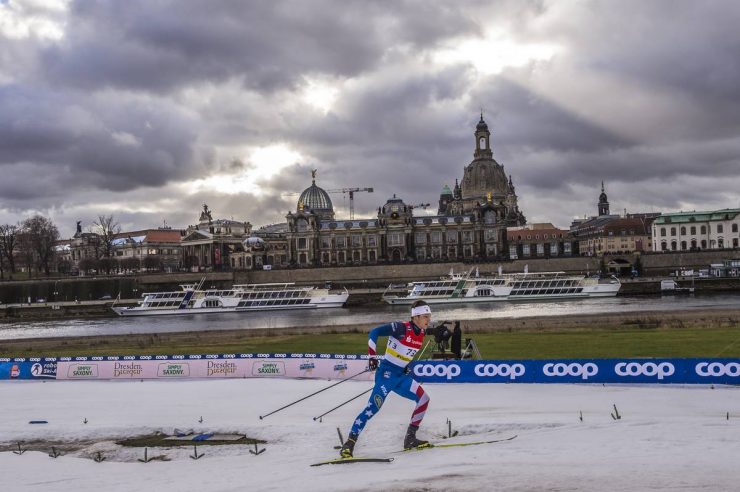 JC Schoonmaker in the points for the U.S., during the Dresden, Germany skate sprint. (Photo: NordicFocus)

Stats aside, this was a tricky course for a basic two-lap oval sprint race. Crashes and slides were plentiful. Staying on your feet, an obvious must, was problematic for some. Most notable was a clash during the fourth quarter, where France’s Richard Jouve clipped the back of Italy’s Federico Pellegrino’s skis. It occurred on the lap corner where skiers seemed to be magnetically attracted to the tightest line up against the v-boards.

Not a bad tactic. But the high risk move didn’t always pay off. Pellegrino went down, as did Jouve, in a gnarly tumble. Pellegrino took a moment on course to disparage Jouve. Both skate sprint savants, Pellegrino placed an uncharacteristic 27th and Jouve 22nd.

The scene was a reminder that those who fired from the start, got out front, and remained there, set themselves up for success. With no true kicker hills on course, coupled with the high speed tracks, remaining in the front and out of trouble proved to be the recipe for success.

Chanavat played those tactics to perfection. He won his quarterfinal, semi-final (in a photo-finish with Norway’s Sindre Bjørnestad Skar), and the final by skiing boss-like out front in 2:14.81. 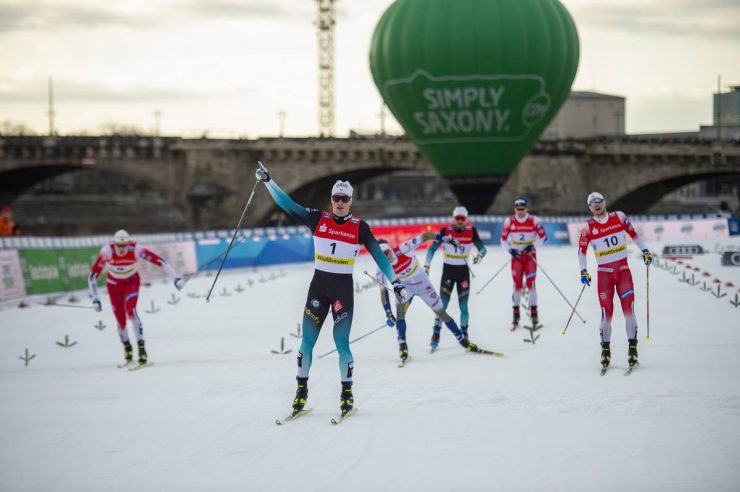 The only mishap in the final was for Håvard Solås Taugbøl of Norway, who snapped a pole early on the first lap. Skiing the remainder of the lap with a single pole, he ultimately placed sixth, only 1.86 seconds back.

“I felt good today, especially in the final stretch,” Chanavat told FIS after the race. “I saw the crazy falls because Richard Jouve is usually fighting there (in the 180° turn) during the final and he was unlucky today again but he will be back stronger soon. I was hoping for a World Cup victory this year but I was not expecting it to happen so fast.” 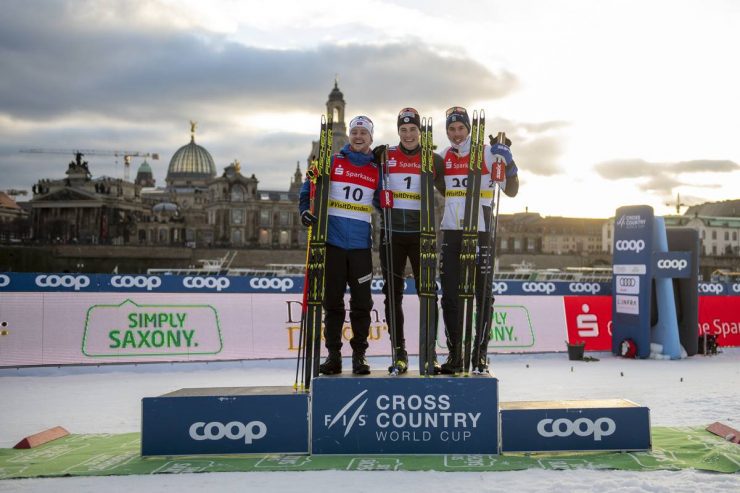 The men’s podium on the streets of Dresden. Lucas Chanavat (FRA) takes the win ahead of Sindre Bjørnestad Skar (NOR) and Johan Haeggström (SWE). (Photo: NordicFocus)