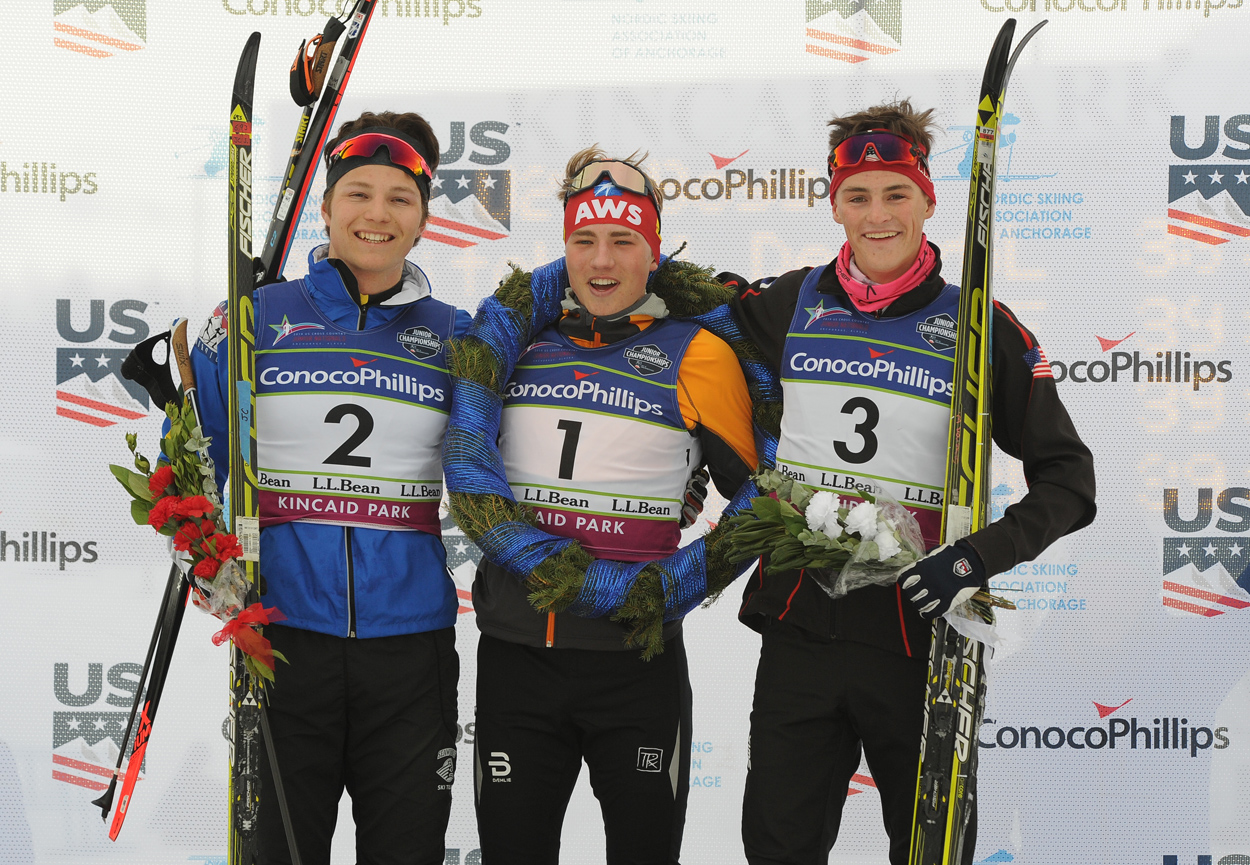 Logan Smith (Sun Valley SEF/Intermountain) recovered from a fall midway through her U16 5K classic
race to take her second win of the week. And Sophia Laukli (Stratton Mountain School/New England) was
a surprising but strong winner of the U20 10K race.

A loud crowd showed up on an overcast, windy and sometimes snowy day for the always exciting classic
mass start format. Friday’s course covered 5K. Skiers lined up seven-wide in the start area’s tracks, most charging out in a double-poling frenzy at the gun, creating the occasional pileup, more than a few broken poles, and just as
many upset skiers.

The course was technically challenging, packed with variety – a few long and steady
hills, one big, steep climb (Gong Hill), lots of flats, and enough curves and corners to force skiers to
remain focused on each kick and stride. No single classic technique strength would prevail on this course.
Midway through the loop, racers returned to the stadium briefly and turned sharply up the Gong Hill, many
double-poling in the tracks. They then took a tunnel under Raspberry Road and returned to the stadium
from the south-end tunnel for a quick, flat ride before disappearing once again to a short, curvy hill
section, which ended with a tight turn at the bottom followed by the flat 100-meter finish zone. U16 skiers
raced the loop once; U18 skiers and U20 women tackled two loops; and the U20 men took three laps.
U20 men 15K classic mass start

Gus Schumacher (Alaska Winter Stars/Team Alaska) made skiing hard look easy as he led from start to
finish in the day’s longest race. He was stout, smooth and unrelenting in his intensity despite steadily
building his lead throughout the race.

After lap one, he held a three-second lead; after lap two, he was ahead by almost a minute. Whenever he
was visible from the stadium, he was double-poling and striding like he was being chased by someone
trying to take the World Juniors gold medal he earned with a historic relay team win in January.

“I’m confident in my classic skills, but you never know until you’re out there,” he said. “And the crowds
kept me going hard for the rest of the race.”

He was equal parts Mr. Popularity and Hometown Hero after the race, receiving a long line of hugs from
family, friends, teammates, officials, coaches and competitors.

“This was such a fun week and so many people came out to cheer for me,” he said. “That made every
race really exciting.” 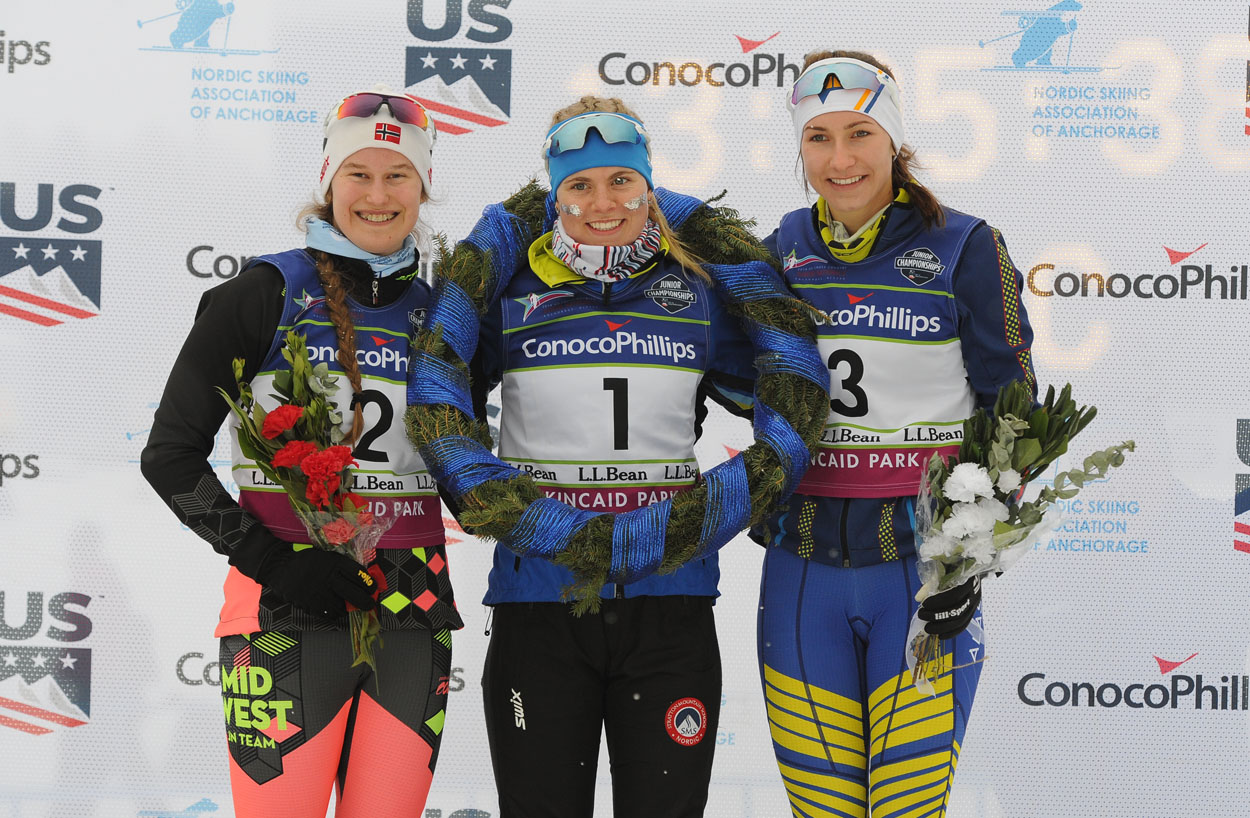 Ever the Top 10 finisher, rarely the victor, Sophia Laukli (Stratton Mountain School/New England)
surprised everyone – including herself – with a win in the U20 women’s 10K. Even after pulling
comfortably away from the pack in the race’s final two kilometers, she still wasn’t convinced that an
elusive Junior Nationals title was a lock.

“I was expecting a sprint, but I couldn’t hear anyone behind me,” she said, windblown cheeks covered
with glitter. “I was afraid to turn around and look, so I finished as if someone was right behind me.”
That final kick gave her a 29:20.5 finish, more than six seconds ahead of Hannah Bettendorf (College of
St. Scholastica/Midwest) at 29:26.8. Aubrey LeClair (APU/Team Alaska) was third at 29:30.8 in the 35-
skier field.A common saying of mass starts is, “The race isn’t won in the first 100 meters.” That doesn’t stop skiers
from bursting out of the starting area like maniacs, which often leads to tangles and pileups, broken poles
and hurt feelings. Laukli takes a different approach: she lets the crowd sort itself out, and then she starts
taking skiers down one by one. And that’s exactly how her confident win played out Friday.

“It’s chaotic at the beginning, aggressive skiing,” she said. “I stayed chill, then made my move.”
By the end of the first 5K loop, Laukli was leading a tight pack. From there, she methodically pulled away.
“By the last K, I had a pretty fair gap that I felt good about,” she said.
She also felt pretty darn happy about her win. 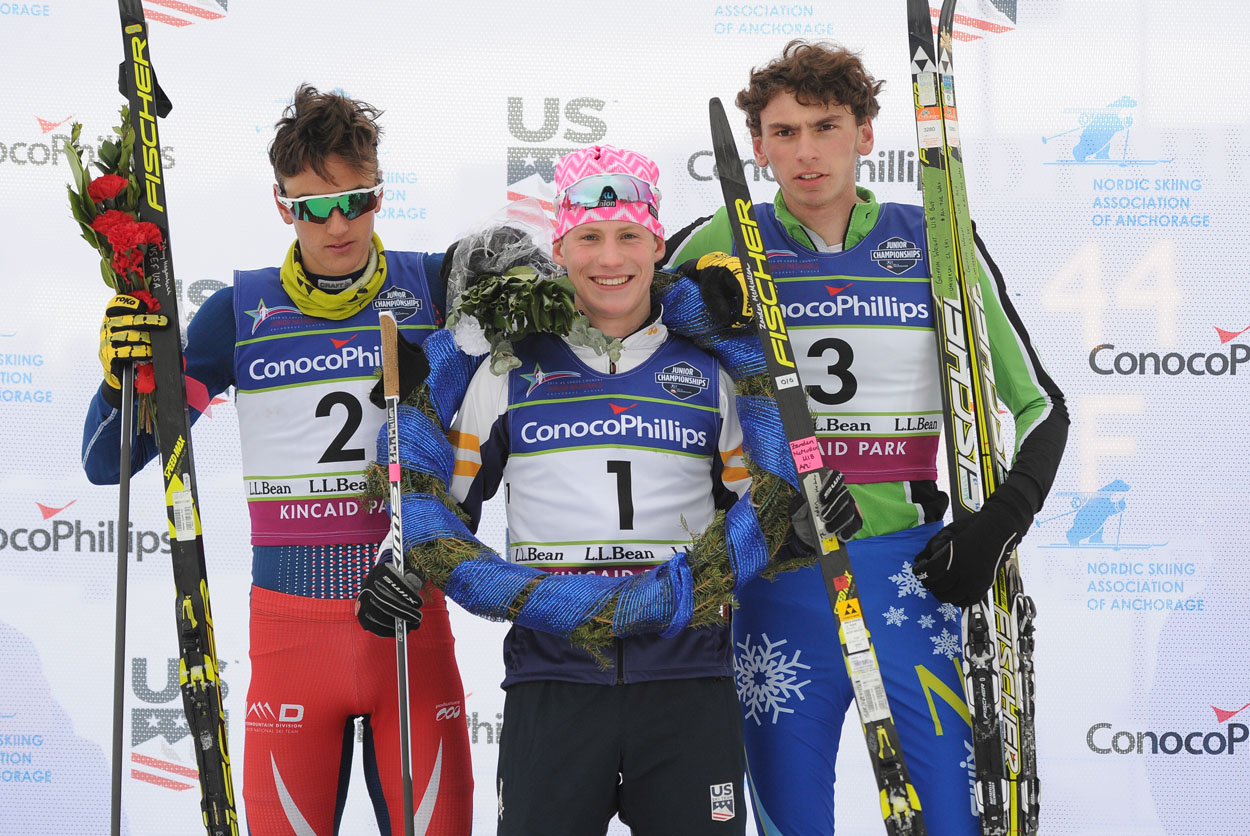 U18 men 10K classic mass start
After a day of blowouts, with one kilometer to go in the U18 men’s 10K classic – the fifth of six races –
was setting up to be the only exciting finish of the day. Spectators ran from the base of the Gong Hill,
where leaders Zanden McMullen (APU/Team Alaska) and Johnny Hagenbuch (Sun Valley
SEF/Intermountain) climbed practically side-by-side. Fans then ran to the stadium’s south-end tunnel,
where barely two minutes later the duo sped by with McMullen taking a small lead along the flat area.

The pair disappeared again for the short set of hills and turns as fans rushed to the finish line area. But only
one skier immediately came into sight at the top of the final hill and onto the 100-meter finish zone: it was
McMullen, who eliminated all drama and doubt in this race.

McMullen’s 25:42.4 was 4.5 seconds faster than Hagenbuch (25:47.9). The rest of the 89-skier field was
more than 7 seconds back; Griffin Wright (Craftsbury Nordic Ski Club/New England) was third at 25:55.3.
It was a perfect ending to week of second-place podium visits for McMullen. He was second among U18
skiers in Monday’s 10K individual freestyle and second again in Wednesday’s classic sprints.
“I’ve had a good week – I’m absolutely stoked,” he said. “It’s really cool.”

The cherry on top came Friday with his fiery finish. Even with Hagenbuch (who also podiumed three times
this week) tracking closely behind, McMullen said, “I couldn’t tell where Johnny was. I just put my head
down and kept going hard. I knew if he was with me, I wouldn’t be 100 percent sure that I’d beat him.”
That shootout never materialized as McMullen finished with a flourish and Hagenbuch, who fought off a
cold all week, faded.

“We came into the stadium and he went by me,” Hagenbuch said. “And I just didn’t have it today.” 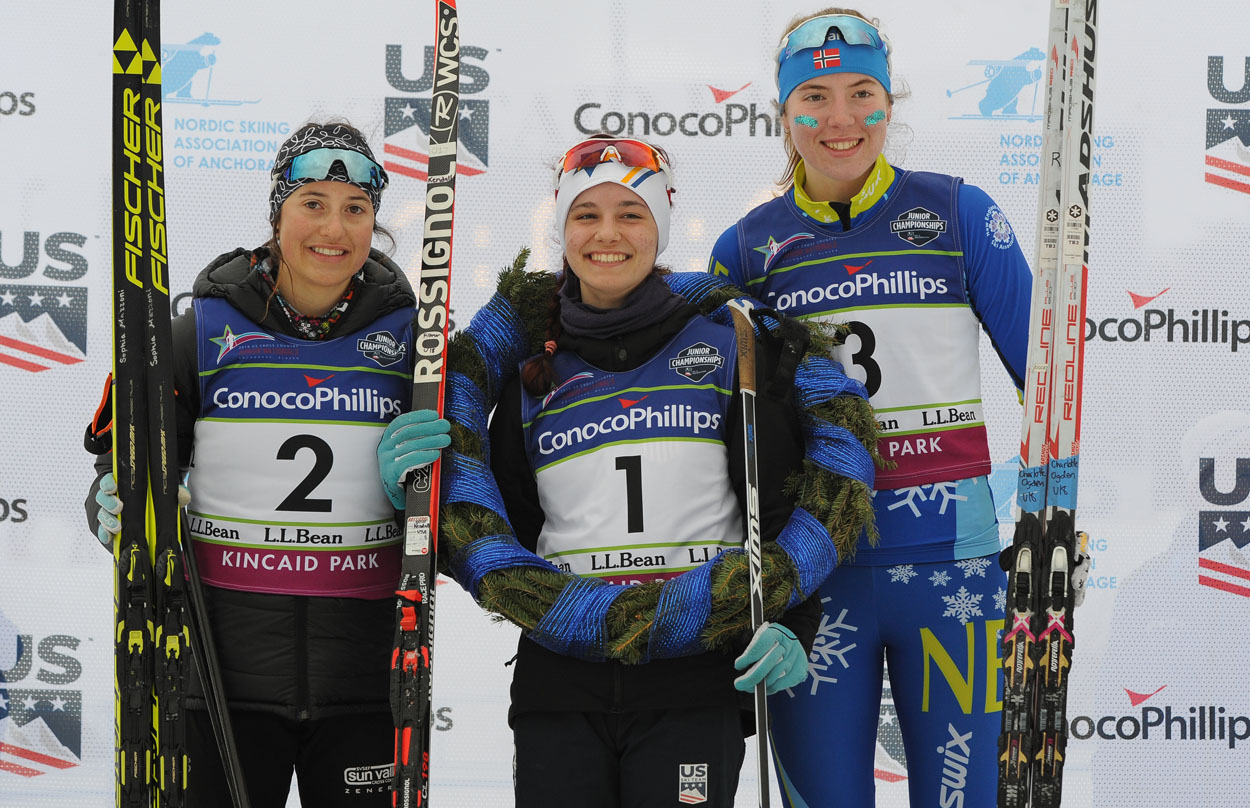 The race had 83 finishers. Kramer set a tenacious tone at the start, instantly double-poling away from the masses and taking off for good, with only Mazzoni and Ogden hanging on for the first 5K. Kramer stepped up her pace in the
second 5K, creating space on Mazzoni and dropping Ogden. With the finish nearing, Kramer emptied the
tank and burst away from Mazzoni.

“There was one point where she kicked it in really hard,” Mazzoni said. “I tried to reel her in, but just
couldn’t.”

That was Kramer’s plan. A mean hill climber on a course with very few large hills, she knew that grabbing
an early lead would give her the best shot at a win.

“To be honest, I wasn’t expecting to be in a group very long,” Kramer said. “Sophia is amazing and I didn’t
want it to come down to a sprint.”

The three-race sweep came near the end of a crazy 2019 ski schedule for Kramer. She made a name for herself with impressive finishes at U.S. Senior Nationals in early January, posted a spectacular fourth-
place finish at World Juniors in late January, and then claimed her second-straight Alaska high school Skimeister title in February. And now, a three-race Junior Nationals sweep.

“I was nervous, this being my first year of U18 racing,” said Kramer. “It feels really awesome that I’ve
maintained my fitness since (Senior) Nationals and peaked at the perfect time.” 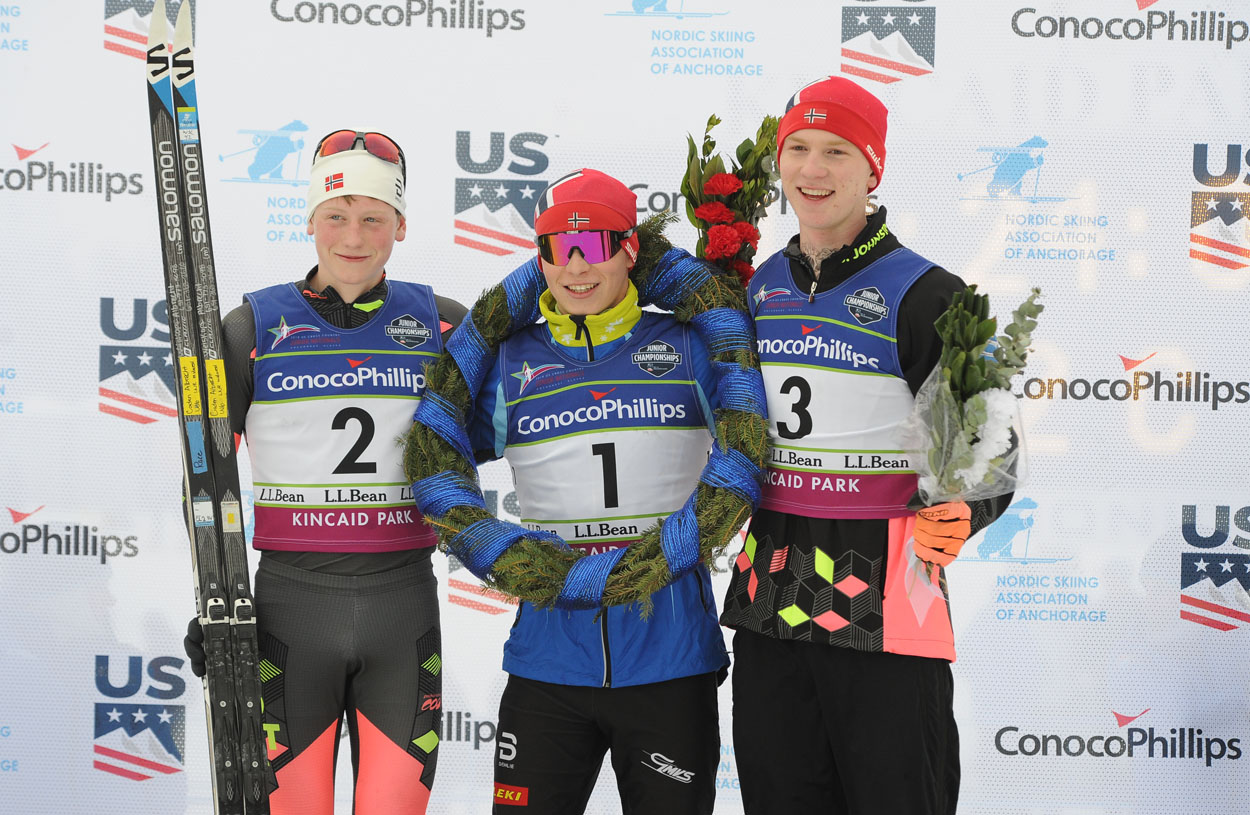 U16 men 5K classic mass start
Trey Jones (Green Mountain/New England) was having himself a very good week after finishing second
in each of the first two races of the week. Friday, his week officially turned spectacular. He used a
powerful final push over the last kilometer of the men’s 5K classic mass start to escape the pack, finishing
with a stride that shot him directly to the top of the podium.

“After two seconds, I just wanted to take that extra step up (on the podium), and I did it,” he said with a
big grin. “It feels amazing. Unbelievable.”

Even with all the food and fun, events and distractions of the JNs experience, Jones said he was
disciplined all week with resting and eating well. This gave him a fresh-legs feeling Friday, despite his
trying racing week. Monday, he finished second in the 5K individual freestyle, 12 seconds back;
Wednesday, he finished a grueling day of classic sprint racing by getting edged by a toe in the finals.
Friday had a different ending. He stayed near the front the entire race, and then exploded in the final
kilometer, quickly distancing himself for the two closest competitors – Caden Albrecht (Loppet Nordic
Racing/Midwest) and Jasper Johnston (Ely High School/Midwest).

“I noticed I had better energy and better kick-glide than everyone, and my skis were really fast,” he said.
“So when I got to the final K, I said, I gotta go now! I don’t want to have to sprint to the finish.”
That wasn’t necessary. Jones clocked a 13:10.8, nearly three seconds ahead of Albrecht (12:13.5).
Johnston was third at 13:14. A field of 72 racers finished the event. 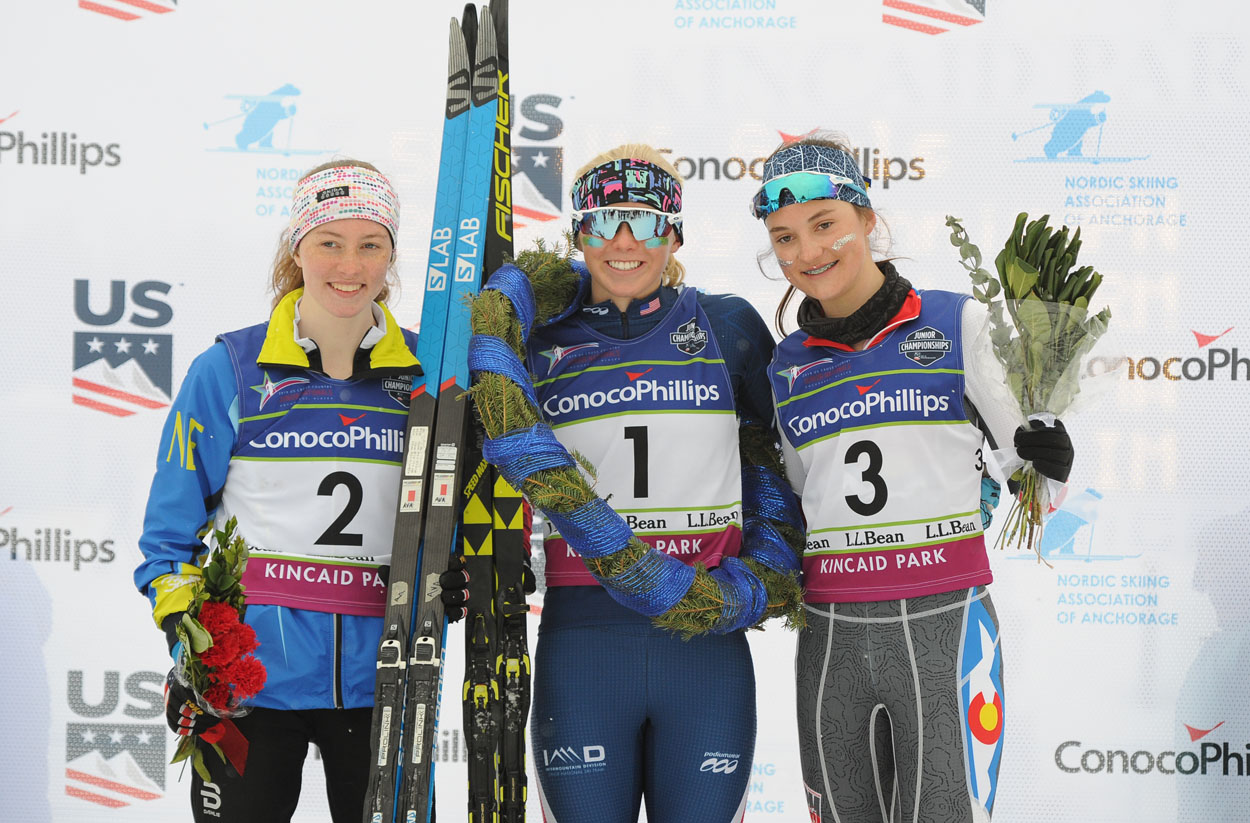 U16 women 5K classic mass start
Good thing Logan Smith (Sun Valley SEF/Intermountain) is such a talented skier, because it doesn’t
seem like she’s a very lucky one. In Wednesday’s classic sprint final, she won despite her left ski boot
literally ripping apart at the toe early in the race. Midway through Friday’s 5K classic mass start, on a
seemingly short and mellow hill-climb, she stuck a pole between her skis and fell to the icy snow base,
instantly losing her lead and momentum.

“It wasn’t a big crash, though,” she said. “So I just hammered it really hard for 15 seconds and got the
lead back.”

And she never gave that lead back; in fact, she built on it. Smith won by two seconds, finishing in 14:42.
Ava Thurston (Mansfield Nordic Club/New England) was second at 14:44.1, followed by Elsa Perkins (Ski
and Snowboard Club Vail/Rocky Mountain) at 14:48.2.

Smith, Thurston and Perkins broke out from the 73-skier field early and stayed close with a kilometer to
go. That’s when Smith pulled away and cruised through the finish zone for her second win of the week.
“It felt like they were so close, but I was just so tired that I wasn’t even thinking,” she said. “So I just got
going and skied the last K as hard as I could.”