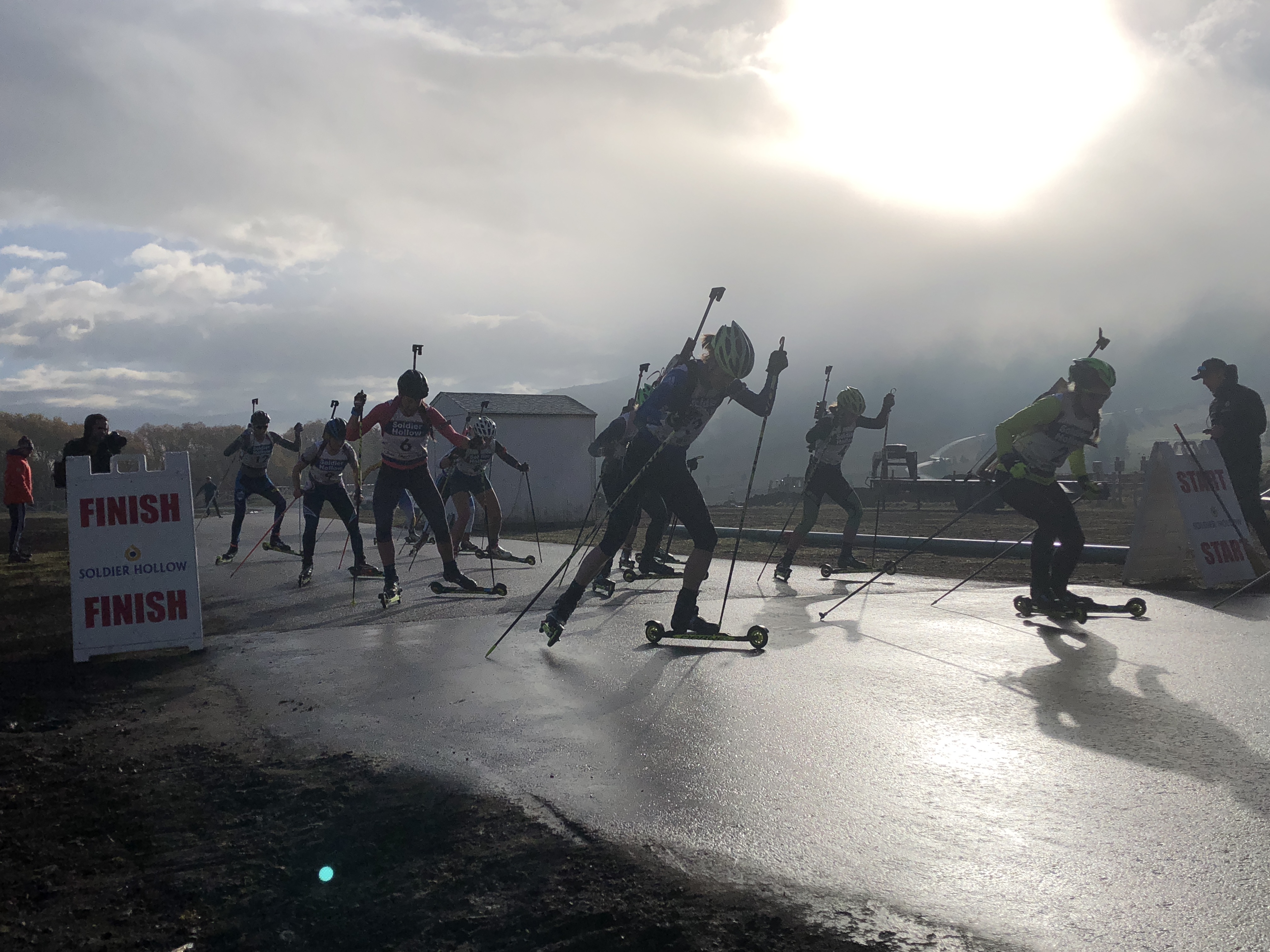 The start of the women’s 9.5-kilometer mass start at US Biathlon team trails at Soldier Hollow in Midway, Utah (Photo: US Biathlon)

Friday marked the final competition day for US Biathlon team trials taking place this week at Soldier Hollow (SoHo) in Midway, Utah. Biathletes hit the pavement on Friday for a men’s and women’s mass start roller ski race. A total of 24 senior athletes competed; 12 women and 12 men. At stake for many U.S. biathletes competing this week are are starting spots for US Biathlon’s 2018/2019 World Cup and IBU Cup teams.

Coming out on top in the senior women’s 9.5-kilometer mass start was Clare Egan out of the Craftsbury Green Racing Project. Egan missed one prone shot and two standing shots (0+1+0+2), before crossing the finish line first in a time of 30:29 minutes.

Susan Dunklee, who swept the previous days’ back-to-back sprints, crossed 1:07 seconds behind Egan for second place. In Friday’s race, Dunklee skied a total of six penalties prior to her finish (1+3+1+1).

Rounding out the senior women’s top three on Friday was Emily Dreissigacker who, after missing five shots (1+1+2+1), raced to a third place finish (+1:41).

Along with Dunklee, both Egan and Dreissigacker had reached the podium earlier this week. Egan placed second in Tuesday’s sprint; Dreissigacker took third in that same race.

“This was a great way to cap off six months of hard training,” Egan told US Biathlon. “Our team is ready to go, which we proved this week with a lot of solid performances. I haven’t been on top of a podium in a long time and it was fun to share it with my friend Paul [Schommer] today. He’s a very positive teammate and that kind of energy makes everyone stronger.”

The senior men raced a 13.5 k mass start on Friday, with Paul Schommer taking the overall win. Schommer cleaned both prone stages and missed one standing (0+0+1+0), crossing in a time of 34:58 minutes for the win.

Finishing eight seconds behind Schommer was Sean Doherty in second place. Doherty, who won the senior men’s sprint on Tuesday and placed second in Wednesday’s sprint, missed two prone shots and cleaned while standing (0+2+0+0) on Friday.

Taking third place on Friday in the senior men’s mass start was Travis Cooper, a member of US Biathlon’s Senior Development Team. After skiing three penalties (1+1+0+1), Cooper crossed 50 seconds behind Schommer and 42 seconds behind Doherty.

“The camp in Utah has been great and ending it with a win is even better,” Schommer told US Biathlon. “I’m just thankful to have the opportunity to race and am excited to get back on snow soon … Also, was definitely inspired by Clare’s win earlier in the morning,” he added. 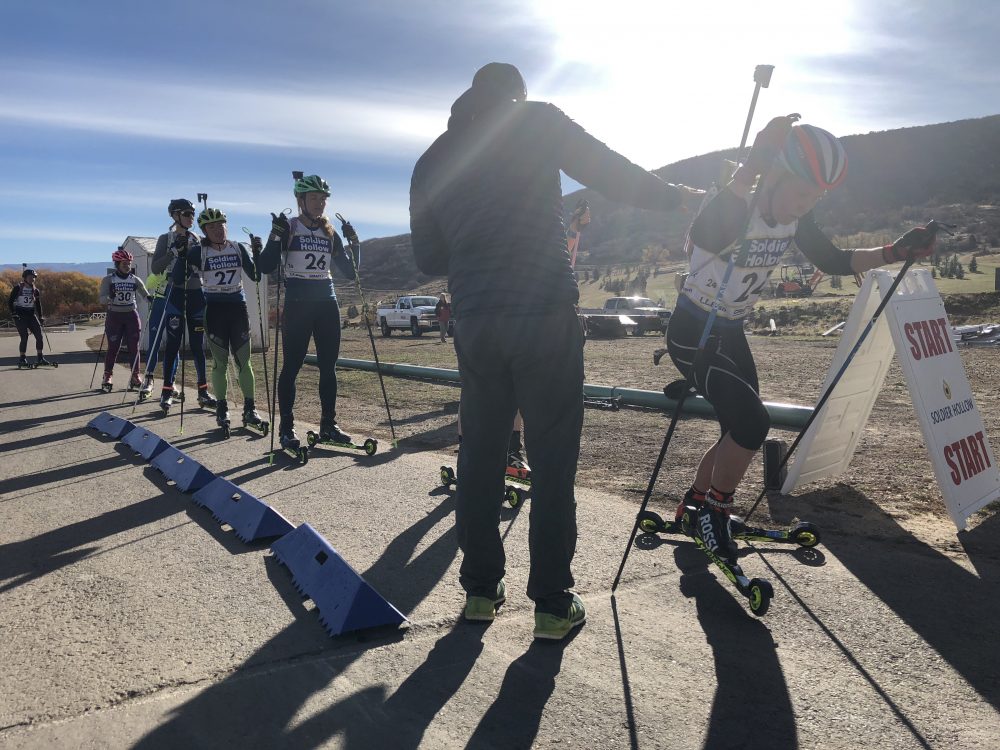 Kelsey Dickinson (24) gets on course for the women’s 7.5-kilometer biathlon sprint for USBA SoHo trials on Tuesday, Oct. 30. Emily Dreissigacker (26) and Hallie Grossman (27) look on. (Photo US Biathlon)

According to an email from US Biathlon Sport Program Manager, Danika Frisbie, team nominations will be announced on Monday, Nov. 5 “after a meeting of the International Competition Committee (ICC).”

Nominations, according to a US Biathlon press release in late October, will take into consideration the results from Soldier Hollow as well as results from the Jericho, Vt. rollerski trials that took place this past August. Point totals will be calculated by using each athlete’s three best out of five race performances.

A few athletes, as noted in a spring US Biathlon press release on selection criteria, have pre-qualified for World Cups 1 through 3.

For athletes who are not pre-qualified, nominations will look to fill:

A list of pre-qualified athlete names was not available upon request. However, Dunklee, Egan, Joanne Reid, Doherty and Leif Nordgren, according to IBU official results, have pre-qualified.

In April, US Biathlon published a piece on the 2018/2019 High Performance and Development Team nominations. Those were listed as follows: