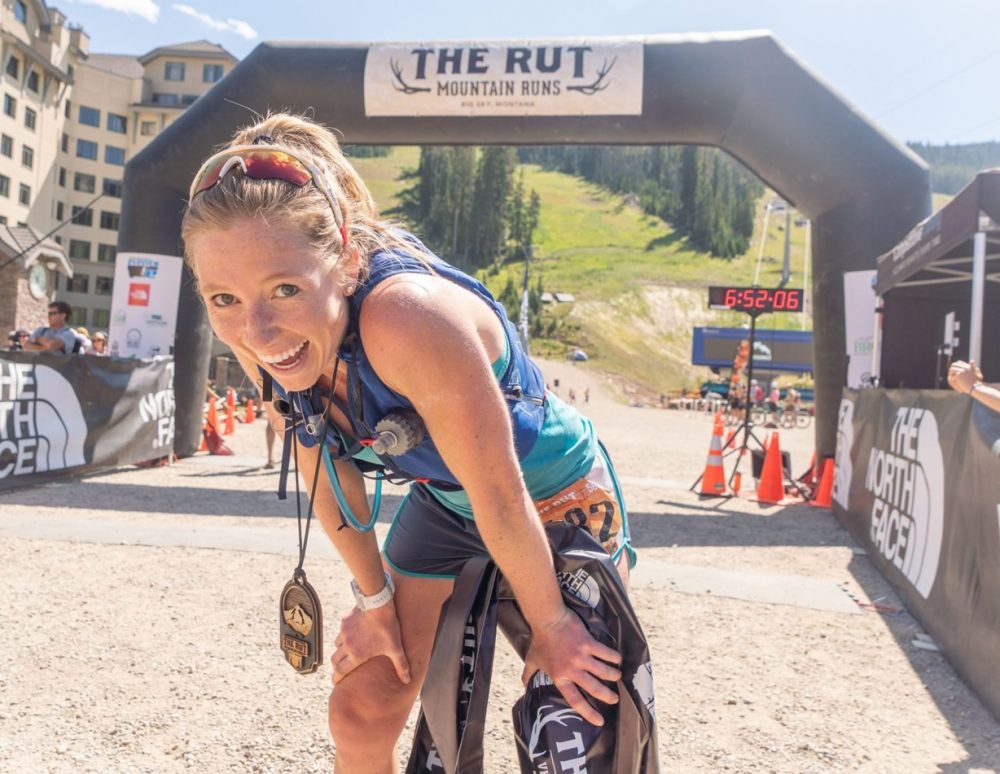 Just shy of thirty-years-old, Bozeman’s Erika Flowers stills revs her aerobic engine up and over the big hills. The news that she had won the 50-kilometer The Rut mountain running race at Big Sky Resort outside Bozeman, Montana was a surprise to some — primarily to Flowers herself.

She pulled away from full-time ski training last winter, but the 9,951 feet of climbing during The Rut proved she’s a multi-sport talent.

Even with her reduced training last year and a step away from her Vermont based SMS T2 training group, Flowers impressed on the ski tracks. She placed fourth in the first 2019 Super Tour set of races: a 1.3 k skate sprint and 10 k skate in West Yellowstone. At U.S. Senior Nationals she was sixth in the 20 k mass start skate. Issues with fitness as she transitions to a more balanced work-sport life appear to be a non-issue.

We interviewed Flowers on September 12th. The interview has been lightly edited for clarity.

FasterSkier: Tell us a bit about the transition from full-time skier.

Erika Flowers: Last year Andy [Newell] and I moved to Bozeman and honestly I did not have a clear plan of what I was going to be doing. We both were ready for a shift and I was at a point, at least with skiing, where I wasn’t as competitive as I needed to be at my age to be eligible for the types of races and competitions that I wanted to be racing in. So I knew that I had to do something a little bit different. And there is also a huge part of me, I love skiing and I wish I could do it at a high level forever, that has interests outside of skiing. I was interested in getting some different experiences and professional experiences in particular.

I had looked around Bozeman and ended up getting hired by this firm called Profitable Ideas Exchange, which is international in scope but based in Bozeman. It has been around for about 20 years, but in the past maybe five or six years, it has grown quite a lot. We work on behalf of large professional service firms.

Essentially, we build out executive round tables of the people a client would be most interested in getting to know and eventually doing business with. And we have round table discussions with these groups while placing our client at the center of this conversation to help them develop relationships.

FS: Was there a risk taking this job or did you know it would be a solid fit? It sounds like a lot of interpersonal interactions in this type of position.

EF: When I was looking for different opportunities around Bozeman, I made a spreadsheet of potential areas I would want to work and at that point, I was like ‘if I don’t find something I really want to do, I can always keep skiing.’ I think what drew me here was the level of interpersonal interaction. So I think what I enjoy the most about this role is that I get to connect with people.

I tend to be a relatively social person and I enjoy networking with people, and that is where I was generally looking and that is the part of the job I enjoy the most.

FS: What have you been most surprised by when it comes to your new career?

EF: I think one thing that is interesting, and I think this is true for a lot of skiers that have that competitive side of them, I got put on the sales team here after a few weeks. The way that sales are framed, at least at my company, is that it is all about just making new friends. Our sales cycle is very long. So a lot of it is getting to know people and finding what is important to them and also figuring out how we can benefit them. And it is an area that I never thought I would enjoy doing. Sales can be a kind of dirty word for a lot of people, but I have really enjoyed it and getting to know people. And it is a challenge kind of like racing — you are testing yourself against others. 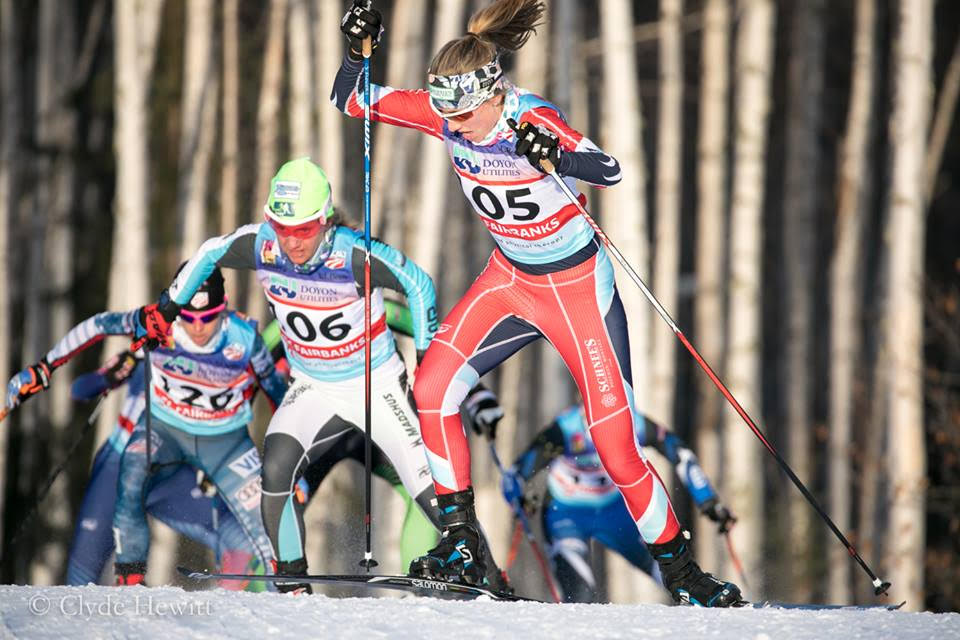 Erika Flowers (in red) racing at 2017 SuperTour Finals in Fairbanks, Alaska, where she posted a best result of third in the skate sprint. In the last six years, Flowers has reached the SuperTour podium 16 times and finished the 2017/2018 season fourth overall. (Photo: Clyde Hewitt)

FS: You clearly are in running shape. Will you be ski racing this winter?

EF: The short answer is yeah. Last year I wasn’t sure I was going to. Anybody who has been a full-time racer and you have decided to change —  that is hard. Last year I left skiing really loving it still but recognizing that my results were not what they needed to be to keep doing it full time. So, I waded into a couple of races at the beginning of the year to see how they went. And obviously, I still do plenty of rollerskiing and training and I enjoy staying fit, and those races last year went pretty well.

This year I am going to do some of the longer races like the Birkie and the Boulder Mountain Tour. And then, I think I am going to jump into some of those first SuperTours. Last year I remember deciding to race them the day before. This year I will plan ahead a bit better and make some reservations in advance. I plan to do the first two SuperTours and see how those go. And my barometer for success these days is this: ‘is this still fun for you?’ If it is still fun, I will plan to do some other ones.

I’m not sure if I am going to Houghton for Senior Nationals. But I will be going to the Canmore and Sun Valley SuperTours.

FS: OK, the latest and greatest – your win at The Rut. Were you surprised by that performance?

EF: Yes, 100 percent. I had never run that far before. I knew there were some other quick and more experienced people in the race. I had done the Bridger Ridge Run last year in Bozeman and that was really tough for me. I went into the Ridge Run like ‘yes this could be my thing.’ I left that day like ‘clearly this is not my thing.’

I think this year, at least for The Rut, my plan going in was to have fun. My sister and I had trained together and we were both simply hoping to get it under our belts. I had no expectations and certainly not a podium. Beforehand someone asked what my 1-2-3 goals were. I said something like, ‘my best day ever goal was top-five or something and under seven hours.’ Having never done something like that, I had no idea how to set expectations for what was possible. 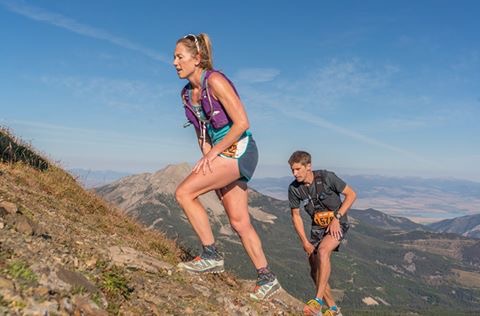 FS: What was your strategy having never raced something like that?

EF: I started out pretty conservatively. Last year when I had done the Ridge Run, and really suffered, I had gone out a little hot. Andy said to just go out like you are going for a long run.

I did that. I simply figured I was in 20th or something. And then coming through the second aid station, my buddies told me I was in fifth place and third was not too far away. That was already way beyond what I expected.

FS: You must have caught some more runners out there.

EF: I then caught fourth, and then going up and over the headwaters, I was with a group of guys, and they were saying third place is just three or four minutes ahead of you. And I didn’t expect to catch them. The downhills are my forte and I knew there was a big downhill coming up and I was moving well that day and feeling good. I was able to catch third place on the downhill and then second. And then heading up Lone Peak, the biggest climb on the course, the first place runner was Kristina Trygstad-Sarri. She is really a phenomenal mountain runner. But she was running towards me as she had hurt her foot and pulled out.

From then on I just kept moving and moving relatively quickly.