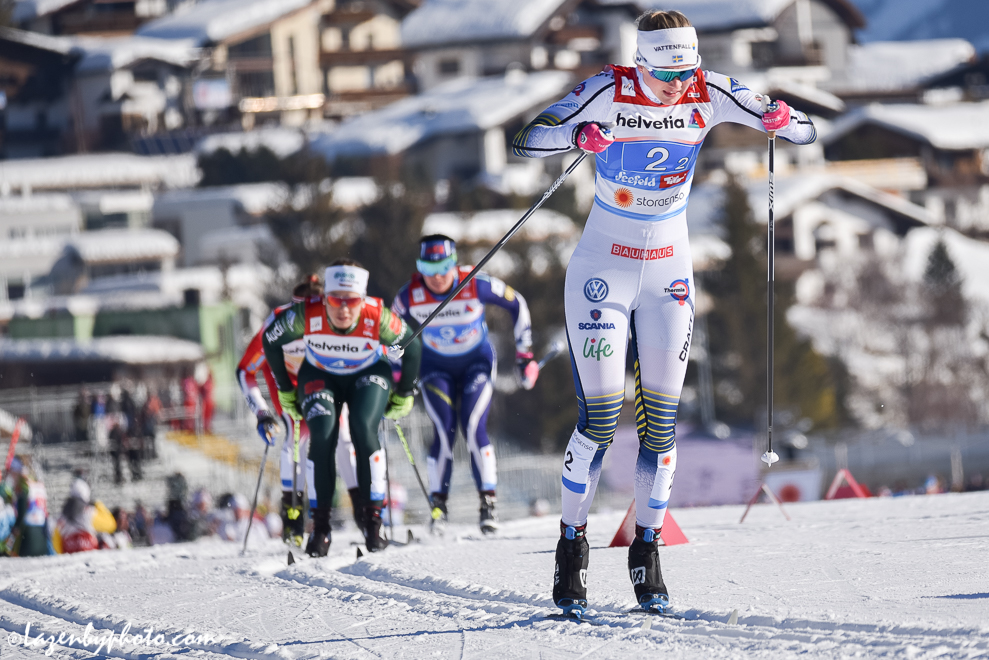 Icy tracks and a relatively flat course made for a tight race in Seefeld, Austria for the women’s 6 x 1.2-kilometer classic team sprint. Even in the final meters as the women charged up the last climb and double poled to the finish, the winner was not clear. In fact, the three fastest teams were within one second of one another. The resulting time difference between first and fifth place was less than the difference between the gold and silver medalist teams in Lahti, Finland in the 2017 World Ski Championships.

A team sprint can often play out like a jack-in-the-box; in the first four legs, the women look calm and controlled, steadily winding up the tempo as the race progresses. The final two legs are explosive.

This was the case today as Norway’s Maiken Caspersen Falla tagged her teammate Ingvild Flugstad Østberg for the last time amidst a pack of seven nations all within three seconds. Østberg powered through the course with a fiery purpose, trying to create a gap that would allow her and her teammate to repeat their victory in the event during the 2015 championship. Her move was matched by the teams from Sweden, Slovenia, and Russia, with Sadie Bjornsen of the United States just behind their tails.

Russia’s Natalia Nepryeava challenged Østberg and took the lead before rounding a hairpin turn and descending in a tuck toward the stadium, but as she tagged her teammate, Yulia Belorukova, the Norwegians, Swedes, and Slovenes all remained less than 1.5 seconds back. Bjornsen tagged her partner Jessie Diggins in fifth only 2.7 behind. 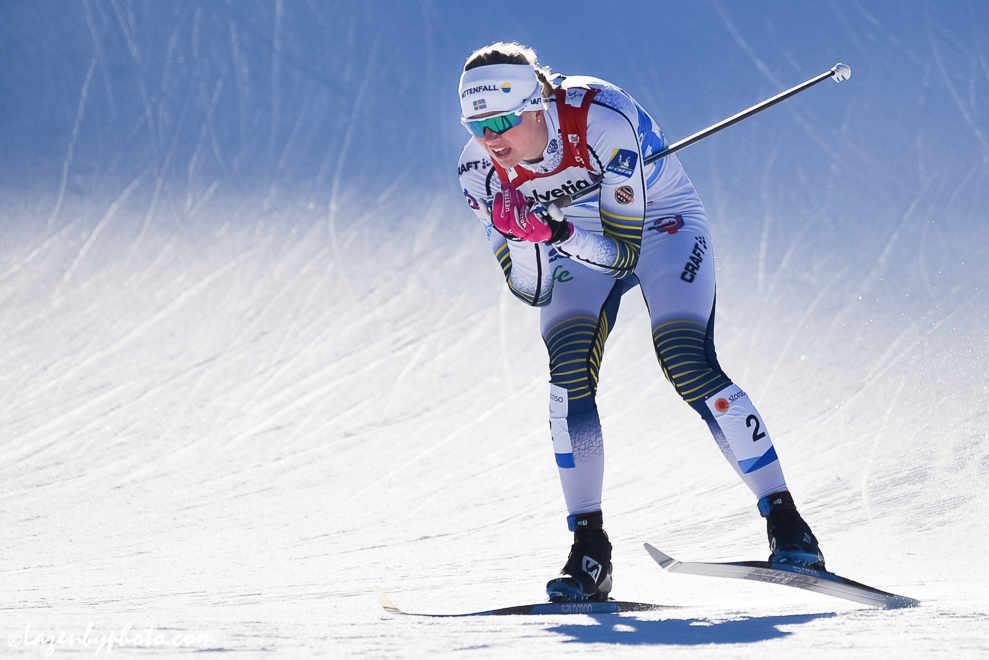 In the final lap, Falla charged to the front to take the lead for Norway. Maja Dahlqvist of Sweden and Anamarija Lampic of Slovenia went with her, as Belorukova began to fade a few meters behind. The lap seemed to dissolve in a heartbeat, as the four women found themselves rounding the last turn. Dahlqvist, who had been tucked in behind Falla, slingshot around her and into the lanes and began double poling rapidly to the finish. Falla could not match her pace, and as she lost touch with the Swede in the final meters, Lampic surged to seize silver.

“Really really good,” added Dahlqvist as the two laughed. “It was really tight today, but I felt strong in the end, so it was good.”

The duo could not contain their excitement as they reflected on their narrow victory. They had already demonstrated their ability to excel on the course in Thursday’s individual skate sprint, but in the final Nilsson was unable to match Falla and a crash took Dahlqvist out of contention.

“I felt really powerful today,” said Nilsson. “I like the course – it’s very fast and you have to be very focused and not let anyone pass you in the wrong places. When Maya crossed the finish line first it was like euphoria.” 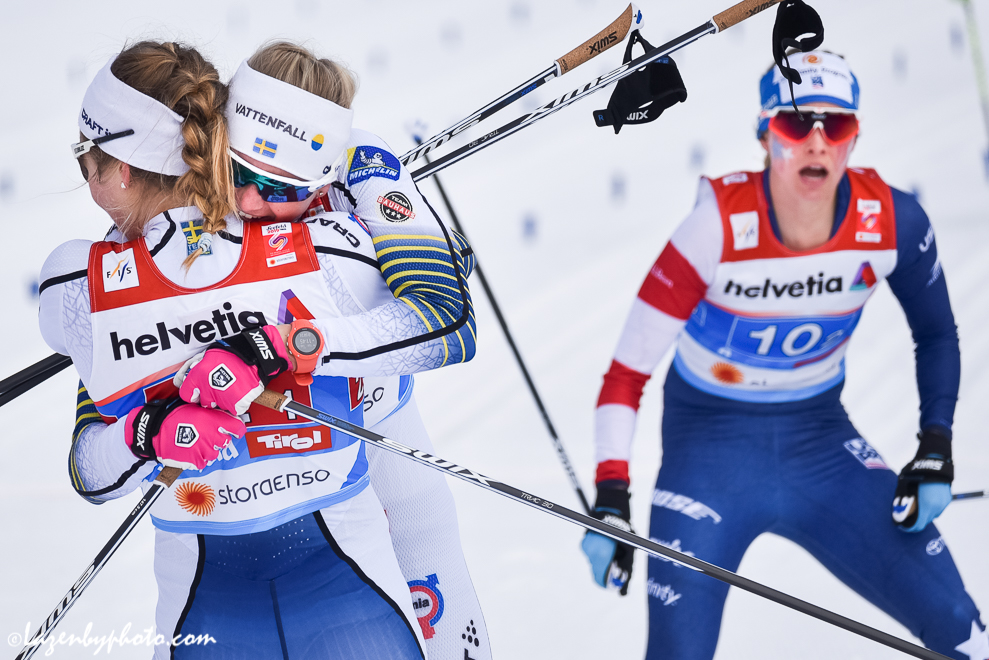 Today’s medals are the fifth in this World Championships for Sweden and the sixth for Norway. While Falla certainly hoped to add a third gold to her collection of team sprint medals, her bronze is her fourth medal in the event, making her the most decorated woman in the team sprint.

For Slovenia, earning a silver medal is a leap from their last two results in World Championships and their best result overall in a World Championship event. Visnar was part of both sprint teams, contributing to a 9th place finish in 2015 and an 8th in 2017. During the 2018 Olympics, Lampic and her partner took sixth. 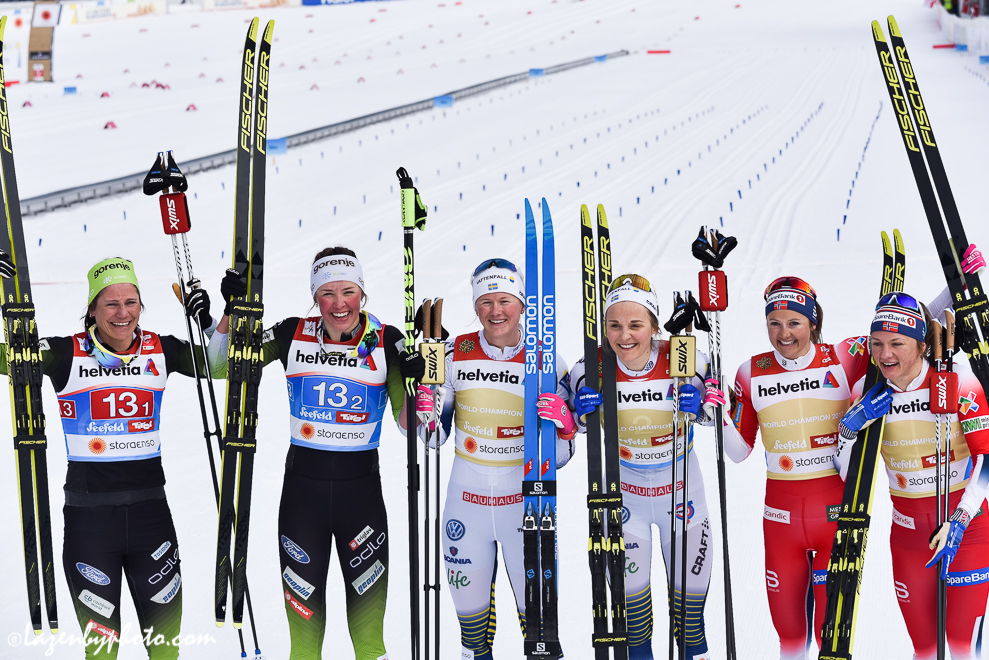 After the team of Bjornsen and Diggins finished third in the classic team sprint in Lahti in 2017, and Diggins won gold with Kikkan Randall in the skate sprint during the 2018 Olympics in PyeongChang, the United States was looking for more from today. Though both women can excel in both distance and sprint events, the short course in Seefeld was not their forte.

“It was a little frustrating for me just because – you can never pick the course, but it didn’t suit our strengths in particular,” explained Diggins in a call. “It’s situationally frustrating simply because I know that we are in good shape and we have more than we were able to show today because it ended up being about your fast-twitch sprinting at the end, and we both felt like we were a little bit stuck. We couldn’t get out to push the pace earlier in the race.” 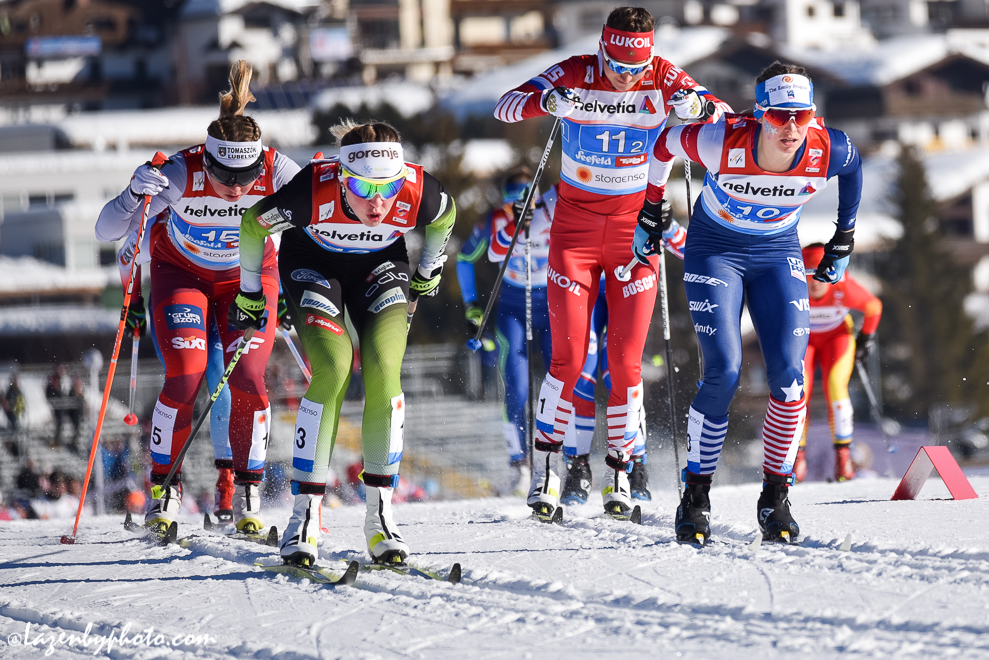 In bib 10, the U.S. Ski Team’s Jessie Diggins pulls a string of skiers along on the inside track during the women’s 6 x 1.2 k classic team sprint at the 2019 World Championship in Seefeld, Austria. (Photo: John Lazenby/lazenbyphoto.com)

Without the long climbs of the courses in Korea or Finland, racers could not spread themselves out, making the race more about tactics and raw speed, versus endurance and climbing strength.

In the semi-finals, the US team finished fourth, advancing to the final as lucky losers.

“I think that after the semi’s we were all kind of like, ‘Whoa! Okay! It’s really hard to drop people and even if you’re in the front, you’re going to get sucked up in the draft,’” said Diggins. “So if you want to push the pace, you’re going to burn so many matches while other people draft off you, so it’s a really hard course if you’re not someone who has a lot of fast-twitch because it leaves you with fewer options of what to do.”

The course used in the team event was the same as in the individual race where Diggins finished 8th and Bjornsen 18th.

“It’s cool that we got to do the sprint race on this course the other day because I learned a little bit, in a frustrating way, that it’s relatively fast and tactical,” said Bjornsen. “When I was sprinting [individually] I was trying to do the smart thing, so today I was like, ‘I’m fit enough to do the stupid thing that might include doing more work, but could put us in a good place.’ And so today, I was just trying to stay in the front and stay in contact with those front girls, and I found myself getting stuck behind a few people – behind Germany and Slovenia, I guess – and I was trying to make my way to the Scandinavian girls.” 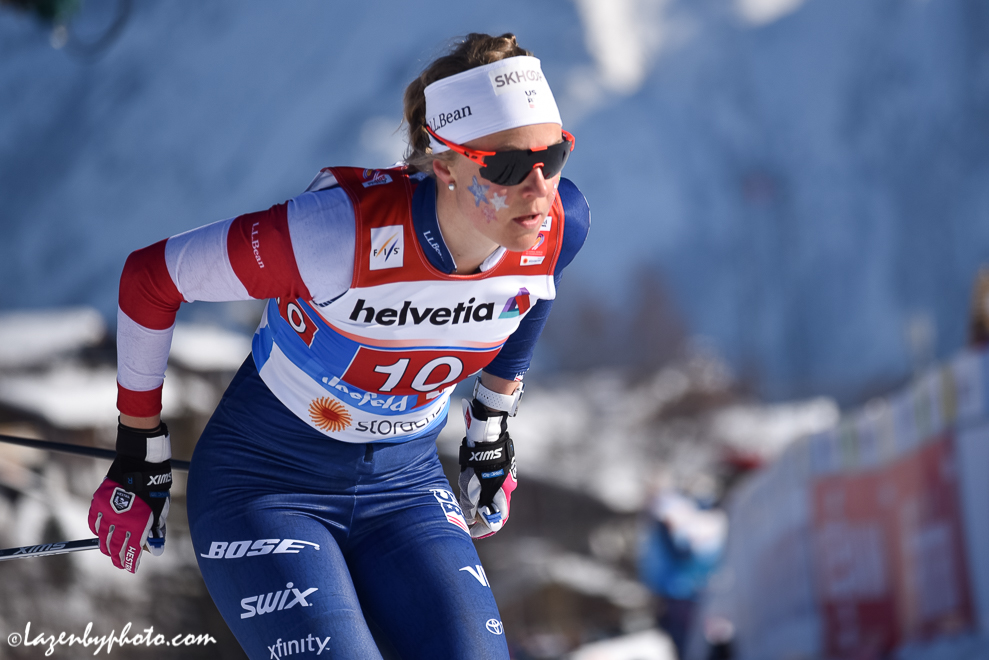 The team strategized which tactics might enable them to still fight for top positions, but because of the fast firm tracks and tight spread, they weren’t able to execute.

“I was just trying to take advantage of that huge tucking section to really put my power to use and get up there with the girls,” Bjornsen explained. “But it was certainly a challenging day in the way that it was hard to break people and hard to be in the absolute perfect position that you really want to try to get to. But I think that both Jessie and I skied the absolute best that we could and we were definitely looking for a little more difficult real estate out there. I think that we would have excelled in those conditions. … We did the best that we could, and that’s how it went.”

Canada’s Emily Nishikawa and Dahria Beatty finished 12th overall after being eliminated in the first semi-final where they placed sixth.