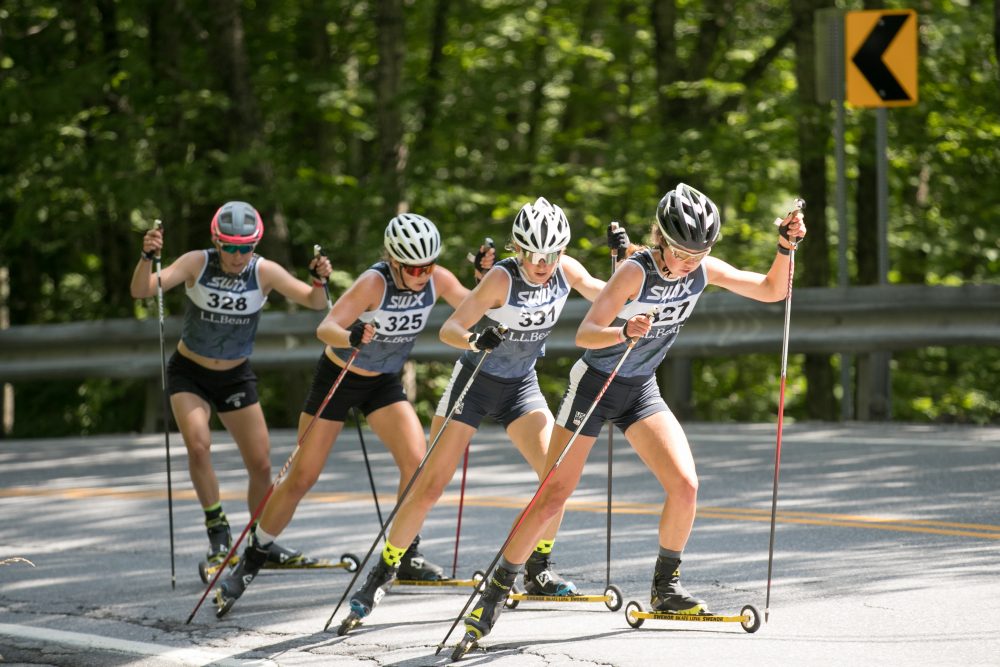 The App Gap is a rollerski skiathlon with a twist. Instead of beginning with a classic leg, the race starts with freestyle. At the Mad River Glen alpine area, approximately 5 k from the long course start, athletes change over to classic gear for the push to the finish. 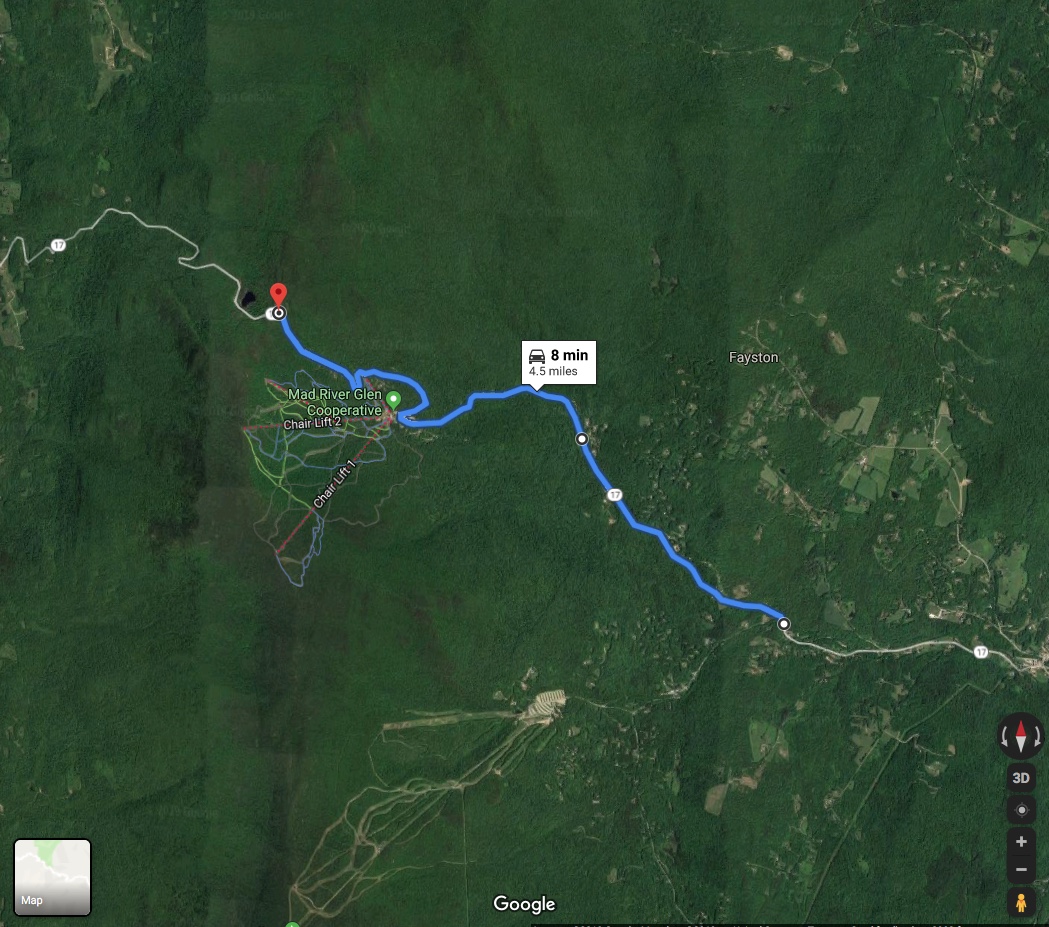 NENSA App Gap Challenge course. The finish is marked by the red pin.

In the past, the race distance was set at 7.25 k for men and 5 k for women. According to Justin Beckwith, the New England Nordic Ski Association (NENSA) competition director, coaches requested a longer course for their athletes. Thus, 17 women, including all the racers above, raced the longer 7.25 k course. Ogden’s time is the new women’s course record for the long course. Junior women skied the 5 k distance.

Working with local municipalities, Beckwith was able to get the westbound lane of Vermont State Route 17 closed for the race. The early kilometers have a fairly relaxed profile. As the skiers approach Mad River Glen, the road pitches up, with sections at thirteen and fifteen percent grade.

“This was my first time skiing up App Gap,” Hamilton said after the race. “I’ve been up a few times on my bike, so I know the road a little bit. I wanted to conserve energy down on the flats, kind of see how hard everyone else was going to ski, and just stay relaxed on the climb.  These kinds of races tend to be either really good for me or really bad. I just wanted to see what I could do, and it turned out OK.”

“Today it was pretty nice to be able to classic the upper section of the hill,” Hamilton said. “It gets so steep at the top that if you classic skied the bottom and then skated, it would really work your legs. It’s pretty nice today that we got to skate first and then classic.”

With his European race schedule many months away, Hamilton was able to use the App Gap race as a low consequence fitness barometer. 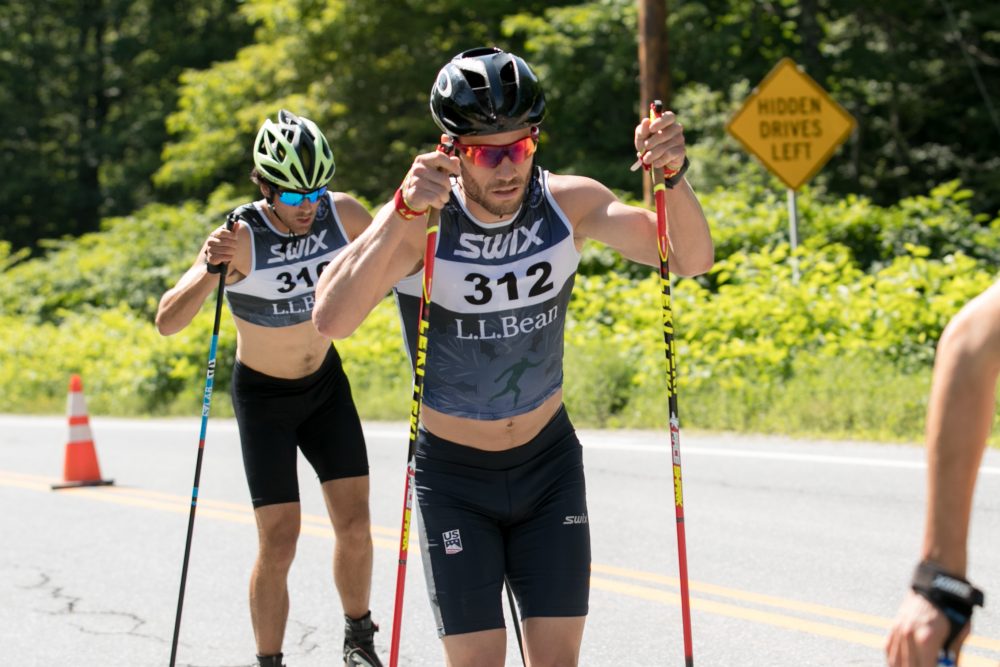 “You never know how your body’s going to feel at this time of year because we haven’t really been doing a lot of hard intervals to get ready for this kind of effort,” said Hamilton. “At the same time, it’s really good to put a race bib on and revisit those feelings of really trying to go hard.  It’s a race in August, it’s awesome to feel great, but it’s not the end of the world if you don’t.”

For Lustgarten, App Gap came at the end of the first week of a two-week block of hard training.

“It went pretty well today!” Lustgarten emailed. “I didn’t feel amazing during the warm up from the hard week of training, so I wanted to draft the leaders and just see what happened. The skate leg got tough near the transition with all the climbing. My V2 wasn’t as strong as it usually feels so I switched to V1 earlier and more often than I would have liked. But I managed to maintain contact with Adam and Simi through the exchange. I felt like I could relax in my kick double pole and tried to ski smooth and long. I felt ok and took the lead for a bit but then Simi pulled up next to me and I knew I was in trouble. We had maybe 500m to go and he picked up the pace and at the 200 m to go sign he did a nice little acceleration and dropped me. I didn’t have any other gears left. It was a solid effort 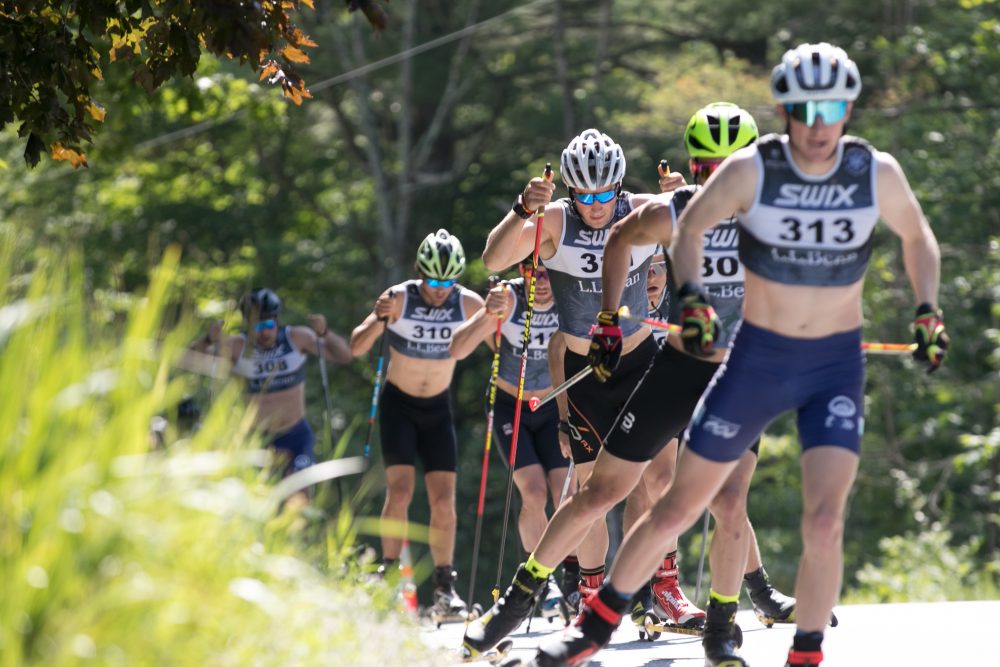 “We have had [App Gap] on the schedule for a while. It fits in well to our schedule to add a nice hard effort that is more maximal instead of longer L3 that we do during the summer. I have a mountain bike race tomorrow as well so this weekend is pretty challenging but it’s a nice mix to the standard training routine.”

Asked about her day, Ogden said, “I’ve just been doing some solid training this summer, and it’s fun to get out and train and race and hang out with all the people I don’t see in the summer. It’s cool to hang out with [CGRP] a little bit, see my SMS T2 teammates – I don’t see them too much because I’m in Hanover, New Hampshire. I didn’t have a plan [for the race], I wanted to have some fun. … I tend to do well on a lot of race efforts,” Ogden added. “It’s always good for me to get out there and get going a little bit. I’ve been doing some bike racing this summer. Definitely not the last intensity of the year.” 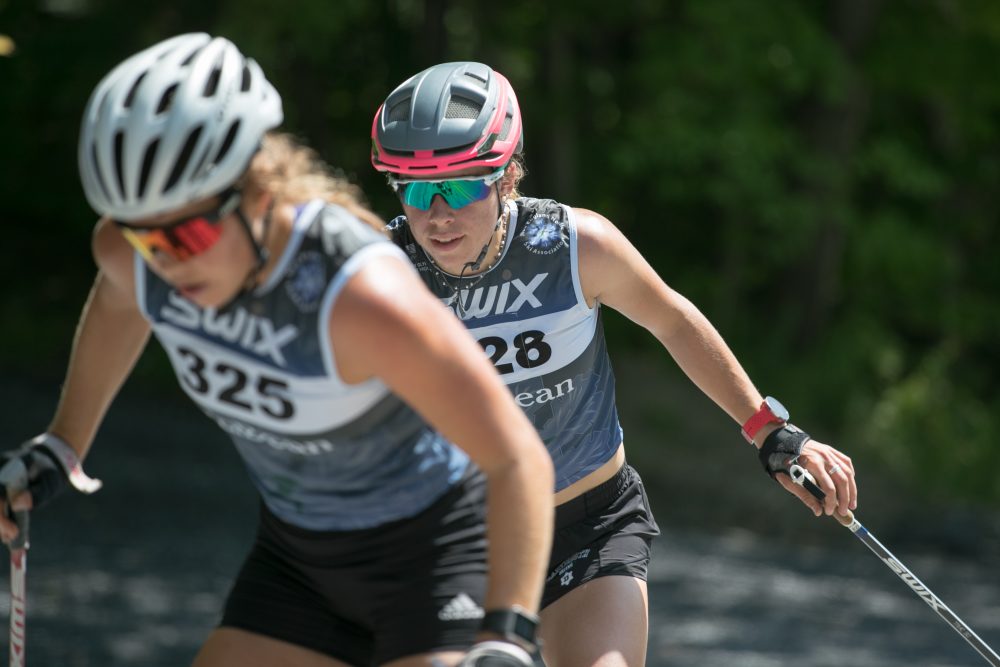 Caldwell’s App Gap experience provided an opportunity to synch her top gear efforts with the terrain best suiting her. The Vermont based skier was the fourth ranked sprinter on last season’s World Cup.

“Uphill races are generally not my strength,” Caldwell emailed. “My goal was to hang on for as long as possible and to try to conserve energy. I quickly realized that my strengths relative to the pack were the more gradual sections where I could double pole kick or V2, so I tried to save a little energy there and then match KO and Caitlin on the uphills. Caitlin led the entire skate section and then KO put in a surge on the classic that I tried to match and we took some turns leading there before she pulled away. It was a very hard effort and a nice test of fitness. I don’t read into rollerski races too much in the summer, but I was psyched with how today went!” 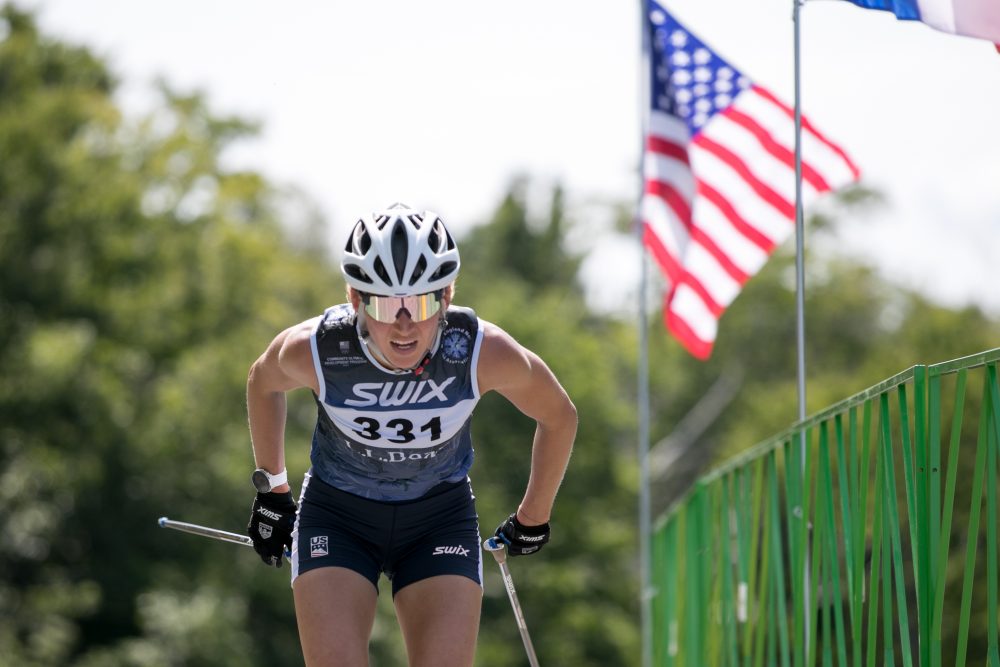 Hilary McNamee, the third-place finisher in the women’s open division is also the head coach at Ford Sayre. She said that about half of her racers came to App Gap. She sees the day as an opportunity for her athletes to remain connected to race day sensations and environment.

“It’s a hard effort that we train through,”  McNamee said. “It’s more about putting on a bib. In the summer, if you’re not hopping into local races, you lose that feeling of putting on a bib, and getting nervous, and going through the warm-up process, and finding the race zone. For us, it’s about staying in touch with racing. To have it be our nordic community hosting the race is an added bonus. These are the people we’re going to see in a couple of months on snow, and it’s that excitement around our sport, that’s the biggest piece for me.” 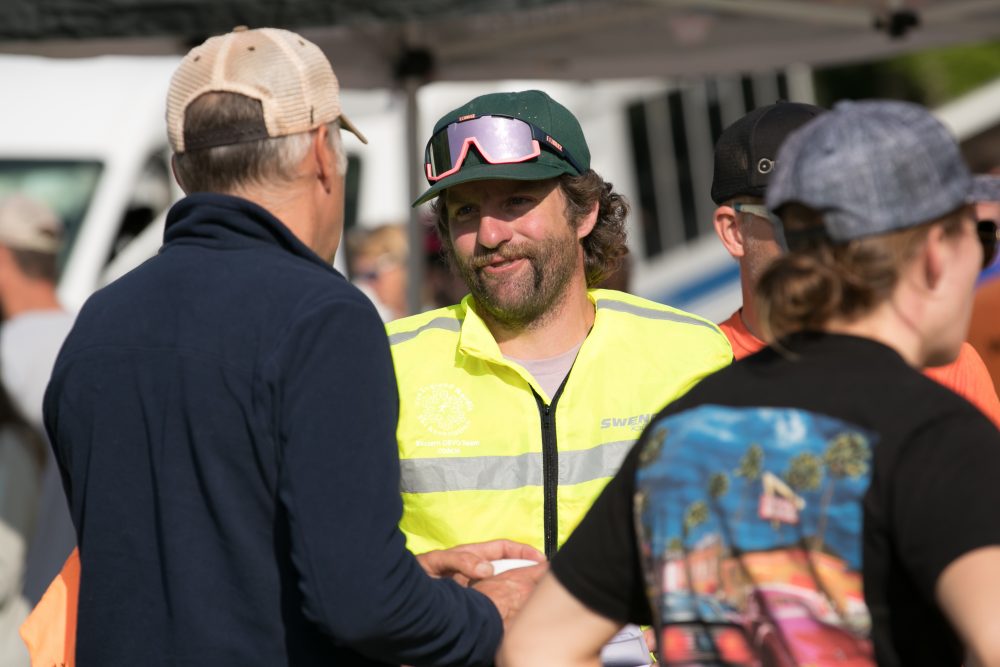 Years ago, the App Gap was the low-key culmination of a summer camp at Green Mountain Valley School (GMVS) when Beckwith coached at there. After a hiatus when the App Gap race lapsed, it returned when Beckwith became New England Nordic Ski Association’s (NENSA) competition director.

In 2017, the first year that NENSA organized the App Gap event, there were 57 finishers. That total bumped to 119 last year. This year’s App Gap featured 167 finishers.

“It all comes down to the action we have in our clubs right now,” Beckwith said. “It’s the vision we’re trying to promote.”

Beckwith credited clubs from beyond the local area buying into the event, saying that this was the first year Stratton Mountain School junior athletes had competed.

“The elite skiers love it,” Beckwith said.  “We had four of the top-10 overall ranked male and female skiers in the U.S. here this year. That’s really inspiring for the kids.”