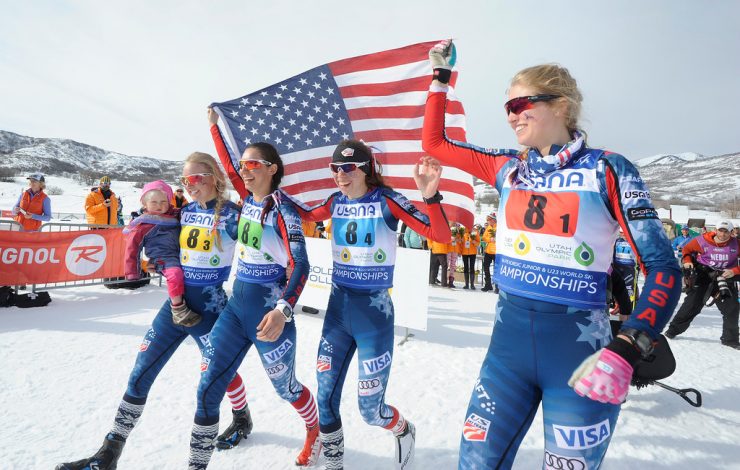 The news came trickling out of Anchorage on November 2nd. U.S. Ski Team athlete Hannah Halvorsen was hit by a car while crossing a street in downtown Anchorage.

“I was crossing a one way street, and a woman was turning into the lane, so she looked left where cars would be coming from and didn’t look right, where I was, and just turned right into the street and hit me at 25 miles an hour,” said Halvorsen. 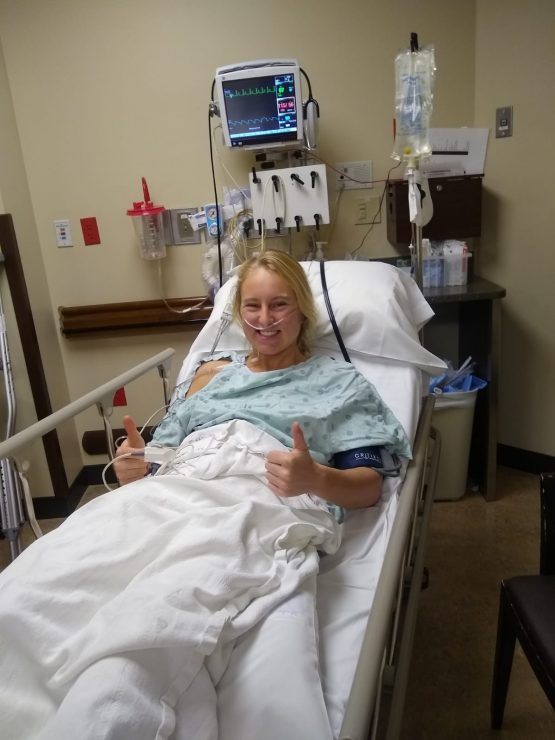 By all accounts, Halvorsen jumped onto the oncoming car’s hood. She rode on the hood for a couple of hundred yards before the bewildered driver recognized what was happening and hit the brakes, sending Halvorsen onto the pavement. She sustained severe injuries to her head and knee, among numerous secondary injuries. From a hospital stay in Anchorage, to knee surgery in Vail, Colorado, to some downtime in her hometown of Truckee, California, and now a stint in Park City, Utah where Halvorsen can tap into the recovery resources at the ski team’s Center of Excellence; the recovery has begun.

In the crude world of not really knowing a person but learning about them superficially with the crisp and delineated line items of a results sheet, Halvorsen was almost always near the top.

For the time being, let’s be blunt — that top status has been stolen.

A few years back here outside Bend, Oregon, up at Mt. Bachelor, I was parked next to the Halvorsen mini-van. The family was in town for a regional ski race. If you’ve ever seen the Halvorsen clan in tow you know this: there are many moving parts. Six kids in total ranging in age from Hannah (21) to the youngest at four.

My child, 13 at the time, jumped into the passenger seat. We then took a moment to watch some real-life beauty better appreciated by a parent, not necessarily the teen sitting next to me. Jon Halvorsen, Hannah’s dad, had opened the van’s hatchback and laid out bread in an improvised peanut butter and jelly assembly line. Yes, some of the younger kids whined. They were hungry. But the peanut butter was spread, then the jelly. And the two halves slapped together. Then the feed went down.

In between, while we rubbernecked, I mentioned this to my own child: that as simple as that looked, what he was watching was profoundly harder than any ski race. We saw a parent remain patient as he juggled four or five other personalities (I lost count) demanding his attention. And he evidently nailed the PBJs as they were devoured. The moment stuck with me because I was unsure if I could have managed.

I relayed this anecdote to Halvorsen and we shared a laugh.

“It makes me think about a lot of things, like sandwiches,” Halvorsen said. “The sandwich one is funny because I remember, I was pretty young when I started making the lunches. That was my chore in the morning. I got so dialed. I was probably in third or fourth grade. I would get all the lunch boxes lined up. And I would line up all the bread. And you just have everything like a factory or it would take too long. There was no doing one lunch at a time. I would make my dad’s too. He was a teacher.”

Grounded in quotidian chores helps prep for quotidian tasks. What Halvorsen has before her now is more akin to daily sandwich making than rocketing around ski courses in USST lycra.

She is prepared for the task of literally rebuilding body and mind. 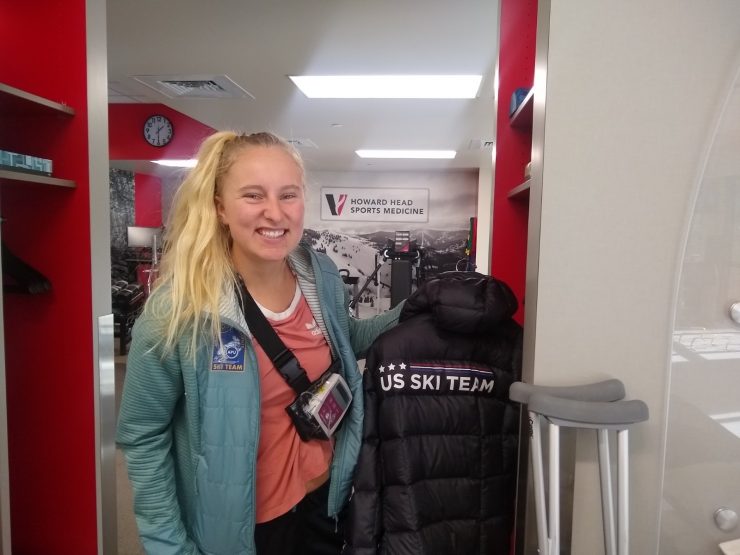 “My head injuries were more severe,” Halvorsen said as she listed off the physical damage from her accident. “I had a skull fracture that they had to stitch back together. Then I had a hematoma, which is bleeding in the brain. I had a lot of contusions, which I basically understand as bruises, basically all over my brain.”

Halvorsen explained her brain injuries were primarily to her visual processing center. Which, she said, had doctors worried she’d be blind. “I just barely got away. My eyes were very slow for a few weeks, but they’re back to normal.”

She was also severely concussed and had a loss of memory. “That’s what I would say is the biggest noticeable thing for me, is that I don’t remember the two weeks after and I don’t really remember the week before my accident. But, I definitely feel like myself, like I have the same sense of humor and I like the same things.”

Halvorsen also lost her sense of smell and taste for a month. Both have returned. When her head trauma stabilized, doctors then green-lit knee surgery to fix a torn Posterior Cruciate Ligament (PCL) and Medial Collateral Ligament (MCL). Then, post-surgery, it was time to strengthen a limited and atrophied left leg. Along with the medical issues, Halvorsen now must posit what this means. Several months out from her accident, Halvorsen has dwelled on something many elite athletes are able to forego in their early twenties, a time when the body is primed to be primed.

“I didn’t have any gratitude for being a human,” Halvorsen said. “That’s not something I had even thought about, and now I’m realizing that just being a human is no guarantee. That’s probably been the biggest thing for me. That’s the biggest thing to process. I think I spent most of my energy and time thinking of myself as a skier, and when you think about skiing you don’t really think about how you can do these simple things like drive a car and walk up a flight of stairs and taste food.”

Halvorsen’s life is simplified. Recover, strengthen, and ski. With all the time to ponder, she remains committed to excelling in the sport.

“I feel more excited and more confident that I want to ski and try to make the Olympics than I ever have because I think I have a better understanding of what really matters to me. So it actually makes me want to ski more because I realize how important that is to me now. Am I going to worry quite as much about who ski faster than me? I don’t think so. I just want to embrace it and do it to the best I can.”

Halvorsen stated she feels supported. Her parents and family, the U.S. Ski Team, coaches, and friends are her close-orbit safety net. She has also connected with Norwegian star Astrid Uhrenholdt Jacobsen. Back in 2009, Jacobsen was severely injured in a bike accident and was initially told a return to elite level skiing was implausible. She is currently ranked 4th in the Overall World Cup standings.

The financial side of recovery, for the time being, is covered by medical insurance; Halvorsen is listed on her father’s plan. Yet, the fact remains that Halvorsen’s body is part of her job. No high functioning body, no ski job. A matter of fact either-or paradigm. 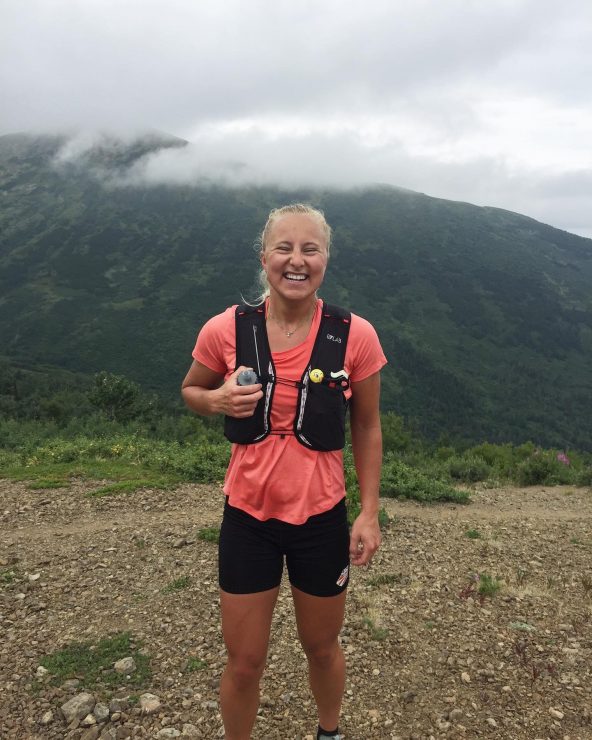 Halvorsen now calls those plans “irrelevant”. “Gone”. Not in some forlorn, pity-me way. Her plan has simply deviated to a new end-game. Get back on snow.

“At first that was very disorienting,” Halvorsen said of her extinguished plan. “But now that the knee surgery is over and I am not on hold, I am moving forward and I know what that looks like a little bit. It is a different plan, but it is still, … I am working on a plan. I feel meaningful again.”

Her December knee surgery put her, in theory, on-snow in nine months. That’s not a hard number. Rather it’s a sensible carrot her orthopedic surgeon tossed forward in time. It is an estimate with scores of strength and mobility milestones along the way.

As Halvorsen provided the estimate of nine months when I asked how long it might be until a return to skiing, I replied, “that’s not a long time.”

“I was actually thinking about that,” Halvorsen answered. “It’s about a year, basically, until I’m back — I’ll be a little out of shape, but back to normal. If I was 20, a year would be five percent of my life. That’s a chunk. A year is big for someone my age.”

Indeed, a year is a long time. And during a year when she likely would have fulfilled most if not all of the incremental steps she had laid out in her fastidious skiing plan, it becomes longer still. In her new state of mind, though, she understands the grim alternate post-accident reality.

So the ski season goes on. And Halvorsen wants to be informed by her U.S. teammates about their accomplishments and struggles. One can imagine her teammates, too, have had a reality check moment. They are perhaps nervous to dwell on a missed sprint heat or a performance outside the points when conversing with Halvorsen. Ski results don’t matter much. But Halvorsen wants her Ski Team peers to be honest.

“[My teammates] do actually preface our conversations about races with ‘this isn’t serious right now, but I am just not racing where I want to be’. I am just like ‘no, don’t hide or protect me from everything that is going on’. I want to be able to hear about it.”

The words, ‘not racing where I want to be,’ have become a trope in elite level skiing. As Halvorsen filtered that statement for me during our conversation, she added some depth to those words.

“I have felt that disappointment in races every year,” said Halvorsen. “I know that just because you can ski and you didn’t get hit by a car doesn’t mean you cannot feel sadness. Just like we are not in a war zone in Syria, it doesn’t mean we don’t cry sometimes or feel scared. I think I now have an understanding that humans have a whole range of emotions and no matter where we are in life, we can hit that range.”

Halvorsen has an ongoing fundraiser to help offset any uncovered medical cost and her aspirations for the 2022 Olympics.

You can donate with a Paypal Link

You can donate with Venmo

Or, A Direct Mail Contribution to:

You can also private message Halvorsen on Instagram to make arrangements.