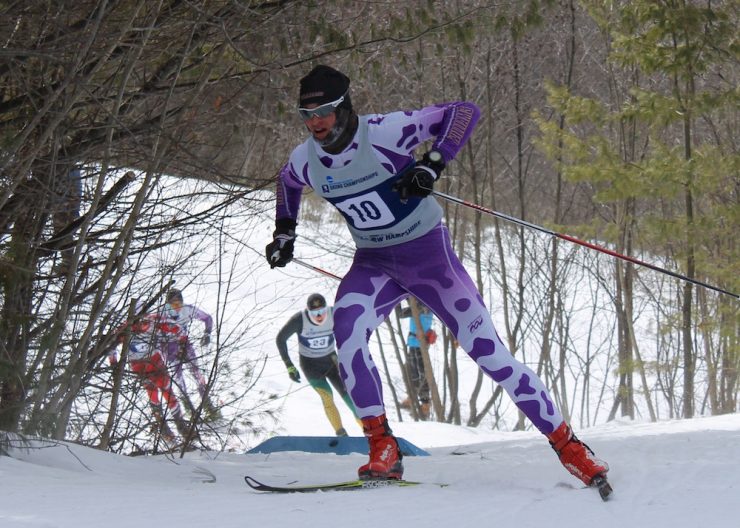 Jordan Fields of Williams chasing the leaders on Lap 2 at the 2017 NCAA DI skiing championships.

For those growing up in the East and worshiping high peaks, one stretch of ridge line is the most storied: the Presidential Range in New Hampshire’s White Mountains. On September 6th, former Williams College skier Jordan Fields established a new fastest known time (FKT) of the Presidential Traverse in 3:42:38 hours.

Here’s the stunner: the previous FKT established in 2018 was 4:04:30 by Lee Berube. On the FKT website documenting all things FKT, the Presidential Traverse has seen gradual time improvements over the years. But Fields’ effort, as it moves into the sub-four hour realm by a large margin, is a standout.

“I was very surprised with the time,” said Fields. “My goal was to be sub-four hours. If I made it sub-four, that would be a huge success. I expected to be going down Crawford Path which is the finish, just fighting for a small victory.”

The run begins outside Gorham, New Hampshire at 1,300 feet in elevation and finishes near Crawford Notch, 18.7 miles later. In between, the route hits the summits of Mt. Madison, Mt. Adams, Mt Jefferson, Mt. Clay, Mt. Washington (the route’s high point), Mt. Eisenhower, and Mt. Pierce. That all amounts to an elevation gain of 8,319 feet.

Fields first heard of the traverse from his club ski coach, Nick Mahood, when Fields skied out of Woodstock, Vermont. 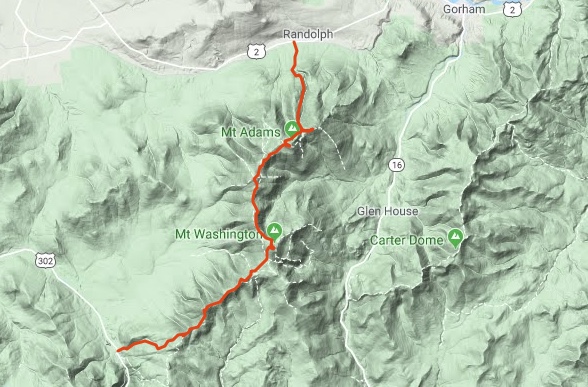 “Nick had done in it college with his UNH ski friends,” said Fields. “He told me the first time they did it it took them 11 hours and they didn’t bring a headlamp. They came down the final section using matches to light up the trails so they could see. From that point, it took on this legendary status.”

“It took us about 11 hours that day too,” recalled Fields. “It was funny because that first day we were like ‘maybe we could set the record on this if we get going’. We ran up the first mountain, Mt. Madison, pretty fast and then proceeded to bonk. And we were totally unprepared — one peanut butter and jelly or something. It was a long day.”

Now enrolled as a graduate student in Dartmouth’s geology program and helping coach the cross-country ski team, Fields claimed he needed a project to remain motivated. With guidance from the Uphill Athlete, Fields based his training at the Dartmouth Skiway and focused on weekly vertical gain; 10,000 to 20,000 feet per week on average.

Fields said his motivation to challenge the FKT came from a friend, a former 2012 Olympic sailor, who was lost at sea.

“I told him that I wanted to set this record back then,” said Fields. “He was the first person that believed I could do it.“Unfortunately, he passed away in 2015. He was the person who encouraged me to do it in the first place. This was it, I was going to dedicate to him. It gave me a reason to feel motivated.”

The training, course previews, and motivation carried Fields to a one minute advantage over the previous FKT split atop Mt. Madison, the first of the many peaks along the traverse. Fields knew from his two prior recons earlier in the summer descending was his ace-card. His plan was to rely on that skill to maintain and eventually build his lead. Atop Mt. Washington, a bit beyond 10 miles in, he had a six minute advantage.

“I wasn’t feeling good at that point,” claimed Fields. “The lowest moment for me was climbing Washington. I had a six minute lead at Mt. Clay, the minor peak between Jefferson and Washington, but between Clay and Washington I put on no additional time. I thought I might be slowing down there. Luckily, I had prepared for this.”

That prep came in the form a 100 ml of flat Coke enhanced with crushed caffeine pills.

“I took that and put in my headphones on Washington,” Fields explained. “It took the previous record holder exactly 1:30 hours to go from Washington to the finish. It took me an hour and 14 minutes. I put 16 minutes into him over that period of time. It was all a big unknown. What was important to me, because I was dedicating this to my friend, was that even if I was behind on the time, I was going to keep going as hard as I possibly could. That was the mentality I had.”

The conversation with Fields evolved into what might be his future potential projects. Fields was leading a geology trip for Dartmouth at the time of our call. He was settled for a few days in the shadow of Jackson Hole, Wyoming’s Tetons. If you are prone to dreaming of big link-ups, mountain runs with infusions of technical climbing, the Tetons remain an open book. Fields said he wants to move in the direction of technical alpine climbing when it comes to adventuring.

Surrounded by perhaps the most iconic peaks in the U.S., Fields noted that some bold traverses in the range had now captured his attention.