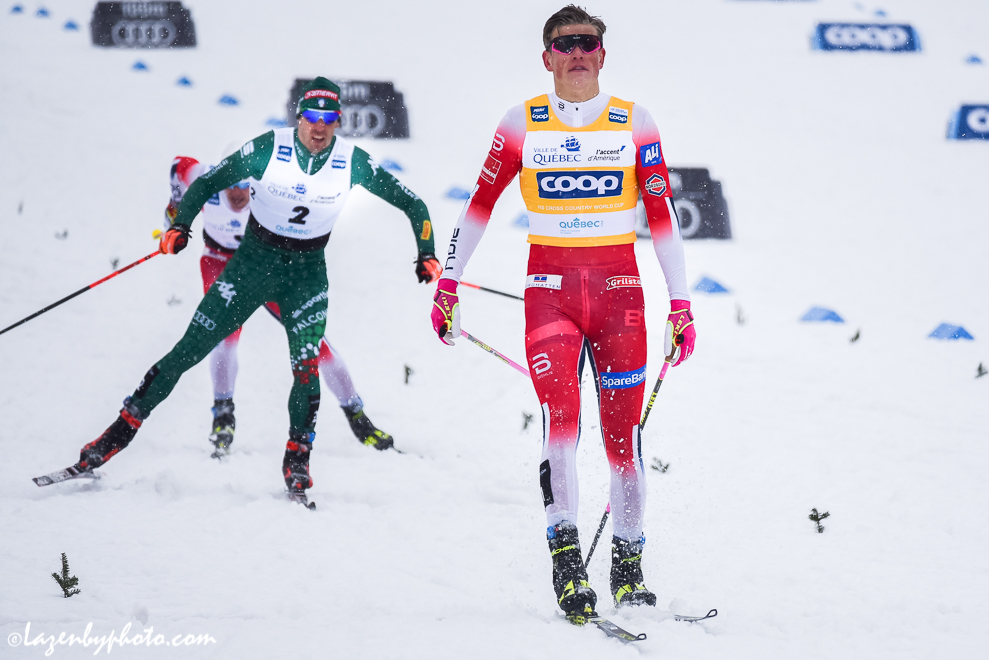 How to play the Johannes Høsflot Klæbo sprint game? It has got to go through every sprinter’s mind. As the day’s fastest qualifier, Klæbo set the tone in 3:07.61.

Prior to Friday’s 1.6-kilometer freestyle sprint in Québec, the young Norwegian had started nine World Cup sprints this season. He had won seven of them and placed second in another. And he had already locked up another sprint cup crystal globe becoming the first to win the prize in three successive seasons. With the globe pressure off, Klæbo could play his hand. Which brings us back to how he’d ski on a long sprint course with soft conditions and how his competitors would counter. 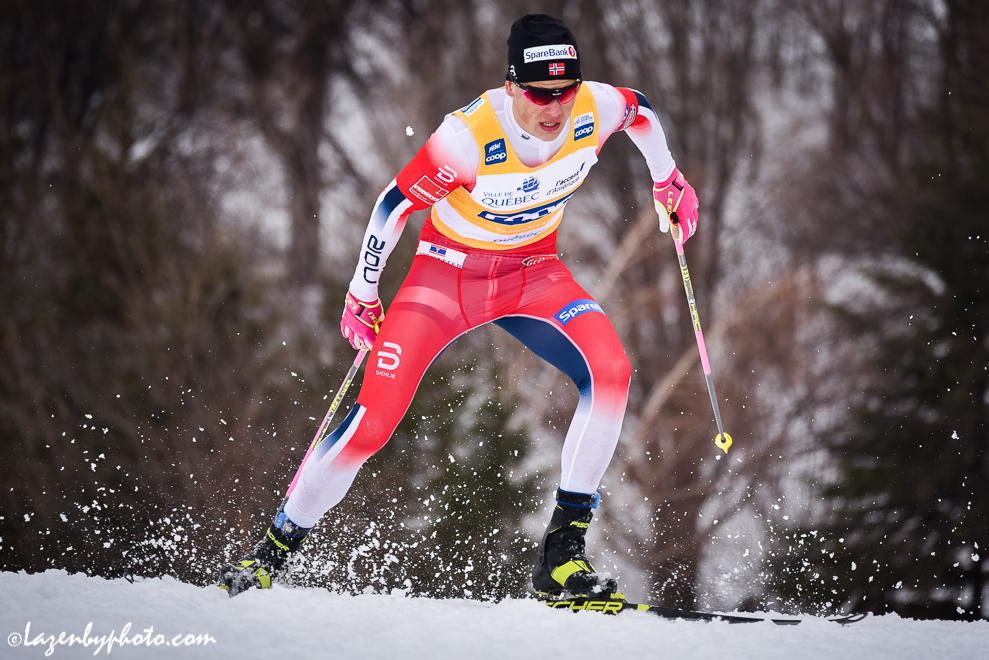 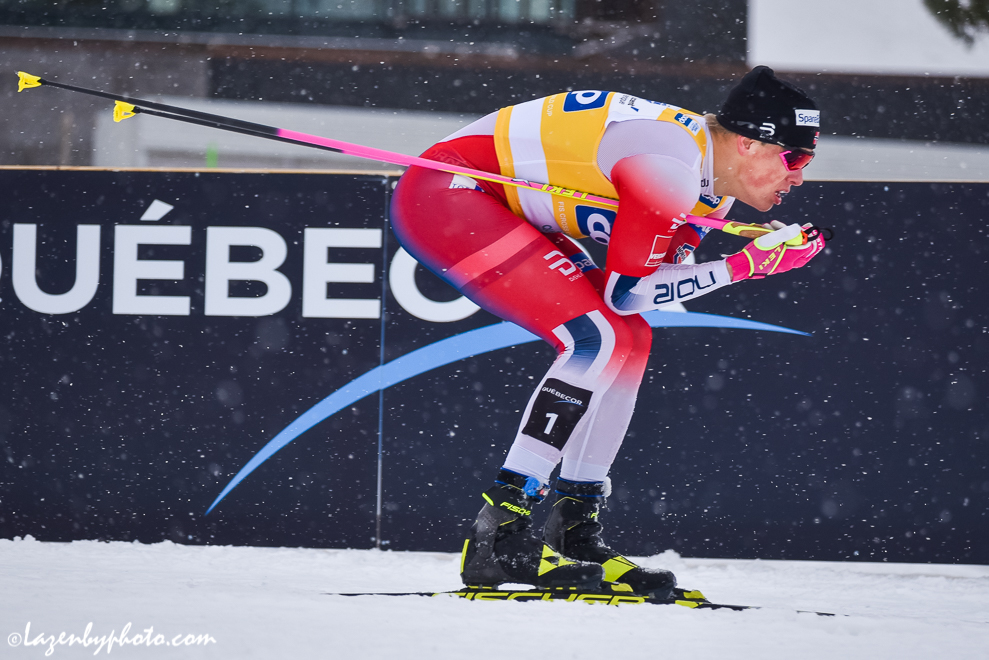 Russia’s Alexander Bolshunov, second in the World Cup overall standings, went head to head twice against Klæbo on Friday. In the quarterfinals, Bolshunov went full-throttle from the start. He looked like he could pull off the start-to-finish-pull for much of the first Klæbo encounter. Yet had did fade to place third in the heat which his nemesis won.

In the final with Klæbo, Bolshunov had a timid start. He hung in the back. This time playing a different strategy. Around 1:20 into the final, Bolshunov did accelerate. He gained a few spots to move into fourth.

Another skier in the final knowing it was Klæbo’s show, Italy’s Federico Pellegrino, made an up-tempo counter punch on a steep climb at the 1:55 mark. Hop-skating on the outside, Pellegrino pushed. Sindre Bjørnestad Skar of Norway led over the top and kept the Pellegrino move in check. With over a minute of racing to go, Klæbo kept in control. Skar took the lead, Klæbo followed, with the Italian and Bolshunov in third and fourth. 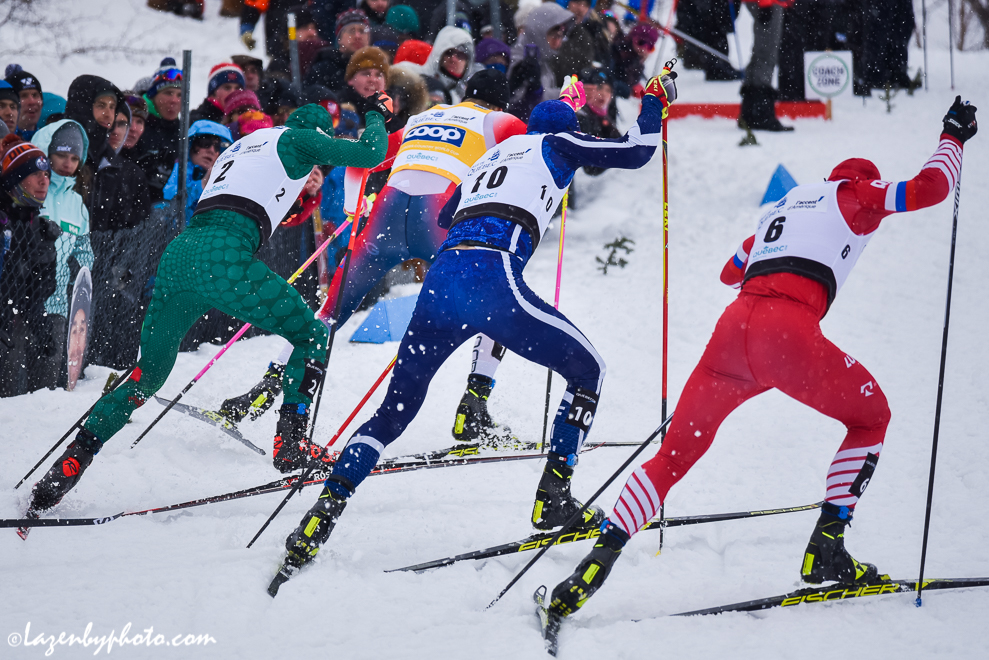 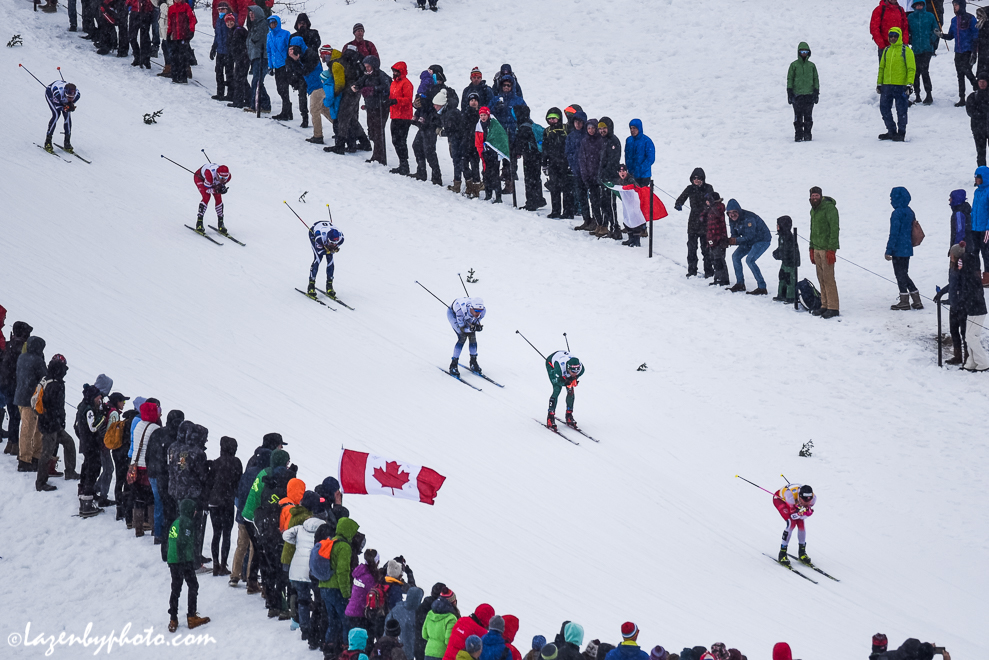 “Quite difficult conditions today, it was a really fun race,” Klæbo told FIS after the race. “I think the quarterfinal was the toughest one, it was really hard. It seems like Bolshunov is in good shape so it should be an interesting weekend.”

Coming into Friday’s races, Klæbo held a 14 point lead over Bolshunov for the World Cup overall. With the win, Klæbo earned 50 points, Bolshunov 40th for fourth. With two distances races remaining, it does get interesting. Klæbo leads with 1443 points to Bolshunov’s 1419.

In the press conference, Pellegrino made light of his second place finish as he deferred to a skier he has gained much respect for.

“This adds to the long list of second place behind Johannes,” Pellegrino said according to a translator. “It will be a long list. I will keep training very hard to be on top. I still have the legs to keep up so I will keep on trying. I have never made a podium in Québec before so I think I can do it again next year.

I heard a lot of noise, ‘Pellegrino, Pellegrino’. In Europe, it’s hard to get people to come out and watch in bad weather. There was a lot of emotion in Alex [Harvey], but next year I hope they will still come to watch even without Alex. The courses were in good shape in spite of the conditions and the crowd here is amazing!” 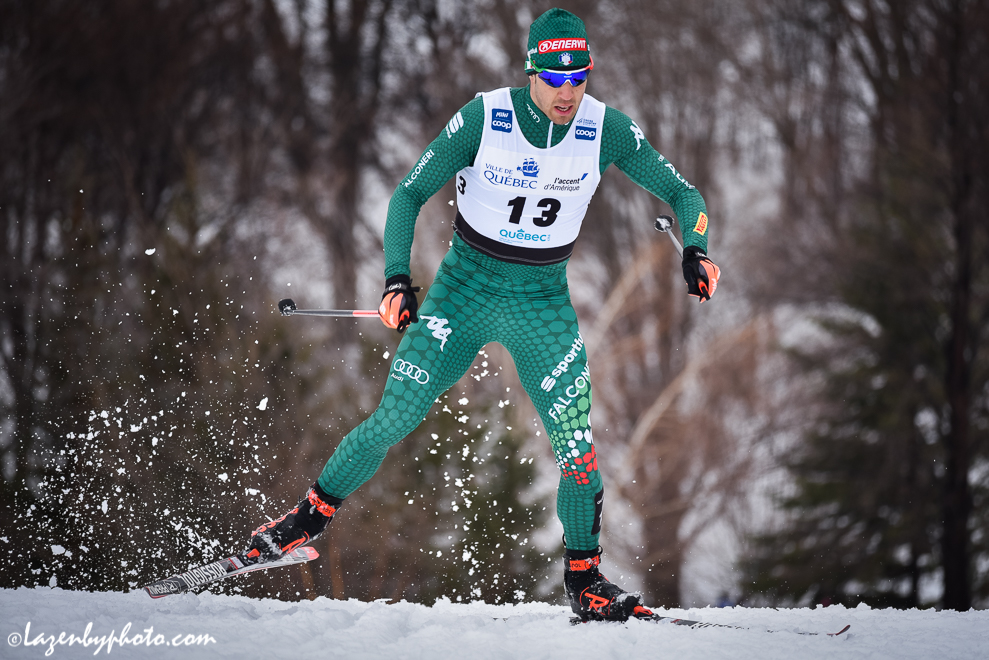 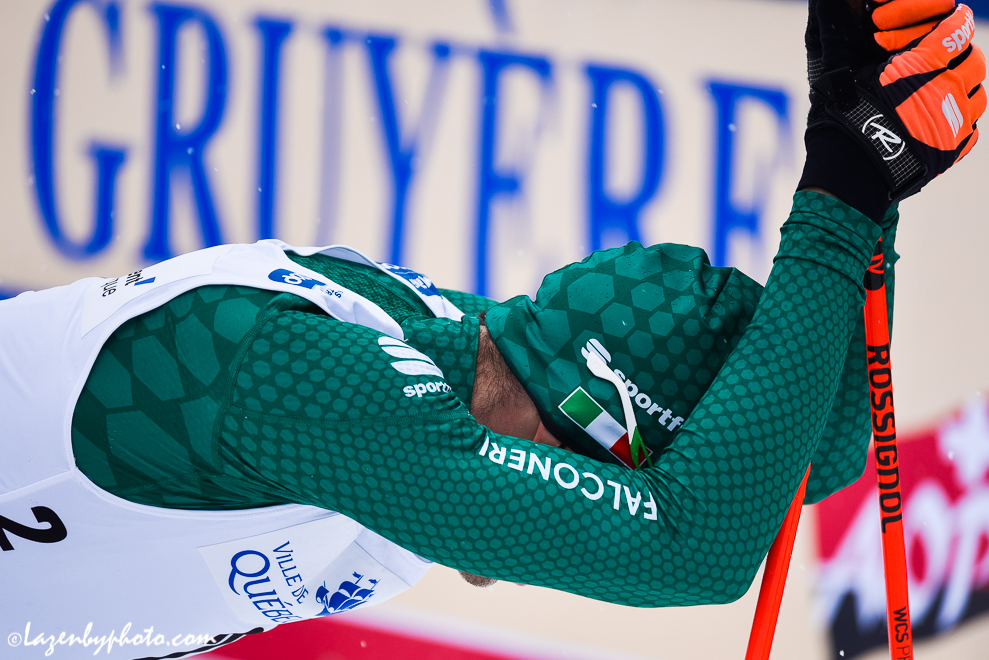 World Cup skiers understand Pellegrino’s sentiments. They too are here to soak in the Québec City atmosphere as it is an extension of Alex Harvey’s love for the sport and Québec’s love for him.  Harvey qualified in 23rd on Friday and finished 10th overall.

“It was really good,” Harvey said in the mixed zone after the race. “I think in a stage event like this the goal for every sprint day is to make the semis, that’s where the sweet spot is for bonus seconds, so that was really good. … The semi-final was the fastest heat out of the two, it was just full gas the whole way with Bolshunov. So the other guys were just faster, but I haven’t qualified on the World Cup since December 2018. So I’m not the best sprinter anymore. So for me to make the semis it was great.” 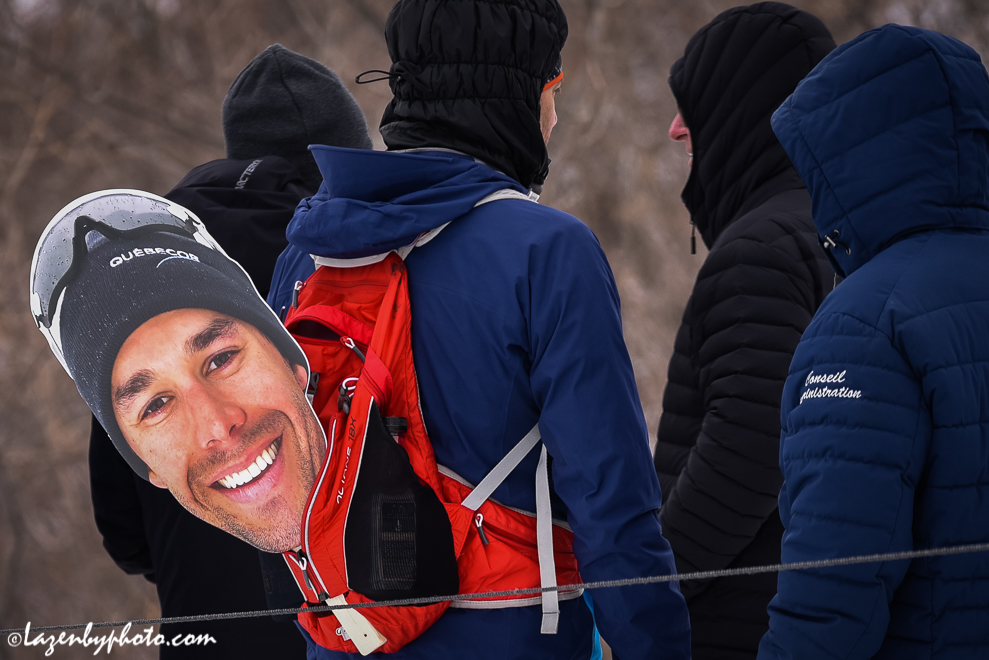 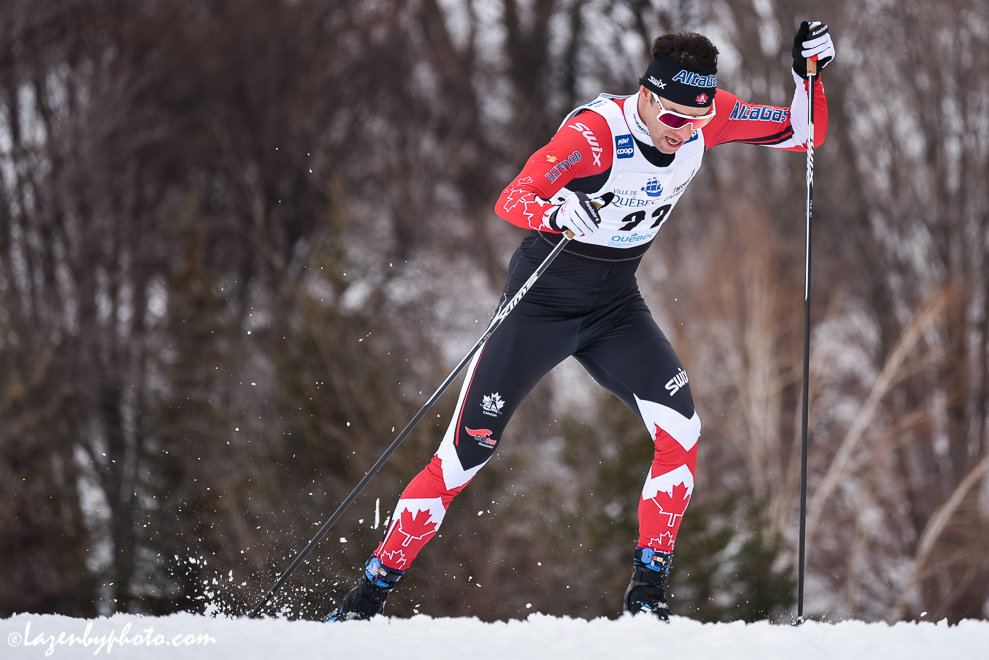 Simi Hamilton was the top American on the day in 13th. After qualifying in 11th, Hamilton bowed out after placing third in his quarterfinal, roughly .5 seconds behind Harvey who skied to second.

“It’s just tough out there,” Hamilton said of the soft snow. “You know I think I’ve gotten better at skiing in those kinds of conditions, but still not totally there and it was just really soft and slow, made it extra hard with the headwind in places and it’s not fun skiing, but that’s ski racing. It’s not gonna be super enjoyable all the time. I think probably everyone feels like they can’t really ski out there today because it’s so hard.”

U.S. skier Logan Hanneman made the top-30 cut after qualifying in 29th. Skiing near the back of his heat in the quarters, Hanneman lost his balance around a dicey downhill corner.

“My ski just got grabbed by some of the snow,” Hanneman said of his tumble. “It’s pretty wet and deep on that corner especially and a snake jumped up and bit me and down I went. That’s how it goes I guess, but it’s tricky conditions out there and even on the downhill leading into it was grabbing the skis and going everywhere. You have to be light on your feet, which is not my forte.” 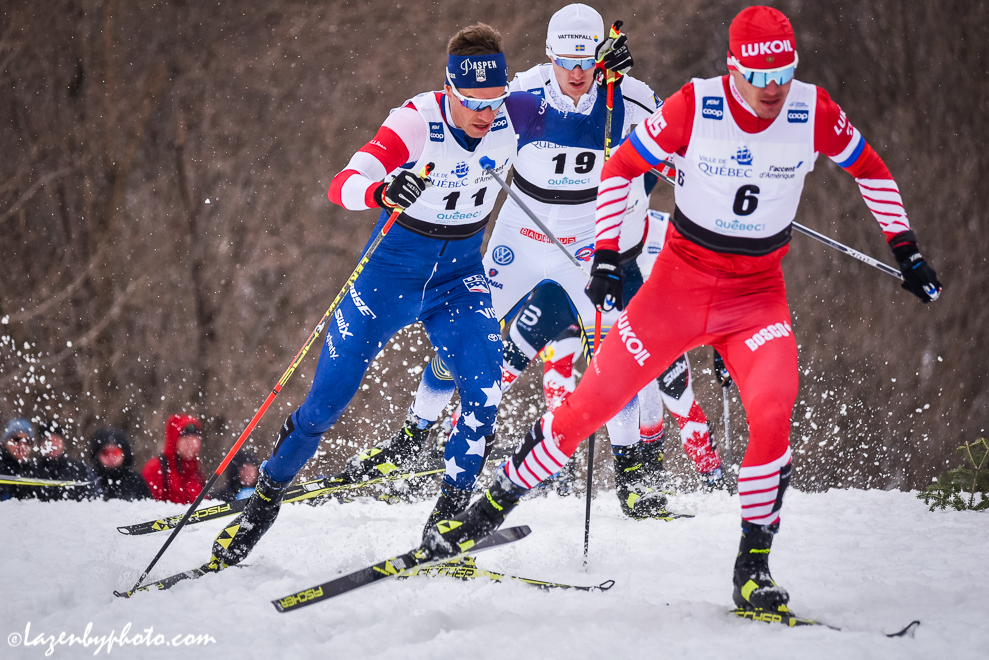 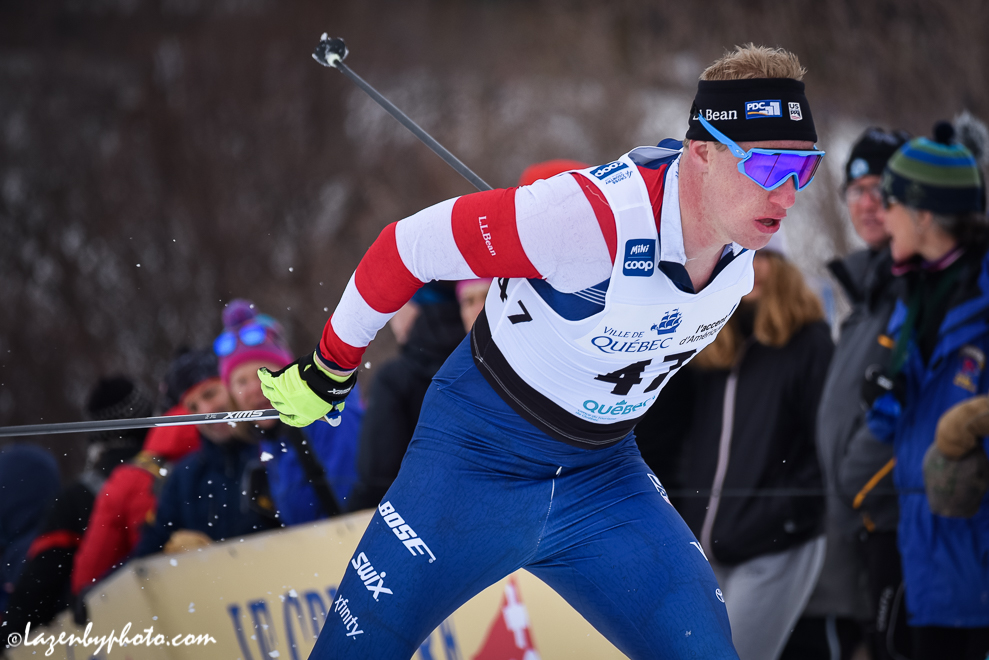 Hanneman has seized several opportunities this season on the World Cup. He first qualified for the World Cup heats this past February in Cogne, Italy.

“Just this season, I’ve only got a few World Cups in me and I qualified 15th in Cogne,” Hanneman said. “And then I qualified at World Champs and here and so I’m really happy to be making it into the heats now. I was really excited today to try to be a little more competitive in the heats because in the heats I’ve done before I’ve just been in the back. I don’t know when and where to pass because it’s so tight. So I was excited I felt pretty good on that uphill and I was excited for this uphill for sure and it didn’t happen so that’s okay.”

Racing continues tomorrow with a 15 k classic mass start race for the men and a 10 k for the women.