With one stage remaining in the 2019-2020 Tour de Ski (TdS), and with standings somewhat unsettled before what some consider to be a slam dunk final stage for the current overall leader Therese Johaug from Norway, time bonuses were what mattered in Val di Fiemme, Italy on Saturday. Podium pride was at stake, but generous time bonuses were the carrot for many in the 1.27-kilometer classic sprint.

First through 30th place in the TdS sprints receive a time bonus. Sixty seconds for first, 54 seconds for second, and so on. Time matters.

After Stage 5, Johaug led the overall by 19 seconds over Ingvild Flugstad Østberg (NOR) in second, 32 seconds over Russia’s Natalia Nepryaeva, and for good measure, 33 seconds ahead of Astrid Uhrenholdt Jacobsen (NOR) in fourth. 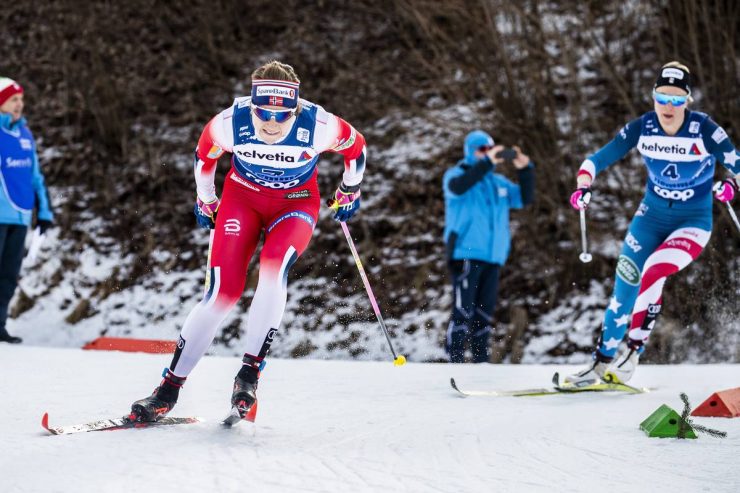 The thirty-two-year-old Jacobsen comes off a mildly surprising win in Stage 5’s 10 k mass start classic race. Of late, her classic technique looks dialed and her ski speed has been an asset. For the longtime National Team member, the top podium spot has been a fleeting prize. Over her storied career, she has won five World Cups. We bring her up because she animated today’s classic sprint and positioned herself nicely for a TdS overall podium spot. More on that in a bit.

First a reminder, this is well into the TdS. Many of the World Cup’s top sprinters dropped from the Tour a stage or two ago. For the U.S., Sophie Caldwell is missing. Some top sprinting Swedes are not at the Tour. And Maiken Caspersen Falla of Norway took a raincheck. With forty-four skiers starting the qualifier, it was a good bet that many of the names we associate with distance skiing would progress.

Jessie Diggins of the U.S. qualified in first on the 1.27 k classic sprint course in 3:04.26. Yes, all the top contender names in this TdS advanced to the heats. 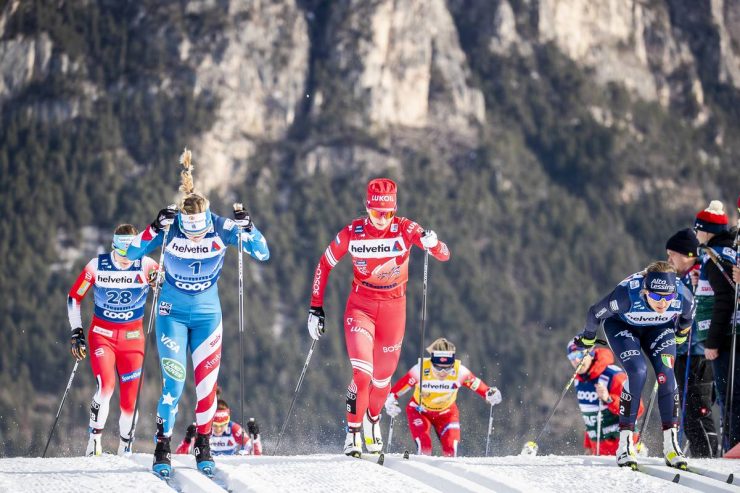 In the first heat, Diggins looked smooth and powerful as she placed first. But slotting into fourth, in by far the fastest quarter-final was Johaug. She would advance to the semis, minimizing the potential damage of time bonus gains by her rivals for the overall.

In the second heat, it was Jacobsen who commanded the win with timely positioning and rocket skis. Sadie Maubet Bjornsen was second. Brennan placed fourth and did not advance.

After cataloging the quarters, all the key players remained. An upstart Anamarija Lampic from Slovenia, Nepryeava, Weng, and Østberg, Johaug, Diggins and Maubet Bjornsen. The only potential overall Tour contender not to advance and capitalize on more bonus time was Sweden’s, Ebba Andersson. Prior to today’s sprint, she was fifth overall, only 38 seconds out.

Andersson ended her day ranked 28th in the sprint. 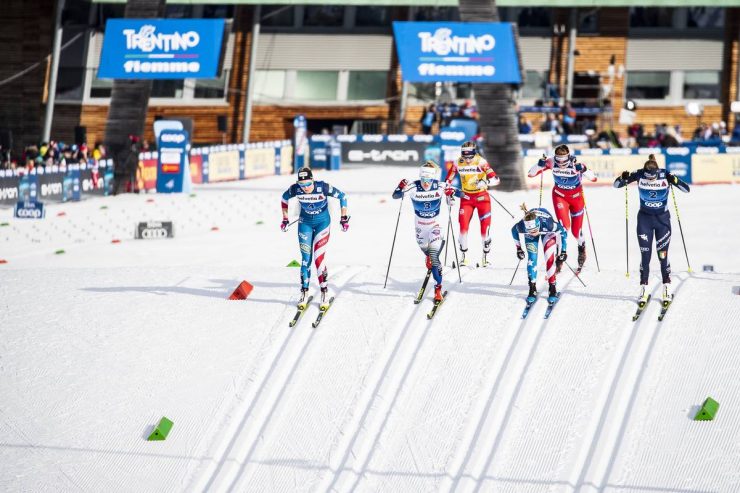 In the first semi, Jacobsen, Maubet Bjornsen, and Diggins went 1-2-3 to advance. Diggins moved on to the final as a lucky loser. Johaug bowed out in sixth. But her mission of time bonus mitigation was accomplished. Johaug ended her day ranked 11th.

Lampic, in the second semi, showed she too is a mint sprinter. She won her first career World Cup on Stage 2 of this TdS, a skate sprint, in a deeper field. Today, advancing to the finals after winning her semi, Lampic would add another exclamation point.

Out of the start, Nepryaeva fell hard in the finals while changing lanes. She placed sixth (+15.30) after realizing that burning energy to catch back on was futile. The five remaining in front kept it tight. Up the first climb, the skiers slotted into four lanes across with Jacobsen eventually taking charge.

The course finishes with a long downhill into the final straight. Here, good skis and a transition into a power double pole played to Lampic’s favor. With Diggins, Maubet Bjornsen, Jacobsen, and Lampic gliding into the straightaway, Lampic was able to pull ahead for her second career World Cup win in 3:03.03. Diggins had a clear lane as did Jacobsen. Maubet Bjornsen, however, with a strong double pole, was stymied by Jacobsen blocking her in front. Maubet Bjornsen began pushing onto Jacbosen’s tails. The formidable U.S. skier switched tracks before she crossed the finish losing a smidge of momentum. 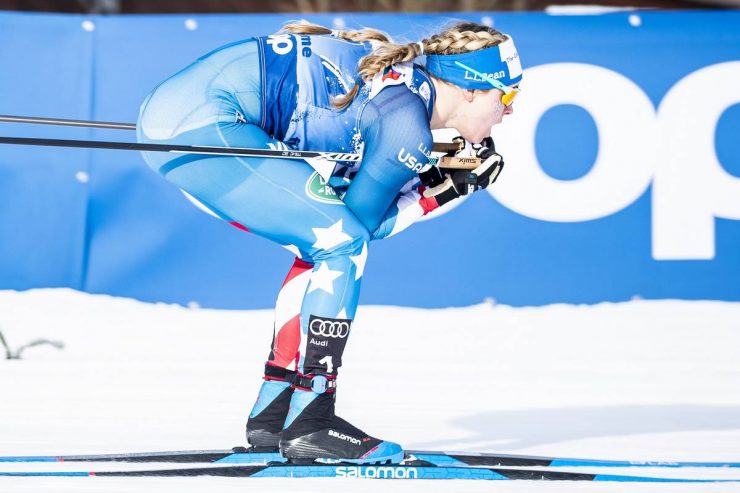 A streamlined Diggins during Stage 6 of the Tour de Ski. (Photo: NordicFocus)

“We haven’t seen a classic sprint here since 2013 World Champs, so tactically we were trying out a few new things and finding our strengths out there!” emailed Diggins. “I had good energy today and was just trying to push the pace at the start, but in the final, I was trying to use the slingshot a little bit more off of the downhill. I was also wary of getting boxed in on the tight corners because it was so important to be able to push hard over the top of the hill into the downhill.

“Huge thanks to the wax team for working so hard, and it was super fun to ski in the finals with Sadie! We’ve kept such a positive energy on this team the entire tour, through the good days and the hard days, and that has really paid off.”

Looking forward to finishing this tour like I always do – by going out there and giving it absolutely everything I have, so I can be proud of the effort I gave! 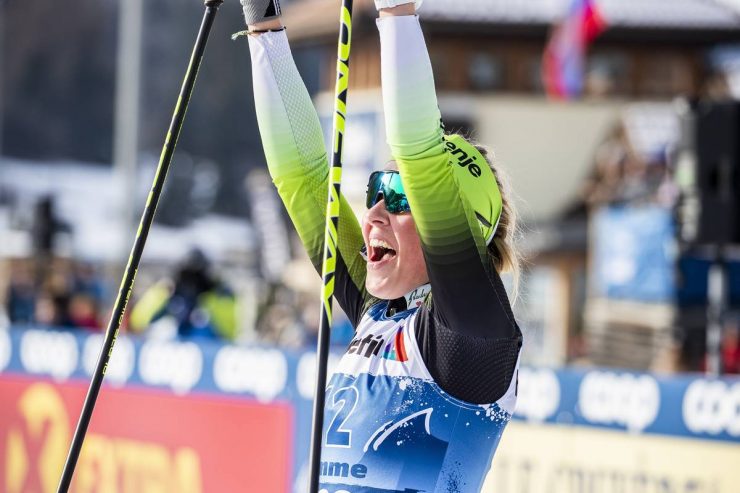 “Hard to believe we can find sprinting muscles after so many days of racing, but somehow I felt amazing today!,” Maubet Bjornsen emailed. “Through my quarters and semis, I managed to place myself in a safe place, trying to conserve energy for the final, and feeling in total control. As the finals went off, I put myself in what felt like the ‘right position’. Unfortunately, I wasn’t in the right place at the right time on the final stretch, getting blocked up and just missing the podium by half a second.

“I can’t help but feel a bit frustrated, because I believe I could have won today if I could ski it again, but how can you be upset with a 4th place? I’ll have to channel all that frustration into the final day tomorrow, up the big alpine slope.” 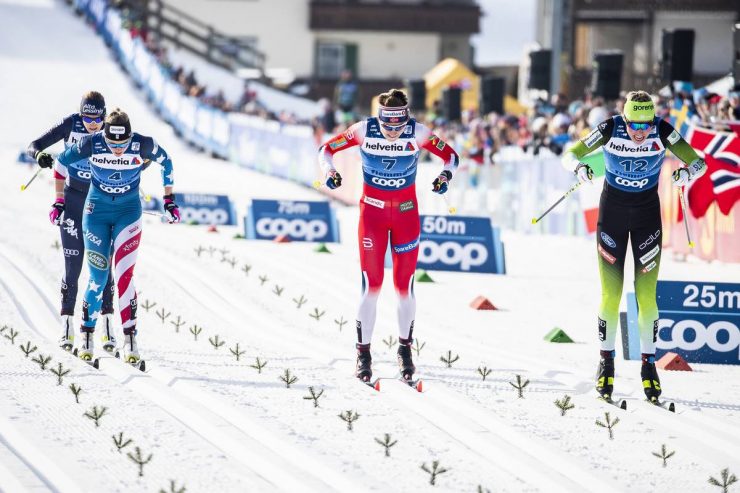 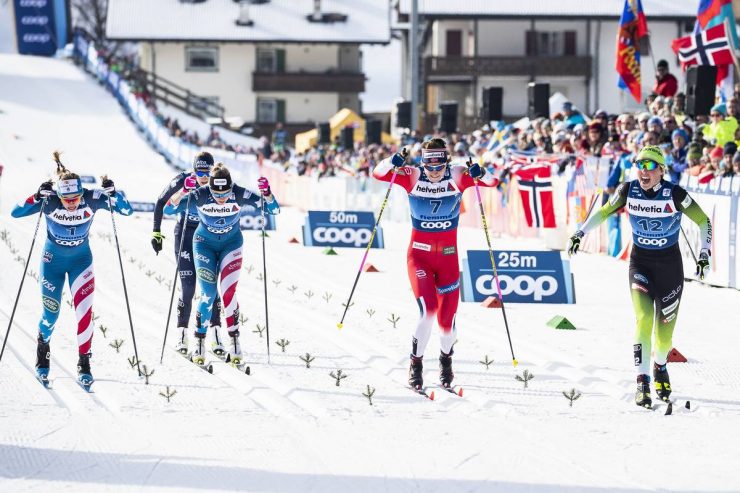 “While this tour has had plenty of ups and downs, I continue to feel strong and confident on my skis. Every new day is a new chance, which is so fun! That’s why I just love this crazy 7 races in 9 days. Getting yourself across that line on top of Cermise is an unbelievable achievement!”

The Shakeout for the Overall 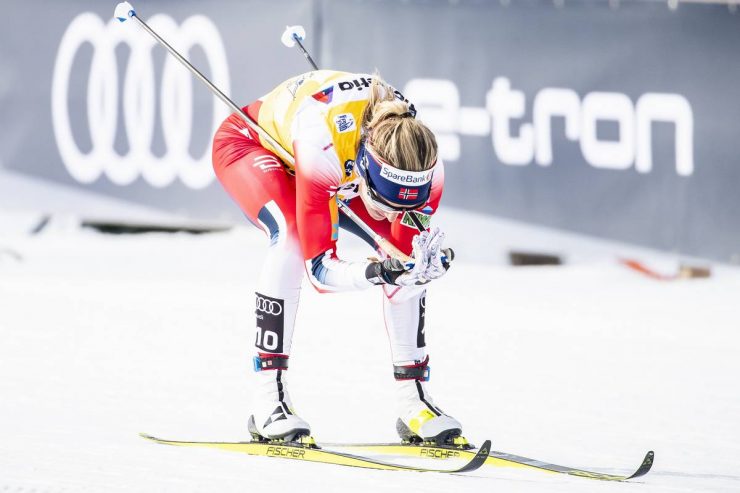 Therese Johaug (NOR) kept it close today as she advanced to the semis in the Stage 6 classic sprint of the Tour de Ski. Johaug still leads the overall standings. (Photo: NordicFocus)

With her 11th place in the sprint, Johaug earned 24 bonus seconds, which in reality served to keep those potential overall threats, if any really exist, a few seconds back. That brings us to Jacobsen. After starting the day fourth overall, 33 seconds behind, her second place in the sprint netted her a 54-second time bonus. That bumped her to second overall, only three seconds behind Johaug. Nepryaeva is currently third overall, with 14 seconds to make up. Østberg fell to fourth — she placed 12th in the sprint — with a long 23 seconds to gain on the Alpe Cermis.

Post-Stage 6, Maubet Bjornsen improves to eighth overall (+1:58) from ninth after Stage 5, and Diggins jumped from 15th overall to 11th (+2:53) after Saturday’s sprint. 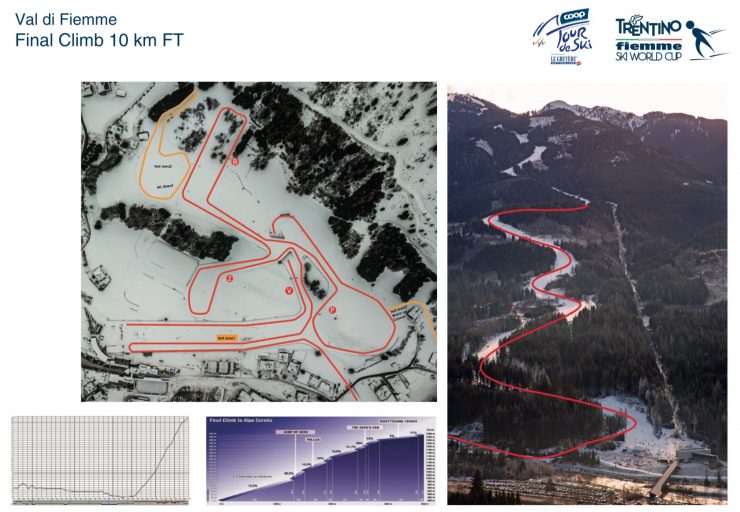 Tomorrow’s final stage, the infamous Cermis climb brings a new format this year. Historically, the Tour’s premier stage runs as a pursuit. With tomorrow’s mass start, every athlete heads out together. It will be on those trailing Johaug to somehow find a weakness and literally pull ahead.

If you’ve been listening to Devon Kershaw, no way, it will not happen — Johaug will not lose time on the Cermis.

(An athlete’s qualifying time from Stage 6 is used to determine an athlete’s time in the overall standings. Bonus time is subtracted from the overall time.) 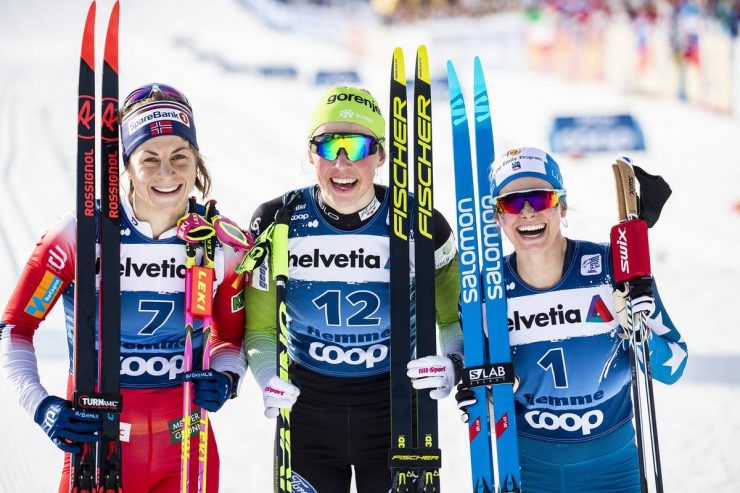