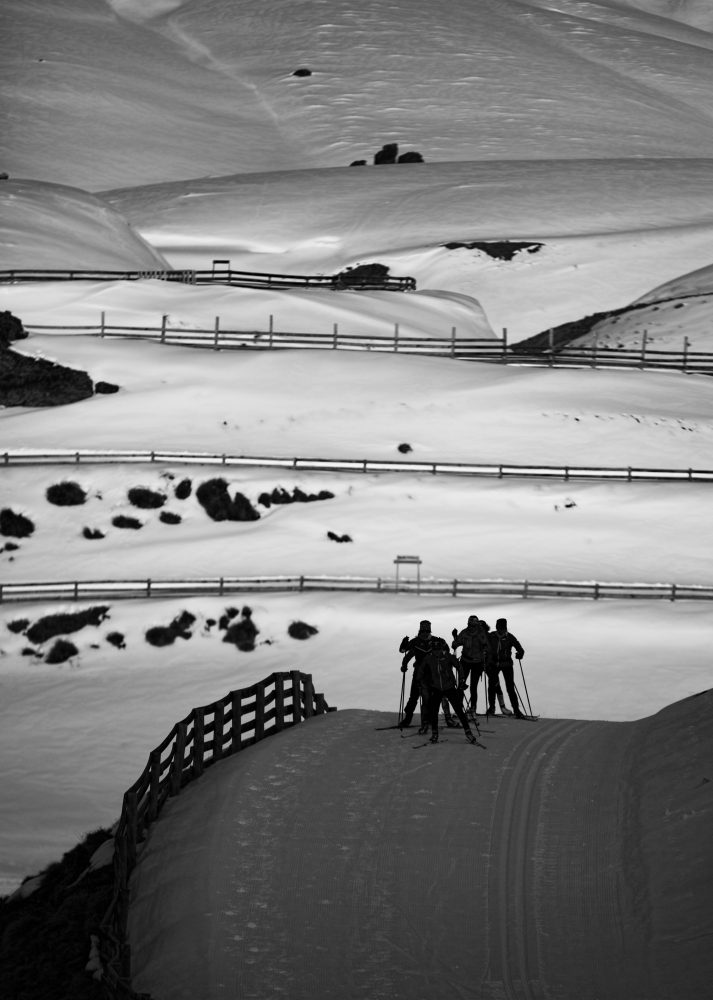 What is cool anyway? In other words, cool is not a one-size-fits-all proposition. Furthermore, one person responsible for a sport’s coolness? Talk about a burden.

On October 12, in Portland, Oregon the 69th Warren Miller film premiered. And with it, the film crew and editors made their visual case for sustaining cross-country skiing’s coolness.

For six days this September, a Warren Miller production crew shadowed the USST during their on-snow camp at New Zealand’s Snow Farm. The images they captured do not disappoint. Drone shots of synchronized striding on perfect switchbacking corduroy are drool-worthy. There’s the obligatory mix of thumping tunes and up-tempo ski clips that are hallmark Warren Miller. The fellowship of skinny skis and lycra get the creative treatment they deserve.

Behind the scenes, the New Zealand shoot wasn’t a certainty.

“We spent considerable time and a lot of debate about whether or not we’d do this,” the film’s producer Josh Haskins emailed. “It was entirely too late in the season to add a shoot, our budget was tapped, but we appreciated the unique angle and felt this was the year to tell it, while the Olympic story was still fresh.” 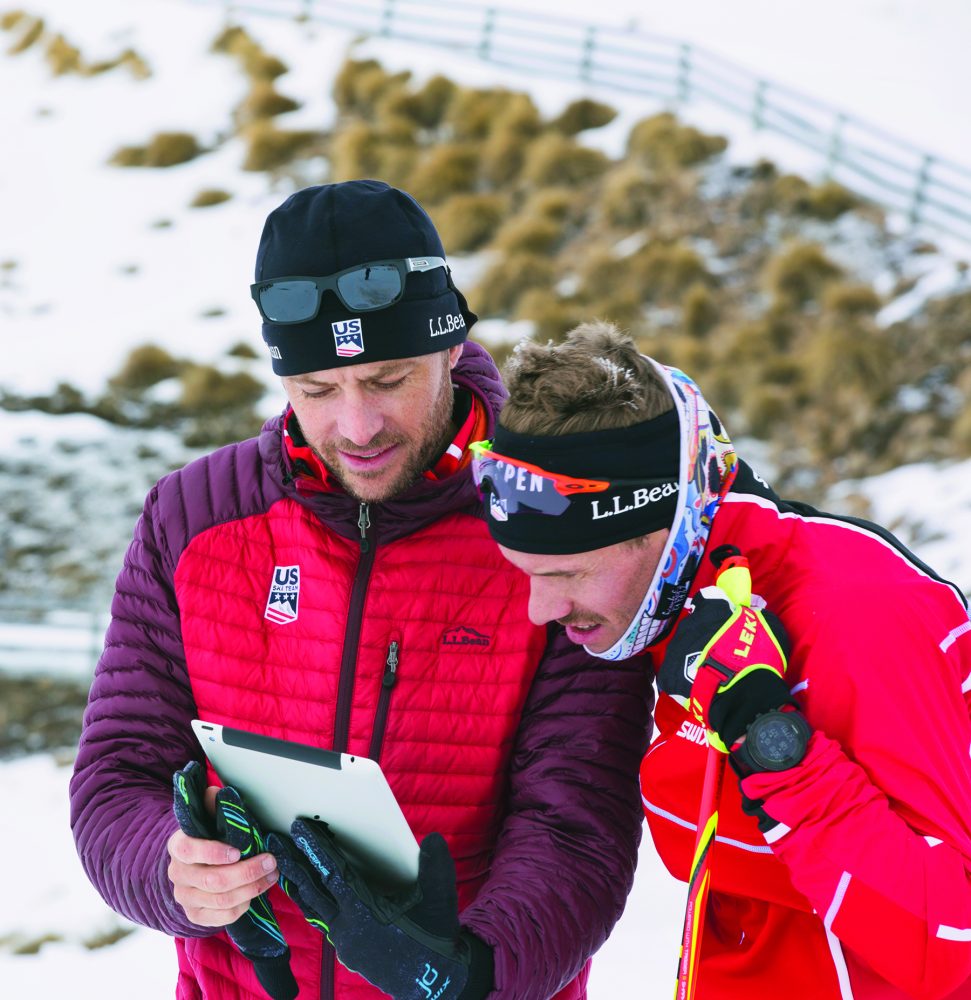 Despite the obvious exposure the film’s segment could provide nordic sport, according to U.S. women’s coach Matt Whitcomb, the coaching staff was hesitant.

“We heard mumblings about it for a couple of years but nothing really came to fruition,” Whitcomb explained during a phone call. “We as coaches said we are not sure that we want to do this. What if we all end up sick because we are skiing back and forth trying to get a good shot with Warren’s crew? Then we are going to have spent a lot of money for nothing for this camp.”

At the Snow Farm, despite the potential for distraction, the ski team stuck to its rigid training schedule. The New Zealand camp remained focused on quality training — maximizing the investment in chasing the Southern Hemisphere’s winter.

“So not spending too much time talking to a coach, continuing to move and just having a lot of well-orchestrated sessions,” Whitcomb said of the team’s on-snow priorities. “And when you have a film shoot happening during that, you can see the chance for things to run off the rails. And so we played a little bit hard to get and those guys were great they stayed at it. I don’t know if we were really appreciating how large Warren Miller is and what a professional crew they have. Because it was almost easier than when you don’t have the film crew out there. They were just so good.”

Whitcomb noted any potential disruptions were mitigated by good communication. Coaches would explain the next day’s training beforehand, the producer, in turn, explained how they could optimize their cinematography. For example, an 8-kilometer loop with fewer opportunities to film athletes would become a 3 k circuit.

“If it were 3 k long, the skiers would come by two and half times as frequently,” Whitcomb said. “And then they would have a better shot at getting the footage they needed.”

The backroom transactional nature of the USST’s participation related to business opportunities. Both the U.S. Cross Country team and Boulder, Colorado-based Warren Miller Entertainment have sponsorship deals with L.L. Bean. From a marketing perspective, both entities understood the positive value of producing content during the ski team’s limited New Zealand window. 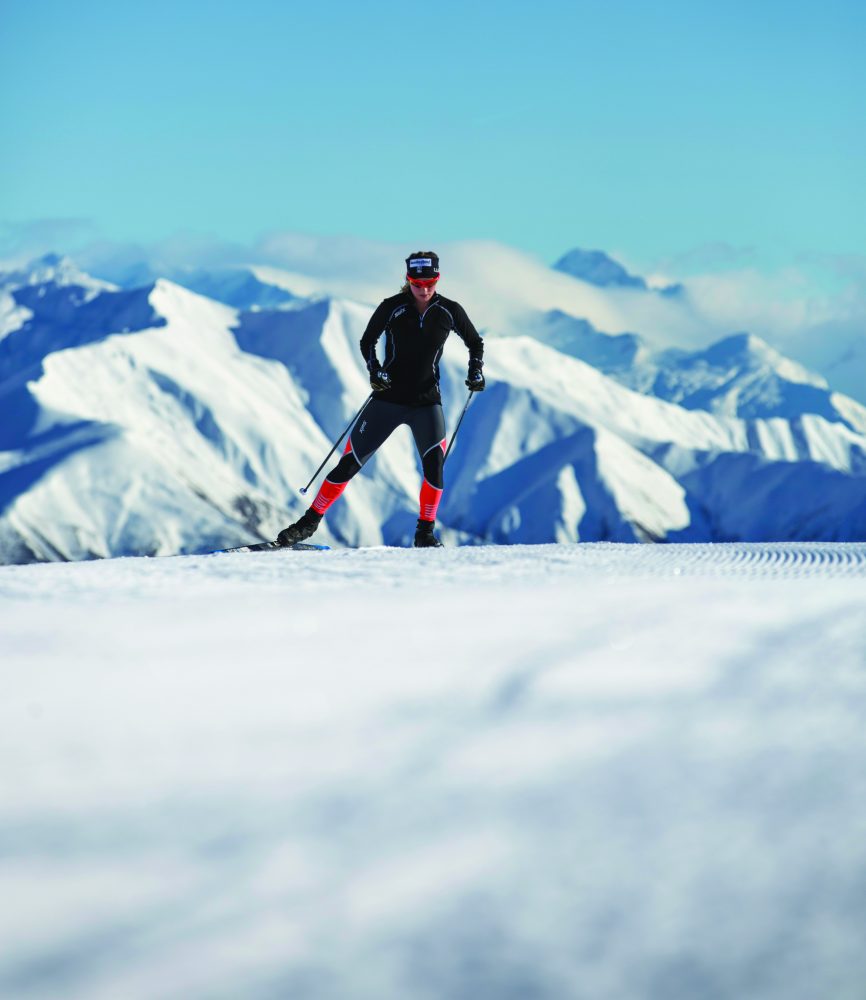 “We have an existing partnership with L.L. Bean, who is a partner of the team, and the IOC, USSA and U.S. Cross Country Team were all integral and extremely helpful in the planning and logistics, giving us the assistance and access we needed to properly tell the story,” Haskins explained. “In the end, we griped about the added stress, money and limited screen time in the movie but we all agreed it would make the movie better to include it. And it paid off, at our world premiere in Portland, OR. last Friday the segment received one of the loudest audience responses and applause of the night when Jessie crossed the finish line.”

Footage of the Diggins and Kikkan Randall Olympic gold stands as the narrative arc’s apogee for the cross-country ski segment. Those Olympic moments still strike a nerve.

Whitcomb relayed a personal story. By chance, a close friend happened to notice Face of Winter‘s world premiere would be showing as he left work recently in Portland. That former skier from St. Lawrence University eventually sat in a packed theater expecting the usual and iconic Warren Miller powder-lust ski shots.

“He had no idea that his favorite sport was being featured,” Whitcomb said. “Then halfway through the movie, when the cross-country segment ran, he was so happy that he just wanted to stand up and start cheering. That was good to hear from someone who was surprised by it all. He was just so proud.”

Once in a while, it’s ok to feel like the cool kid in the room. 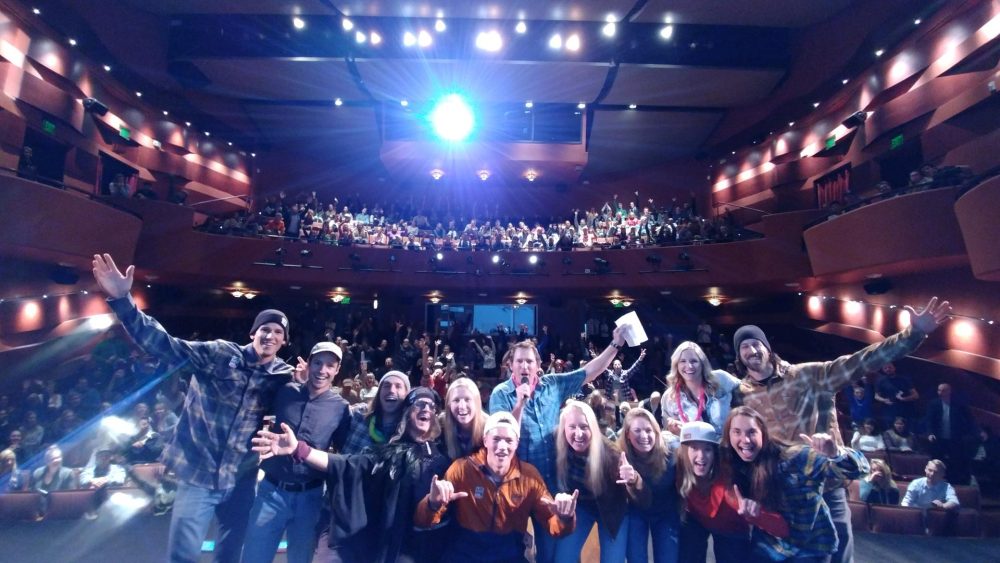 Taking a break during their Park City, Utah training camp, the U.S. Cross Country team was on hand and on stage Oct. 18, for the Salt Lake City opening of Warren Miller’s Face of Winter. (Photo: Justin Miller)