As the Tour de Ski (TdS)  wanes in Val di Fiemme, Italy, position in the overall standings becomes of the utmost importance as after today’s 10-kilometer mass start classic race. There will be only one more opportunity to advance in this season’s TdS – the brutal hill climb up Alpe Cermis.

Ingvild Flugstad Østberg of Norway made it evident that after three podium finishes in the Tour, she no longer wished to be the bridesmaid. Last year, Østberg led the overall standings entering the final stage but was overtaken on the final stage by her teammate Heidi Weng who began the hill climb just two seconds behind her. An eerily similar story unfolded in 2016 when she was passed by Therese Johaug on the steep incline of the Alpe Cermis.

This year, Østberg left nothing to chance in Stage 6. She led the charge from the gun, setting a fast tempo and quickly creating a small gap for herself. While a chase pack of three Russians, Natalia Nepryaeva, Yulia Belorukova, and Anastasia Sedova, and a Finn, Krista Pärmäkoski, kept Østberg in sight, the Norwegian controlled the race all the way to the finish line. On her way to victory, Østberg coyly won the bonus sprint at 7.5 k, earning her additional bonus seconds to 30-second bonus she gained from her win. 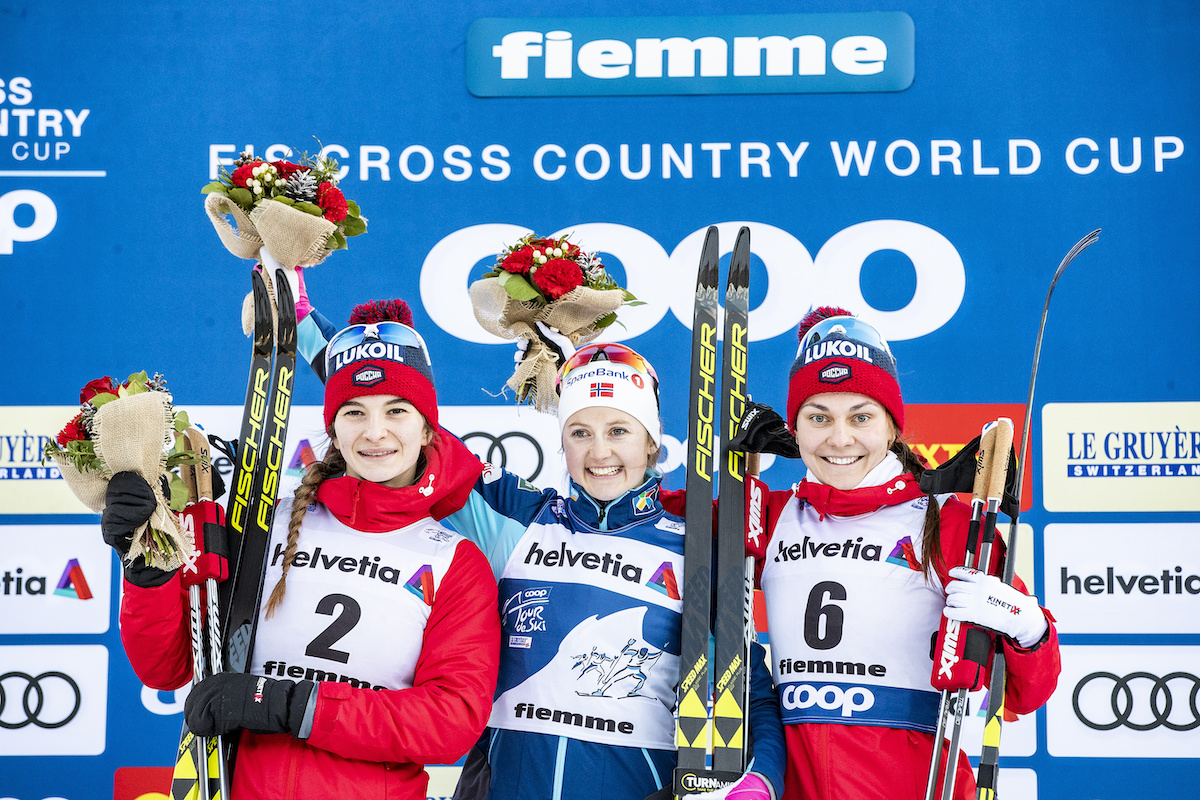 Today marks the Norwegian’s eighth stage win in the Tour de Ski, matching powerhouse Marit Bjørgen. Therese Johaug and Justyna Kowalczyk of Poland are the only women to earn more podiums, 11 and 14 respectively.

Heading into the final stage, the Tour de Ski remains a race of attrition, especially in a World Championship year. Only 33 of the original 75 racers began Stage 6 today.

With a lead in the overall standings of 53.4 seconds over Nepryaeva and 2:13.1 minutes over third place Pärmäkoski, Østberg is in an excellent position to nab the overall win, provided that she can hold up through the brutal hill climb.

“First of all, today’s race was really important, and I’ve been trying to prepare as good as possible,” Østberg said in an interview with the International Ski Federation (FIS). “I was actually just waiting for the Russians and Krista [Pärmäkoski] to attack and tried to stay in front of the field. On the last lap I just had to try my best and maybe I could get some seconds. I am just so happy that I won today. And for sure it’s nice for tomorrow’s race, because that’s maybe not my favorite stage (laughs), so I need every second that I can have on the other competitors. So now I’m soon preparing for the last stage of this year’s Tour de Ski.”

Nepryeava, Belorukova, and Sedova will be fighting to become the first Russian women to make the podium in the Tour de Ski. While Nepryeava is in solid position to accomplish this, Belorukova will need to make up 14 seconds to catch and pass Pärmäkoski during the final stage. Sedova has a significantly larger gap of 50 seconds to close.

Last year’s overall winner, Norway’s Heidi Weng, who has struggled with her usual World Cup podium results since the Olympics in PyeongChang, skied just behind the chase pack to a sixth-place finish. Weng’s results in the Tour show steady improvement for her, which bodes well for the remainder of her World Cup season. 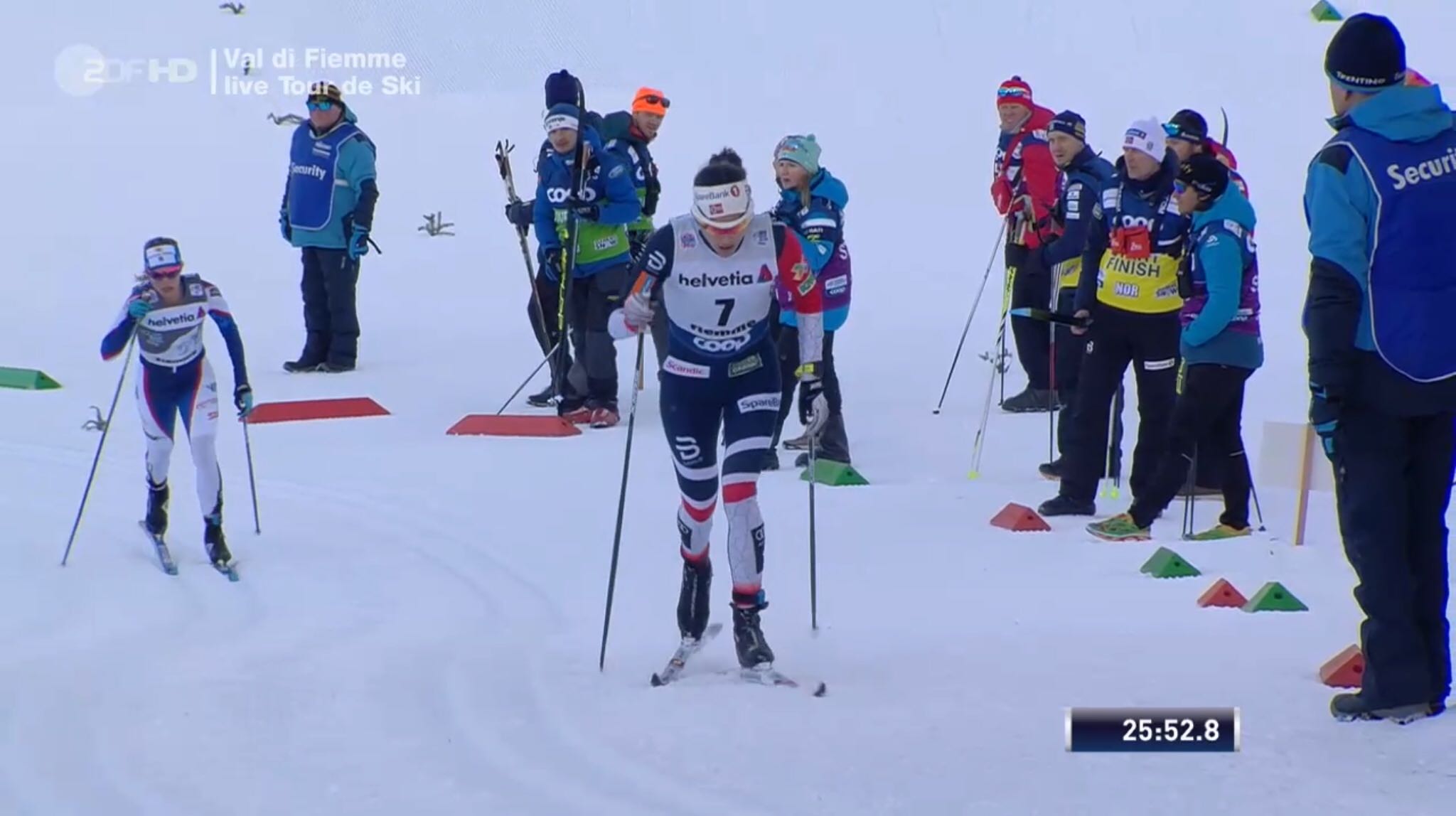 The sole American remaining in the Tour on the women’s side, Jessie Diggins, finished in seventh place (+1:19.3). Drifting slightly off the chase pack after the first 5 k, Diggins found herself in a tough position, out of contact with Weng, but also well ahead of the skiers behind her. Diggins Stage 6 finish bumped her to sixth in the overall standings. She began the day third overall after her close finish in the Stage 5 pursuit. To move back onto the podium, Diggins will need to make up a deficit of 54 seconds in Stage 7.

“I had really competitive skis, which I was really stoked about, and I was really proud of how I raced,” Diggins told FasterSkier in a call. “I felt good through maybe 3 k and then it was just not there. But that is something you can’t control. I didn’t have really good feelings in my body at all, my body was just super tired and out of gas today. But I did the best I could with what I had and kept pushing as hard as possible.” 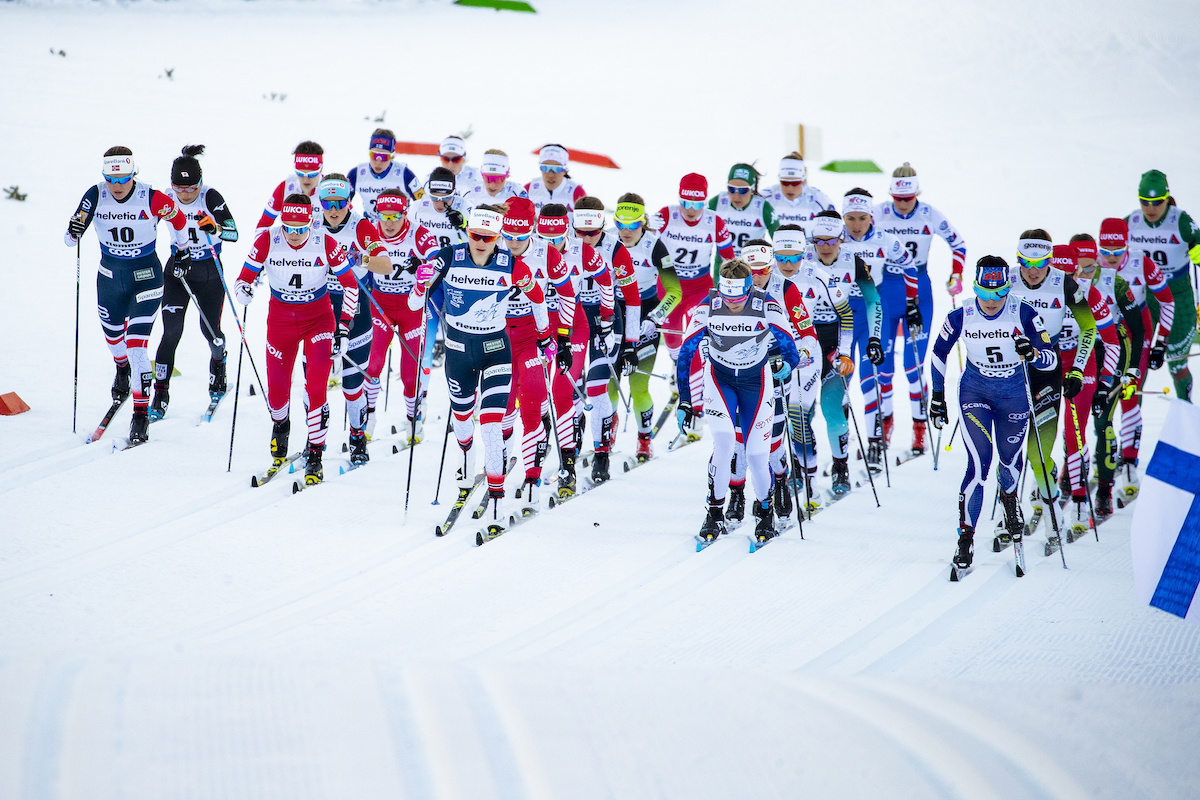 The start of the women’s 10 k classic mass start, Stage 6 of the Tour de Ski.  Jessie Diggins skis in the second track from the right. (Photo: Fischer/Nordic Focus)

While only ten seconds separated Diggins from third place at the start of Stage 7 in last season’s Tour, Diggins performance in the hill climb demonstrates that she is able to remain fierce until the Tour concludes atop the Alpe Cermis. Last year, Diggins clocked one of the fastest time to the top of Alpe Cermis, moving ahead of Pärmäkoski to gain a spot on the podium.

“It totally depends on the energy that your body has,” said Diggins. “At this stage in the Tour, you never know, so I am just recovering and fueling and doing everything I can to give myself the best chance I have tomorrow. Like any race, you go out and you go as hard as you can with what you have.”

While today’s performance may not have been ideal for her overall standing in the Tour, in the larger scheme of her World Cup season, Diggins remains excited about where her fitness is.

“For me, this is really great preparation for Seefeld, and I’m just really happy that I’ve been able to do the full Tour,” she said. “This is really key for my prep for World Champs, so big picture, I am amazed at how well the tour has gone. Being sick twice in Period 1, then coming onto the Tour and getting four podiums out of it is awesome. That’s great. That’s more than I thought I would get frankly, and so it’s been a really really fun ride and big picture this is going really well. I am really pleased with how the plan is going.”

“I had a great start today and felt good for the first two laps, but I faded a bit in the second half of the race,” said Nishikawa in a CCC press release. “Women’s racing always starts out really fast, so I was just trying to hang on in the pack and ski relaxed for as long as I could.”

“I am looking forward to the climb tomorrow with a mix of excitement and nerves,” Nishikawa continued. “I will push as hard as my legs will go and see what happens.”

Racing continues tomorrow for the final stage of the 2018/2019 Tour de Ski.