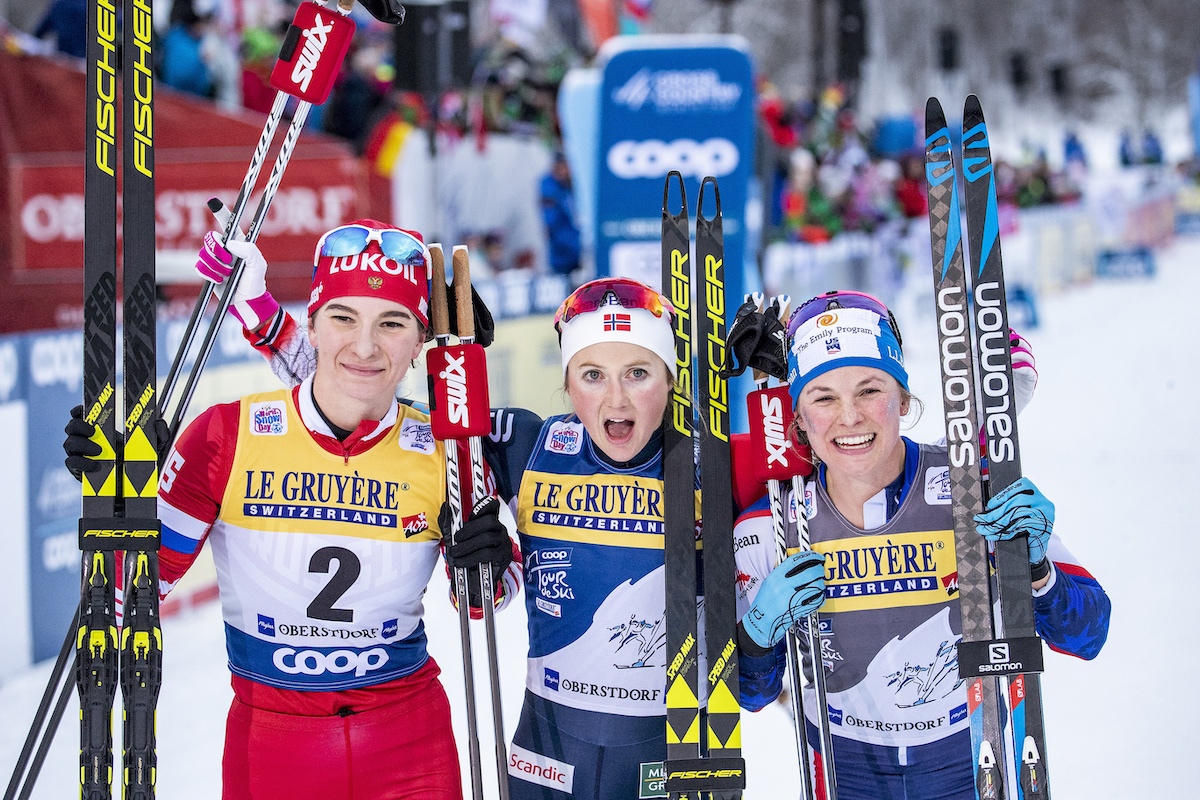 The real race tension today was the race for third between the U.S. Ski Team’s (USST) Jessie Diggins and Russia’s Yulia Belorukova during the 10-kilometer freestyle pursuit in Oberstdorf, Germany, Stage 5 of the Tour de Ski (TdS).

The race up front was a solo effort, as Ingvild Flugstad Østberg of Norway started 24 seconds ahead of Russian skier Natalia Nepryaeva. Østberg held that lead until the finish, winning with a time of 26:21.2. Nepryaeva placed second (+30.4). Østberg continues to hold the overall lead in the TdS after today’s race.

“It was a really good and I felt really good but at the same time it was both mentally and physically pretty hard to be in front,” Østberg told the International Ski Federation (FIS) after the race. “I saw all the girls chasing me all the time so I just had to work really hard.” 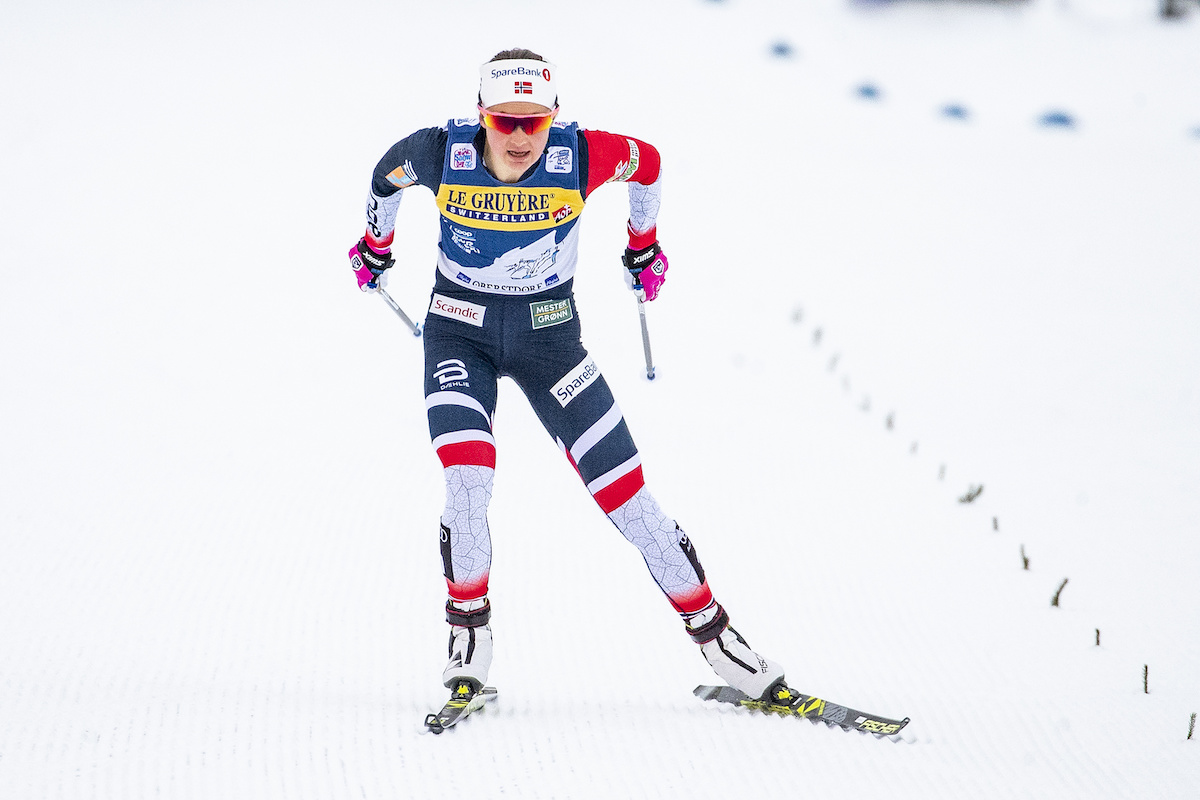 Nepryaeva skied a consistent race as well. Østberg was almost always in her sight giving her someone to physically chase besides a time gap, up ahead. She only lost six seconds on Østberg throughout the race and kept the chase pack led by Diggins and Finland’s Krista Pärmäkoski at bay.

This was Nepryaeva’s third podium of the TdS; she won Stage  — a 10k freestyle individual start, and she placed second in yesterday’s Stage 4 10k classic mass start. Nepryaeva still sits in second place behind Østberg in the overall TdS standings. Østberg heads into Stage 6 with a 35.4 second cushion over Nepryaeva. 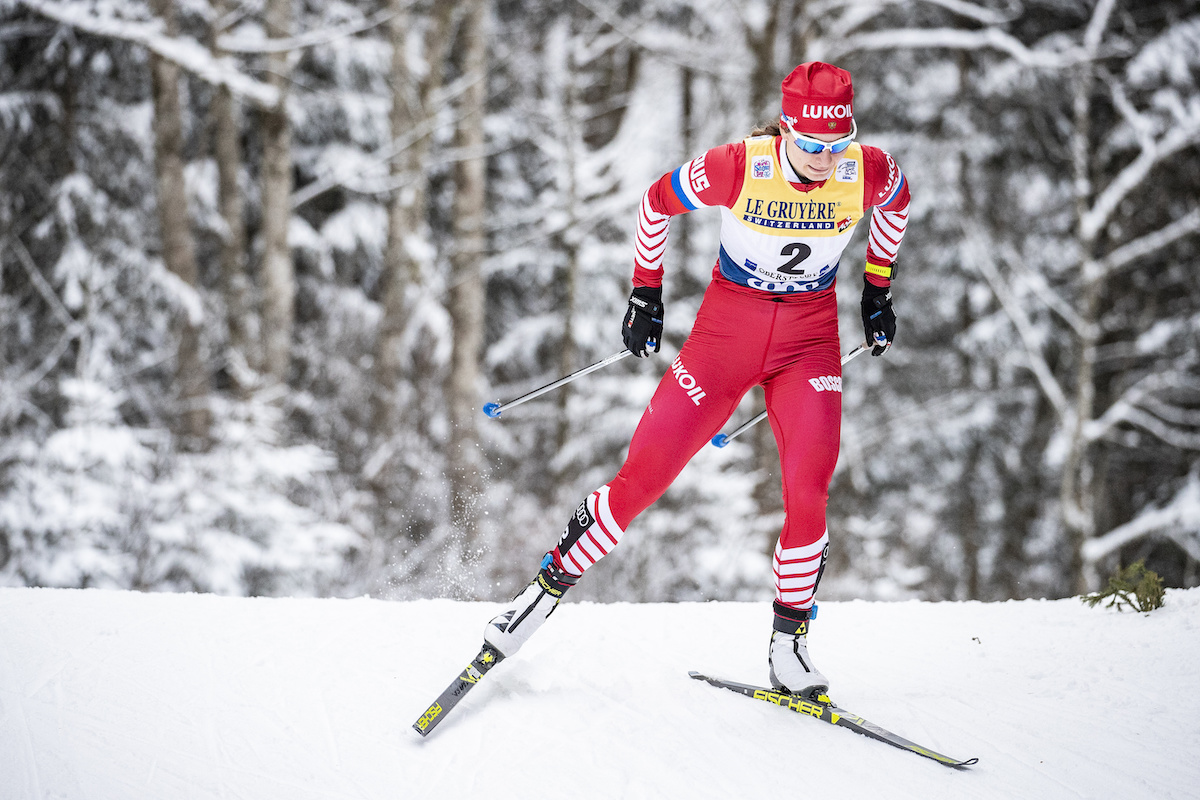 Natalia Nepryaeva of Russia on her way to second place in Thursday’s Stage 5 of the Tour de Ski. (Photo: Fischer/Nordic Focus)

The for third began in earnest when Diggins and Pärmäkoski caught the stage’s third starter, Belorukova, within the first three k of the race. (Belorukova began 15 seconds ahead of Diggins; Pärmäkoski began four seconds in back of the American.)

“I was really excited to ski with Krista [Pärmäkoski] which was really fun,” Diggins said in a call. “I really love working with her because she always takes her turn leading and we basically split the race in half. It was so fun because we were motoring. And she also is someone who also never steps on your skis, never steps on your poles. Super fun to work with because she gets it. If we both work hard and share the load of leading then we are both going to have a great day. That was the plan and we talked about it beforehand.”

“Just letting it unfold together, pushing each other, trying to get the fastest time,” Whitcomb said. “So the strategy was to work with Krista, Krista leading on some of the climbs, and Jessie leading on some of the descents and flats, using the strengths of each of them to put time on the leaders, and it worked pretty well.”

(Diggins skied the fastest time of day in 26:07.5 minutes, with the Finn notching the second fastest time, 7.6 seconds back.)

The group of Diggins, Pärmäkoski, and Belorukova skied together once the three linked-up. As the pace quickened in the final k, Pärmäkoski began dropping behind.

Diggins and Belorukova had comparable skis, remaining in contact on the downhills. When they came into the finishing stretch together each skier remained locked on the remaining podium spot.

It came down to a toe.

Diggins out lunged Belorukova in a photo finish. For Diggins, this was her second podium of the TdS. She was third in Val Müstair, Switzerland’s, Stage 3 skate sprint. With her third place today, Diggins is third overall in the Tour, 1:22.6 minutes behind overall leader Østberg.

As noted in the Stage 4 race report, the yesterday’s kick waxing was problematic for many teams including the U.S. Whitcomb explained the collective team dynamic remains positive after processing yesterday’s frustrations.

“Today was good, it was a testament to the team’s ability to regroup,” Whitcomb said. “We don’t dance around mistakes that we make, we confront them and talk directly with the athletes and explain what we thought we did wrong and everything is cool. If there’s somebody that cares more about this than the athletes it’s each of the athlete’s techs. And when any team misses a race, especially a high profile one, the pain extends through the whole team, and we feel it hard. It’s important to address it and figure out how to learn from our mistakes and then just move forward. So we didn’t spend too much time dwelling on it but we hit it hard, and then we are on to the next day.”

For Diggins, dealing with disappointment has a time limit, then she redirects her energy to what remains in her control.

“To be perfectly honest, it was frustrating yesterday because I know I am in better shape and skiing better than that,” Diggins explained. “So it is hard to lose because of the way bonus seconds work. It is really hard to lose that much time and is literally nothing you can do except go out and race hard.”

Diggins said she went into this season’s Tour to win. Her performance today was a stamp declaring she has moved on.

“When I was in the leader bib, I was like I am skiing with these girls, I am in good shape right now, we can duke it out, this is possible,” Diggins said. (The U.S. skier was in the TdS leader’s bib for Stage 4.) Yet, she stated she has not imposed undo pressure on herself to perform.

“The big thing about this Tour for me is that it sets me up well for the rest of the season,” said Diggins.

Today was Diggins 19th career podium, and as she sets her sights on the World Championships later this season, she insists she is where she wants to be.

“I want to make sure I am seeing the bigger picture and that is right where I want to be right now and that is a good feeling,” Diggins said. 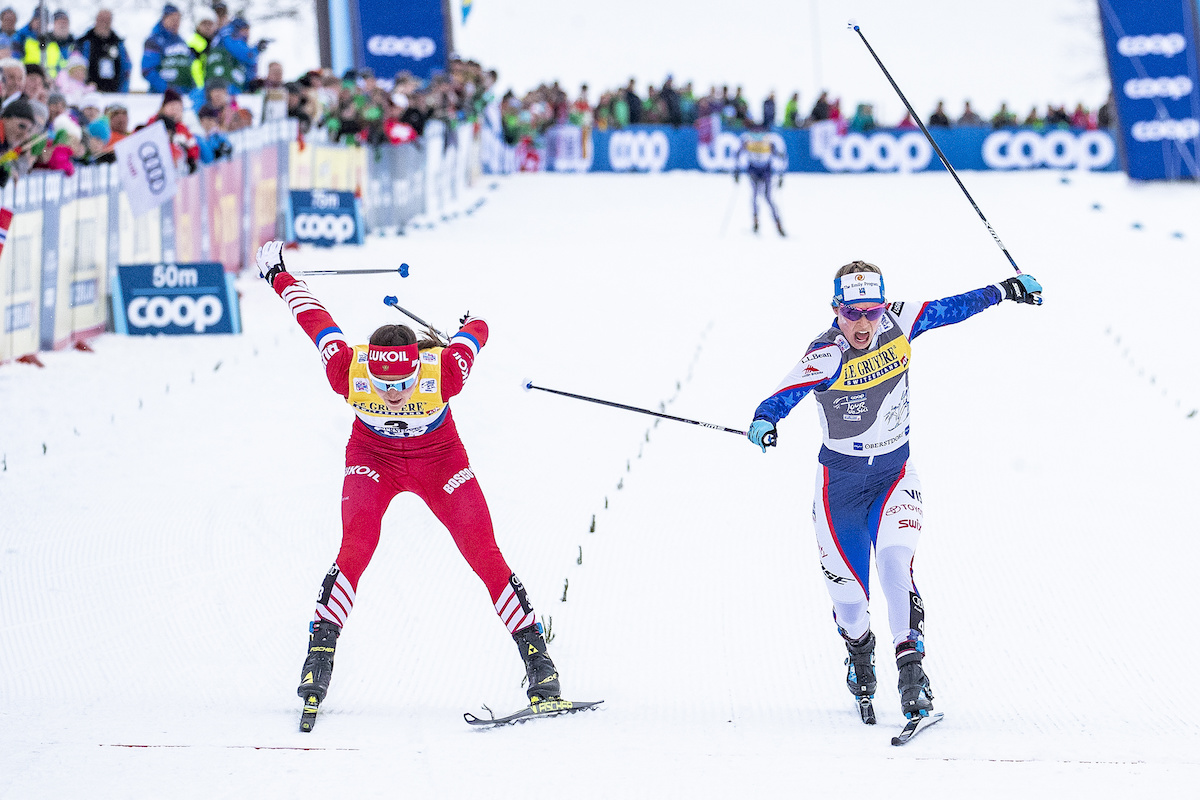 Sadie Bjornsen of the US Ski Team placed 11th in today’s race. She started in ninth place, 2:54 seconds behind Østberg and finished 4:07.8 behind her. She skied with Austria’s Teresa Stadlober for the first half of the race, but Bjornsen wasn’t able to hold on. She eventually dropped back to 11th for the second half of the race. Bjornsen now sits in 11th in the overall TdS standings. However, as planned, Bjornsen has exited the TdS.

“Well, that’s a wrap for my Tour de Ski racing this season, signing out in 11th place,” Bjornsen wrote in an email to several news outlets. “I decided to not complete the tour this year in order to get a good training block in without too much race fatigue. With my heart set on World Championships this year, my coach and I made a plan to only go through five stages. It’s one of the hardest things in the world to drop from the tour, because it’s my favorite racing of the season, but I have big goals ahead in February.

“It was a tough tour for me after coming back from a nasty virus over the holidays. I had a really exciting day one, and amazing feelings, but haven’t found quite the spark in my body I have wanted since. I will take the next two weeks to get 100% healthy, get some good volume in, and get a head that is ready to fight again. In the meantime, I am channeling every last bit of energy towards Jessie. That girl is on fire right now, and I can’t wait to see what happens. Let’s hope the weather and waxing are a little more straightforward in Val di Fiemme, and she gets closer to those front girls!

“Catch up with you next in Otepaa, for a classic World Cup weekend. After so much skating, I’m really looking forward to getting back to the classical style!”

Canada’s Emily Nishikawa finished 30th today. This was her second-best race of the season. She finished 23rd in the Davos two weeks ago and she was 34th yesterday in the 10k classic mass start, Stage 4 of the TdS.