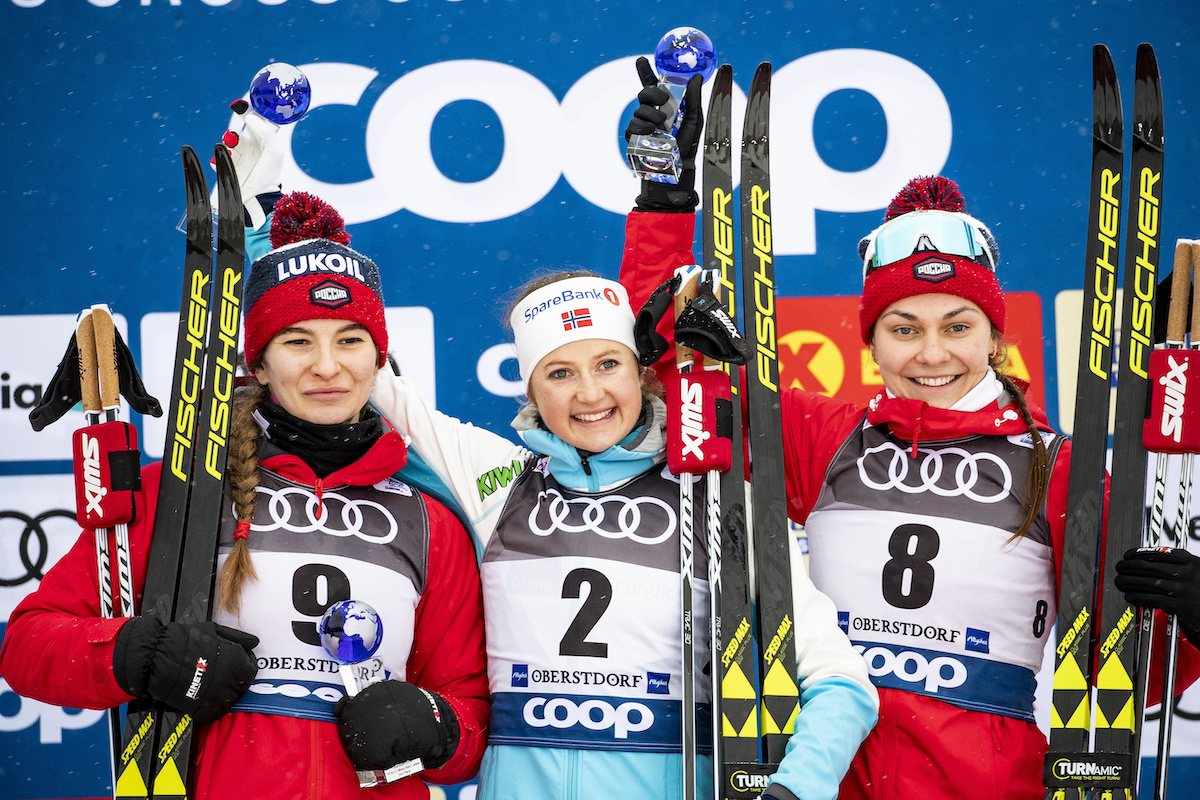 It was a snowy and grabby day in Oberstdorf, Germany, for Stage 4 of the Tour de Ski (TdS). The temperatures were sitting right around freezing, making it challenging conditions for dialing kick wax. Many racers skied on zeros for this 10-kilometer classic mass start. But throughout the race, many women appeared to be struggling to find the right amount of kick as slipping on the hills was a common theme for some.

“The races were typically hard Oberstdorf races, in some ways, it’s what every cross-country skier dreads and in other ways, it’s what is so great about this sport,” Whitcomb said. “It was a really challenging day surface wise, conditions were slow, the course was hard and it snowed like hell, so it was a challenging day today.” 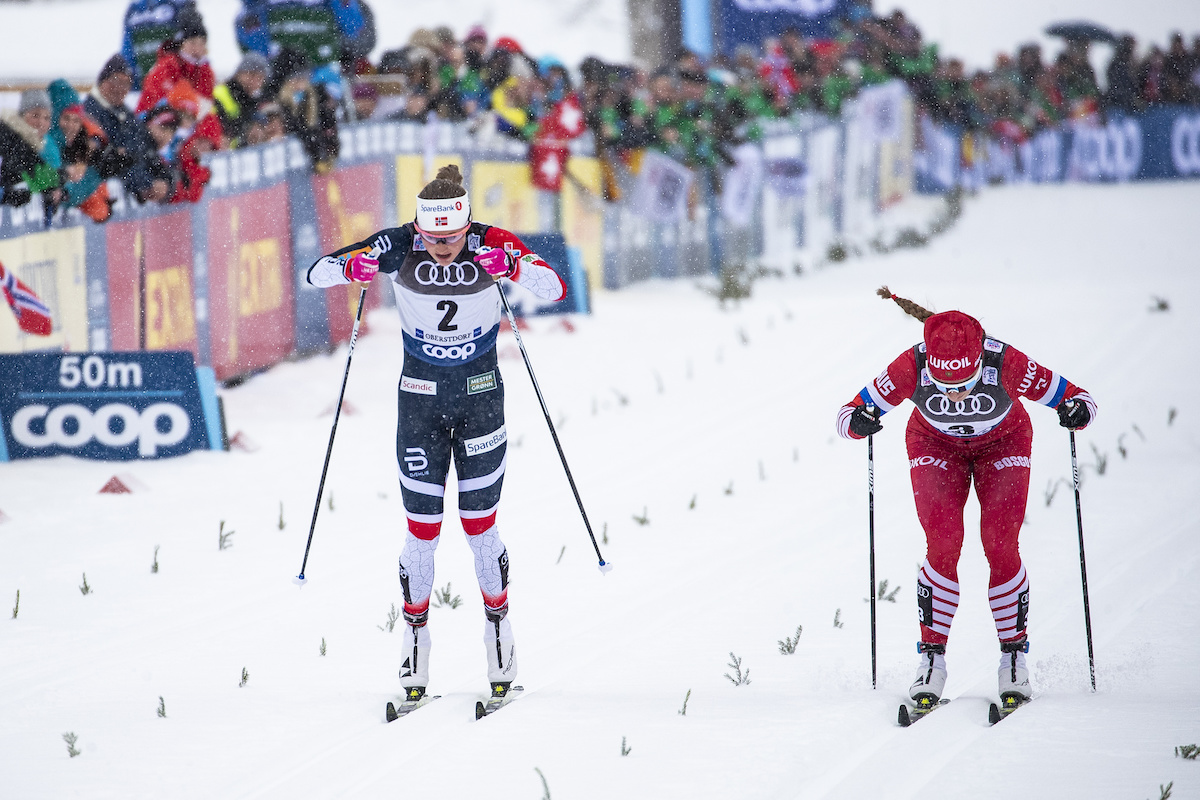 Wearing bib 2 as the TdS second overall skier, Norway’s Ingvild Flugstad Østberg fought hard for the victory today finishing in 32:08.9 minutes. Østberg led the majority of the race, only giving up the lead three times before quickly taking it back — once to Krista Pärmäkoski of Finland and twice to Natalia Nepryaeva of Russia.

Østberg spoke with an International Ski Federation (FIS) reporter after the race and noted she had to be persistent.

“It was a really tough race and when we saw it was snowing and knew it would be hard to be in front, but I knew I had to try and I just had to work and work and work and maybe people would fall off one by one,” Østberg told FIS.

Nepryaeva attempted to pull away from Østberg in the finish stretch and nearly took the win. But Østberg out lunged her across the line.

Østberg recounted, “the Russian were really strong, especially in the last uphill. But today, I just decided to give it all and in the last 100 meters, I just had to try and it was an incredible feeling to cross the finish line first.”

Today’s victory makes Østberg the overall leader of the TdS.

“It’s really fun to be in the lead of the Tour de Ski. I’ve been here before and it’s always fun and I’ve been working hard for four stages. But I know a lot can happen in the next three, so I just have to take it race by race,” Østberg said.

In nearly taking the win, Nepryaeva displayed she has the overall fitness to contest a top overall spot at the Tour. The twenty-three-year-old Nepryaeva kept pace with Østberg the entire race. She never was more than five seconds behind the day’s winner. In the last 2.5-k of the race, Nepryaeva’s teammate Anastasia Sedova caught her, allowing the two Russians to work together and challenge Østberg.

Despite being out-lunged, this is not the first time this season that Nepryaeva has gone head to head with Østberg. During Stage 2 of this year’s Tour, a 10 k skate, Nepryaeva beat Østberg by just under a half-second for her first career World Cup victory. After today’s result, Nepryaeva is positioned second place in the overall TdS standings.

Sedova skied a very strong race as well, putting in a massive effort to finish third. After the first 2k, she was in 11th, but she moved quickly through the pack and by 7.5k she was in the mix for a podium position. Once catching her teammate Nepryaeva, Sedova settled in with the winning pace and finished five seconds behind Østberg. Sedova’s third-place finish put her into sixth in the overall TdS standings.

Jessie Diggins of the U.S. Ski Team was the first North American to cross the finish line. Diggins started today with the TdS leader’s bib. In what was admittedly a tough waxing day, Diggins held onto the lead pack for the first kilometer before falling back to 24th. After the race’s mid-point, Diggins found her groove. She surged forward to 12th place at the 5 k time check, 18.7 seconds back. Diggins finished in 11th (+58.5). After Stage 4, Diggins is in fourth overall in the TdS standings, 1:26.3 minutes behind overall leader Østberg.

“Frankly, we missed the boat on the wax today, but I fought as hard as I could and I know I’m in great shape right now,” Diggins texted FasterSkier after the race. “I did everything I could with what I had today! And now the pressure of the leader’s bib is 100% off, and I’m just going to ski as hard as I can tomorrow and recover as smart as I can!”

“We did not have good skis for the women, it was straight up just a really difficult race for them because of this,” Whitcomb said. “What I will say is about 2/3rds of the race had very bad skis and our girls did incredibly well considering those things.”

Diggins will be racing in the next three stages of the TdS as she plans on completing the Tour.

“The goal remains the same for Jessie, whether starting 1st, 4th or 50th,” Whitcomb said. “Until the finish line on Alpe Cermis, we’re racing to win. It’s just how she does things.” 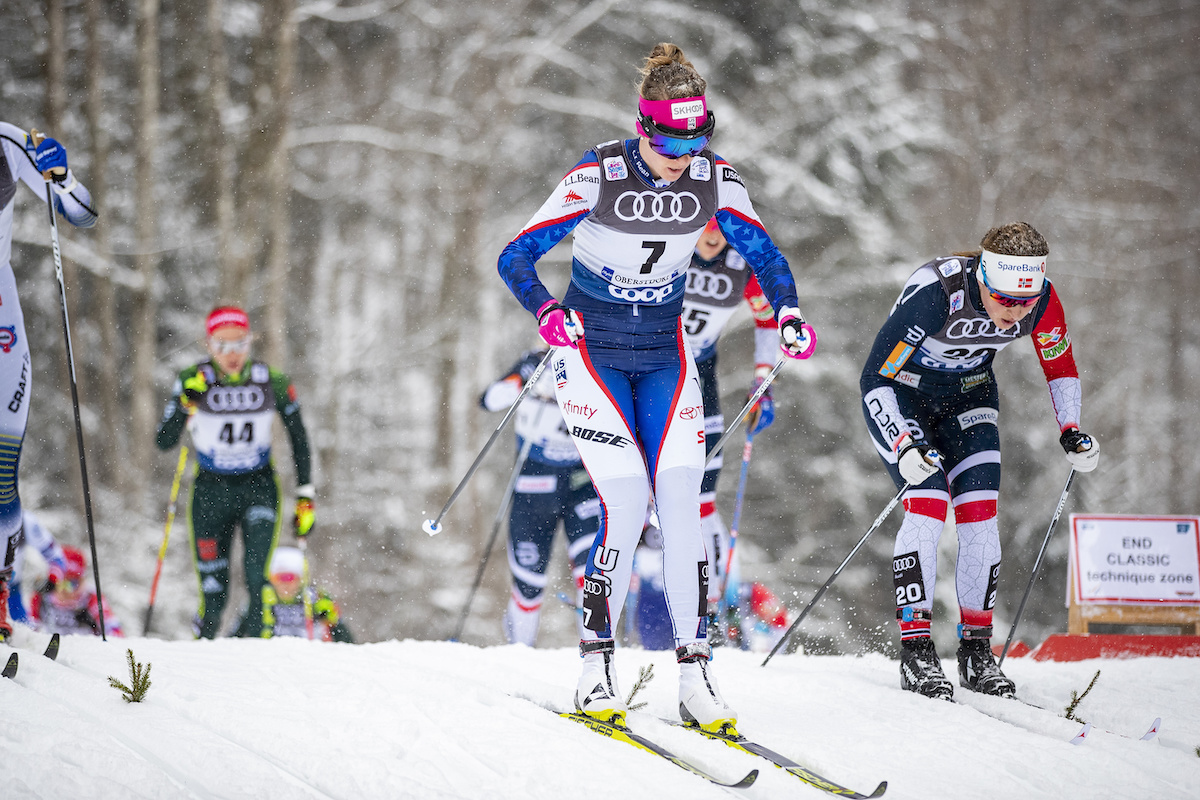 Diggins and Bjornsen skied in the same pack for the majority of the race. During the first half of the race, Bjornsen sat in 17th. When Diggins made a move, skiing into 12th, Bjornsen followed suit, skiing to 15th. Bjornsen held this position for the remainder of the race and finished 1:05.4 minutes behind Østberg. Today’s result lands Bjornsen in 10th in the overall TdS standings.

“It was a really challenging race out there,” Bjornsen texted. “Unfortunately, our team really missed the kick, so we had to fight with what we had. Our skis were icing really bad, which made it quite challenging to ski both the uphills and the downhills. Thank goodness there were a few flat sections out there to feel like I was out for a ski race. It’s a bummer to have a day like today because my body felt really good, and I really like this course for classic skiing- but that’s life, and sometimes you have to just laugh it off and hope you can learn something as a team from the experience.”

Bjornsen will exit the Tour after tomorrow’s fifth stage.

“Tomorrow will be the last race of my tour, as I have planned to not complete the full tour this year, and try to do a training block without too much accumulated race fatigue,” Bjornsen explained. “So, let’s hope tomorrow can work out a little better, and I can make some use of these good feelings!” Bjornsen told FasterSkier.

After her exit, Diggins will be heading to Seefeld, Austria to join some of her other teammates for a mini-training camp before World Cup racing starts up again after the Tour.

“Given how strong Jessie and Sadie skied today with skis that weren’t working for them, I’m very optimistic about tomorrow,” Whitcomb stated. “These two are strong right now, and pretty pissed off.  That’s a good combo to bet on.”