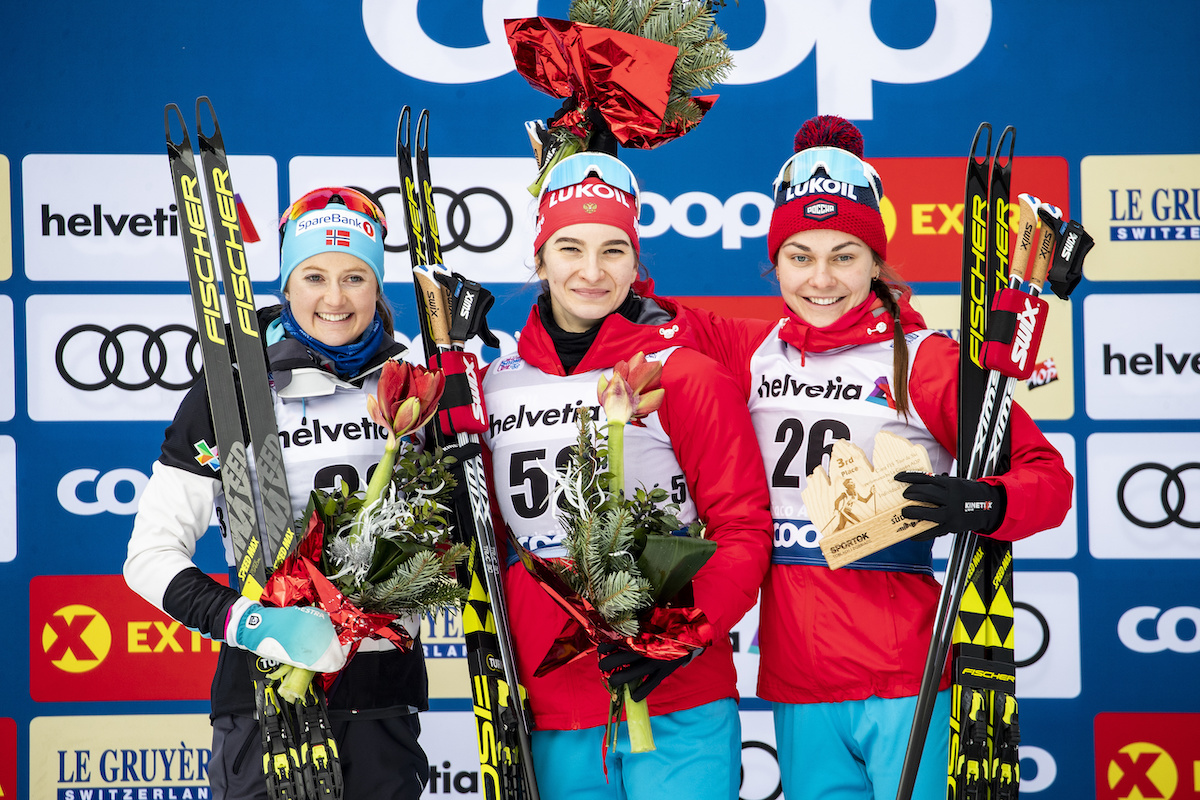 Stage 2 of the Tour de Ski brought the first of five distance events, a 10-kilometer freestyle individual start in Toblach, Italy. The stage is a challenge for the sprinters who shined in Stage 1, and an opportunity for distance skiers to rise through the rankings. With Norway’s Therese Johaug, winner of every distance World Cup event this season, sitting out the Tour de Ski (TdS), the top podium position was up for grabs.

Another Norweign, Ingvild Flugstad Østberg sat 16th overall after Stage 1. Østberg has the experience to excel in the Tour — she finished second in the overall Tour standings the last two seasons and is second overall on the World Cup. She’s also earned a podium position in each skate distance event this season, except for Lillehammer, where she took fourth — demonstrating she was in great form for longer races coming into the Tour. 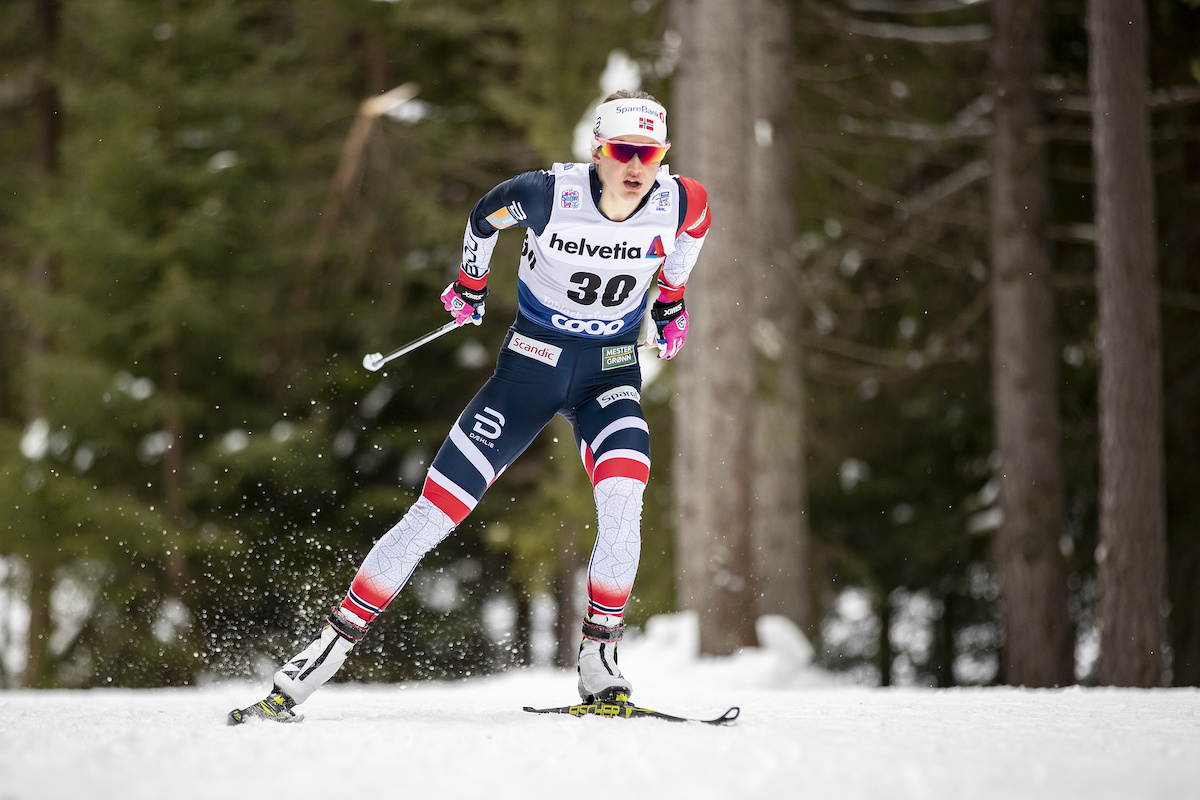 Wearing bib 30, Østberg started the race just behind her teammate, Heidi Weng, winner of the 2016 and 2017 Tour de Ski. She moved smoothly and powerfully, over the course, clocking times that held her the lead over subsequent skiers for much of the race. However, Østberg’s stature in the leader’s chair began to diminish when Natalia Nepryaeva of Russia, in bib 58, gave Østberg something to worry about.

As the Norwegian sat in the leader’s chair watching the monitor, Nepryaeva consistently skied through checkpoints just ahead of Østberg, gaining a slim margin of up to 4.5 seconds at the 5 k mark. That time margin could go either way; a win or a second place. As the finish line approached Nepryaeva’s time-gap began to wither. As Østberg held her breath, the Russian slid across the finish line 0.3 seconds faster than Østberg’s, stopping the clock in 23:19.9 minutes. Nepryaeva’s win, her first World Cup Victory, also bumped her into the Tour’s overall lead. 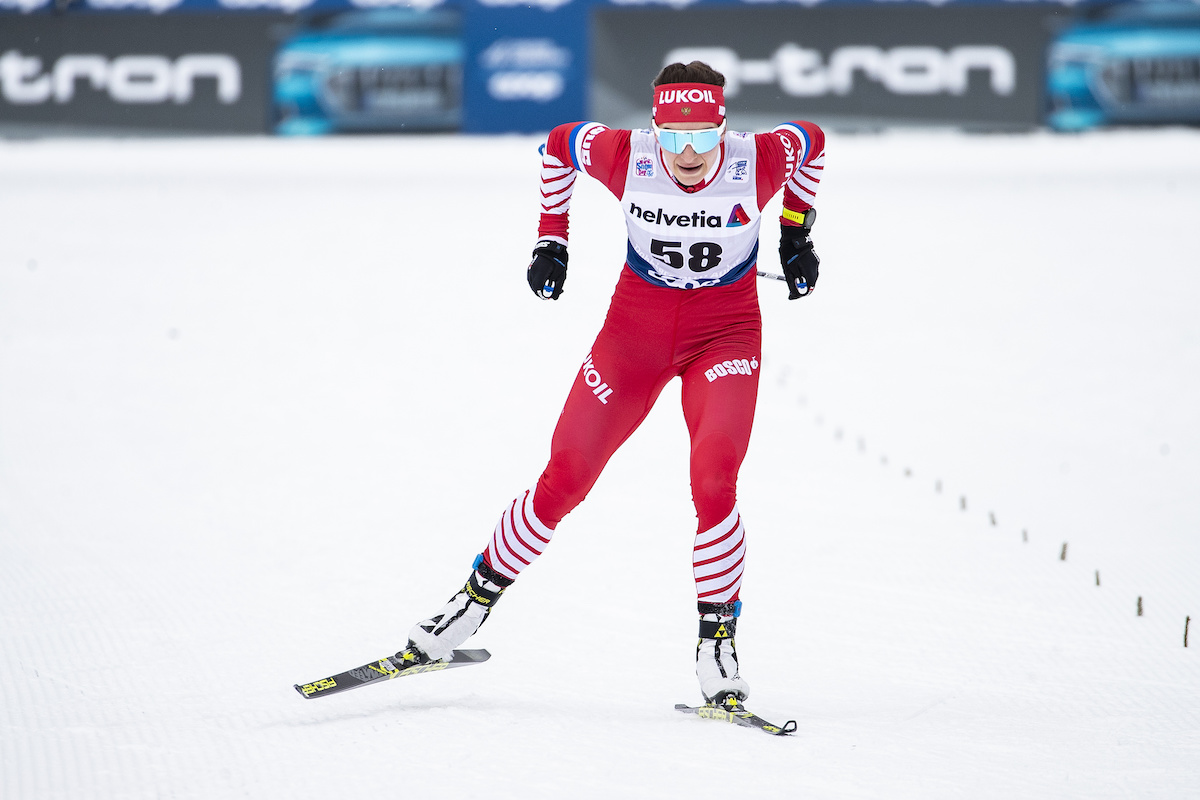 Natalia Nepryaeva of Russia on her way to winning the 10 k skate in Toblach, Italy — the second stage of the Tour de Ski. .(Photo: Fischer/Nordic Focus)

“I am filled with emotions,” Nepryaeva told the International Ski Federation (FIS). “Because it’s my first victory at the World Cup level, and for sure I want to keep this leader bib as long as possible.”

In another strong day for the American women, Jessie Diggins skied to a sixth-place finish (+27.2). Coupled with yesterday’s third-place in the skate sprint, Diggins now sits in second place in the Tour de Ski overall standings. Østberg holds the third overall, followed by Yulia Belorukova of Russia in fourth, and Pärmäkoski in fifth.

“Today was a solid race,” Diggins told FasterSkier in a call. “I didn’t feel amazing, I was still carrying a bit of fatigue from skiing all the rounds [in the sprint race] yesterday which is to be expected. I was just happy to put together a good solid race and not lose too much time to the leaders. I think to have a good Tour, if you can put together a bunch of B+ and A- performances then it will lead to a really good Tour overall. You don’t need to have any standout days, you need to just have consistent skiing. So for me, the goal was to just try to ski really smooth and strong and look for every second to get out there.”

While it was a slow start to the season for Diggins, she is feeling refreshed and excited after the holiday break.

“Things didn’t go entirely according to plan in Period 1,” Diggins shared. “I got sick twice, which is always a huge bummer, but over Christmas break I was able to relax and rest and get happy again which is really important for me, and so I came back for period 2 actually excited to race, feeling like I was going to enjoy the Tour because it’s a really fun event so I think that mentally I’m right where I need to be, having fun and enjoying this crazy event.”

Following Diggins for the U.S., Sadie Bjornsen skied to a 16th place finish (+1:07.8), followed by Sophie Caldwell in 36th (+1:45.2). Bjornsen, who also raced in all of yesterday’s sprint heats, may also have been experiencing some of the accumulating fatigue impacting all athletes during the Tour. 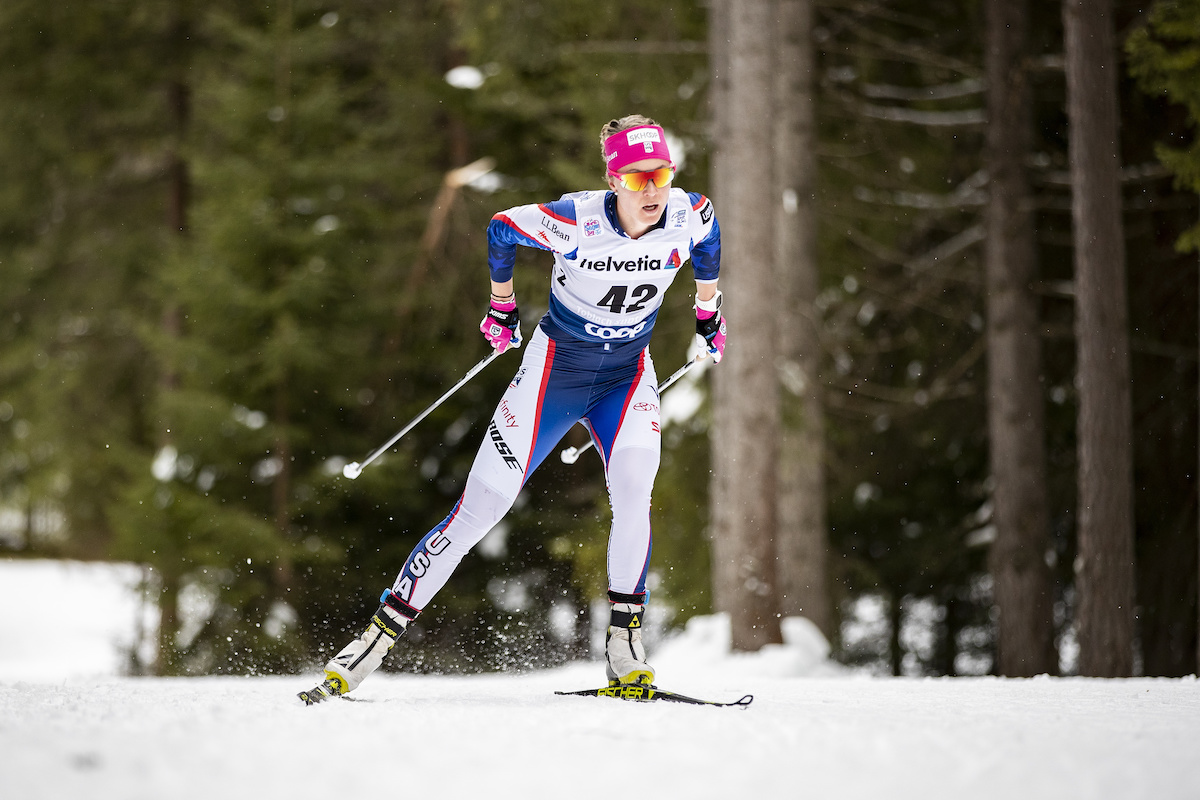 “The day went quite well for the women,” wrote Matt Whitcomb in an email. “Jessie protected her success from yesterday with a reasonably tight 6th place today, so we’re obviously thrilled with her 2nd in the Tour standings.  She’s set herself up for a great tour, but the key for us is to take it day by day and not get caught up in expectations. The tour can be the most fun event of the year if we remember to enjoy it. Based on the vibe in the van, I’d say they’re succeeding.  Sadie and Sophie skied strong today, but all three were missing a gear after a tough day of sprinting.”

It was also a noteworthy day for Emily Nishikawa of Canada, finishing just ahead of Caldwell in 35th (+1:44.6).

“I was happy with the way I skied the first lap and got to follow Jessie through the downhill section,” Nishikawa wrote in an email. “I died a bit at the start of the 2nd lap but did everything I could to keep the speed high. I am happy with how skied and am looking forward to the next one!”

Between the crowded race schedule and travel, the Tour can create an immense amount of fatigue for athletes. It is for this reason that many athletes, including Bjornsen and Caldwell, will leave the tour after their targeted events have been completed. As Diggins is committed to racing throughout the tour, her recovery and race strategy must be mindful of this tax. To expedite travel to Val Müstair, the women’s team left shortly after their event commenced, giving them more downtime at the next venue.

“Because we have a staff of 8 (5 techs, 2 coaches, 1 massage), we were able to zip the women to Val Mustair after they’d eaten lunch,” Whitcomb explained. “We’ve arrived in good time, and dinner was waiting for us at a Hotel we’ve stayed with for years.”

The Tour de Ski continues with a freestyle sprint in Val Müstair on January 1st.