Toblach, Italy. A stunning stadium and backdrop with the Dolomites lording over the venue and a steady cling-clang of baritone bells greeted skiers along portions of the course. Stage 3 in Toblach, a 10-kilometer interval start skate, turbocharged the 2019-2020 Tour de Ski (TDS). 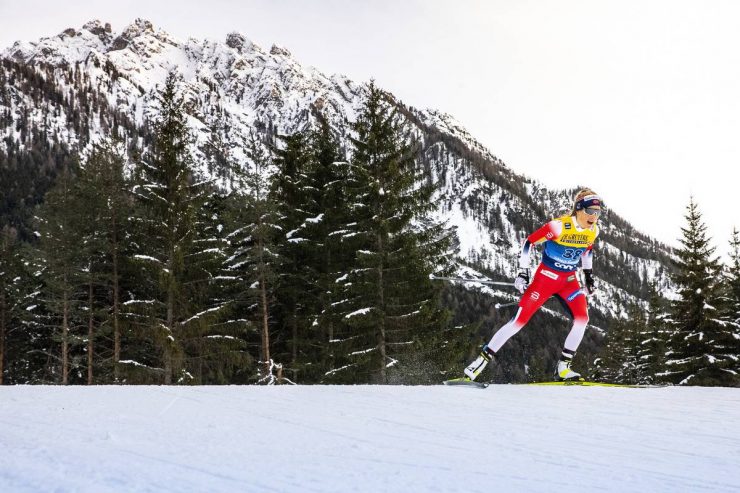 Another win for Therese Johaug, albeit by a small margin, during Stage 3 of the 2019/2020 Tour de Ski in Toblach, Italy. (Photo: NordicFocus)

After two stages, a Stage 1 mass start skate and Stage 2 skate sprint, Russia’s Natalia Nepryaeva sat atop the overall standings. In third overall, Norway’s imminent threat, Therese Johaug, was positioned only five seconds back. Other names to watch, like Ingvild Flugstad Østberg, also from Norway, was seventh overall, 27 seconds back.

With three distance stages in a row —  today’s 10 k skate, Wednesday’s 10 k classic pursuit (both in Toblach) and a Stage 5 10 k classic mass start in Val di Fiemme — this mid-stretch of the TdS would firm up the overall standings.

We’ll say this upfront with a bit of biased towards the spectacle of mass starts — this was fun-to-watch on-the-edge-of-your-seat interval start racing. Imagine a window for FIS live timing open on the desktop, a live stream of the racing open in another, and some texting banter here and there about the close splits, and it was a highlight so far of the young ski racing year.

Two laps around a working 5 k course featuring two climbing sections, one beginning at 1.4 k, the other at 2.5 k, was enough to jostle the standings and draw out some great performances. 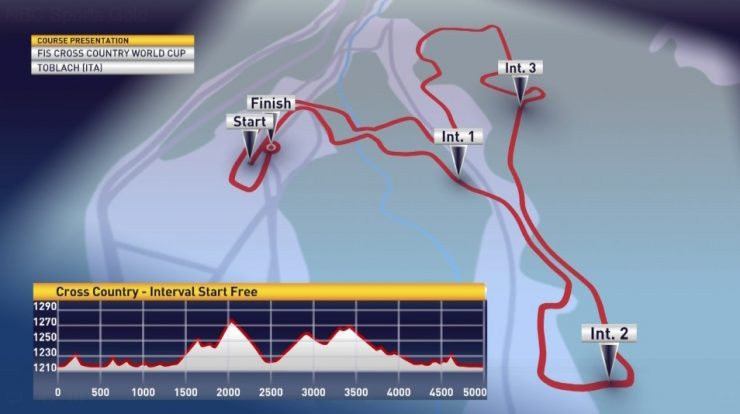 23:51.9 was the winning time for Johaug. That Johaug won is no surprise. She’s the winner of the last 15 of 16 distance races on the World Cup. What startled many was the eye-blink time difference between Johaug and Østberg. 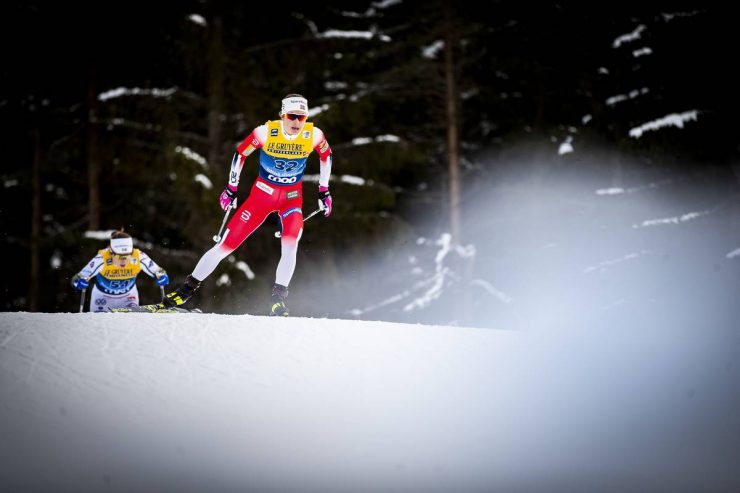 Ingvild Flugstad Østberg on her way to a close second place in Stage 3 of the TdS in Toblach, Italy. Stage 3 was a 10 k interval start skate. (Photo: NoridcFocus) 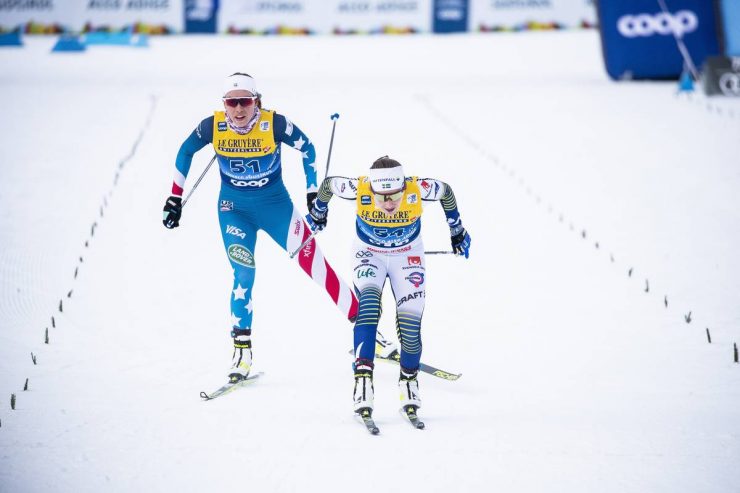 Ebba Anderson slides across the finish in Stage 3 of the 2019/2020 Tour de Ski in Toblach, Italy. Wearing bib 51, Katharine Ogden finishes just outside the points in 34th. (Photo: NordicFocus)

Fast forward to today’s third stage in Toblach, and 5 k in, Johaug had the fastest time with Østberg 8.9 seconds back. At 6.7 k Østberg was 4.1 seconds behind. With almost all of the climbing past, at 8 k, Østberg had pulled ahead by an ephemeral 0.1.

In the armchair analysis, we should note that Østberg began in bib 32, Johaug in 38. Of the top-10 skiers on Tuesday, only two began before Østberg making her effort amidst less than perfect timesplit information that much more remarkable. Prior to the TdS, Østberg had been kept from competing by the National Team for not meeting certain health metrics. This was her third World Cup race of the season.

The reigning TdS champion arrived at this TdS primed. 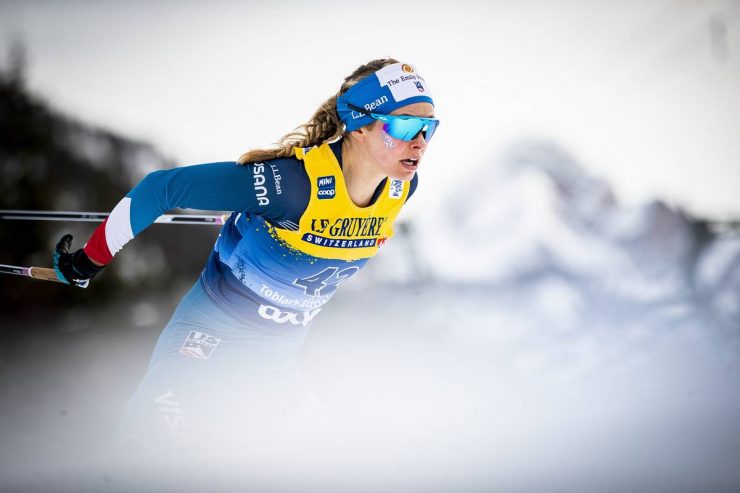 Jessie Diggins skiing to seventh overall during Stage 3 of the TdS in Toblach, Italy. (Photo: NordicFocus) 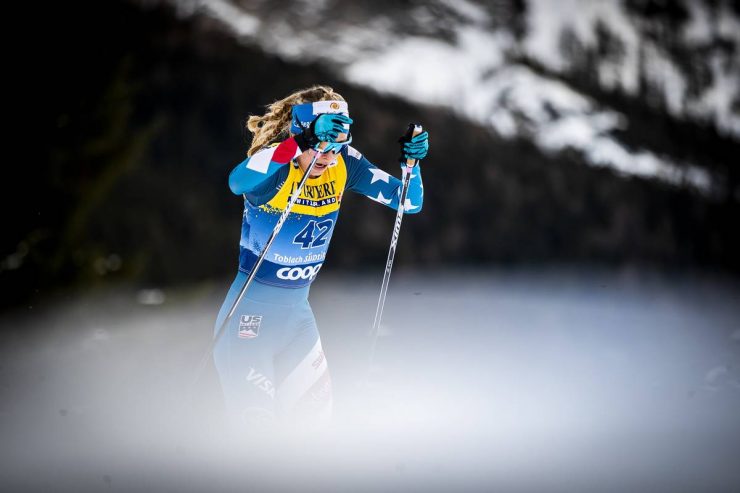 Jessie Diggins skiing to seventh overall during Stage 3 of the TdS in Toblach, Italy. (Photo: NordicFocus)

Rosie Brennan continues her top-10 drive during Stage 3 of the TdS. (Photo: NordicFocus)

“I am very happy with my race today,” Brennan emailed. “I have some big goals riding on this tour and while I didn’t have my worst races that last two days, they were quite what I dreamed of. Today was much more what I had in mind. I love individual races and knew I had to make the most of the one intervals start race in the tour. I had a strong first lap and faded a bit more than I wanted the second lap but am happy with an improved result. Tomorrow will be a fun day as I get to ski with my favorite training partner, Sadie!” 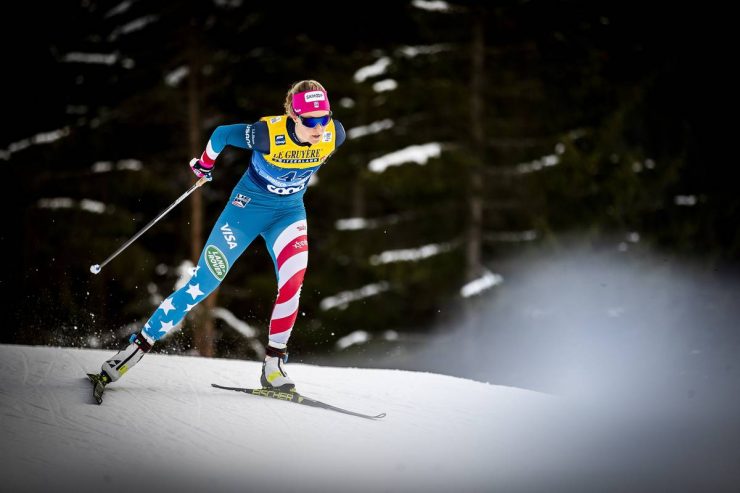 Sadie Maubet Bjornsen during Stage 3 of the TdS in Toblach, Italy. (Photo: NordicFocus)

“Another exciting day of racing in stage 3,” Maubet Bjornsen emailed several outlets.  “I woke up feeling recovered and refreshed, so I was really excited for today. We have raced three skate races in a row now, so our skating muscles are getting pretty tired, but every time things are tough in the tour, I just remind myself that everyone is in the same boat! I was really happy to finish 8th today, and I feel like I am in a great place for the pursuit classic race tomorrow. Rosie, Jessie and I are all starting close enough together that we can make an American train, and take on “the world” together. We are still trying to dig ourselves out of a hole in the “overall standings” from the stage 1 waxing mistake, but every day, we are chipping away little by little… which is the key to this tour. I can’t wait to put some classic skis on my feet tomorrow, and see what I can do!”

Outside the top-10, the U.S. had an astounding day. Sophie Caldwell, currently the fourth-ranked sprinter on the World Cup, raced to 25th (+1:25.9). According to FIS, this is Caldwell’s third time in the top-30 for a World Cup distance event and her first in skate. 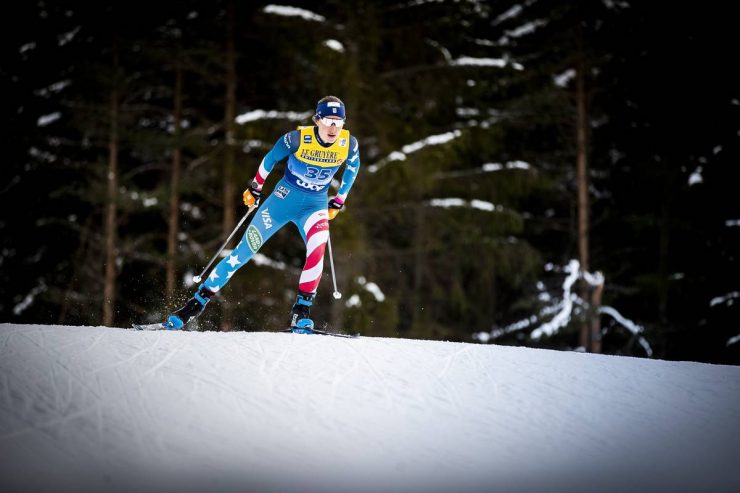 Sophie Caldwell primed for distance racing and in the points during Stage 3 of the TdS. (Photo: NordicFocus)

Racing continues tomorrow for the women with a 10 k classic pursuit. Start positions and time back are based on today’s results, not time back in the overall standings. For example, Johaug will start first, Østberg second (+0.1) — times are rounded — and Diggins seventh (+0:36). This should make for a tighter and more exciting TdS pursuit at a time when overall time gaps can make head-to-head racing less likely. 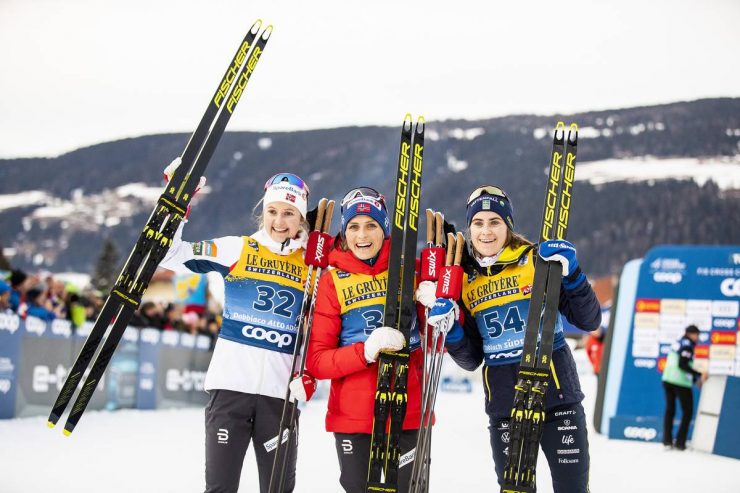