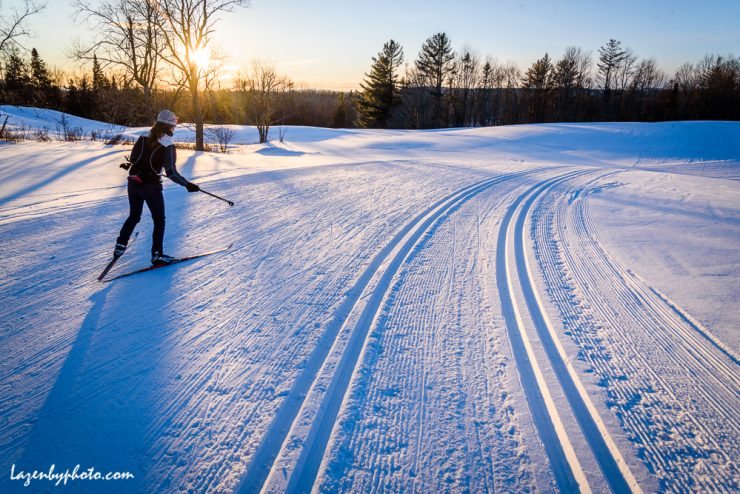 As the sun set, it was so cold that the battery in my camera froze into a non-working lump during this late afternoon masters’ training session at Craftsbury Outdoor Center last January. But the masters kept skating in the cold, squeaky snow and I was able to get this image before the battery went dead.

Craftsbury’s homegrown professional ski and biathlon teams race as the CGRP – or the Craftsbury Green Racing Project. The “Green” reflects the team’s Vermont based Green Mountain roots and promotes the underlying ethos of the COC: environmental stewardship.

“Moving away from a reliance on fluorocarbons would, in the Outdoor Center’s view, be a good move for peoples’ health, the environment, and the sport as a whole,” states Craftsbury’s policy. The policy posted on the COC website goes on to link a 2013 study about bio-accumulation of PFAS in wax techs and a recent piece on PFAS bio-accumulation in the food chain near a nordic ski area in Trondheim, Norway.

Craftsbury’s new fluoro policy is lean with its verbiage. Yet with two sparse sentences, Craftsbury cast a wide net.

“As it stands right now, we see no need for skiers to wax with fluorocarbons for day-to-day skiing at the Outdoor Center. Furthermore, the use of fluorocarbons will not be permitted in our public wax room at any time,” reads COC’s no fluoro policy.

Ollie Burruss, a do-it-all spark plug at Craftsbury, said the policy is really a work in progress. Not all skiers are coming to conversation with the same level of understanding or awareness when it comes to perfluoro wax use.

“The thing that is going to be difficult about the policy is understanding what is fluorocarbon,” said Burruss. “Burning fluorocarbons in a hydrocarbon chain in a paraffin wax is not nearly as alarming, in my opinion. And from what I have read, it seems the research bears this out a little bit more, it is not as alarming as what we consider to be the perfluoro topcoats.”

Burruss understands the on-snow wax policy is a suggestion, not an absolute and enforceable mandate. The wax room policy, as it reads and as Burruss confirmed, is absolute. Craftsbury would prefer that skiers not apply LF or HF paraffins or “burn” top coat products in liquid, block, or powder form.

“This is us saying we know that it is a public health issue, and it is unrealistic to expect everyone in the wax room to mask-up when one person decides to burn powders so let’s just not do that anymore,” said Burruss.

That zero tolerance comes with a caveat. Some skiers do not perceive LF and powders as equals when it comes to exposure in the wax room.

“Those using LF paraffin, we’ll need to educate them about why we don’t want to do that,” continued Burruss. “If it turns out someone is in there and burning a LF paraffin, then you can say this is an educational opportunity to explain why we want to try and move away from these products. We need to be educating people as we are trying to create these regulations and policies. The skier that goes in there, and hopefully this does not happen as we are really going to make a concerted effort with signage, we don’t anybody going in there and burning powder.”

The public wax room at Craftsbury does not offer individual venting stations. Skiers ironing in powders, for example, impact the wax room’s “shared air”, said Burruss. “So if one person decides to burn a powder then everybody is exposed and we don’t think that is tenable.”

Craftsbury’s approach to determining how to regulate fluoros remains cautious. They will continue to modify and implement the policy with an eye towards educating visitors.

Burruss was also involved with crafting NENSA’s new wax regulations. Burruss said the working group tasked with formulating the rules kept the realities of age-group racing in mind. “We asked when would it be appropriate for wax techs to bring the full scope of their waxing knowledge? Maybe at some levels, it is not entirely necessary,” said Burress.

NENSA’s Competitive Program Director, Justin Beckwith, explained the group had been debating a tiered fluoro use protocol for several months. “It started within our staff, then we brought in our athletic development committee, which represents coaches from — we have an EISA coach on there, we have high school coaches on there, we have club coaches on there. So a pretty robust discussion with that group,” said Beckwith.

Some of the policy’s key wax guidelines break down like this.

“We’ve never had a true wax policy or protocol, so several nice steps forward and keeping in pace with what we see coming down the line where there’s going to be measured steps by organizations and how they’re going to react to it,” said Beckwith. “We’re on our way to the brave new fluoro free world.” 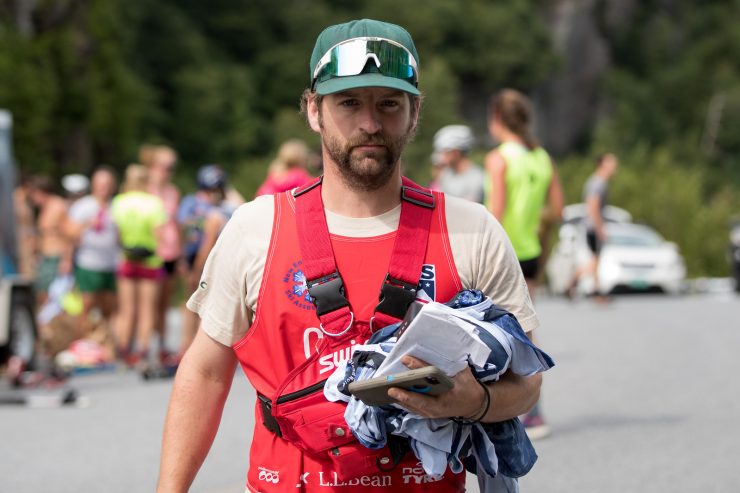 Beckwith understands that the marketplace will morph as more PFAS regulations are enacted. Organizers at all levels of racing, from the World Cup down, are thinking about how to enforce fluoro-restrictions. But like Craftsbury, it makes sense for NENSA to begin the process of formulating wax rules now and prevent itself from responding willy-nilly in the future.

“We really want to get people thinking about skiing and not thinking about waxing,” claimed Beckwith. “We’ve also been pushing the education piece of it. … I don’t think hysteria is too strong of a word — there’s a little bit of hysteria around this waxing issue, and the reality is that it’s not only that you’re going to spend more time with your athletes on race day, but you’re going to produce better skis if you’re doing things ahead of time and not spending a ton of time on the day of the race trying to find the latest and greatest thing.”

The NENSA policy comes with a holistic mission statement acknowledging the health and environmental risk of some wax products, and the need to address a perception that absent a wax protocol, some athletes benefit more than others.

The new policies, as Beckwith stated, are based on trust.