Meeting centered on inclusion and structure 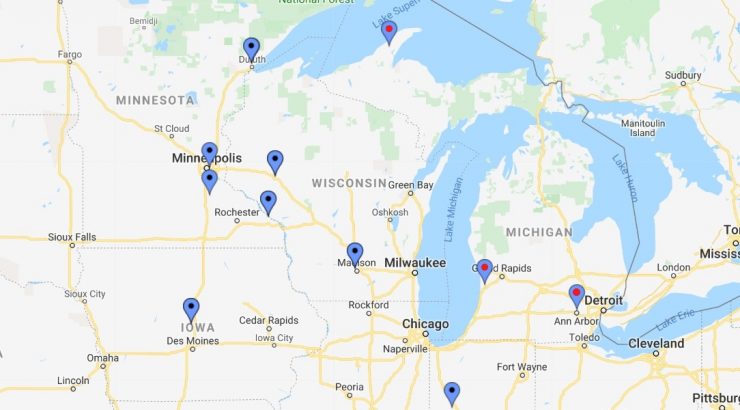 A map of teams in attendance (black filled pins) and teams calling in to the MCSA meeting October 27. (Map by Drew Birschbach)

On a conference call, USCSA Executive Director Alec Tandara-Kuhns and USCSA’s Rocky Mountain Conference Nordic Coordinator Christi Boggs were there to add important insights into the process of organizing a league.

Of the teams in physical and remote attendance, returning MCSA members Saint Olaf College, represented by Coach Kevin Brochman, and University of Michigan, represented via phone by Lars Hallstrom, joined new members around a ring of desks in a Stout board room.

It was not an easy road to get to this board room. Accommodating the academic and training schedules of college students and long travel times from schools as close as University of Wisconsin Eau Claire and University of Minnesota Twin Cities and as far as Iowa State University and Purdue University. Through the hard work of the MCSA leadership, they were able to find a time and a place that would work for 11 teams to field representatives and three other teams to call in.

That great turnout made perfect grounds for setting a base for what this new era of the MCSA will look like. 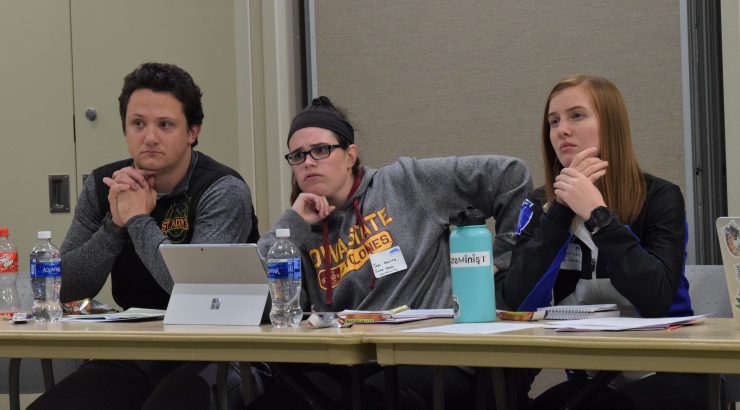 This renewed competitive conference will be one that member teams and MCSA leadership hope will give a new generation of high school skiers from the Midwest an opportunity to race outside of established NCAA ski leagues. Additionally, the MCSA intends to foster more team interactions

throughout the season through more college-centric racing, creating new connections and deepening existing relationships between all member teams.

Theyerl said that, as a leading part of the MCSA, he’d “love to give high school skiers an opportunity” to graduate to college having the ability to ski and race at a competitive level through the MCSA initiative. His previous experience as President of the Wisconsin Nordic Ski League will surely help the growth of the conference during this rebuilding phase.

Pushing forward into the future requires a respect for the past, something Petersen was particularly well-suited to explain to the round table of fresh new teams. Having founded the Midwest Ski Association in 1973, Petersen soon began to develop and grow that league until contact with teams outside the league led to their first national championships and the creation of the National Collegiate Ski Association. Soon the name changed to today’s USCSA, Petersen left the president and director roles to focus on his personal life, and the USCSA grew to include alpine and snowboarding. Petersen’s return to the USCSA this Spring was one of the major factors leading to the meeting at Stout.

The teams in attendance worked diligently to put together a race schedule to lead up to the MCSA Regional Meet, a tough task in October for teams that have traditions of hitting specific citizen races and plans already in place for lodging.

Transportation was another concern of teams, but a general solution used by MCSA Alpine was splitting into divisions. The divisions haven’t been finalized by MCSA Nordic, but should help create more compatible schedules. Qualification for Nationals will still fall under the mantle of the Midwest Conference, but these divisions will allow smaller groups of teams to meet at races like the Noquemanon and the annual College of Saint Benedict/Saint John’s University ski meet before the two divisions meet at Regionals.

As part of the October 27 proceedings, USCSA welcomed input from the American Birkebeiner Ski Foundation (ABSF) and the Loppet Foundation.

“We have a really large interest in investing in the sport,” said Ben Popp, ABSF Executive Director.

He laid out the chances for ABSF to coordinate with the MCSA on team registration for future years of the American Birkebeiner and the possibility of adding other events outside of Birkie Weekend to future MCSA race circuits, such as the Hayward Dash. He also spoke to the unique culture of Midwestern skiing. This culture has a rich history of citizen races including the Mora Vasaloppet, Noquemanon and the Great Bear Chase.

The Loppet Foundation’s Heidi Ledermann, a Saint Mary’s University alum and liaison for the FIS World Cup events, pitched the opportunity for MCSA athletes to add some of their Fastenal Parallel 45 Cup events to the race circuits as well, and to encourage all the athletes to attend the World Cup Sprint Finals in Minneapolis, Minnesota this March.

With the work already done by many student skiers so far and the support provided by the USCSA and organizations like ABSF and the Loppet Foundation, a bright, new chapter for the MCSA is ready to be written.

University of Michigan (by phone)