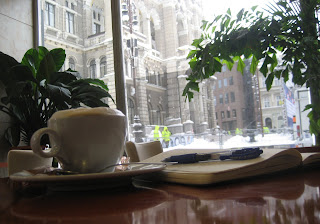 In the Piazzo d’Oro cafe on the edge of the Liberec town plaza the overlaying of Eastern European history and the lycra-clad world of skiing makes an odd juxtaposition. Directly outside my cafe window looms the elaborate stone facade of the Liberec town hall, built in 1888-93. As my gaze travels from the copper spires, green with time, down to street level, the current World Championship event demands acknowledgement. A large “Liberec 2009” banner plasters a short temporary fence in front of the building and neon-coated security guards stand in pairs shifting their weight from foot to foot and taking purposeless steps.

Slightly out of view to my right is a large screen showing the day’s events in real-time. Green plants, feeling defected about the persistent snow and mythical sun, obscure my view of the temporary stage where they award the coveted FIS snowflakes. I don’t need to see it to be reminded of all it represents– the years of training, broken down into months, weeks, hours, and minutes of our lives dedicated to a pursuit and a passion that’s difficult to justify.

Further down the plaza is a temporary building housing the official “Liberec 2009” merchandise, chintzy hats and t-shirts using the World Champs to promote the city of Liberec. A trail of booths selling souvenirs, food, and booze stretch optimistically down the streets hoping to lure tourist and czech alike into pausing and purchasing en route from the city’s main bus stop to the plaza. I shouldered my way through the crowds the other night, peering into booths and enjoying the festival atmosphere with my teammates as the slush soaked into our shoes but it’s a Sunday morning now and the plaza is quiet. Most good czechs are in church or, more probably, sleeping off Saturday night’s indulgences in the cheap and renowned czech pilsner.

Many of the pedestrians outside my window are associated with the World Champs, identifiable by team jackets, hats, and that look by which skiers can recognize each other. Like me, they’re seeing what Liberec has to offer aside from ski trails and jumping hills. I have to wonder to what life they’ll be returning after the championships are over. Different norms and mores back home, different motivations, languages, but we still end up at the same ski race and have a shared experience.

Tomorrow I’ll be back at the venue, testing skis, coaxing the muscles into firing, and finishing the final preparations for the skate sprints on Tuesday but today I’m taking a break from the streets defined by wax trailers and ski trails outlined in v-boards, letting the body rest, letting the mind wander.