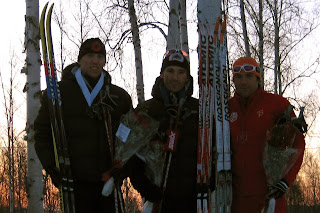 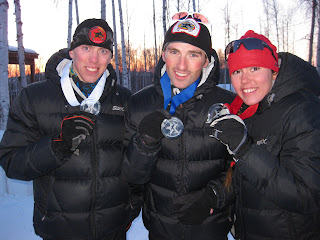 Last night I got my first National Championship since 2006! I knew when I won my last one that any win could be your last so to get back on top after a rough couple years feels super good.

I was the 4th starter in the “A” seed so I knew that there were a lot of fast guys behind me so there wouldn’t be much information to get from the time checks out there. I just had to ski as fast as possible and hope my time would hold up. After I finished I heard how many guys were not far back after the halfway and I started to get real nervous, even a little queasy. Finally I heard the announcement that I was the National Champ and it was all smiles!
This past week I have been really nervous about this first race because my body has felt awful. Just sluggish and tired since last Sunday… Finally after a few days up here with some tune up workouts and some solid couch time my body finally started to come around the morning of the race. Still I had no idea if I would be able to ski fast or not. Out on the course I had no clue what I had, I was just going as fast as I could with what my body could do. Fortunately it was enough.
Yesterday was a sweet day for APU with 3 on the National Championship podium. Becca Rorbaugh, 2nd US and Brent Knight, 3rd US. First time on the podium for both of them.
Now it’s a couple days recovery and get ready for Friday nights pursuit.