In my Rogers Park Elementary School class the students were working on statistics this winter. I was away racing, but I keep in touch with Ms. Price & suggested that they do a project looking at the statistics section of the FIS website. FIS does a great job of providing not only individual bios and career histories but also cumulative information. When I returned from Canadian Nationals and got back into going to math class they showed me their projects and we did a group discussion/critique.

Here’s a sampling of their work…

(and yes, I can tell that I’m becoming more teacher-esque because I brag to my friends about how brilliant “my” kids are.! 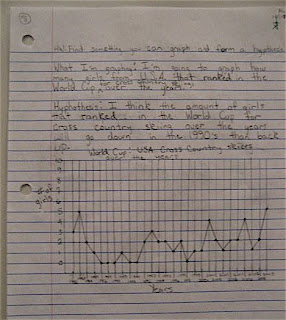 “What I’m graphing: I’m going to graph how many girls from USA ranked in the World Cup for cross country skiing over the years.”
I think that this is specifically number of American females who made it into the top 100 of the FIS points list, covering 1982-2009. I think that this trend looks encouraging… moving upwards! 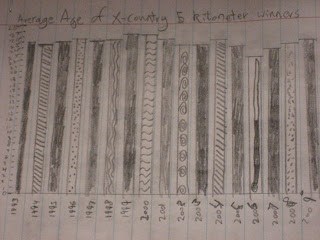 “Average Age of Cross Country 5k Winners”
This, in addition to being a visually appealing graph, shows that the average age doesn’t vary too much, mostly being about 25 years old. 1983 is at the far left and the data continues through 2009. 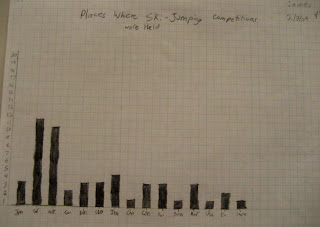 “Places Where Ski Jumping Competitions Were Held”
Germany & Austria held way more World Cup ski jumping comps this season with 11 & 10, respectively. It was pretty clear when we were in Austria that they had a strong culture of skiing with ski areas and trails all over the mountains. It would be interesting to look at how the number of World Cup competitions held in an area affects the development and success of that sport in the area. 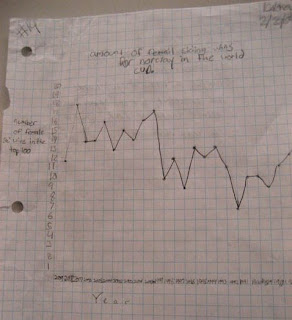 “Amount of Female Skiing Wins for Norway in the World Cup”
Be careful, the years run from 2009 at the left of the graph to 1982 (I think) at the right side of the graph. So it looks like Norwegian women are increasing their dominance, albeit with a sharp drop off from last year to this season… looks like the Norwegian team missed having Astrid on the world cup this year. It is worth considering that the number of races and hence overall number of wins available in a season might have changed over the years. A more consistent stat would have been percentage of races won by Norwegian women. 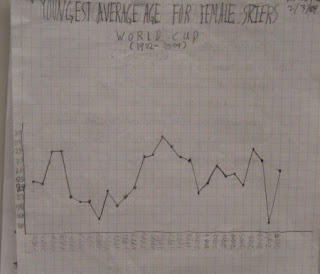 “Youngest Average Age For Female Skiers: World Cup 1982-2009”
From which I would surmise that there’s no noticeable trend in the age at which the youngest females are winning world cups. I think this is the average of youngest 5k winner, youngest 30k winner, and so on over the season.

I always do feel grateful that I get to work with such wonderful students and that I can help spark their interest in math & skiing! 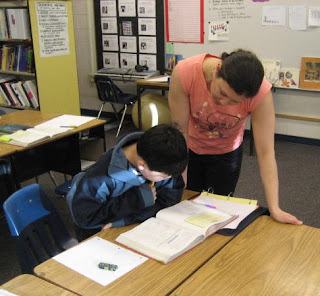 Some pics from Falun...