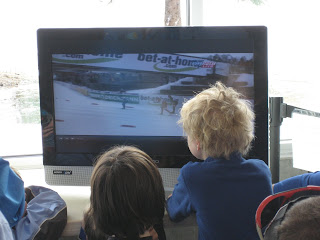 On Saturday some of the elite skiers who were in Anchorage coached at a youth ski clinic at the Hilltop Ski Area sponsored mainly by the Asthma and Allergy Foundation of America, Alaska Chapter, as a vehicle to educate young athletes about, as you probably guessed, asthma and related issues. 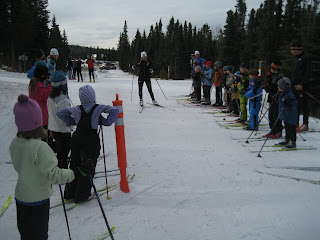 We broke into small groups to ski with and talk to the kids and then reconvened as a large group for some obstacle course competitions and a game of speedball. Above, Kristina Strandberg demonstrates some skating technique. 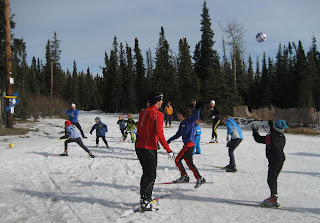 Speedball is one of the standard ski-games. For this game we had two soccer balls, one ski per skier, and no poles. This set of equipment minimizes the severity of the inevitable collisions. It’s a melding of ultimate frisbee and soccer– you can either dribble or throw but not run with the ball. Then again, as far as rules go it’s the kind of game where rules can change on a whim. 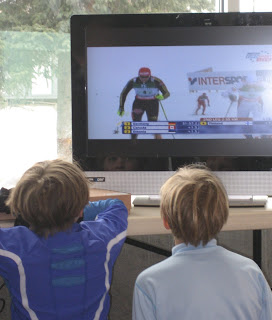 There was also race video from the World Champs playing and we signed posters for the kids. It was really fun to see how excited the kids were about skiing and how engrossed they got in the race video. Are these kids going to take home these posters, hang them up, look at them, think about skiing, start identifying as a skier, and become a skier? I don’t know. It’s certainly possible. I could see that possibility at the clinic. I could see that seed being planted and that the kids thought that being a skier was something super cool.