Roberto Carcelen is a member of the Peruvian National Team.  In fact, for all intents and purposes, Carcelen is the Peruvian National Team.  I first met Roberto on a bus ride home from the venue at the World Championships in Liberec, Czech Republic last winter.  He’s one of the few other skiers out on the trails here in Silver Star and we had a chance to catch up during a ski this afternoon. 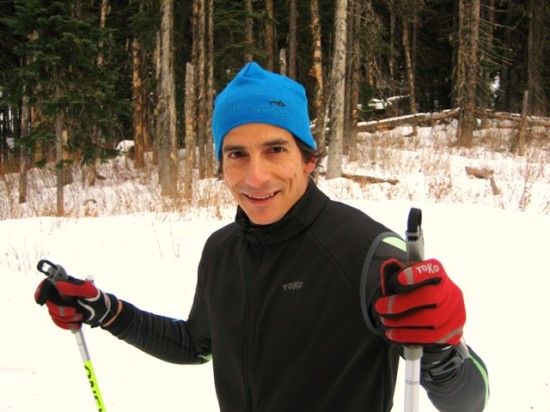 Like us, Roberto is out on the trail testing his new fleet and getting some valuable time on snow at altitude.  If he toes the line in Vancouver this February, he will be the first Peruvian to compete in the Winter Olympics, ever.  He’s here with his wife and their two-year old daughter training for the week.  (MaryBeth, I’ve been trying to convince Matt that he needs to bring you and the kids out here next time!).  They actually live in Seattle and Roberto does most of his skiing up in the Methow Valley.  Gotta say, I was pretty impressed by how well Roberto was skiing this afternoon.  He says he does a lot of his training down in the Andes running on the Inca Trail to Machu Picchu, where he operates his business Inca Runners.  He’ll be joining us on our intervals tomorrow.  It’ll be exciting to follow his progress, along with all of Peru, during the coming winter.