Just finished the last weekend of racing on the fall tour.  The week in Canmore has been solid and relatively uneventful.  The organizers built a new classic sprint course to deter double-poling on skate skis.  They added two solid climbs which improved it significantly.  Speaking of improved, the Canadians skied strong this weekend on their home course.  We skied two classic sprints on the same course, mostly as prep for the February World Cup here as well.  The double-weekend felt a bit like Groundhog Day, with Sunday being virtually identical to Saturday.  In fact, in addition to wake-up and departure times, my race times were almost identical.  I finished the qualifier in 7th place, 7 seconds out of first both days.

We planned long ago for me to ski one qualifier here and one full day with heats.  I sat out yesterdays heats, but jumped in them today.  Sprint days are always long and can be very challenging.  Today, I was on skis from 9am – 3:00pm with a one hour break after the qualifier in the morning.  However, that’s nothing compared to the coaches who were up at 4:45 this morning to get out on the trail and test wax.  Thanks to Abi and Pete for their hard work and fast skis this weekend.  A Chinook (not to be confused with a Canuck) blew through Canmore Friday and we enjoyed moderate temperatures in the 30’s all weekend.

My camera’s had too many days outside in the cold weather and, unfortunately, stopped working this week.  Canmore’s probably the worst place to have your camera stop working because it’s such a beautiful place.  I’ll sign off with a couple shots from the Canmore World Cup in 2008: 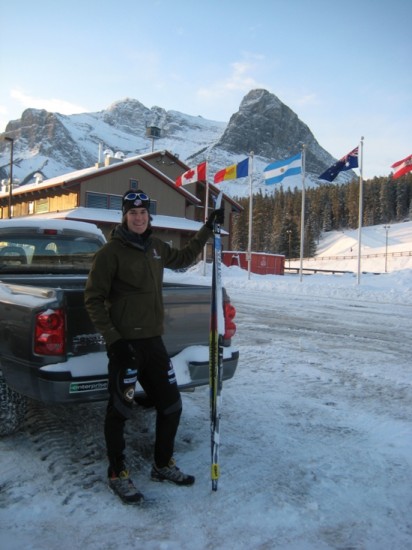 Signing off for the next week or so.  No internet at home (seriously).  Check back in after December 28 for updates from the National Championships in Anchorage, Alaska.  Thanks for following along this fall!  See ya, Kuz.

heading home for the holidays