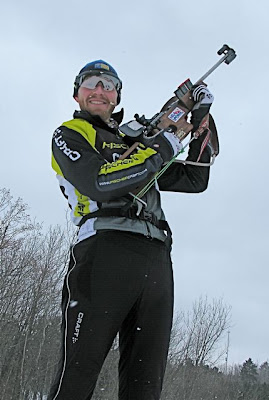 That is the answer to the question, suggestion, encouragement to one “Chambo” to try Biathlon out.
I have been following Chambo since his college days where he was tearing up the tracks as a collegiate skier when I was coaching at St Lawrence. Later racing against him over the years.
It is too bad that he has not trained for Biathlon these past years.
Biathlon is an addictive sport. Very humiliating also. One can wonder why extremely talented skiers such as Lars Berger, and Ronny Hasfas compete in Biathlon where they constantly get punished with penalty loops when they will for sure have a chance of a podium in a “Special Race”.
As Josh Thompson would say: “Biathlon is a sport where you have to be smart enough to figure it out and STUPID enough to keep doing it”
Maybe I do not like Chambo and want to watch him to suffer painfully doing Biathlon.
No actually, Chambo would be a kick ass biathlete. He is fast strong skier.. His Wife, Beth Ann is a National Class Biathlete and he still has many good years of skiing in him.
As has been demonstrated a Biathlete can do well in a ski race, but a Skier would have a hard time excelling in a Biathlon Competition.
Hopefully he will take the plunge.