The Susitna 100 is a 100-mile run, ski, or bike race in Alaska, following a portion of the Iditarod trail. You are required to have 15 pounds of gear with you at all times, not including consumable food and 2 liters of water. If you pull a sled, that weight doesn’t count either. The trail is ungroomed by nordic standards, and is oftentimes only one snowmobile width across. A skier can expect uneven terrain, small burms, and varying snow conditions. With the advent of the fat-tired bicycle, bikers are able to ride through even softer snow than ever before. In hard conditions a bike will beat skis, but when things start getting soft (new snow ro warm temps.) the bikes start digging in while skis can still glide across. This race is a combination of fitness, conditions, and equipment. This year was an exceptionally close race.

A week prior, I had held a waxing clinic specifically for this type of race. The focus for waxing is durability and varying snow conditions and temperatures. Temps. can vary from 0-30F during the race, and snow can vary from churned up and dirty to fresh powder to wind-blown semi-crust- all in one day!

This year, despite unseasonably warm temps (20-30F), I stuck with the tried and true- HF blue (thermobagged), LF Moly lightly brushed (for the dirty parts), HF blue covered with Jetstream blue (ironed) and Jetstream blue (rotocorked). It’s hard to convince people (sometimes even myself) to wax this hard for such warm temps., but for this long of a race durable skis will beat out skis that are slightly faster in the beginning. 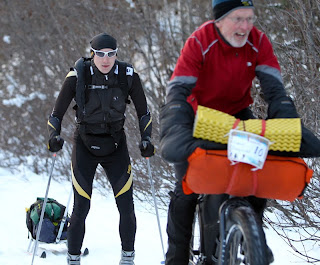 This year started off rough- still fighting a head cold and rolling my sled 3 times in the first 5 miles- setting me behind all the other skiers and quite a few bikers on the narrow trails. By the first checkpointat 22 miles, the lead bikers were barely in sight and heading toward firmer, more heavily traveled snowmobile routes. Heading up 15 miles of the Susitna and Yentna Rivers, I could catch glimpses of the bikes still 15-20 minutes ahead. As we headed north and left the rivers toward the turnaround checkpoint, the snow got a little deeper and I was able to slowly reel the bikes in. The snow that fell the week prior must have been dry, because despite the warm temps. it was a little squeaky and sandy (soft) feeling. It took about 50 miles to catch up with the lead bikes and take the front.

Here’s where strategy comes in: gain as much lead as you can while the conditions favor you without over-doing it and running out of energy. With a tailwind and heading downriver on the return, I was able to keep an 8-9 minute lead on the bikes as I headed to the last checkpoint (mile 85). With about 1 mile of (bike-pushing) soft trail on a lake before the final 14 miles of (bike-favorable and firm) snowmobile highway before the finish, I made my escape across the lake, and pushed it hard to the finish trying to keep their headlamps out of sight.

Hamilton Gives Glimpse of the Future in Men's Sprint