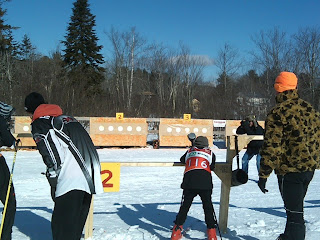 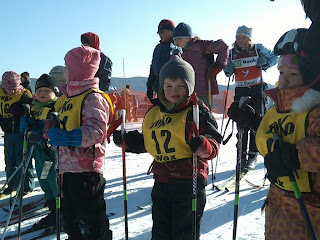 This past weekend the Paintball Biathlon was held at Mt Top Inn and Resort in Chittenden, Vermont. It was the fifth year. On Saturday adult and High School divisions were run. On Sunday, Lollipop, 1st and 2nd Grade, 3rd and 4th Grade, 5th and 6th Grand and 7th and 8th Graders skied and shot. There were a total of 367 were pre-registered participants.
Combining paintball with skiing brings together a great diversity of talnts and interests. Folks who had not skied much, but who liked shooting paintballs, were ready to give skiing a shot. People who had not done much paintball shooting, but had done a fair amount of skiing, wanted to give shooting a try. Talented skiers could get humbled in the range. Talented shooters could make up some serious time on the others. (We deduct time for hits.) The winner of the 7th and 8th grade race was decided by one shot on the range.
There was a great core group of organizers and a terrific group of community volunteers. Tippmann Paintball Company has been a great sponsor of equipment. And Toko has consistently donated raffle prizes.
Smiles were not in short supply — Except when the folks in the range realized that 3,000 paintballs were shot during morning practice sessions, and some quick number crunching was needed to see if someone needed to run to a paintball supply store FAST! Luckily, there were enough.