A few days ago I was planning to post about how great it was to be following the Olympics from Sweden. We are 7 hours ahead of Vancouver, so everything xc ski race is live in the evening, from around 5 P.M. to 11 P.M. No commercials and complete start-to-finish video feed. Multiple channels, so if an important Swedish curling match is on one channel, the other is free to broadcast more nordic skiing. Could it get any better than this? 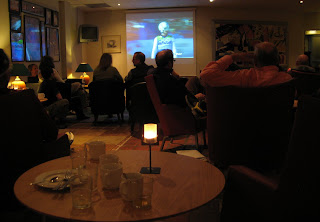 And then I tried to find the Nordic Combined team relay. Sweden did not field a team. There was no coverage to be found. I have read about the US/Austria battle in the final lap, but have yet to see it.

That aside, it is such a pleasure to watch the nordic races on TV here. After dinner, a large group of masters skiers in Falun for the Masters World Cup gather around the large screen TV in the bar to watch the Olympic racers do their thing. Per Elofsson, a former World Cup sensation from Sweden, provides expert commentary. Before the race, there is a significant amount of time spent discussing what we will see, and who the favorites are. After the race, there is video replay and analysis of crucial moves, missed opportunities and comparison of fast skis, etc. Pretty much like watching a NFL football weekend. But with skiing. And no lite beer commercials. Or any commercials. 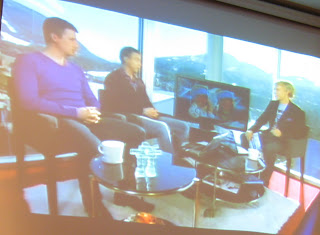 Per Elofsson, far left, offers nightly commentary.
At the grocery checkout line Sunday, all the newspapers had front page photos of Swedish nordic ski racers. Think we will ever be able to say that in the US? 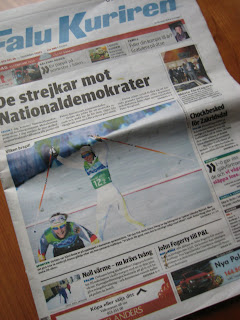 At dinner a few nights ago, amidst general praise for the Olympic TV coverage here, one person said that as far as they could tell from watching Swedish TV, there was no longer any ice skating at the Olympics. Just day after day of skiing. To Americans who had come to Sweden to race on skis, that sounded pretty good.