Word on the street is that today’s 4 x 10km relay will be broadcast tonight on NBC in Prime Time.  This doesn’t happen often for cross country, so be sure to tune in.  Our relay team was made final at the last minute with our two distance skiers feeling a little under the weather this week.  We had a solid group of sprinters on our team that had the potential to take gold if we were racing a 4 x 1.5km relay.  As it was, we were a little further back, but had a lot of fun out racing. 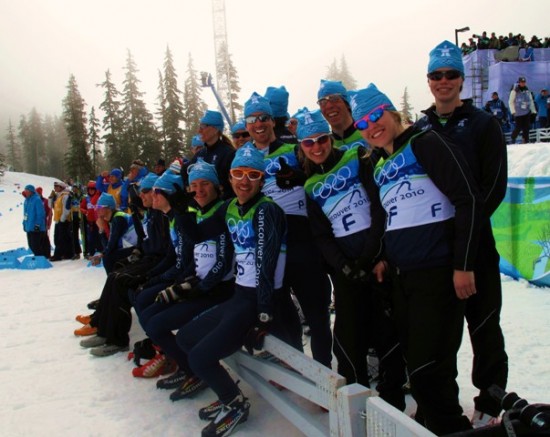 The forerunners had their work cut out for them today and skied almost constantly around the course in small teams in front of the leaders, making sure the snow was out of the track for the racers coming through.  They were a little extra motivated as the Canadians had a strong start in their classic legs.  Andy Newell kicked off the race for our team.  He said the pack took things out pretty slow and he was able to maintain contact with the lead pack for the majority of his leg.

Some of the biggest snowflakes I’ve ever seen started falling during the 2nd leg of the relay when Torin got the tag from Andy.  Andy and Torin both skied on “Zero” skis (best at Zero degrees Celsius when the precipitation is between snow and rain) with a synthetic cork and rubber base in the kick zone, which offered the best kick and glide during the race.  Torin made a valiant effort to catch up to the Kazakh and Russian teams, but eventually paid dearly for the effort and lost a bit of time on his final lap.

I got the tag from Torin who came in with an Estonian skier.  The Estonian took off like a rocket from the start.  I figured he’d either catch up to the group in front of us (not likely) or he’d blow up and I’d catch him (very likely).  Sure enough, around 5km into my 10km leg I caught him.  I sat in and drafted him for a little bit, but he was skiing pretty slow.  I took the lead and made a hard pull to make up some ground on the guys in front of us.  While I wasn’t able make up a lot of time, I did maintain the pace and tagged off to Simi right with the Estonian. 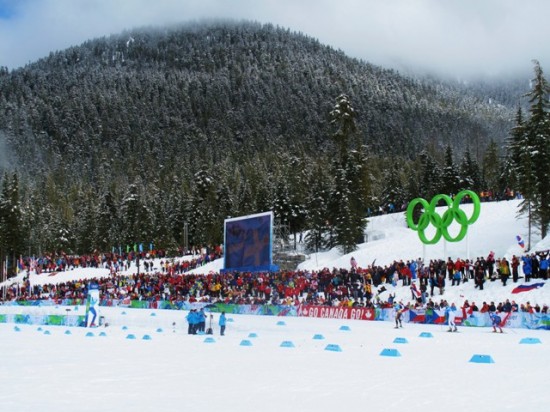 Simi skied a smart race.  The gap was too large for him to make up time on the next pack, so he sat behind the Estonian and got in a good draft.  Sim’s skis were blazing fast and he was able to stand up and rest behind on the descents.  Finally, sprinter Simi put the hammer down going up the final climb and came into the stadium with a comfortable lead.  It definitely wasn’t the final result we were hoping for, but we had a good battle out on the trail and had a lot of fun. 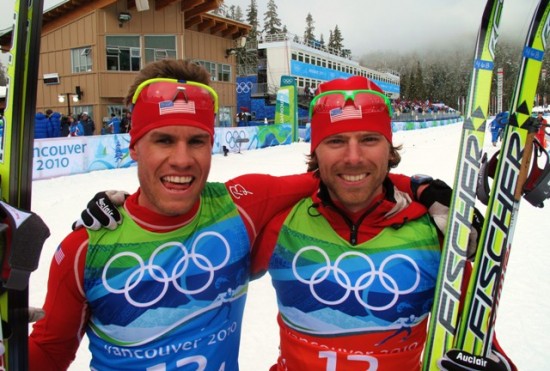 Simi and Andy, all smiles at the finish line.  We’re definitely looking forward to seeing the next generation of skiers (or ourselves) battling with the leaders in the next 4 x 10.  The US cross country program is definitely stronger than we’ve showed at these Games, but I’m confident we’re taking the right steps.  We need the US junior programs to continue working hard and the elite and masters skiers to continue to provide support and coaching for the younger generations.  I’m looking forward to watching the United States win the gold medal in this event and I think it’s going to come sooner than later. 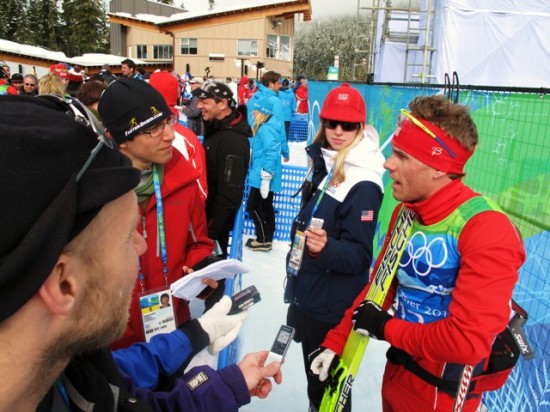 Simi in the “Mixed Zone” fielding questions from the press after the race.  I’m now finished with my racing at the Games.  I’m looking forward to getting into Whistler and taking in some of the festivities, as well as watching more events during the final days of the Olympics.  It’s been a great experience.

Alaska Girls are here in force!