I arrived in Vancouver for the first time this season on November 1, 2009—barely three months ago.  My arrival was completely uneventful and anonymous, getting off the plane, picking up my duffel and ski bag, and walking through customs.  That trip was spontaneous and a big risk, taking my chances that there was going to be enough snow to ski in Silver Star and get a couple of weeks on snow before the start to the racing season.  I exited the Vancouver airport and took the subway, ski bags and all, to the Greyhound station, where I took the 6 hour bus ride from Vancouver to Kelowna, BC.  My teammate Matt Liebsch and I met up in Kelowna and spent the night at the youth hostel in Silver Star, before clipping into our skis for the first time of the year the next morning.

About the only thing similar between my Vancouver arrival last November and my arrival yesterday was the total lack of snow on the ground.  Besides that, the story couldn’t be more different.

The 2010 US Olympic Cross Country team arrived in Vancouver yesterday afternoon, on Tuesday, February 9.  We had a short, direct flight from our pre-Olympic World Cup races and training camp in Canmore, Alberta.  We flew with the Swiss Alpine Team and the Dutch Speed Skaters and received an ovation from the passengers when the pilot announced our presence.  At the gate in Vancouver, we were met by several delegates from the United States Olympic Committee (USOC) and didn’t even need to go through customs, as we were on a domestic flight within Canada.  Immediately, we were handed our temporary IDs and got a team photograph with the Air Canada staff. 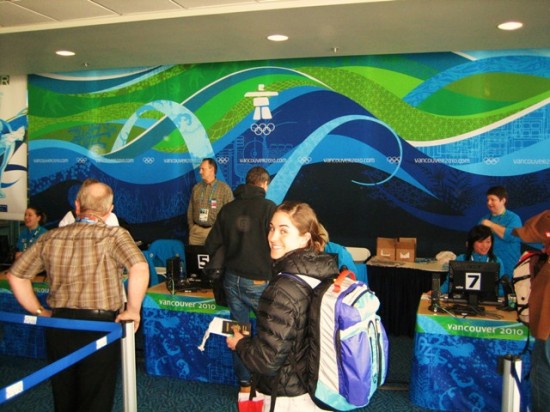 The Olympic experience really set in for me when I traded my temporary ID for my Olympic credential: “Athlete.”  Sweet!  At the baggage claim, the only thing I had to do was take my bag off the carrousel before my bag was taken from me, tagged, and send immediately to our hotel.  We sent our skis last weekend directly from Canmore so we would have less gear to travel with in Vancouver. 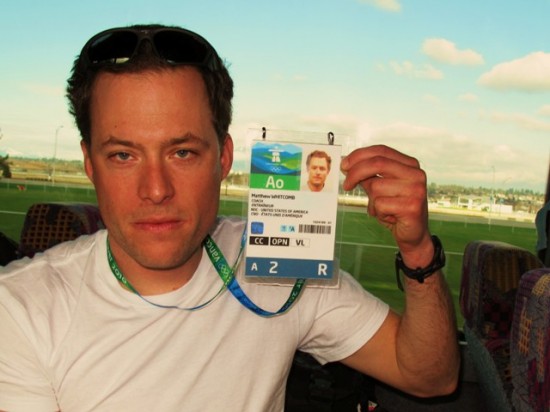 as matt whitcomb demonstrates: no smile, no teeth for credential photos. 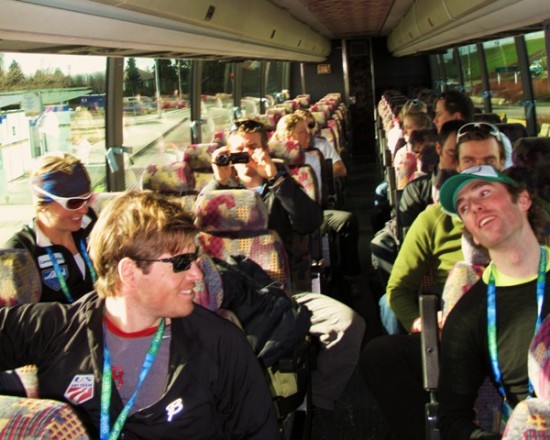 We spent our first 24 hours of the Games in Vancouver, getting many of our obligations out of the way.  The first thing we did after arriving in our Vancouver hotel was what many people probably find the most exciting: processing.  Processing was best described to me by one of the volunteers as, “Christmas shopping without a credit card.” 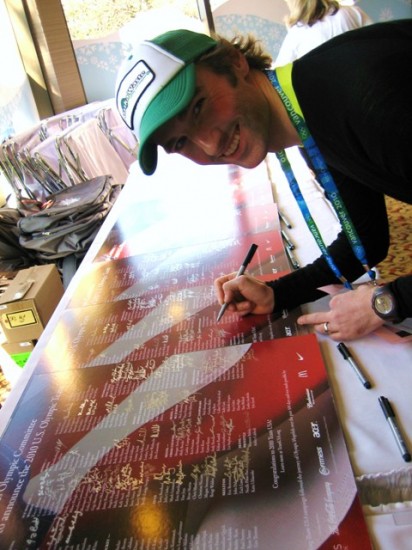 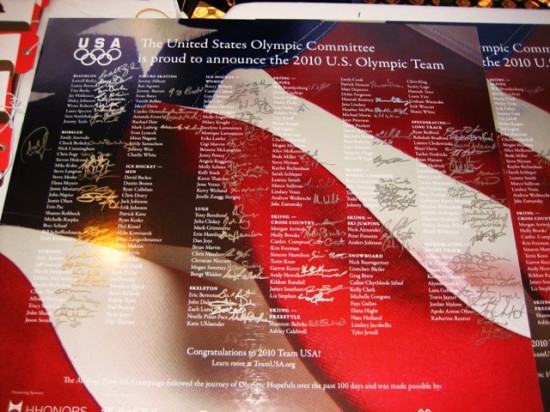 Each athlete went through a series of small rooms, getting photos taken and picking out our Team USA gear.  Our Team sponsors this year are Nike and Ralph Lauren.  Sweet!  We each got a clipboard with a  checklist and went around the room getting checked off for each piece of merchandise we were set to receive, including Opening, Closing, and Podium Ceremonies gear.  No sense describing all the swag, you’ll get a chance to see us sporting most of it in upcoming photos! 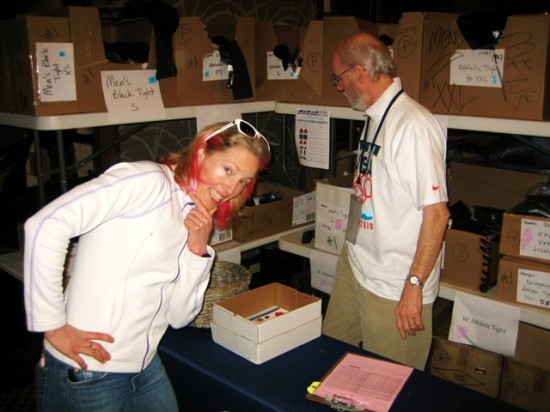 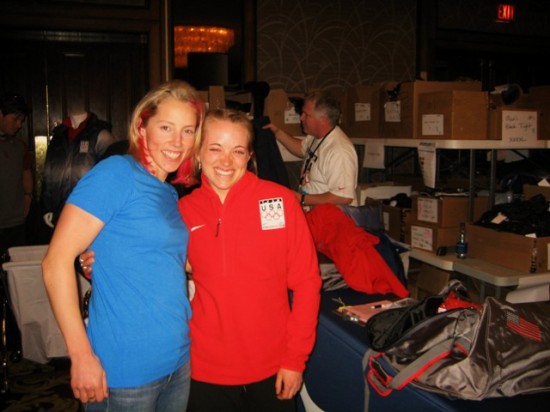 After a quick trip to the tailor from Ralph Lauren, where we were shown exactly how to wear our new duds and some team photographs, we got some well needed time to relax. 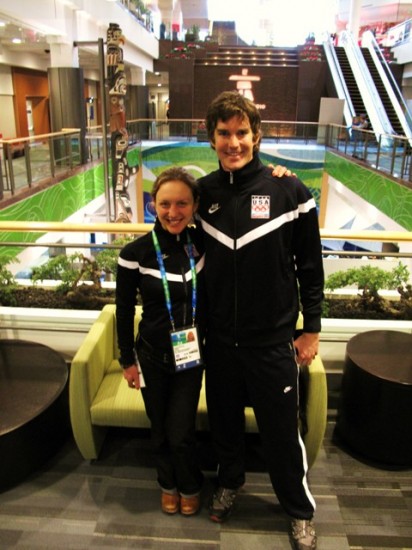 In the evening, we enjoyed a nice buffet dinner with the women’s Alpine team and Snowboarders, before getting some brief media training and listening to the “Athlete Ambassador” program, presented by Wisconsin’s own, speed skater Bonnie Blair.  The presentation was meant to get us excited about the Olympics and ready to earn some medals—like that wasn’t already the case!  The presentation was pretty cool, especially with the likes of Lindsey Vonn, Julia Mancuso, and Kikkan Randall in the room.  Even though I was exhausted after the long day, it still took a while to fall asleep with all the excitement in the air.

The alarm woke Newell and me up at 7am sharp.  While I was still a bit tired, I was also thankful that I didn’t have to get up at 5am like Kris Freeman to go on the “Today Show” this morning.  Instead, we packed our bags and dropped them off on a truck that brought all our new swag up to the Whistler Athlete Village.  While our bags were making the two hour journey to Whistler, we were making our way across town to the Vancouver Press Center for the Cross Country Team Press Conference. 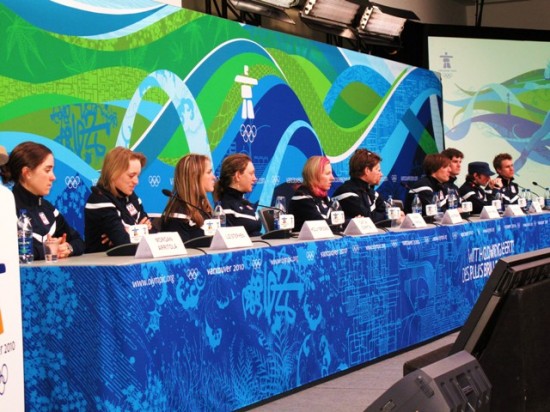 The formal Press Conference was a totally new experience for me.  Fortunately, guys like Andy, Kikkan, and Torin are pros at that and had some great things to say about our team.  Afterwards, we broke out individually and were interviewed more personally by the media—especially locals like the Star Tribune and Kare 11. 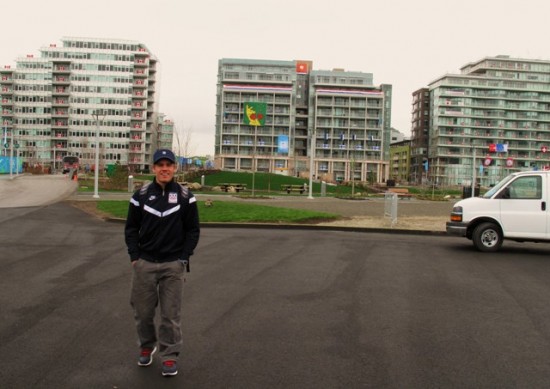 simi in the vancouver athletes village

The athlete bus runs between Vancouver and Whistler every two hours.  After the press conference, we had some time to kill before the bus ride.  We got to spend the time exploring; actually, we were mostly just eating, in the Vancouver Athlete Village.  The Vancouver Village is pretty cool, located right on the water front and consisting of a number of new high rises.  However, it doesn’t feel much like a Winter Olympic Village, as there’s no snow on the ground and the temperature is at least 45 degrees F and rainy.  I’m psyched to be staying in the Whistler Village (although I haven’t even been there yet!) as it should feel a little more like winter up there! 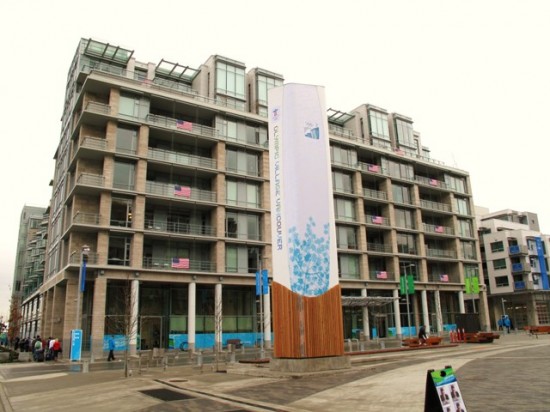 US HQ in VAV 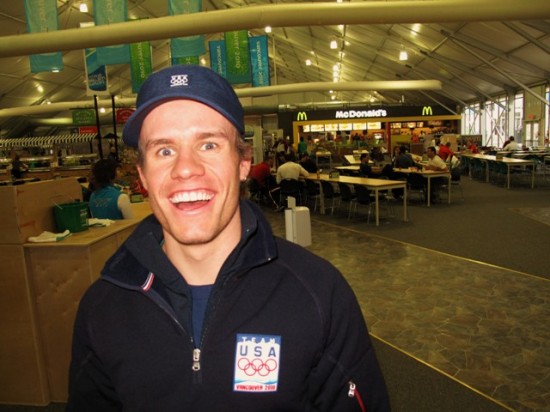 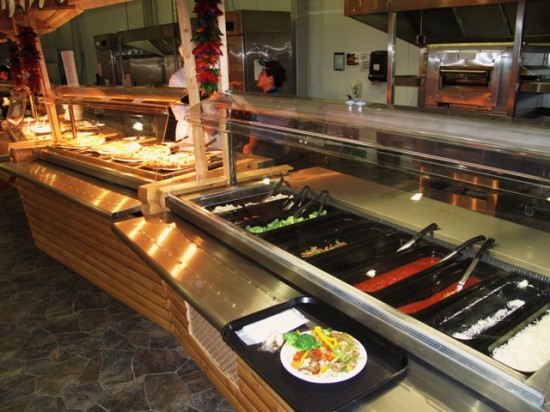 Make your own pizza in the Olympic Village.  Almost as good as the “Kuzzy” at the Ideal Market in Cable, Wisconsin.  For the next two weeks, you can buy my favorite pizza, the Kuzzy: chicken, bbq sauce, cranberries, and apple, at Ideal Market.  $1 of each pizza sold helps support yours truly.  Stop by Birkie weekend and check it out! 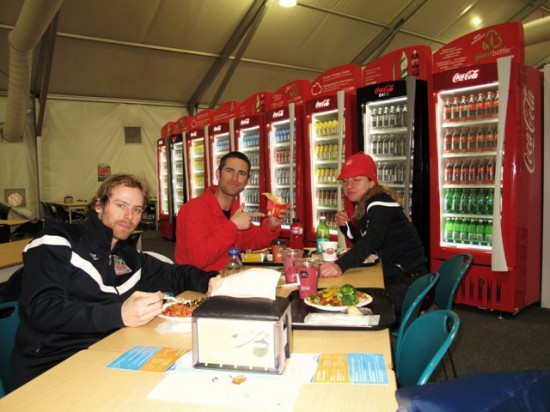 We’re riding in the bus as I write this update.  We’re about halfway between Squamish and Whistler and there are finally hints of snow on the ground! 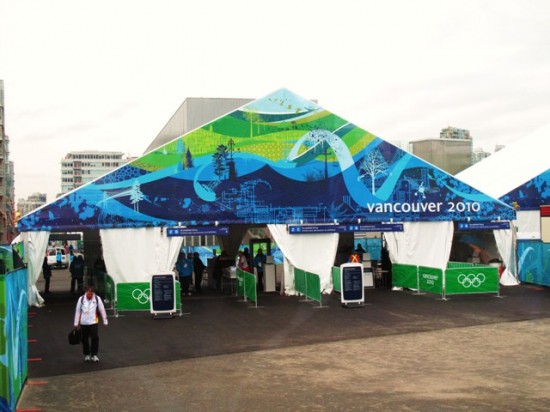 enterance, including airport style security, to the vancouver athlete village

Please remember: all images on garrottkuzzy.com are property of Garrott Kuzzy and cannot be reproduced.