Today was arguably the most exciting day at the Games, especially for the US cross country team.  Both the women and men “cruised” through the semi and into the final. 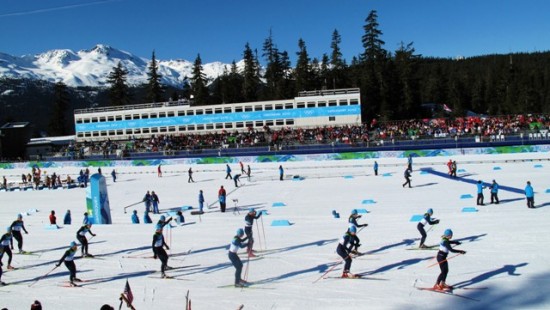 The forerunners are definitely my favorite group of volunteers at the Games.  They’ve been valiantly skiing the course before the racers, making sure everything is fast and ready to go as soon as the top skiers go out of the gates.

I’ve got a special connection with these guys, as I was a forerunner as well, back at the 2002 Games in Salt Lake City.  In fact, I’ve run into several other forerunner alumni, like Jenny Hamilton and Jenny Abraham, here in Whistler.  The forerunners have the best job, because they basically have to just ski around the course and get the crowd fired up. . .and these guys are doing a great job! 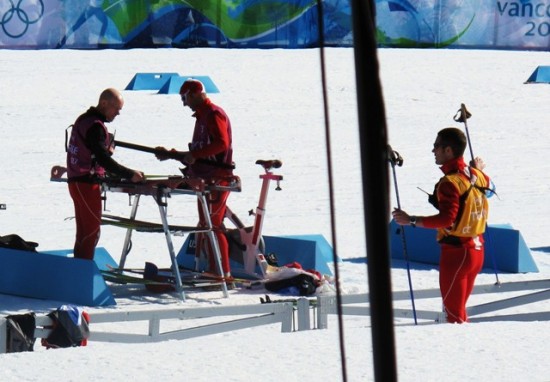 In the pits at the team sprint are our wax technicians, Peter and Joachim, working hard to keep the skis fast between relay legs.  Chris Grover stands guard with his radio and spare poles, providing tactical information and encouragement to racers during the race.  The exercise bike is for spinning to clear lactic acid between rounds.

Caitlin Compton stands ready to hammer in the A Final of the women’s team sprint.  Hat’s off to Kikkan, Caitlin, Torin, and Andy for a solid day on the trail!