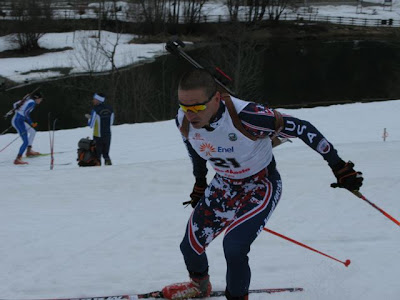 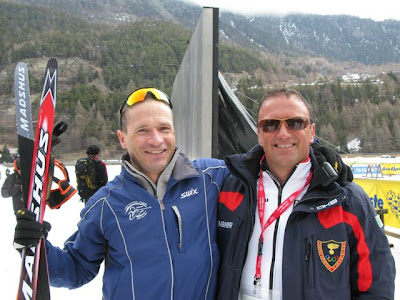 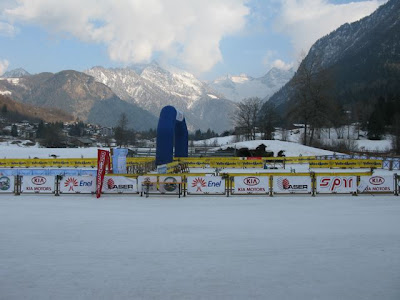 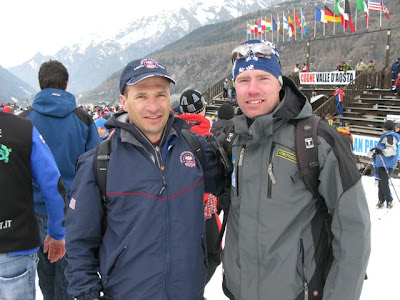 One of the Swedish Biathlon Coaches who came to our rescue and obtained race prepped skis from Swedish XC Team while enroute to Cogne. 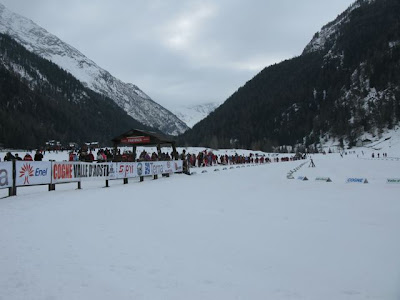 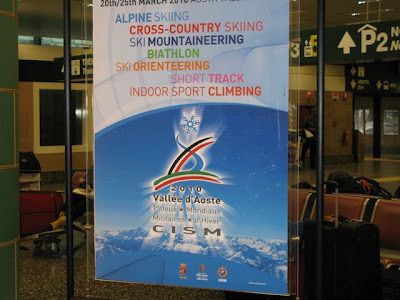 Milan Airport
This week I have the honor of being part of the US Armed Forces team at the first Military World Winter Games. We arrived Saturday went straight to the opening Ceremonies where Marco Alborello lit the flame for the games. The games are in the Val d’Aosta region with all venues in a situation similar to the Albertville Olympics. Our team is spead out in a couple of valleys. On Monday we suffered through jet lag in a Biathlon Sprint Competition won by a Norwegian.
Today we had an interesting time. It started out getting up at O’Dark Hundred gathering our gear and marching a half mile to a bus stop to wait for transportationto the xc ski venue a 1 1/2 hour jaunt down and up two treacherous mtn roads.
Unfortunately after over an hour of waiting in the dark from 5:40 fro a 5:45 pick up we retreated to the Hotel in Brusson. Our Chief of Mission as as exasperated as we were at our situaton. I was beyond angry, fuming, steam coming out of my ears.
Back to the Hotel where we conversed with some Soldiers and our Trainer found a Lady from the Organization who said no transport this am.
Off we went to breakfast then surprisingly the lady said a bus could take us and a slight chance to make start. So never giving up off we went. Joining us was a Swedish Biathlon contingent going to spectate. They joined us in laughter and anger about our exasperation. Also they felt our anguish and pain about probably missing this race.
Unbeknownst to Us On our maniacal drive down one valley then across the plain and up the next valley in record time about an hour that left almost all ready up chuck.
The Swedish Coaches called their XC Wax Technicians and arranged for us to use some of their skis and get them to the start.
Alas all was not lost, even after we drove by the start area twice we made the start with over 10 minutes to spare.
The Swedish Madshus skis were awesome. The race went well I was 4 minutes of Vittoz in 15km in the middle of a tough field.
Much Thanks and Gratitude to the Swedish Contingent and their Generosity and Caring.

"I’m going to puke all over John Morton."