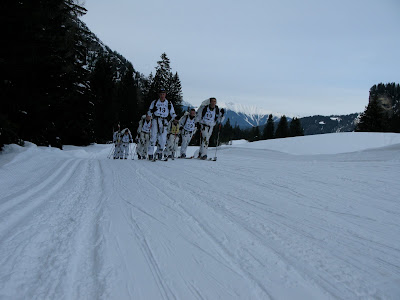 Suffering Alpiini Troops
probably a 25km ski up a valley for them. 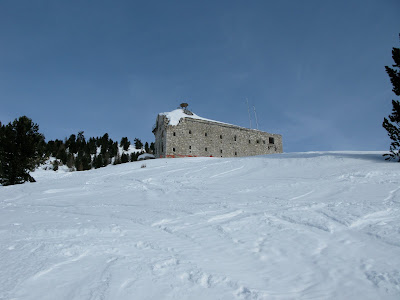 The Fort at the Top 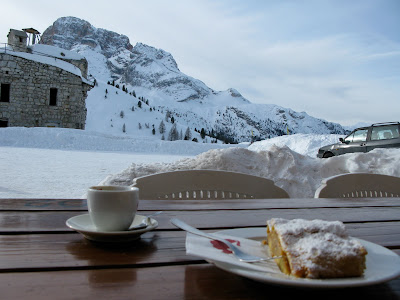 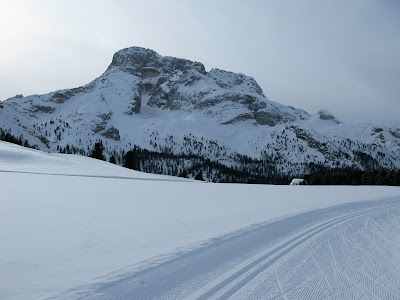 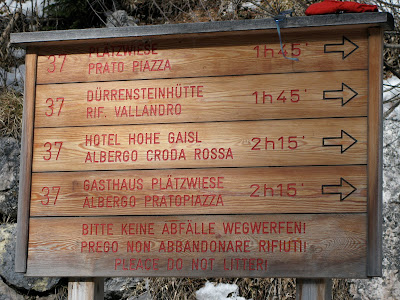 This place was my destination of the evening 3 out 5 nights while contesting the the Alpiini Ski Championships in Dobiacco, Italy. The skiing there is phenomenal. There are ski highways all over the place. One can ski till they are totally exhausted very easily. During normal operating hours one can stop along the way and have espresso and kuchen to refuel. I found out on my second journey when returning by artificial daylight that the groomer gets quite agitated upon finding crazed American skier rocking out.
This being my third trip to the the region having already made the amazing journey from Dobiacco to Cortina a few times, on my first late afternoon adventure along with the Minnesota machine when we reached the high point on the way to Cortina we crossed the road and started up the Climb to Prato Piazza. Unfortunately we turned around about a mile unbeknownst to us from the top. That was Mon Night it was getting dark and it looked like we were almost there. Still am almost 4hr ski returning in the dark with no light. THen on Wed after a 15km Mass start I went up again late afternoon, solo. Another superb classic ski toko Blue great kick. Got up to the Fort after a 4 mile climb just at dusk changed clothes powered up the NightRider artificial daylight and came back the way I came. Did not go to the exact high point was planning on a 30 mile ski the next afternoon with the MN Machine.
Thurs after Sprint relay finished fifth great performance from MN MAchine. Unfortunately I went on epic ski with al my friends. Had a blast started at nigh noon and circumnavigated the mountain’s above the venue. Stopped at the Cafe at the top and had an espresso. Then jammed across and down the other side of the pass. I thought I was getting tired until I passed those Alpiini soldiers finishing there patrol race. They were suffering.
It ended up being an over 30 mile classic ski. But it was worth it.

Poor Performance Results in Extensive Extended Altitude Training Camp: The President is sending me to classified location to prepare for what's next?