Mountain bike racing for the second week in a row!  Can’t remember the last time I did back-to-back weekends of bike racing. . .probably not since I rode my bike more than once a week.

Cable, Wisconsin hosted the Cable Classic–23 miles of bike racing on the local CAMBA trails.  After a brutal awakening to the bike season in Rhinelander last weekend (it was all I could do to make it to the finish on my bike), I decided to start this weekend’s race a little more conservatively.  It was great to be in the field with a bunch of familiar faces from the ski and bike world.  A big bottleneck at the start of the race to get into the single-track also kept me in check from going out too hard at the start.

Instead of getting dropped by everyone that passed me this week, I was able to hang on to most of the wheels in front of me and occasionally close the gap up to the next group.  From the stories afterwards, it sounds like about half the field took a wrong turn at some point during the race, but I was somehow able to stay on the right track (thanks to some reminders from the riders around me!).

In the end, I came into the finish with a pack of about five riders, giving me the chance to work on my finishing tactics (something I don’t get to work on much in individual start ski races).  It was great to be competitive at the finish of this weekend’s race, even if I did finish 12 minutes off the leaders.  Being back with the mountain bike crowd got me fired up to spend more time on the bike this summer and get back into the swing of riding. 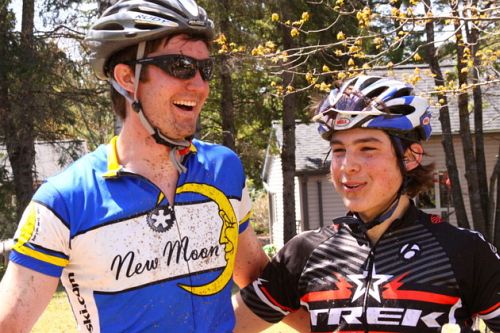 Jack Hinkens, Hopkins skier and mountain bike racer, ended up 6th after riding an extra mile going off trail in 2nd place.  He’s off to Germany to train with the US Junior National mtb team in a couple weeks. 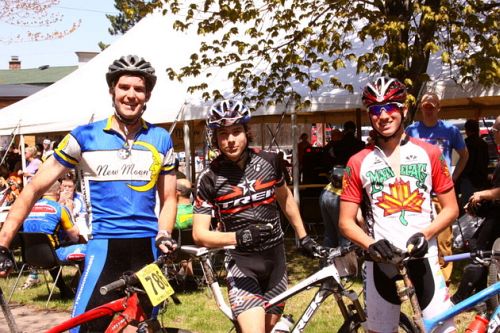 I got to catch up with two of the Midwest’s top junior racers, Jack Hinkens and Jake Richards.  Both guys ride all summer and are two of the fastest skiers in the State in the winter.  It probably doesn’t hurt that Jake has some of the best bike and ski trails right in his backyard at Maplelag Resort.

While I’m on the subject of shout out’s, I’ve got to thank New Moon for the bike once again this weekend.  Without them, I would’ve been sitting on the sideline watching the past two bike races.  One of these days, Specialized will get my bike in stock & I won’t have to race on a rental bike anymore!

One final shout?  Want to read a great race blog?  Ted King is the man.  My Middlebury Cycling teammate is riding in the Giro d’Italia for Cervelo and has some great insight and humor from inside the peloton.  He somehow finds time after racing six hours a day to punch out some classic entries on his blackberry.  Check it.

Pictures from the Week