I just finished reading a great article checking in with US biathlete Tim Burke as he gears up again for next season.  I was vaguely aware that Burke had a great season last year but a disappointing Olympics, but I don’t follow biathlon as closely as cross country.  So I thought I’d check some data and educate myself a bit.

Here’s what I’ve got of Tim Burke’s career so far: 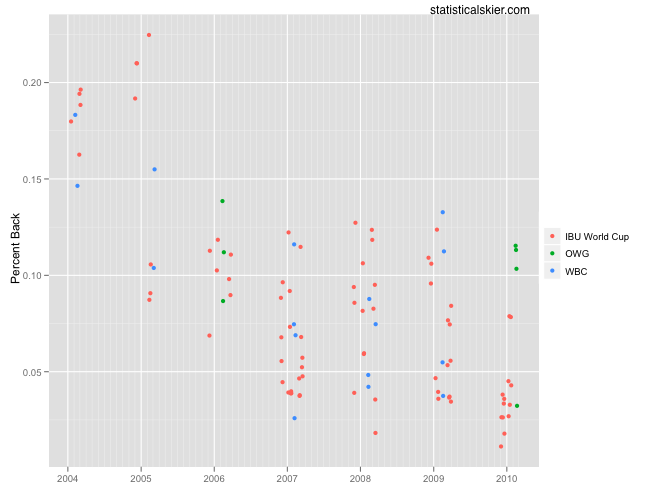 I calculated the percent back values myself, since biathlon doesn’t use a point system like FIS does in cross country.  Burke had been a decent skier for about three season and then clearly made a jump last year.  It’s also clear how much he struggled at the Olympics.  His one decent Olympic race at Vancouver was really just an average race for him over the whole season.

Burke also mentioned that apparently he has struggled with his standing shooting and so is focusing on that during the offseason.  With that in mind, let’s look at Burke’s shooting: 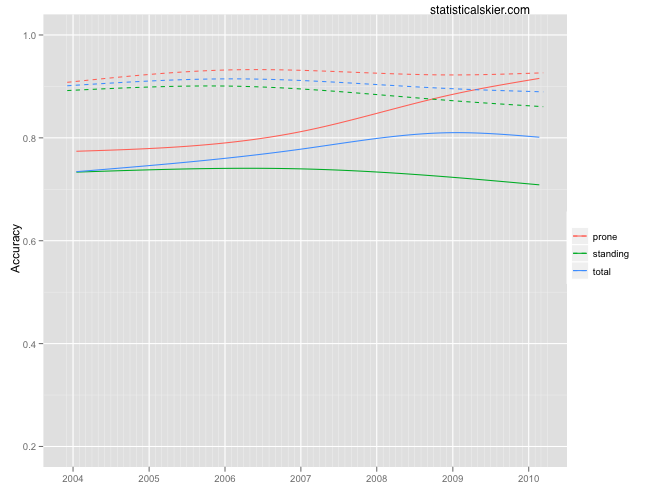 The solid lines represent Burke and the dotted lines represent male top 10 finishers over the same time period, for reference.  This paints a pretty clear picture.  If Burke improved his standing accuracy by 5-10 percentage points he’d likely make another big jump next season.  Indeed, that would probably make him regular podium finisher.  I have no idea if that sort of improvement is feasible (intuitively, it seems like a big jump to me for one off-season), but it’d be awesome to see.

Olympic Day at 'The Club'