The poll on the right is now closed.  Marit vs Justyna was in the running for a while, but Daehlie vs Alsgaard eventually pulled away for a clear win.

Don’t worry if the matchup you voted for didn’t win this time around, we’ll have another round of voting most likely in a few days.

Bjoern Daehlie and Thomas Alsgaard gave us a wonderful rivalry of sorts during the 90′s.  Let’s visualize it!

I took the 61 races I could find in which Daehlie and Alsgaard raced against each other, and simply subtracted their FIS points (Daehlie – Alsgaard).  This means that negative values represent times when Daehlie beat Alsgaard and vice versa.  Here’s a simple graph with the results: 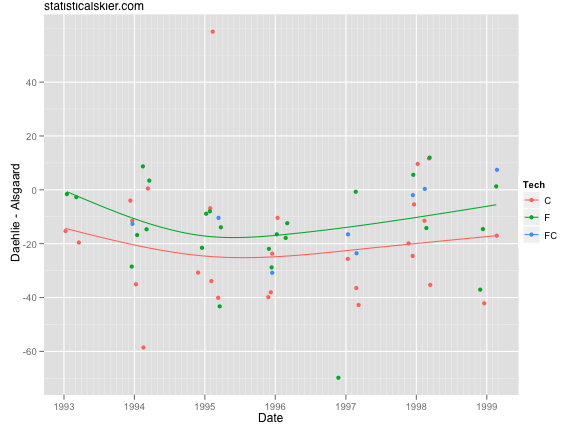 The FC technique refers to pursuit races, which at the time were all pursuits with a break (classic race, followed by skate pursuit).  So those races are actually a mix of classic and freestyle.

As we might have guessed, Daehlie had the better of this matchup: nearly all these points are below zero.  Alsgaard’s strength in skating is clearly visible when comparing the two trend lines I added for freestyle and classic races. (I skipped doing a trend line for pursuit, or FC, races.)  Alsgaard seemed to compare more favorably to Daehlie in 1994 (Alsgaard’s break though results at the Lillehamer Olympics) and then later toward the end of Daehlie’s career.  During 1995 and 1996, Daehlie was pretty tough to beat.

As with any dataset, we should at least comment on any unusual looking data.  I count three odd looking races.  Two very large victories by Daehlie and one by Alsgaard.  The lopsided Alsgaard victory came in Feb 1995 at the 50k classic in Oslo.  Daehlie was 48th.  This first lopsided Daehlie victory was actually the 10km classic race at the Lillehammer Olympics.  Alsgaard was 24th, nearly 2 minutes behind Daehlie, who won.  The second was in Nov 1996, an early season 10km freestyle World Cup race in Kiruna, Sweden.  Alsgaard was 61st.  (American skier Marcus Nash was 28th that day, ~45 seconds ahead of Alsgaard.) 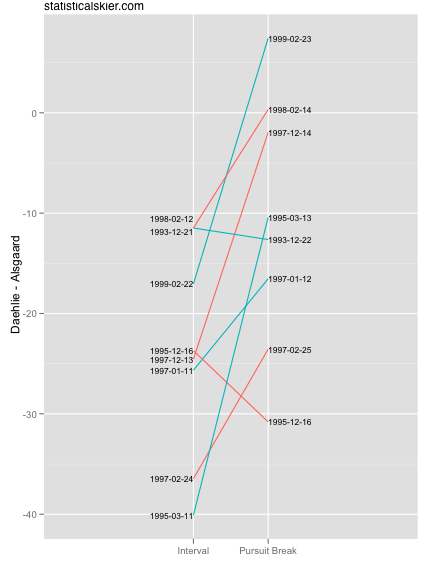 Obviously, this isn’t necessarily evidence that Alsgaard was a stronger skater.  Daehlie won the classic portion of half (4) of these pursuits, which will likely influence his strategy in the skating portion.  Namely, from Daehlie’s perspective, he only needs to ski faster than the guy behind him.  So we won’t much care if other people further back are gaining ground.  On the other hand, in each case Alsgaard closed the gap significantly three of the four times.

The Best Dog in the World

What Do You Want to Read? What Should We Write?