Next up in our retiring skier series is Sara Renner.  Renner (CAN) retired this past season after competing internationally for around 16 years.  She earned a  Silver medal at the Turin games in the Team Sprint event with Beckie Scott, but wasn’t quite as fortunate in individual events. (Update: Sorry for the typo!)

However, along with Beckie Scott and Kikkan Randall, Renner has been among the best North American women competing on the World Cup circuit in recent history.  She’s managed 5 podium finishes, including a third place in the sprint race at World Championships in 2005.  Her best distance race probably was a 2nd place finish at the 10k classic World Cup race in Davos in 2006.

Let’s take a look at all of her distance results: 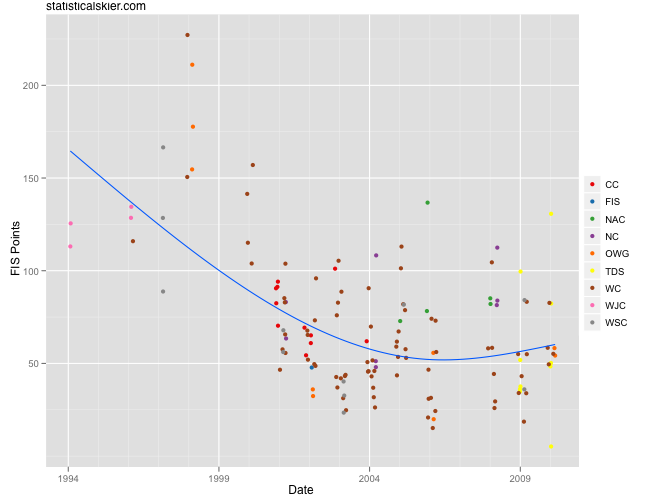 We see a small number of races prior to 2000 and then a huge jump between 2000 and 2001.  After that, she remained fairly consistent (at least in terms of her “average” race) but her best results each season improved fairly steadily through 2006.

That season was easily Renner’s best overall.  The Tour de Ski (TDS) result in 2010 that looks very fast is slightly deceptive.  That was a 10k mass start classic race that we’ve discussed before that resulted in an extremely bunched finish.  Renner got around 5 FIS points for a 14th place finish that day.  I suspect the stage race format of the TDS played a significant role in race tactics that day.

After taking a year off following the Turin Olympics, Renner’s average results have remained roughly steady, but her best races have tailed off somewhat.  One notable exception is the World Cup race in Feb 2009 where she finished 5th (another 10k classic race).

Did she have a preference for skating or classic? 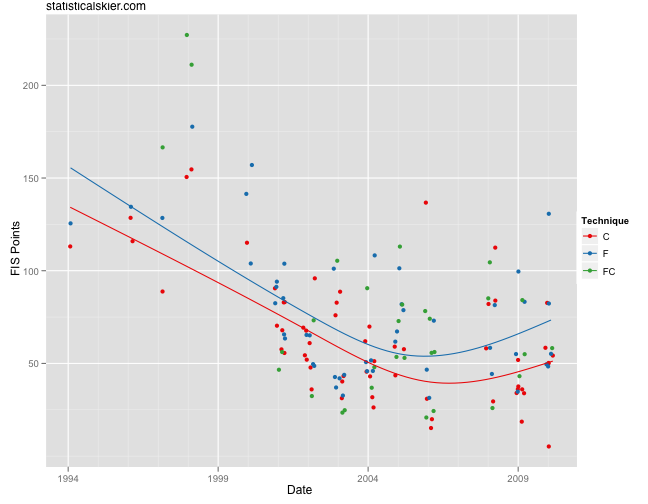 The trend lines suggest only a slight edge for classic skiing here, but I think that might be understating the difference slightly.  With the exception of some pursuits (FC or green dots) Renner’s best races seem to trend towards classic events.

Now let’s see if she had any strong preferences for races of different lengths: 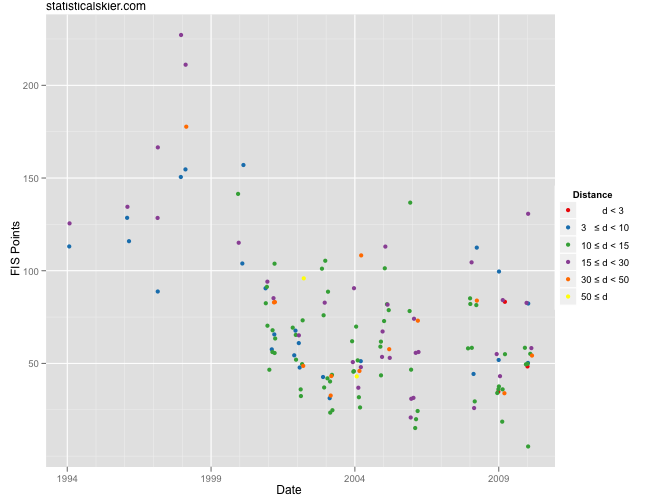 It’s not overwhelming, but I’d tend to call that a preference for shorter races.  She didn’t do a ton of 30k’s, but when she did, they weren’t often her best races.  This might suggest, along with her Silver medal in the team sprint, that she was more of a sprint specialist.  Let’s check out her sprint results… 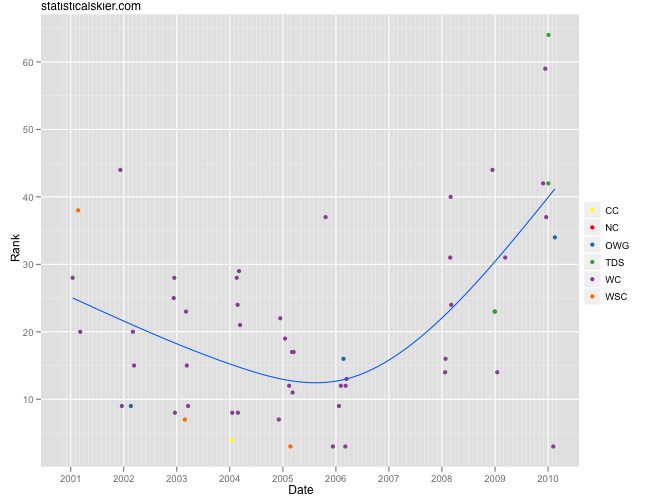 From 2002 to 2006 she was a fairly regular top 10 finisher in World Cup sprints, and virtually always qualified for the elimination rounds (top 30).  Like her distance skiing, her sprint results have generally tailed off somewhat over the past few seasons, though she managed to put a good race together at the Canadian World Cups just prior to the Olympics this past season.  Let’s look to see if she also had a preference for classic in sprint races… 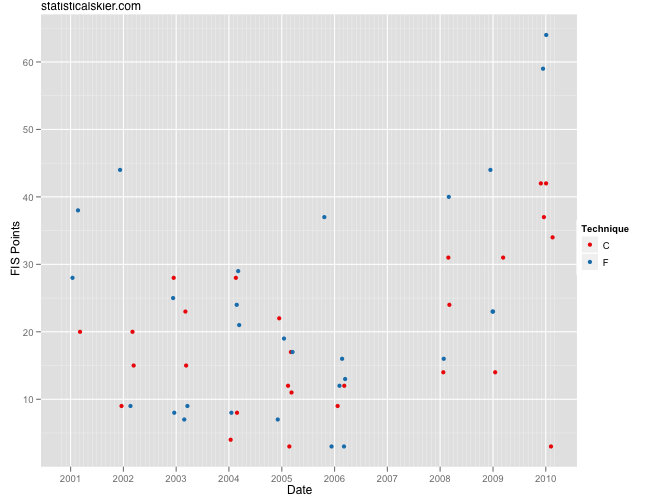 Somewhat surprisingly, I’d say the answer is no.  Her best sprint races are pretty much evenly split between classic and freestyle.

So long, Sara, and good luck!