A far less cheery topic than skier improvement is, well, the opposite.  Lacking a better term, I’m sticking with “unimproved”.  That’s not technically accurate, since I’m actually looking at skiers who went considerably slower year to year.  But I feel bad enough pointing out trends like these, no need to add gratuitously insulting terminology to injury.

You know the drill by now: these skiers had the biggest drop off in FIS points in their five best races between the ’08-’09 and ’09-’10 seasons.  Here’s the table:

There are some familiar names here.  Veteran skiers Martin Koukal and Jaak Mae stand out, of course.  Estonian Jaak Mae has been skiing for, well, quite a while.  He’s nearly 40!  So I think we can forgive him for not always kicking butt on the ski trails.  Emmanuel Jonnier is also a veteran skier, he’s ~35.  Let’s look at the all the distance results for each of these skiers to get some perspective (click through for a larger version): 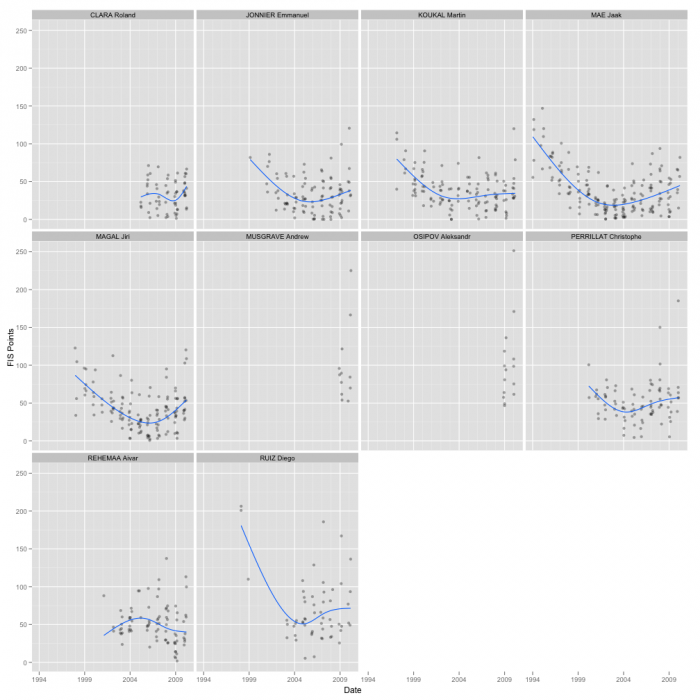 Like I said, Koukal and Mae have had long careers.  Koukal has never been a truly dominant distance skier, but he’s had the occasional season with some exceptional results.  ’08-’09 happened to be one of those seasons, so it’s not surprising that ’09-’10 was quite a bit worse in comparison.  Still, I wonder how many top results Koukal has left in him.  Will he continue to chug along between 20-40 FIS points for another few season, or was ’09-’10 a sign of the future for him? Mae certainly peaked between 2001-2004 and has fallen off since then.  He still pops the occasional top result from time to time, but his typical results are sliding backwards.

Jiri Magal is another relative old timer who seems to be at the tail end of his career.  Roland Clara has been fairly consistent, although last year was a bit off for him.

Scottish skier Andrew Musgrave and Kazakh Aleksandr Osipov stand out as newcomers.  Both have only been skiing on the World Cup for two seasons, and their drop off last season was mostly the result of one or two bad races.

Aivar Rehemaa had an off season last year, but that sort of decline is not quite in line with his general trend.  He had an excellent, perhaps unreasonably good, season in ’08-’09, so it’s not surprising that he might regress back to his previous performance level.

Because a skier would get all ninja time on that snake.