Now for the women who had rough seasons in 09-10.  Once again,  a quick reminder, we’re looking at changes in the average FIS points of a skier’s best five (distance) races between just these two seasons.

Below is the top ten table:

Our winner, French skier Coraline Hugue had some promising seasons in 07-08 and 08-09, but then had some really terrible races in 09-10 it looks like.  Perusing her website, it appears she’s had some injury problems lately, so here’s hoping she can bounce back.

On the other hand, Tatjana Mannima (EST) appears to have had a series of increasingly bad seasons of late.  Many of the other skiers on this list are seasoned veterans who are presumably near (or in Sara Renner’s case, at) the end of their careers.  Kuitunen is a notable example here, going from dominating the World Cup in 08-09 (and earlier) to, well, not so dominating.  Rajdlova, Muranen, Kuenzel-Nystad and Renner are all verteran World Cup racers experiencing some measure of decline.  Renner, I believe, just retired.

The other skiers aren’t particularly new, rather I’d say they are all mostly mid-career, but heading in the wrong direction (at least lately).  Daria (does she prefer Dasha?) Gaiazova is a curious addition to this list.  Technically, she had more bad races in 09-10 than in the previous season, which shows up as a net loss for her, but if you look at all her races, her top result each season has been steadily improving.

You can pore over the details yourself in the graph below showing each racer’s results (click through for a larger version): 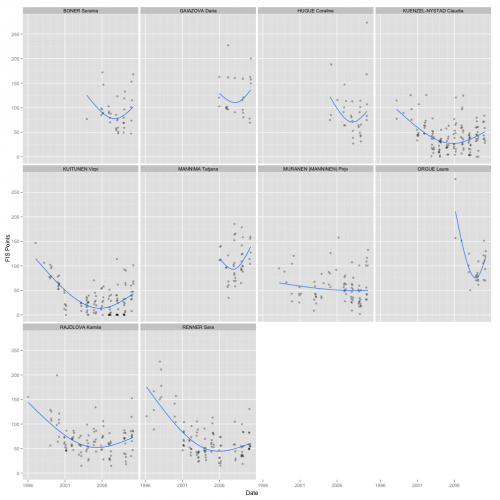 Note that since I dropped that very bizarre Tour de Ski 10k classic mass start race in the “most improved” post, I also omitted it here.  That is, I omitted it from this last graph; the “most unimproved” list was calculated including that race, it just didn’t end up helping any of these ladies much overall.

As before, there’s a fair bit of variation in how we can see a skier regressing from one season to the next.  Sometimes their best five races move backwards across the board (e.g. Hugue, Muranen), sometimes a skier has one or two good results but most of the rest of quite a bit slower.